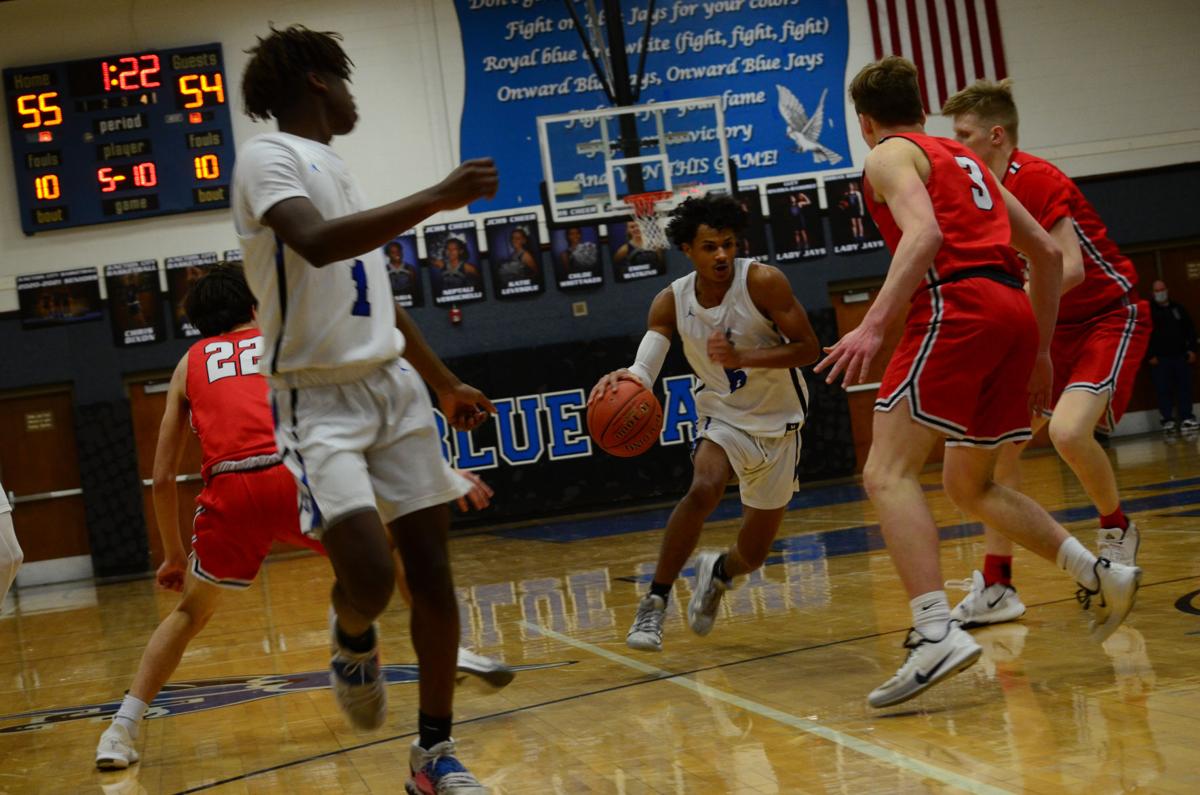 Senior Javon George works his way around a couple of Emporia defenders in Junction City’s 60-54 overtime win at home on Thursday. 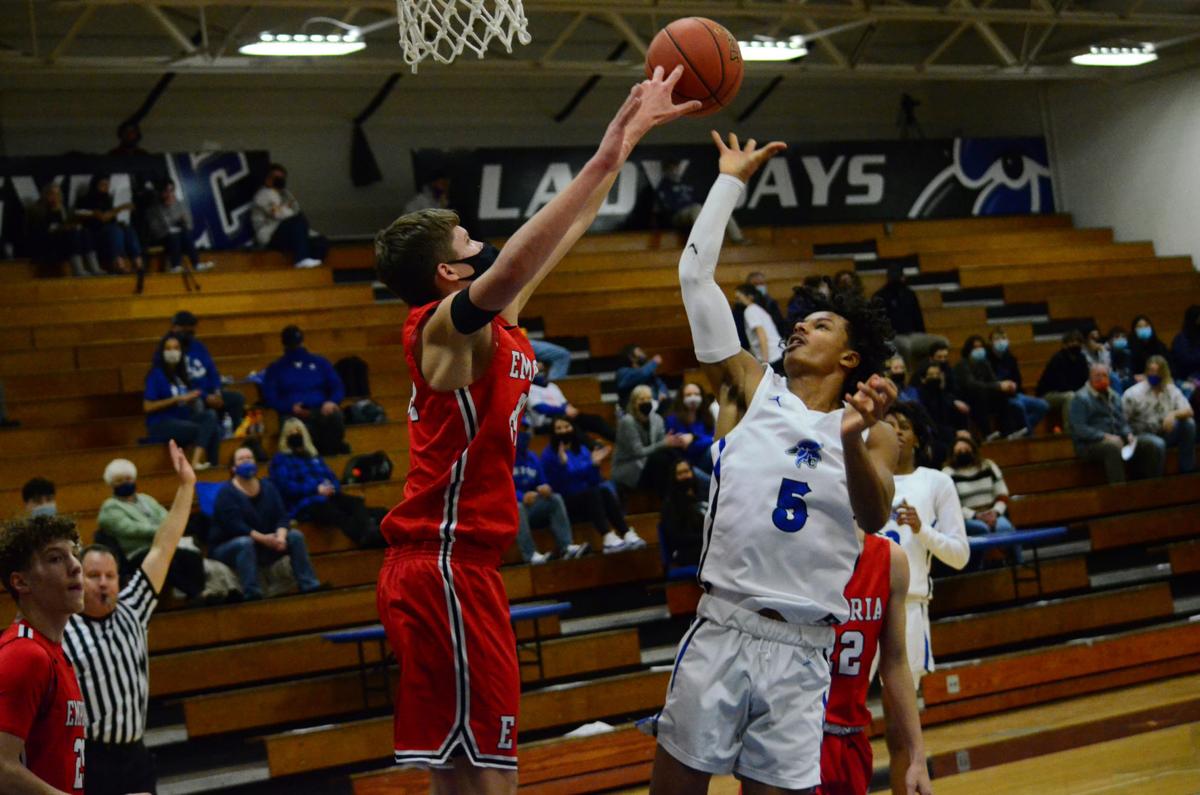 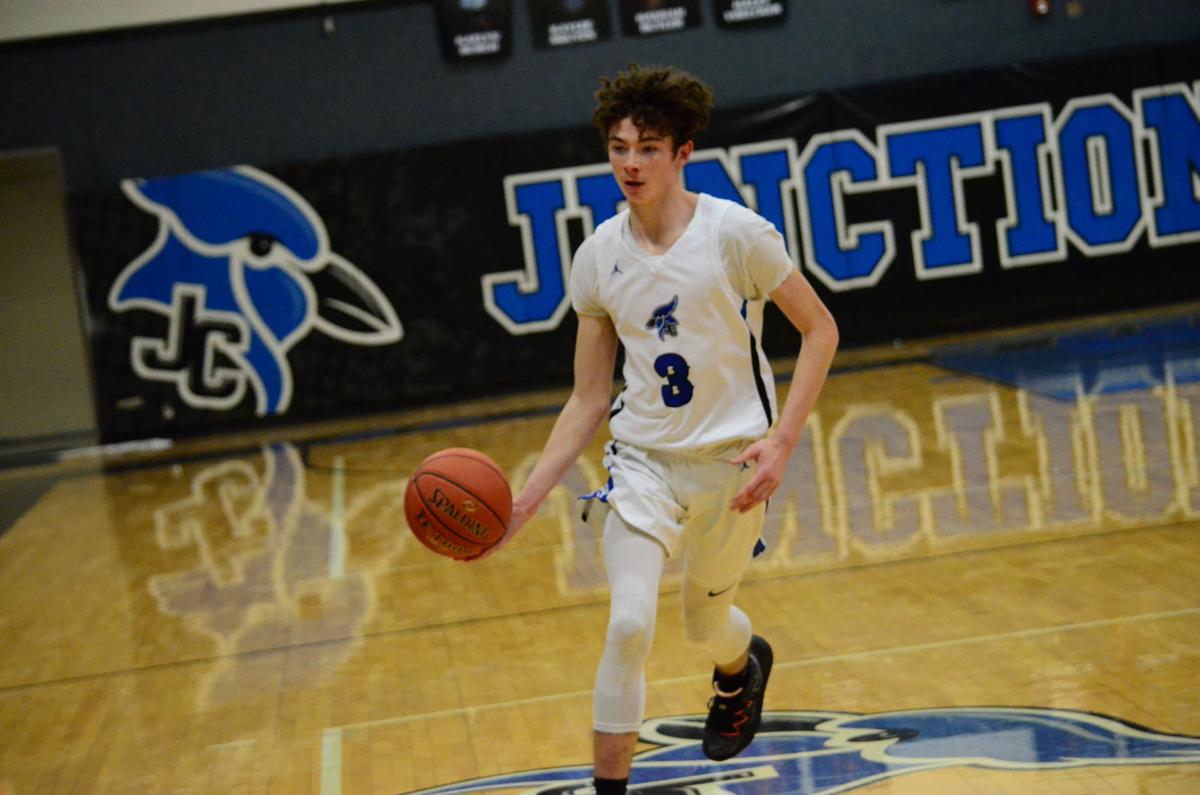 Junior Seth Clark takes the ball down the court in Junction City’s 60-54 overtime victory over Emporia at home Thursday night. 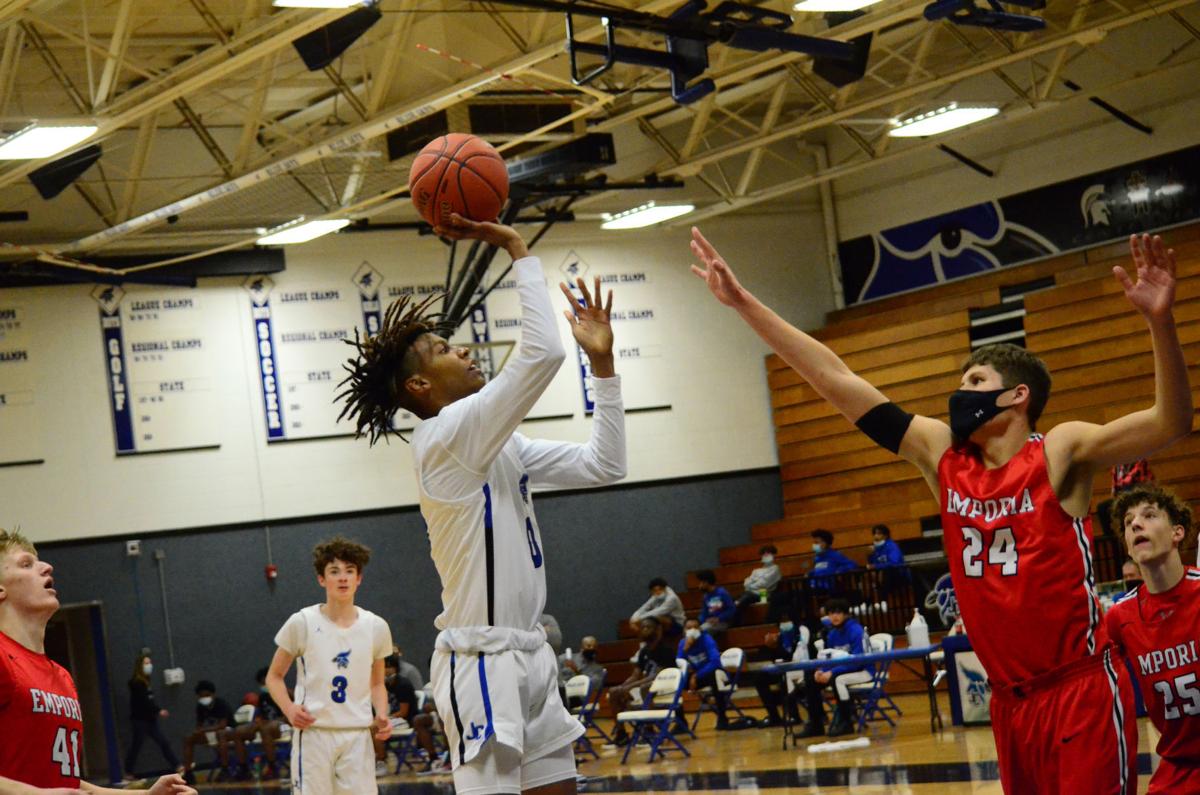 Senior Javon George works his way around a couple of Emporia defenders in Junction City’s 60-54 overtime win at home on Thursday.

Junior Seth Clark takes the ball down the court in Junction City’s 60-54 overtime victory over Emporia at home Thursday night.

Defense, toughness and tenacity made the difference Thursday night in Junction City’s 60-54 overtime win at home over Emporia. The win moves the Blue Jays to 8-9 this season.

“I think we were pretty resilient,” head coach Nick Perez said. “We had a lot of things go wrong for us in the first half offensively and defensively we were letting shooters get loose and obviously (Emporia forward Charlie Snyder who led all scorers with 21) is a great player. We really turned it around and played well.”

The win splits the series with the Spartans after the Blue Jays lost by eight early in the season.

“At Emporia we were up by 10 twice and we let it slip away,” Perez said. “But tonight we anchored down and defended and that made the difference.

The game was tight all of the way down the stretch as neither team managed to carve out more than a four-point lead.

Things looked like they might turn sour late in the fourth quarter as a 5-0 run gave Emporia one of the larger leads that either school managed to produce all game after Junction City had tied things up at 38.

The Blue Jays stopped the run and held pat at a two-possession deficit until junior Howard Johnson, who led all JCHS scores with 16 points, nailed a clutch three off a big assist from senior Javon George to cut the lead to just a point. Junction City fouled immediately after and ran into some good fortune as Emporia hit only one of their two free throws, pushing the lead to two.

Blue Jay junior David Rowell went to the line after being fouled before a shot on Junction City’s next possession and missed the front end of a one-and-one. Two Emporia players went up for the rebound, knocking the ball loose which allowed senior Chris Dixon to clean things up, getting the easy putback to tie the game with just seconds left in regulation.

“And we gave up a free throw rebound in the first half and we talked about how we can’t let those little things happen,” Perez said. “I think we did a great job in the last four and a half minutes of the game, We just anchored down and guarded and that allowed us to stay close and eventually tie it up. I’m just proud of the way we fought. We could’ve quit when that went on that little run. We had some bad offense and a couple of iffy things happened to us but we just battled through.”

Emporia had a shot to win the game at the buzzer but it bounced out and the Blue Jays headed into their third overtime of the season (the two previous games being wins versus Topeka-Seaman and Topeka-Hayden).

“They got a good look at the end of regulation and missed,” Perez said. “And I told myself, okay, we just need to go score here and it will kind of be, not a backbreaker but it might get them worried and we ended up getting a bucket.”

The shot, a wide-open short corner jumper by Johnson off an excellent pass by George, was the last bucket in the game as it was free throws all the way out as Junction City outscored Emporia at the stripe in overtime 7-3 to seal the win.

In addition to Johnson’s 16 points, Dixon had 13 and junior Seth Clark rounded out the double-digit scorers with 12.

The Blue Jays will be back in action at home again tonight when they host Topeka-Highland Park, a team they narrowly beat by two earlier this season in Topeka, for Winter Homecoming. The boys will tip-off 30 minutes later than usual (7:30 p.m.)

“Getting this one is good for us just because it gets that heavy weight off our back,” Perez said. “Multiple times this season, we’ve had opportunities to get wins and we haven’t done it. Now we have a Highland Park team that’s really good on Friday. It’s going to be a challenge for us but hopefully feeling a win, seeing a win and getting that excitement back will help us get going again.”