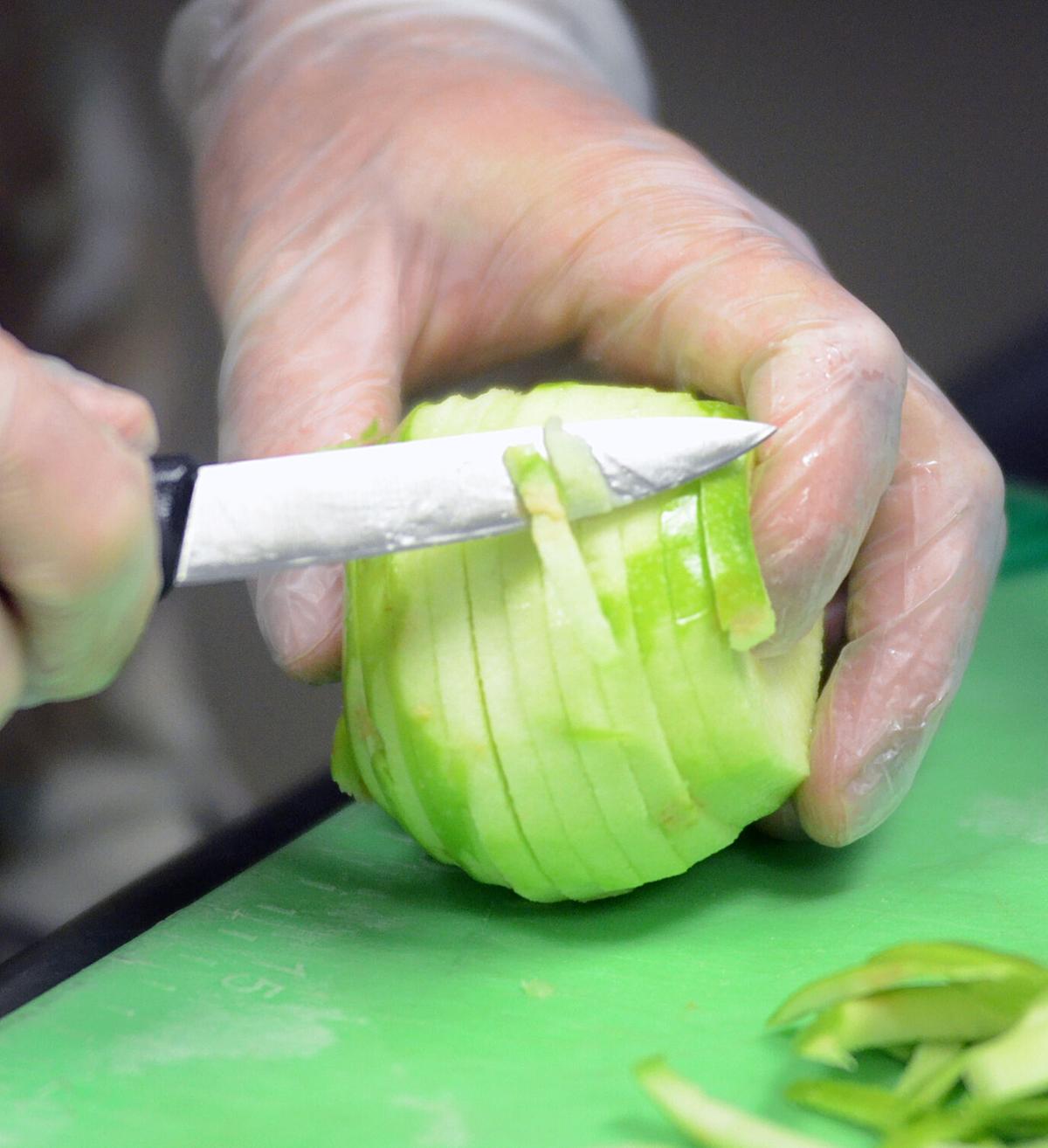 An apple’s skin reminants are sliced off by Command Sgt. Maj. Timothy V. Speichert, U.S. Army Garrison Fort Riley senior noncommissioned officer, Wednesday. Speichert’s quality control showed the dedication the volunteers had to ensure each of the more than 500 apple pies made were of the best standards to live up to Libbie Custer’s name. 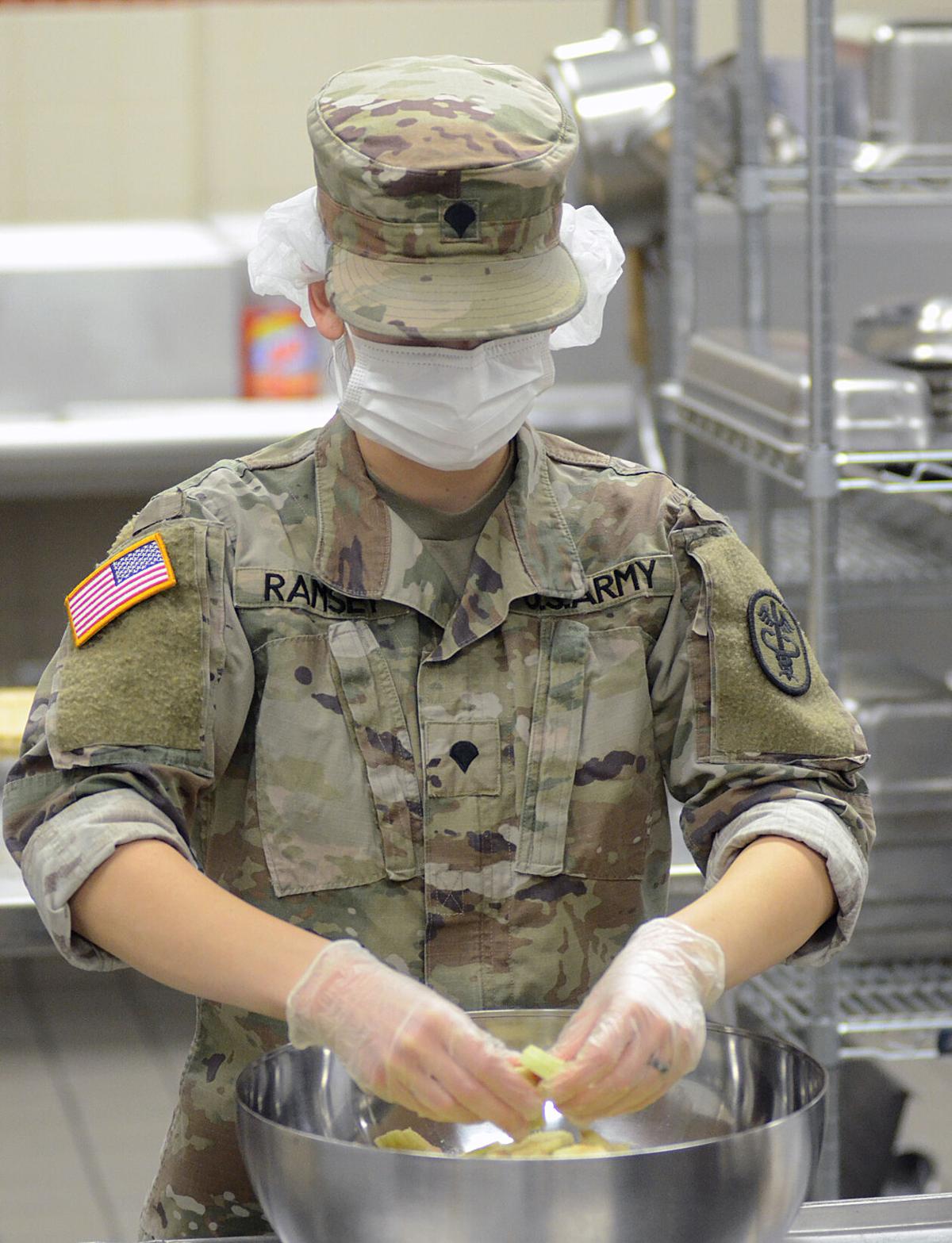 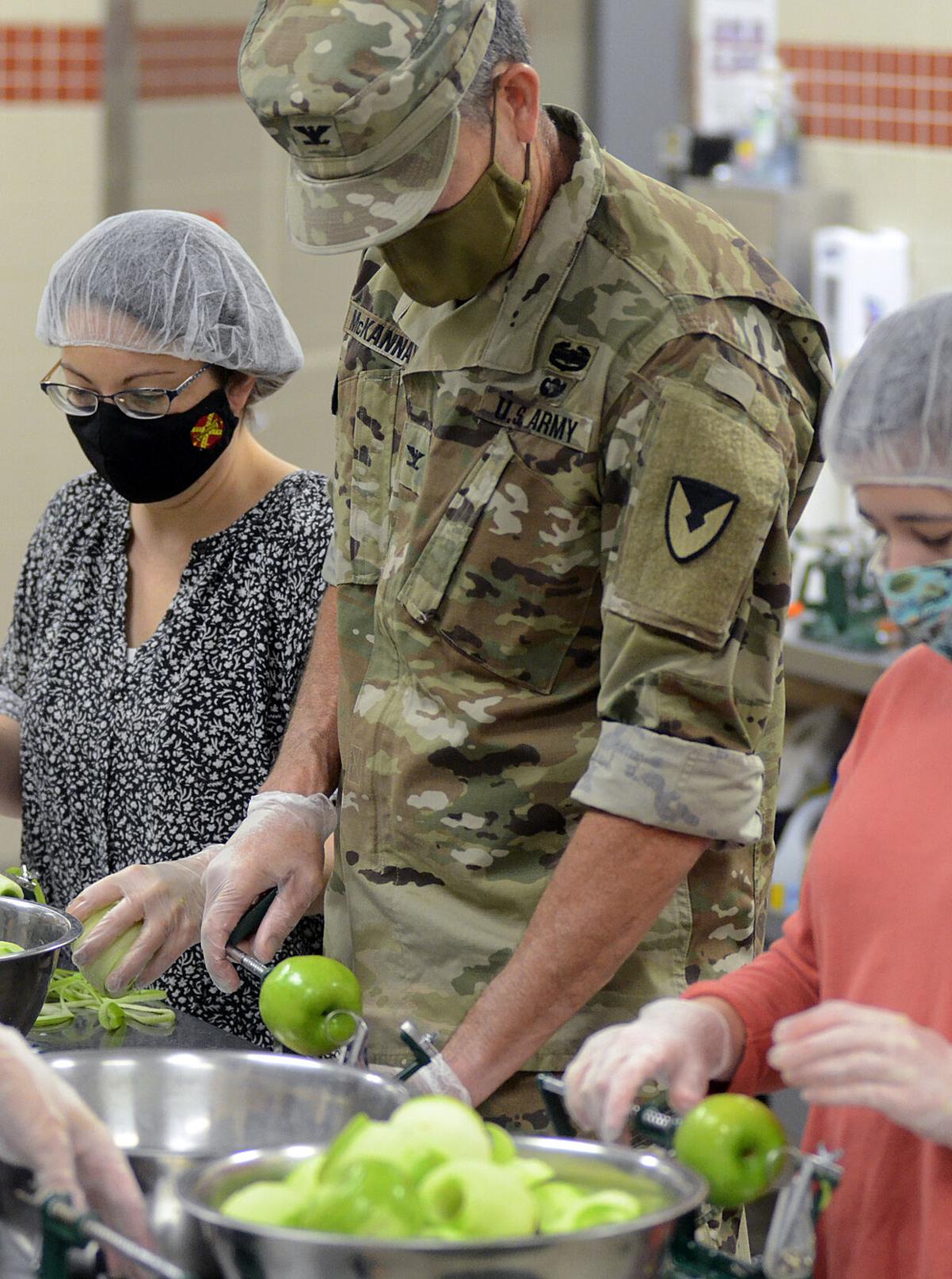 Col. William B. McKanney, U.S. Army Fort Riley Garrison commander, works with volunteers Wednesday peeling apples in the second step of many to prepare more than 500 apple pies for the 2020 Fall Apple Day.

An apple’s skin reminants are sliced off by Command Sgt. Maj. Timothy V. Speichert, U.S. Army Garrison Fort Riley senior noncommissioned officer, Wednesday. Speichert’s quality control showed the dedication the volunteers had to ensure each of the more than 500 apple pies made were of the best standards to live up to Libbie Custer’s name.

Col. William B. McKanney, U.S. Army Fort Riley Garrison commander, works with volunteers Wednesday peeling apples in the second step of many to prepare more than 500 apple pies for the 2020 Fall Apple Day.

More than 2,000 pounds of apples were washed, peeled, cut and seasoned before being placed into pie plates the last few days on Fort Riley as members of the Historical and Archeological Society of Fort Riley assembled more than 500 apple pies following the 100-plus year old recipe of Libbie Custer, wife of famed Col. George Armstrong Custer of the 7th Cavalry.

The brigade of volunteers was led by Kristen Jopling and Katina Jackson — the 2020 Fall Apple Day Pie Queens.

“It definitely takes a lot of people in this kitchen to keep things running smoothly,” said Jopling, wife of Lt. Col. Joshua Jopling, 1st Infantry Division and Fort Riley Inspector General. “We're so thankful for the people at Fort Riley and our community for stepping up this year.”

In the kitchen Wednesday, along with Jopling and volunteers, were Col. William B. McKannay, U.S. Army Garrison Fort Riley commander, and Command Sgt. Maj. Timothy V. Speichert, U.S. Army Garrison Fort Riley senior noncommissioned officer. The duo were peeling and cutting the apples at two of the stations before the apples were coated with seasoning and assembled behind them.

“Today is just a great opportunity really to show appreciation to the Historical and Archaeological Society of Fort Riley and the ladies that volunteer there and that are volunteering today,” McKannay said. “And also to just see what goes in behind the scenes of the making of Libbie Custer's apple pies. We couldn't make as many this year as in previous years, but the sales ... definitely we sold all that we intended to sell. And I think, it's just great to be part of today, building up to this Saturday. I'm really honored and excited to have the opportunity.”

Between the laughter at the tables and the many conversations taking place the pie queens controlled many things in the assembly — namely the secret recipe that people have been trying to get ahold of for years.

“It’s a really big responsibility,” Jopling said. “There's several people who have tried to get the recipe over the years. However, we are very secretive about it and we have our secret ways of keeping it under wraps.”

Keeping the tradition going this year with COVID-19 cancelling many things in the community and state was important as it “brings our community closer together.”

The 2020 Fall Apple Day Festival was scheduled to take place Oct. 3, on the Artillery Parade Field in Historic Main Post with demonstrations, military equipment, simulators, historic characters and more. Due to the COVID-19 pandemic Fort Riley senior leaders were forced to scale back the festivities and introduce a different, virtual, way to showcase what the men and women of the 1st Infantry Division and Fort Riley do to preserve freedom and democracy.

“It was a very difficult decision, a difficult recommendation for me to make to Maj. Gen. (Douglas A. "DA") Sims, our senior commander, and a difficult decision for us to make together,” McKannay said. “But, we knew that it was the right decision. And what we did not want to do was 2020 to be the year that we did not do Fall Apple Day Festival. So, really I like to give credit to the team, my operations team and division operations team and everybody here on Fort Riley, for coming up with a tremendous plan for us to go forward virtually.

“I think, maybe not a better version of Fall Apple Day, but certainly an excellent version and something that has never been done before,” he added. “So, you know that and you're gonna see a lot of things that they wouldn't see it a traditional Fall Apple Day. So I think, it's just a way to do it and we're really excited. And, we'll be able to share it with everybody in the region and also their friends and families that live thousands of miles away all across the country will be able to enjoy all Fall Apple Day this year.”

The 2020 Fall Apple Day Festival will combine live stream events throughout the installation with pre-recorded segments from both Fort Riley, the National Training Center at Fort Irwin, California, and from the Republic of South Korea where members of the 2nd Armored Brigade Combat Team, 1st Inf. Div., are currently deployed on rotation to train with partner soldiers from the Korean army. The live-stream will begin at 11 a.m. Saturday on the Fort Riley Fall Apple Day Festival Facebook event page, www.facebook.com/FortRileyFallAppleDay.

“You'll be able to see the traditional cavalry demonstration by the Commanding Generals Mounted Color Guard and there are demonstrations, military equipment demonstrations and walkthroughs and expert explanations of services from all of our installation offices,” McKannay said. “Some of the things we couldn't do that we've done in the past like the hands on events for the spectators because of the COVID environment. We couldn't ensure the safety of the spectators and that was really important to us. But we're going to demonstrate a lot of those things on recorded videos or live. We brought in live feeds and recorded videos from our troops at NTC and from the 2nd Brigade in Korea. So there's some things that are going to be different.”

McKannay said the soldiers downrange were excited to get the opportunity to still be involved with the festivities on Fort Riley thus giving family members a chance to see them before returning home over the next several months.

The online portion is not the only activity taking place. The HASFR members will be at the Custer House, 24A Sheridan Ave., giving tours, signing up new members and selling apple pie by the slice with ice cream. There will be a limited supply of whole apple pies available, Jopling said, but a majority were pre-sold online. Those who ordered online through the HASFR website can pick their pie(s) up Friday at the Marshall Army Airfield Dining Facility, 813 Marshall Dr., from 9 a.m. to 1 p.m. and again from 6 p.m. to 9 p.m.

Jopling said the apple pie assembly wouldn’t have been possible without the steady group of volunteers and the many community partners that donated to the success this year.

“I'd also like to just say thank you so much to the donors in the community that made this happen,” she said. “We had a lot of people from the Chamber of Commerce in Manhattan and Junction City, give to the historical society to make apple days happen. And, we couldn't do it without them. So, thank you donors and volunteers that have contributed to this, this year.”