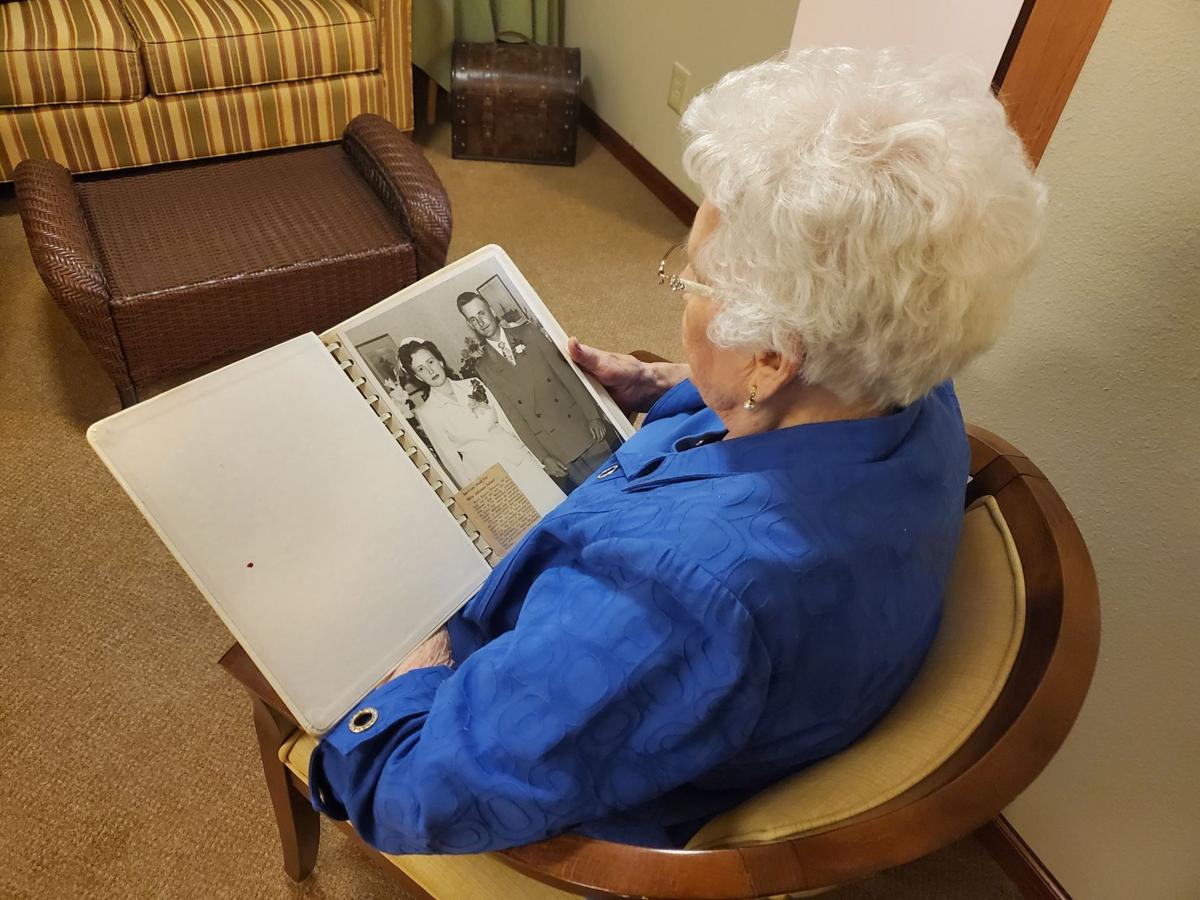 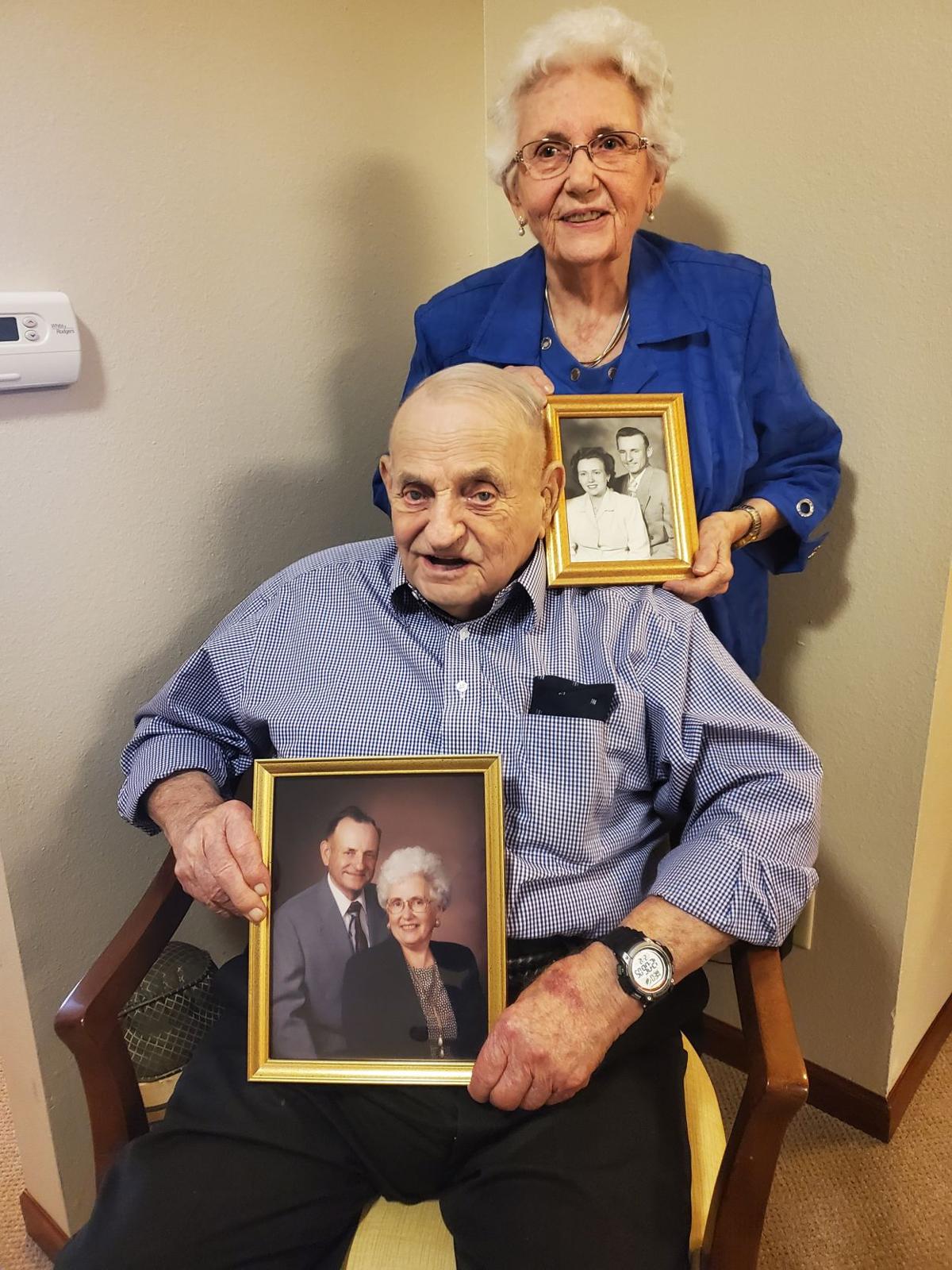 Milo and Muriel Johnson, who make their home in Junction City at Brookdale, have been married for 69 years. Milo holds a photo taken for their 50th anniversary and Muriel holds one of their wedding photos. 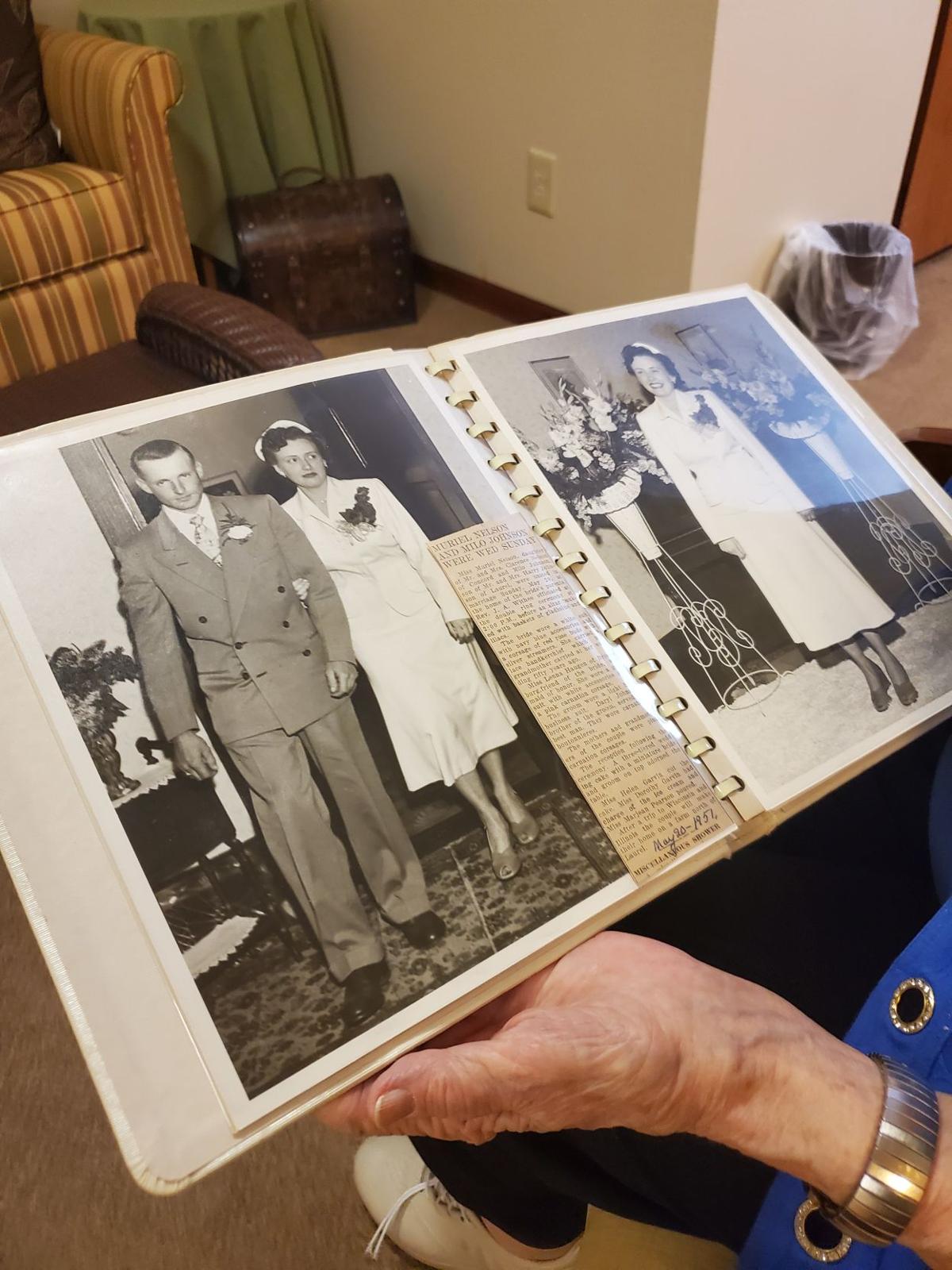 Milo and Muriel Johnson, who make their home in Junction City at Brookdale, have been married for 69 years. Milo holds a photo taken for their 50th anniversary and Muriel holds one of their wedding photos.

After 69 years of marriage, Milo and Muriel Johnson are still going strong. They live at Brookdale in Junction City these days, but in their younger years the couple lived in the far northeast corner of Nebraska.

Muriel’s memories are as strong as ever and she still recalls how they met all those years ago, in the late 1940s.

She was a college student in Wayne, Nebraska, she said, studying to be a teacher, but also learning to dance by taking part in what she calls “hour dances,” which she attended with her mother by her side.

“I had been going every Tuesday for an hour and dancing,” Muriel said.

Participants danced to popular songs played on a Nickelodeon — an old-fashioned jukebox that took nickels — for an hour, filling it up with coins.

At one of these, a young man — Milo Johnson — asked her to dance.

She agreed, warning him that she was just learning.

Milo didn’t mind that and the two danced together.

After they parted ways, they didn’t see each other again for a year.

It wasn’t that they wouldn’t have liked to, but winter laid the snow thick on the ground in the winter of 1949. A terrible blizzard left them with snow piled up the the sides of the hog shed so the pigs climbed up to the roof and ate the shingles, Muriel said. She recalls drifts so deep they buried telephone poles. People had to dig tunnels through the snow using nothing but shovels, Muriel said, in the days before snowplows.

The roads were largely impassible. Muriel was still in school, at Nebraska State Teachers College at Wayne. Her future husband was farming 25 miles away. Though she had access to a telephone, he did not, so they couldn’t very well talk on the phone.

Eventually, according to Milo, the government deployed bulldozers to cut paths through the snow. One of them showed up at his family’s farm, he said, and plowed a path through their field. Family members were so grateful to have the path cleared that they invited the bulldozer driver in to have coffee and something to eat.

The paths allowed them to travel the 10 miles into town for supplies, he and Muriel recall.

Muriel, too, was snowed in at college for months.

“You couldn’t even get to where I lived because the roads were so bad,” she said.

So the snow put their future romance on hold.

About a year later, however, Muriel met Milo again and this time he asked her out on a date.

Milo was a bachelor — he lived alone. He was a shy young man — bashful, he said, though he somehow worked up the nerve to ask Muriel on a date.

He’s still not sure where he found the courage.

“She’s the best thing that ever happened to me,” Milo said.

“He tells me that on a regular basis,” Muriel added.

Dating was simpler back then, Muriel said, largely because they didn’t have anything elaborate to do.

They attended movies, they went to the skating rink, danced, and they spent time with other young people such as themselves, playing cards and engaging in other simple activities. Muriel recalls visiting Milo’s married brother.

In the meantime, she found a job as a teacher. Her job pulled her away from Milo and from her family, but they spent time together on the weekends.

“it was a lonely year but a very interesting one,” Muriel said. “I enjoyed teaching.”

After about two years of dating, the couple had a small wedding in Muriel’s parents’ house with their immediate families and a handful of Muriel’s friends, who helped serve the wedding lunch. The minster from Milo’s home church traveled to the ceremony to officiate because Muriel’s church did not have a minister, she said. Her mother baked the cake herself.

“Some of our friends had nice, big weddings, but I didn’t care to do that,” Muriel said. “Milo didn’t either.”

They didn’t see as much fanfare was necessary, she said.

“We’re just as married as somebody that had a real fancy wedding,” Muriel said. “So I never let that bother me a bit.”

On their 25th wedding anniversary, he bought her the diamond ring, which she still wears to this day.

It took Muriel time to learn what it was like to be married to a farmer. Though she came from a rural area, she and her family were not farmers in the sense that Milo was. It was an educational experience for her and a major lifestyle change.

The livestock frequently escaped and raided her garden, she said, which was frustrating. She found herself having to drive on mud roads. Getting the mail required them to walk about half a mile. Their neighbors were few and far between, though they had good relationships with the ones they had. Muriel spend a lot of time housebound, she said, because they only had one vehicle and if Milo was working in the fields, the vehicle had to remain close by in case he needed something.

Milo’s life was one of hard work.

“I saw a lot of sunrises from the tractor seat,” he said.

It took time to grow accustomed to this new life, she said, but she never regretted it.

The biggest challenge they faced during their marriage was the loss of their first son. They got through the grief together, in part with help from their neighbors.

Even when they made mistakes — and they did, she said, because farming is a perpetual gamble on everything from seed to the weather — they never dwelled on anything. They just took note and moved forward together.

“There’s challenges all the time in farming and marriage,” Muriel said.

They stayed together through thick and thin by being kind and patient with one another. Muriel describes her husband as a gentle man, someone who was never abusive or mean spirited.

“Milo doesn’t fight,” Muriel said. “If I get mad at Milo, he walks away. I learned to deal with that. And we never had too many things we fought about.”

They had two more boys together after the loss of their first son. Their sons and their families now live in Manhattan, which is how the Johnsons came to live in Junction City.

“Every time Milo brought me flowers, I’d cry,” Muriel said, in tears just talking about it. “He was nice. I guess it made you feel special.”

After almost 70 years of marriage, they have some advice for new couples just starting out and it starts with choosing one’s battles wisely.

“One of our friends said their son came home and said, ‘Dad, how in the world did you and mom ever make it all these years — stay married?’” Muriel said. “And they said, ‘you know, we had fights. We made up and decided we weren’t all at some little argument between the two of us break (us) up.’”

“It wasn’t going to happen,” Milo added, of any split that could conceivably have happened between the two of them.

“We went into like we would go into buying up a business or something,” Muriel said. “I decided we’re going to stick with it, we’re gonna make it work. And that’s the way we did with our marriage. We decided we were married and that we loved each other and somehow we were going to make it work. Yes, we had arguments and I cried a lot … We just coped with what we were dealt — didn’t let the little things bother us. And somehow we worked through the big things.”

She encourages young couples to make time for traveling and fun.

“We enjoy our time together,” Muriel said. “We managed to do a lot of traveling finally after Milo got to the point where he could retire from farming and rent our land out so we get some traveling. And I’d encourage people to work in the traveling and the fun times along with all the hard times.”