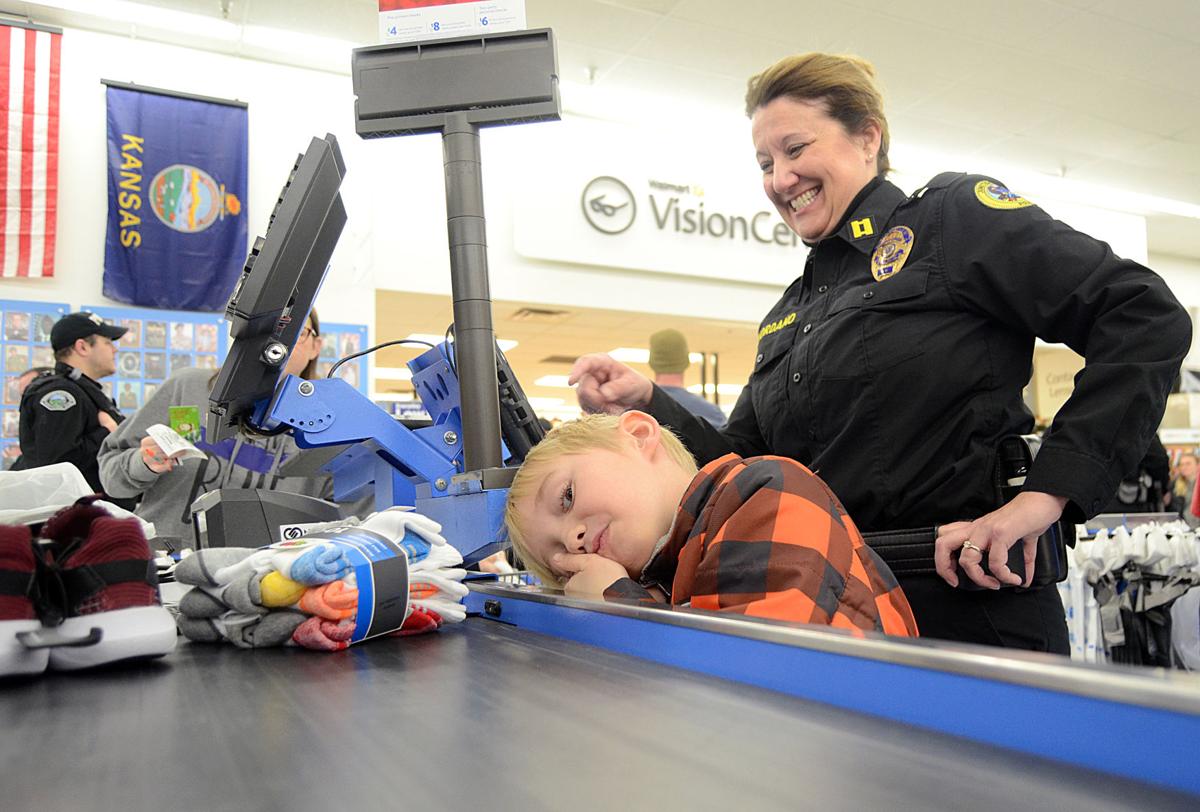 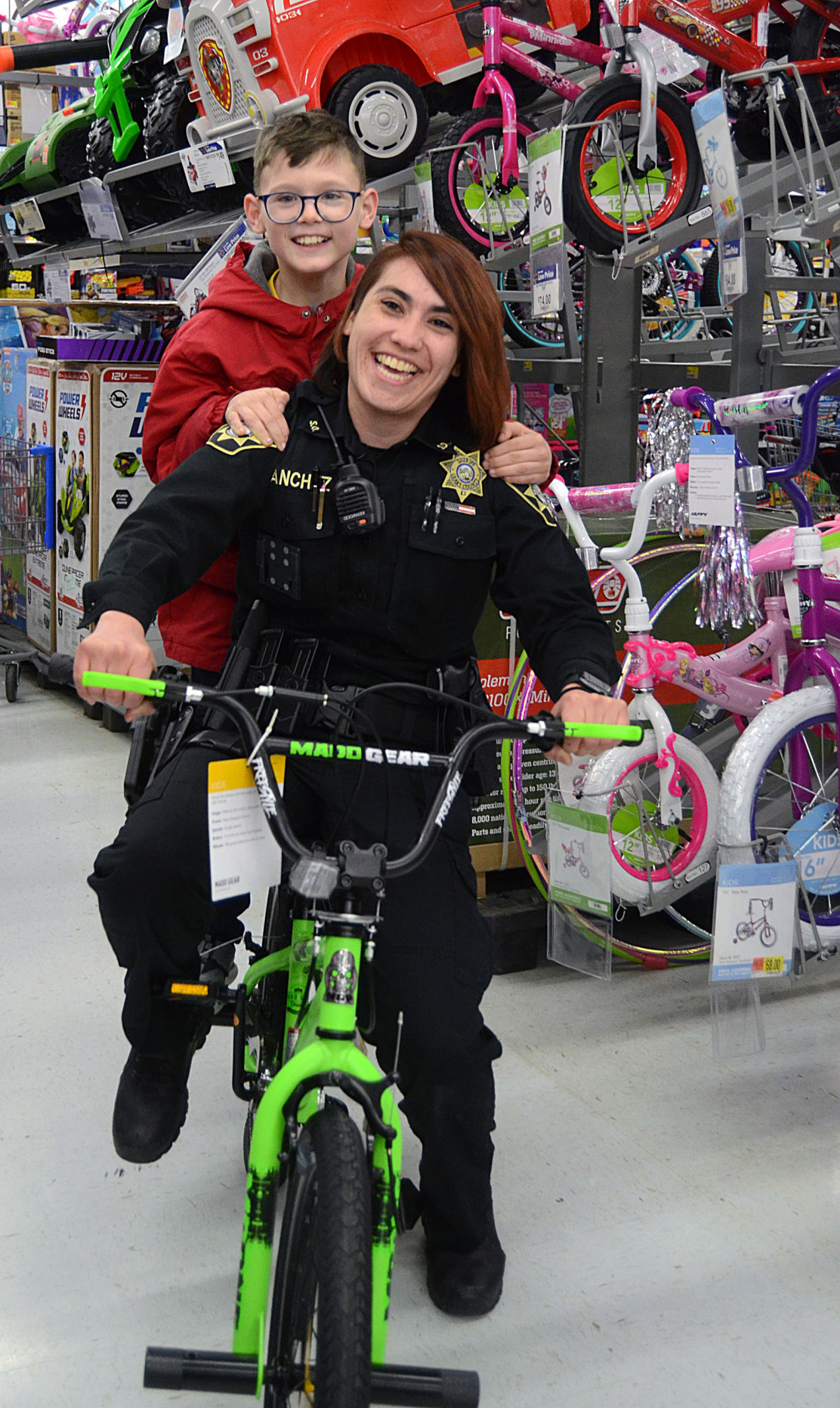 Geary County Sheriff's Office deputy Ali Sanchez and Sterling Snider, fifth grader at Lincoln Elementary School, share a laugh as they try to ride off with a new bike. Snider and Sanchez were among 60 area youth and more than 20 officers from the Junction City Police Department, GCSO, Grandview Plaza Police Department, Kansas Highway Patrol and Fort Riley Directorate of Emergency Services to partner at the annual Shop with a Cop event Saturday. 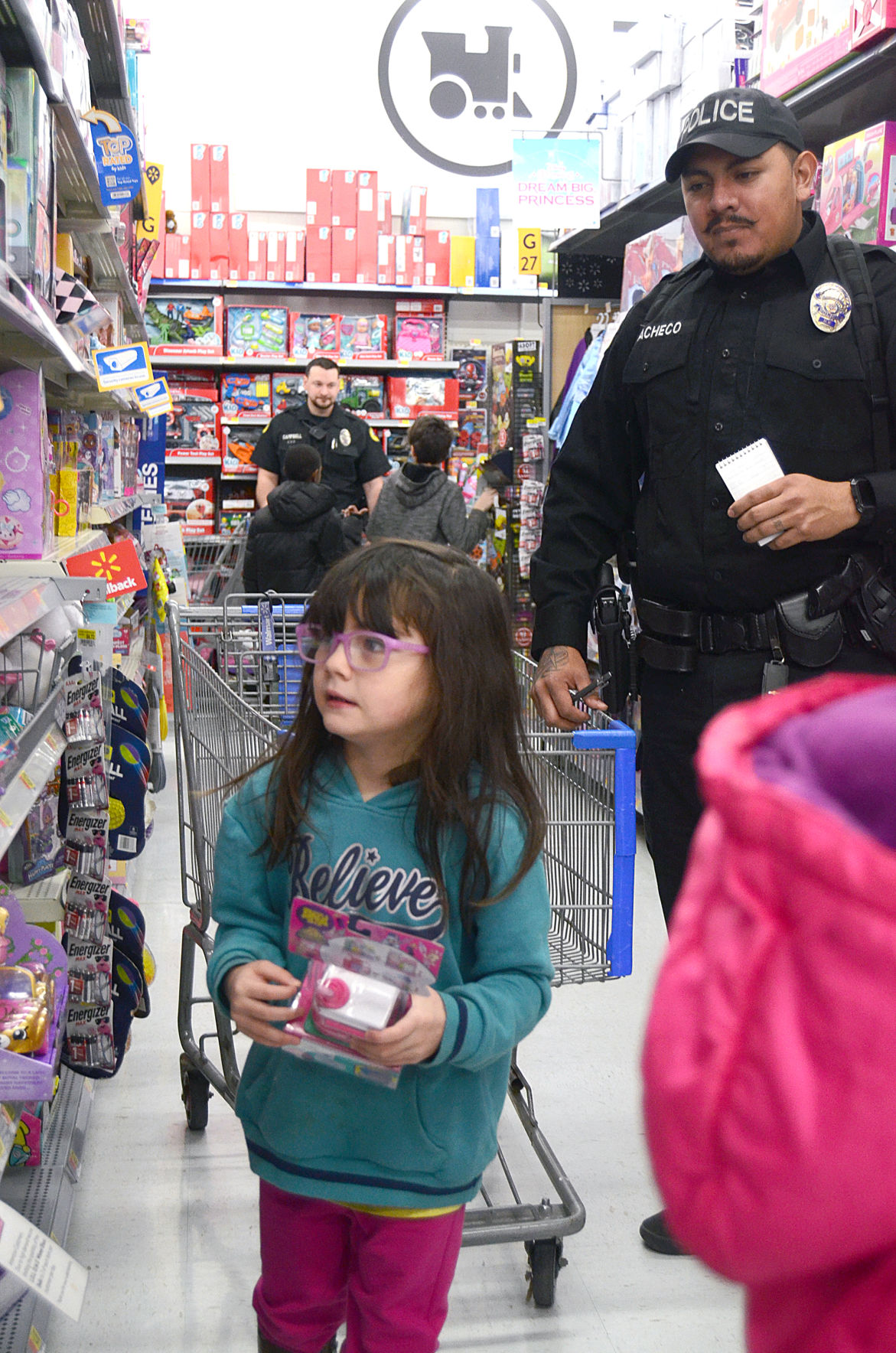 Geary County Sheriff's Office deputy Ali Sanchez and Sterling Snider, fifth grader at Lincoln Elementary School, share a laugh as they try to ride off with a new bike. Snider and Sanchez were among 60 area youth and more than 20 officers from the Junction City Police Department, GCSO, Grandview Plaza Police Department, Kansas Highway Patrol and Fort Riley Directorate of Emergency Services to partner at the annual Shop with a Cop event Saturday.

The day started with a hearty pancake, sausage and egg breakfast at Second Missionary Baptist Church.

“We get excited every year when it comes up,” said Bobby Whitten, church member and retired JCPD officer. “As far as our volunteers, I have no problem at all getting them here. It just makes us feel really good that this church can do stuff for the community like Shop with a Cop.”

Whitten retired in 2011 and the church started hosting the breakfast before the shopping in 2010.

“I was part of it, just like these guys are now,” he said. “Going through the store, looking at the kids faces smiling, buying something … it puts a smile on your face and you know that, yes, you are a part of something good here.”

After breakfast and a group photo, the children loaded up on a bus and made their way to Walmart. Once inside the store, they linked up with either an officer they ate with or one they were familiar with.

JCPD officer Marco Pacheco was overheard talking in the store where he said, ‘You know you’re doing something right when the children seek you out.’

Pacheco shopped with Christel Blow, first grader at Washington Elementary School. The two walked up and down the aisles filling a cart with items she wanted.

Each child, after linking up with an officer, was given a $100 gift card and encouraged to buy whatever they wanted for themselves, siblings or family.

Lt. Greg Harkrader, KHP, said the event was great for him and his fellow troopers — especially one who recently graduated from the academy and was in his first week on the job.

“It’s just a great event,” he said. “Because, it just gives back to the community and it gets our troopers out with the community. Sometimes we meet people in the wrong situation, it’s more of a bad moment. But this is one of the positive things and to make an impression on young kids.”

“They enjoy it tremendously, everybody looks forward to it,” Giordano said echoing the feeling of her fellow officers.

One of the Walmart employees was overheard saying that she was almost brought to tears several times early in the event, seeing the children interact with the officers and enjoy shopping for themselves and their families.

The event was coordinated by Detective Al Babcock and School Resource Officer Eddie Torres. The duo sent out over 100 letters inviting the schools to participate in the event. Babcock said he was pleased with the turnout in both the youth and the departments their time.

“I try to get as many people to volunteer to help out with Shop with a Cop, because sometimes we can have 70-80 kids and not enough officers,” Babcock said. “We appreciate that very much.”

Babcock also credited the many sponsors throughout the community who continue to make Shop with a Cop a success, year after year.

“Without the sponsors donating the money — the citizens, the businesses — Shop with a Cop would no longer exist,” he said.

While the children looked at the items in the store with their law enforcement buddy, Santa made his way around handing out candy canes.

“It’s a wonderful beautiful thing,” Santa said. “Because, Christmas not only is a time for love (but) it should be shared year round. Children are beautiful whether sometimes they be mischievous or not. No lumps of coal in any of their stockings this year.”

After the shopping was complete, the children had the option to leave with their items in the bags and head home with their parent or guardian or have the volunteers wrap the items so they can be opened Christmas morning.