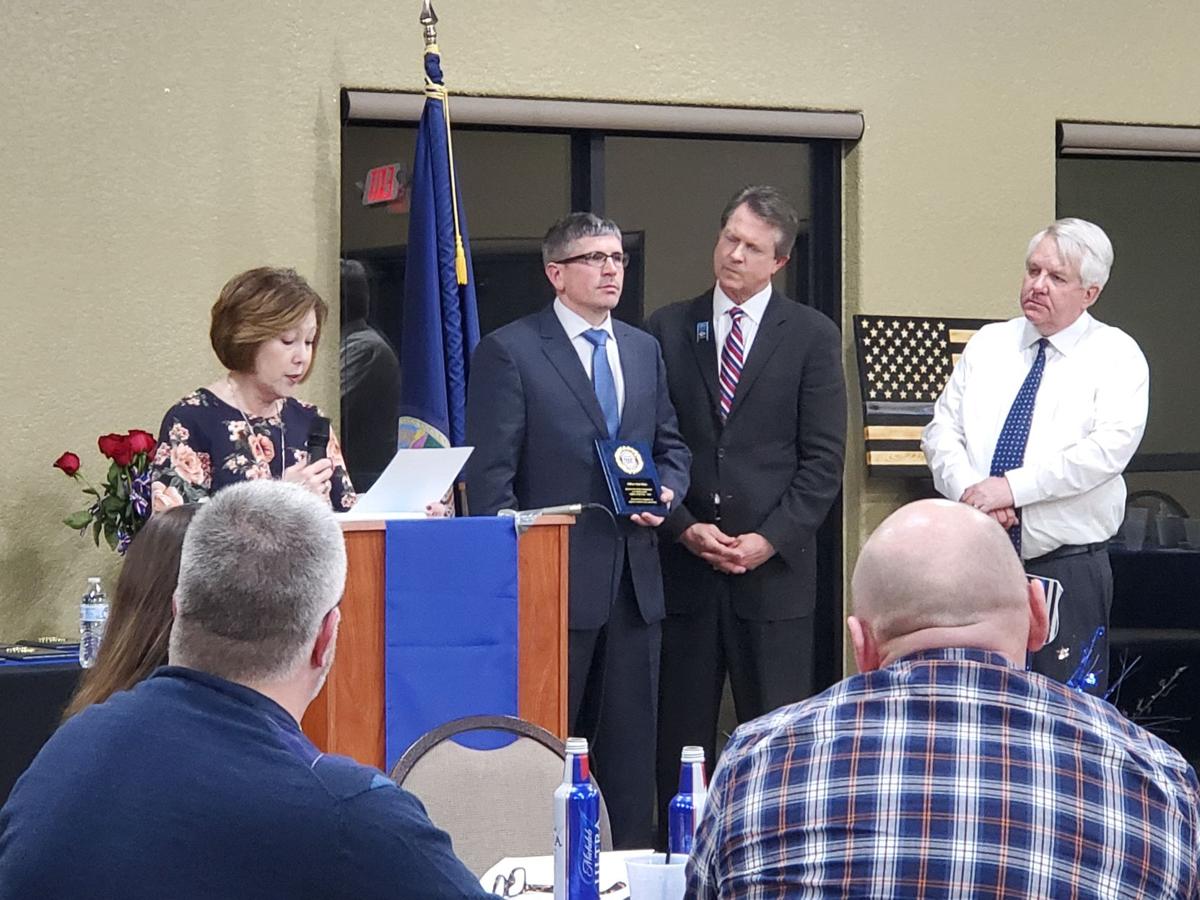 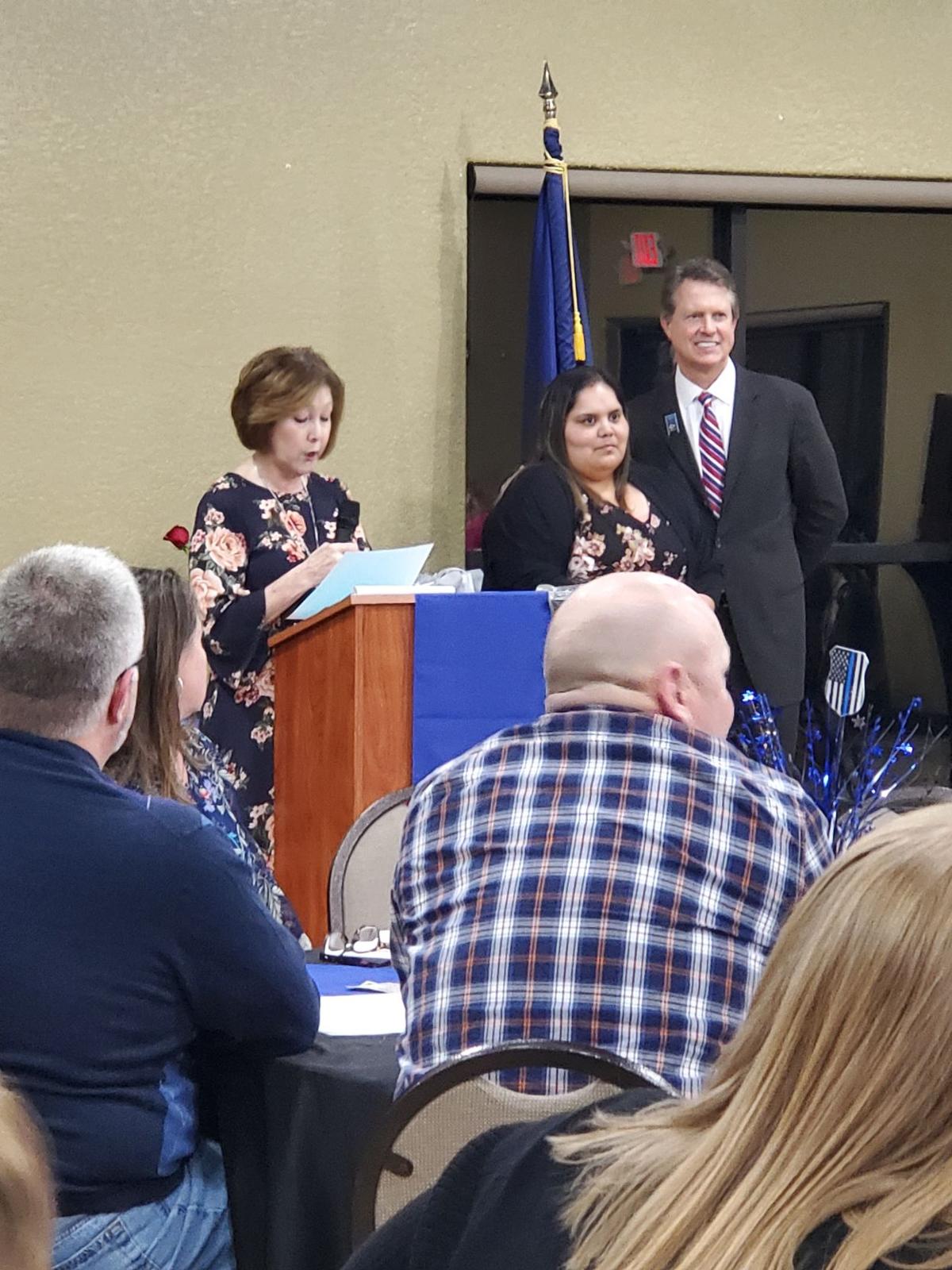 Beth Hudson read off the names and biographies of each awardee.

The Junction City Police Department Law Enforcement Officer of the Year was Officer Nick Blake. He started with the JCPD in 2004 and works with the department’s K-9 Unit, to this day. He is active in local schools and provides a calming, knowledgeable presence for young officers. His work with the local K-9 unit has been recognized nationally.

“Officer Blake has played an intricate roll in seizing over $27 million, over 42 pounds of marijuana, 57 pounds of heroin, over six pounds of cocaine, 60 pounds of methamphetamine, and taking over 100 weapons as well as seizing over 100 vehicles that were used in illegal activities,” Hudson said.

The Geary County Law Enforcement Officer of the Year was James Regalado, who in 2019 took part, alongside one of his fellow deputies, in a water rescue that saved two people who had driven into floodwaters. He is a member of the joint dive team between the Geary County Sheriff’s Office and the Junction City Fire Department.

“Deputy Regalado consistently goes above and beyond his required duties and responsibilities, ensuring he provides professional courteous service to all citizens and visitors to Geary County,” Hudson said.

The Junction City/Geary County Dispatcher of the Year was Annie Asmus. She trains dispatchers and has worked with three trainee dispatchers to date.

“Every day, she does everything in her power to ensure the safety of units out on the street as well as that of others,” Hudson read.

Among other things, Asmus has handled police chases and major motor vehicle crashes. Asmus coordinated a chase in 2019 that started here with a routine traffic stop and ended up in Wabaunsee County, copying all radio traffic and coordinating the chase. She also handled a wreck between a pickup and a semi last year.

The Geary County Corrections Officer of the Year was Sgt. Matthew Tyler, who has been described as “dependable” and “flexible” by his colleagues. He oversees other corrections staff and trains them. He has served in law enforcement since 2011.

The Grandview Plaza Police Department Employee of the Year was Amy Granzow, who started as a part time data entry employee. When a full-time opportunity came available, she took on further responsibilities with the department, including as evidence custodian.

“She’s greatly appreciated by all the officers in the agency,” Hudson said.

The Kansas Highway Patrol Law Enforcement Officer of the Year was Master Trooper Mike Painter, who is a lifelong resident of this area and served as a Trooper for the last 16 years. He has worked on protection details for United States Presidents and foreign dignitaries, among others, due to his “incredible work ethic and professionalism,” Hudson said.

The Fort Riley Law Enforcement Officer of the Year was Lt. Rob Waters, who routinely goes out of his way to routinely help newly-assigned military police officers on post.

The Fort Riley Conservation Law Enforcement Officer of the Year was Lt. Adam Hastert, who coordinated the recovery of four poached trophy-class deer in 2019 through a multi-state, multi-agency effort.

“Lt. Hastert is fully-committed to ensuring the sustainability of Fort Riley’s training area while ensuring recreationalists can use the training areas in a safe manner,” Hudson said.

The Fort Riley CID Supervisory Special Agent of the Year was SSA Lisa Medrano. Her team has been responsible for relocating hundreds of children from physically and sexually abusive homes.

“She is truly passionate about her job and truly cares about the victims in our cases,” Hudson said.

The State Park Officer of the year was Lt. Nate Clement of the Geary County Sheriff’s Office, who serves Milford State Park. In 2019, a large number of boating related incidents came up, which he assisted with, including the rescue of two victims in a capsized vessel.

“(Clement) would often coordinate patrol efforts with the local and state and federal government agencies to provide the best response to emergency calls for service and other boating-related incidents,” Hudson said.

The Juvenile Corrections Officer of the Year was F.J. Torre of the North Central Kansas Regional Juvenile Detention Facility. She has worked in that capacity for the past two years and continually takes on new duties, including training others.

“(Torre) has grown professionally and proven herself to be dedicated (and) proficient in carrying out her duties,” Hudson said.

The Court Services Officer of the Year was Steven Olson from the 8th Judicial District, where he has taken on a full list of duties and responsibilities.

“Even with his full slate of responsibilities, (he) continues to maintain his caseload to the high standard a court services officer requires,” Hudson said.

The Community Corrections Officer of the Year for the 8th Judicial District was Mary Martinez.

“Throughout her time with our agency, her responsibilities have evolved to different aspects in our program,” Hudson read. “She has supervised both juvenile and adult populations and collaborated with multiple agencies to benefit our office and our clients and our community.”