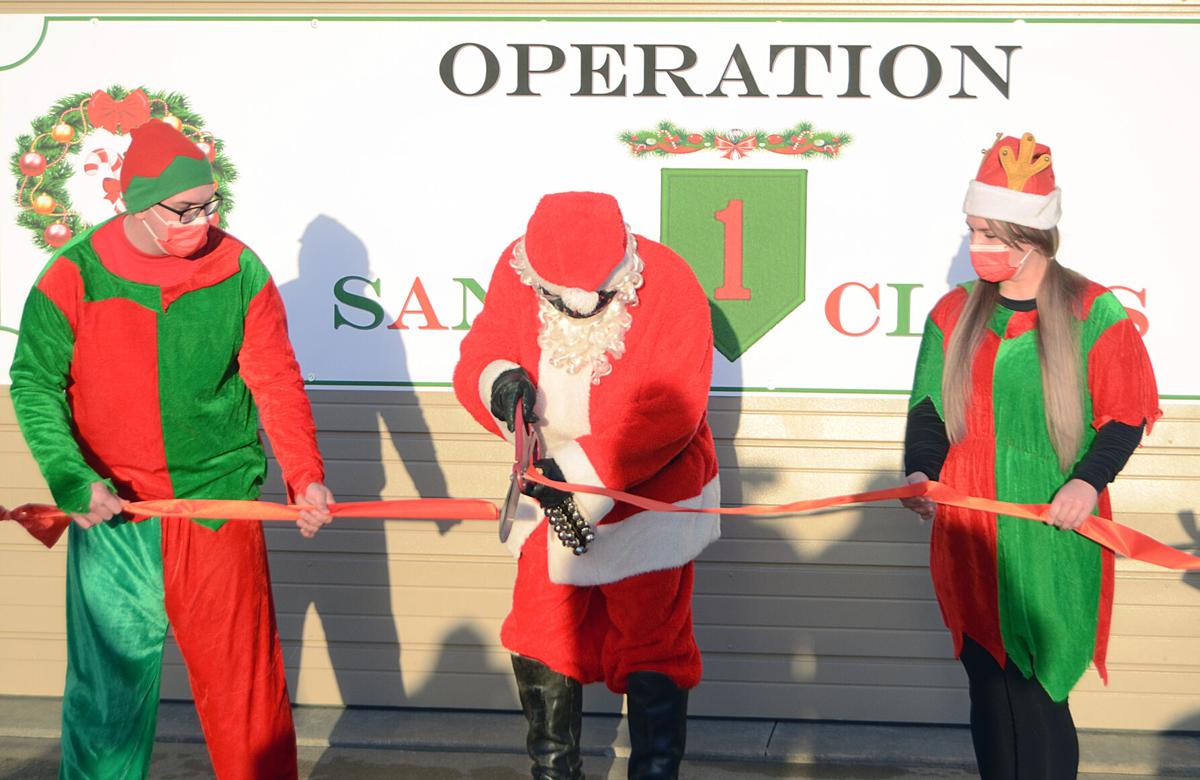 Santa Claus, with help from two Fort Riley elves, cuts the ribbon dedicating the opening of Operation Santa Claus for soldiers with families who are E-5 and below. 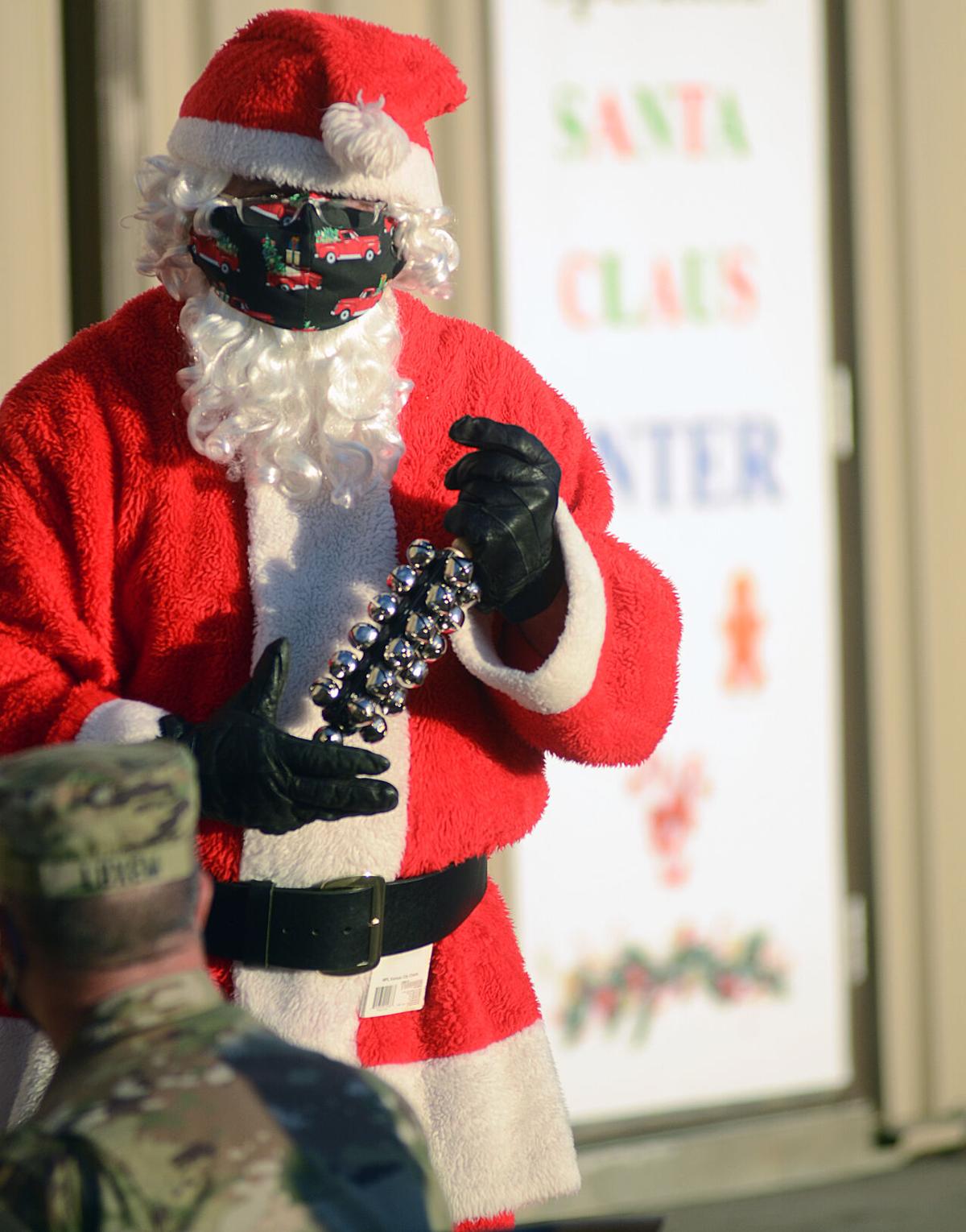 Santa Claus, who called himself the “Big, Red One” appeared after taking a ride on a Fort Riley Directorate of Emergency Services fire truck to open the Operation Santa Claus facility Tuesday. The program, dedicated to soldiers E-5 and below, assists with holiday gifts for children.

Santa Claus, with help from two Fort Riley elves, cuts the ribbon dedicating the opening of Operation Santa Claus for soldiers with families who are E-5 and below.

Santa Claus, who called himself the “Big, Red One” appeared after taking a ride on a Fort Riley Directorate of Emergency Services fire truck to open the Operation Santa Claus facility Tuesday. The program, dedicated to soldiers E-5 and below, assists with holiday gifts for children.

Pfc. Timothy Lunceford, one of the elves at Operation Santa Claus headquarters at Camp Funston, thanked supporters from around the Flint Hills who make donations of time, money and toys to help the children of soldiers have a merry Christmas.

“The continued success of this program relies solely upon the generosity of the citizens of Fort Riley and our partner communities within the Flint Hills region,” he said. “As you see these volunteers in the community asking for donations please remember what they represent. Please join me in thanking these volunteers who works diligently behind the scenes to make a difference in the lives of our military children.”

But it’s not just about making children happy, said Col. William B. McKannay, U.S. Army Garrison Fort Riley commander. Operation Santa Claus and the partnership that the Army has with Santa contributes to military readiness.

“Santa Claus is very important to the military mission, because our soldiers’ readiness begins at home,” he said after Santa and two elf soldiers had cut the ribbon. “If our children can be happy and have a happy holiday season and their parents can provide them with that happy holiday season — Santa Claus is a big part of that and it's going to make us more ready as a military organization.”

He was appreciative that Santa Claus found time to make an appearance at the ribbon cutting.

“The legacy of the 1st Infantry Division at Fort Riley is a very important to us,” he said. “The Big Red One is something that's significant to every soldier in this organization and for Santa Claus who is really the big red one across the world, especially when it comes to bringing happiness and joy to children and families — It's great partnership between both of us.”

Just prior to Santa arriving on a fire truck McKannay thanked the small group who had gathered for the ribbon cutting for the 36th annual toy drive and reminded them what the Operation Santa Claus is about.

The program is for Fort Riley servicemembers E5 and below who are facing financial hardships during the holiday season, he said.

“This season can sometimes be a bit of a struggle for military families,” he said. “This year is no different and even a little harder for some. This has been a challenging year with the impacts of a worldwide pandemic and it's very prevalent in our day-to-day.”

Compounding matters children have dealt with extended separations from their soldier; and, with the cost of living always going up some of the families cannot provide the type of Christmas they had hoped to this year, he said.

“In these situations, it becomes more important than ever for our soldiers and spouses and military children to be able to lean on the Big Red One family — the Army family and the community for support,” he said.

Organizers kept the ribbon cutting smaller than year’s past because of COVID-19, which has put a damper on many celebrations over the past year.

When Santa arrived, he didn’t stay long and there were no children for him to visit with but he did answer one important question.

“Above the Arctic Circle — no coronavirus,” he said.

As soon as he cut the ribbon one of the bay doors at the OSC went up revealing the winter wonderland solider elves designed around shelves of toys, which have started coming in.

“I didn't realize at the beginning how big of a deal it was,” he said. “I had never done an event like this before. It wasn't until I started reading into the history of it that I realized how big of a deal it actually was and realized how many families it would impact. Once I started seeing those numbers, it really did not just affect me but it affected the team in a positive way.”

For some of the children, it’s about more than just the gifts, when they arrive, they are walking into a winter wonderland with a lights and decorations. It becomes a family event, he said.

Anyone interested in helping make Christmas a little brighter for the children of Fort Riley’s soldiers make toy or financial donations at any of the boxes set up around Junction City including at Walmart and the Chamber of Commerce. To learn more, go to https://www.facebook.com/Opsantafortrileyks.