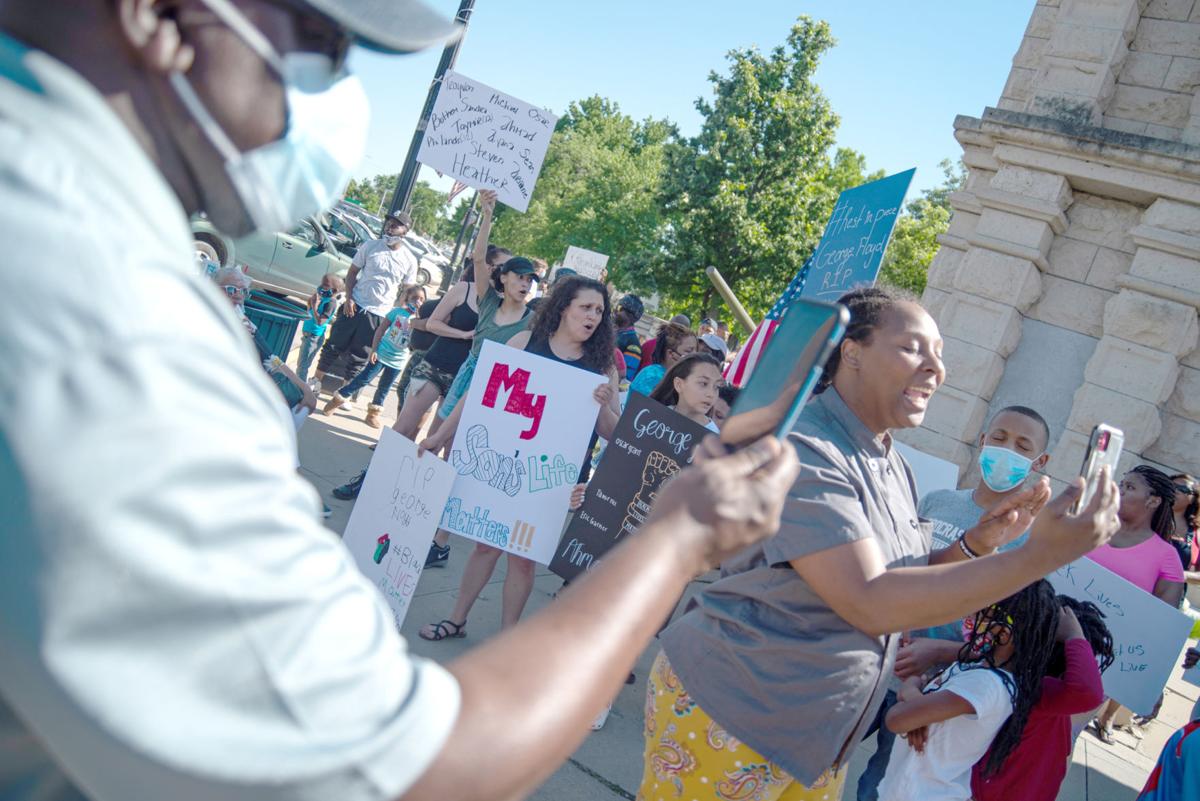 Lewis Smith, far left, and Kalecia Simmons, right, film the peaceful protest in honor of George Floyd on the corner of 6th Street in Junction City on Friday. 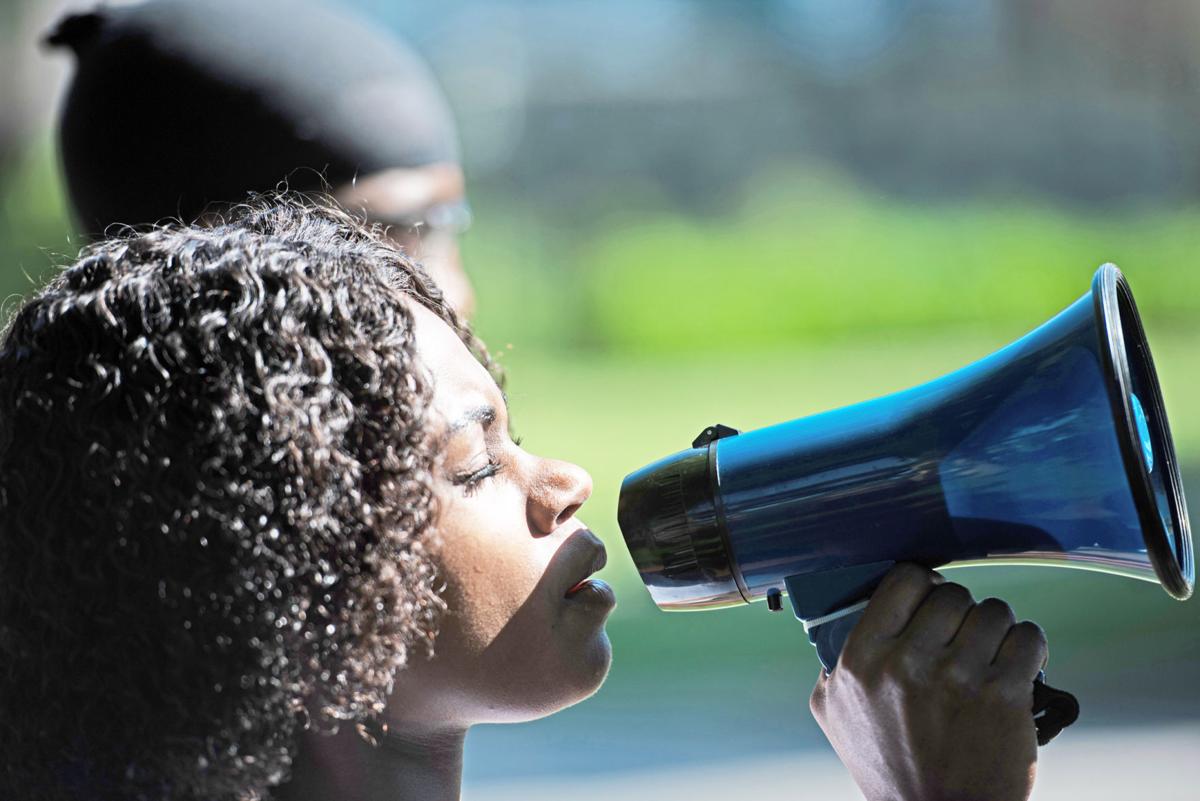 Ka’Neisha Collins uses a megaphone during the peaceful protest in honor of George Floyd at Heritage Park in Junction City on Friday. 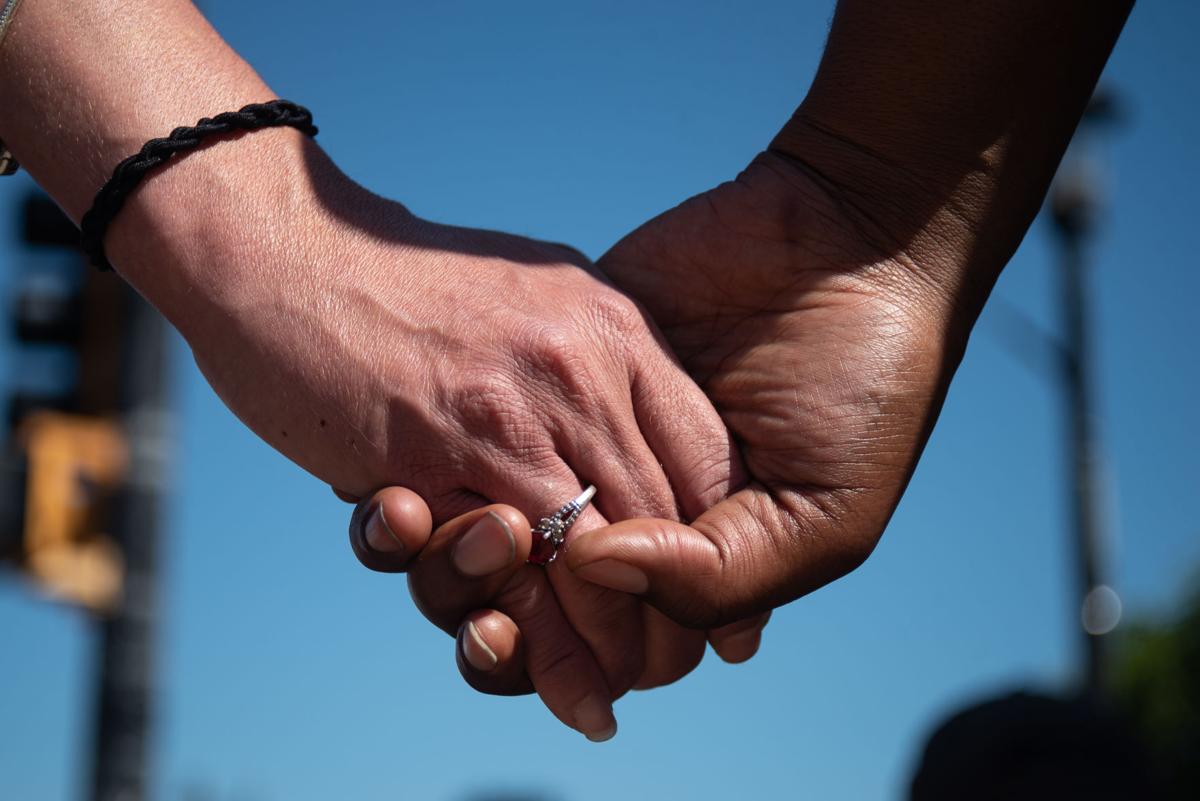 Toby Williamson, left, holds hands with Danielle Oliver, right, on the corner of 6th Street and North Washington Street at a peaceful protest in honor of George Floyd on Friday. 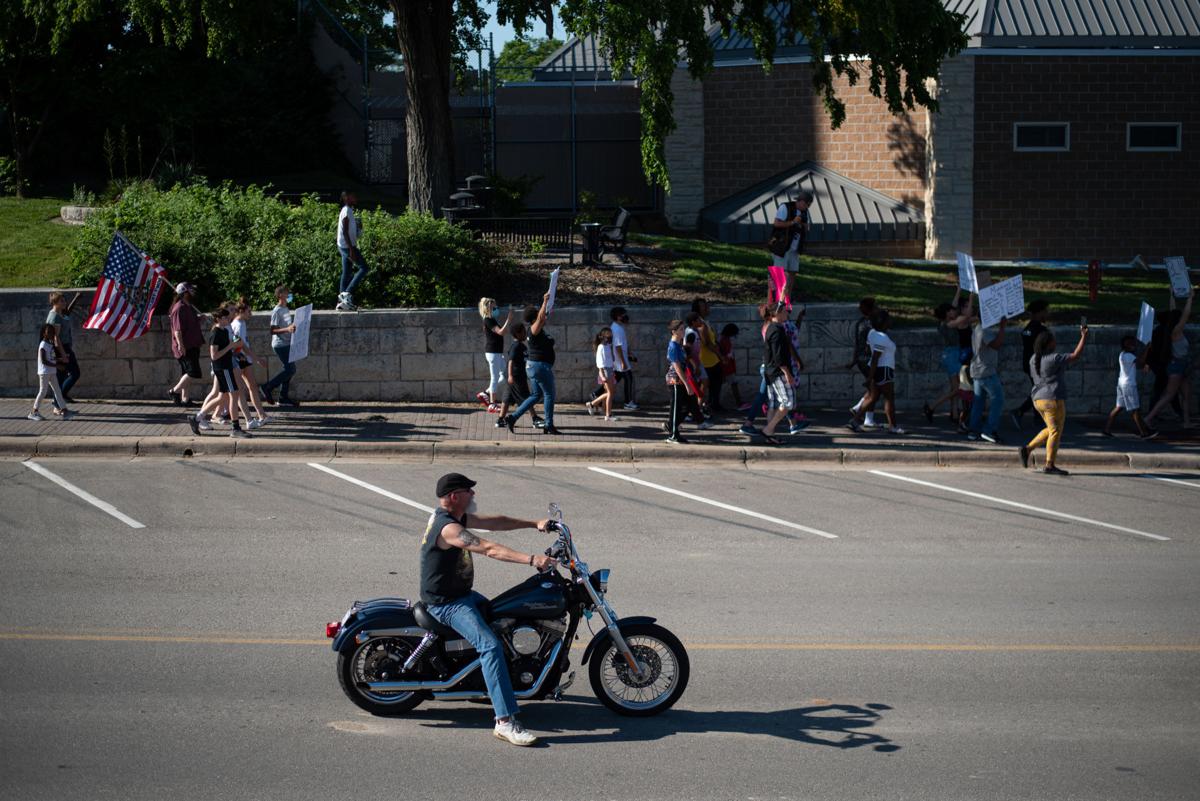 Lewis Smith, far left, and Kalecia Simmons, right, film the peaceful protest in honor of George Floyd on the corner of 6th Street in Junction City on Friday.

Ka’Neisha Collins uses a megaphone during the peaceful protest in honor of George Floyd at Heritage Park in Junction City on Friday.

Toby Williamson, left, holds hands with Danielle Oliver, right, on the corner of 6th Street and North Washington Street at a peaceful protest in honor of George Floyd on Friday.

There have been protests across the country in the wake of the death of African American man George Floyd, who died after Minneapolis police officer Derek Chauvin knelt on his neck for more than eight minutes.

Some of these protests have been peaceful and others have not.

Friday afternoon, people from Junction City and surrounding communities gathered together in peaceful protest of Floyd’s killing — and of others killed in acts of police brutality.

The protesters included people of all ages, races, and backgrounds.

One of them, Unita Cross, said she chose to show up to the protest in the park to push for equality and for the sake of her son, who is also black.

“We are tired of seeing our black men getting killed — being treated like we’re nothing,” she said.

Cross said she had watched the video of Floyd’s death over and over again. She’d seen such videos before — a lot of them — but this one hit different, she said.

“Life just drained out of him and there was nothing we could do about it,” Cross said. “People who were right there couldn’t do anything about it.”

Cross said she was struck by the senselessness of Floyd’s death.

“When I heard yesterday on Facebook that Michael Turner was going to have a rally, there was no way in the world I wasn’t gonna make it out,” she said. “Hell or high water, I was going to make it. This is to show my support — because I’m tired of it. I have a black son and I’m scared for him. My son is the best person I know. But looking down the barrel of a gun, they don’t know who he is. They see him as a black man and that’s all they need to know and then it’s shoot to kill. But I’m doing this for the sake of me — knowing that I’m going to support my community, black and/or white. But at this point in time, it’s a black (issue).”

To Cross, the protest was a drop in the bucket, but she hoped it would make a difference in its own small way.

“Every time people come together, there’s a difference,” she said. “This may not be worldwide in this little community, but it all speaks volumes to us … We don’t need 1000 people to make an impact.”

“We as a people as a country, if we take each and every one of us to be a penny, it takes pennies to make dollars,” she said. “You get enough pennies in the bank account, you just might be alright. So if we get enough people, we just might be able to change some things around here. That’s all I’m saying.”

“Today, all lives matter, but it’s just the injustice of what we’re going through,” she said. “George Floyd did not have to die. That was straight up murder … It’s time for it to stop.”

Jeffrey Wenger of Chapman showed up as well, waving large American flags and with several flags mounted on the back of his pickup truck.

“I just wanted to stand up for all these people out here because I’m a patriot,” he said.

Another protestor, Cheryl Freeman, recalls the protests of her youth.

She remembers when the Ku Klux Klan attempted to hold a rally in Junction City in the 1990s.

“We stopped the KKK from marching. back then,” Freeman said. “We also marks the Martin Luther King.”

Today, she said, the country has not changed nearly as much as it should have since those days.

However, Freeman said, she appreciated the Junction City Police Department and the way it treats the community it polices.

“All I can say, I love the Junction City police force,” she said. “I do. I love them. They’ve been good to me and I haven’t seen anything — at least they’re not killing us and I’m grateful for that.”

Protestor Kenya Jackson agreed not enough had changed and in fact said he believed some things had gotten worse.

“It’s been time for a change,” he said. “The change hasn’t come nowhere near quick enough that we need it to. We’re all humans, we’re all people, we breathe the same air, we drive the same roads. So at that point, we should all come together as one. But it seems that minorities are not being treated as one.”

Jackson said he saw minorities being targeted across the country for no reason he could discern.

He hoped protesting would help others to see there was no reason for division.

He said he was just grateful to have his life and hoped to change minds by staying positive and being kind.

Kalecia Simmons brought her children to the protest.

As a business owner, she said, it also was important for her to show up and support her community and for her children, however young, to learn an important lesson that not all children have to learn.

“I do have black kids and I do have a black husband,” she said “And at any moment, these scenarios that are happening in our country could affect me directly. So that’s super important to me that my kids are aware — that they know, that they’re educated, that they see that their community sees them.”

After the protest ended, Junction City Police Chief John Lamb would share a message on the JCPD Facebook page in support of the protest.

"The men and women of the Junction City Police Department are committed to protecting and strengthening the trust with the community. Recognizing that trust has been established and built over many years it only takes one or two negative incidents to have a detrimental impact on the communities’ trust. The members of the Junction City Police want to assure the community that the protection of everyone’s civil and constitutional rights is of the highest priority. The use of excessive and improper force by the JCPD will not be tolerated," the post read. "The JCPD is dedicated to maintaining the highest level of integrity and professional service."