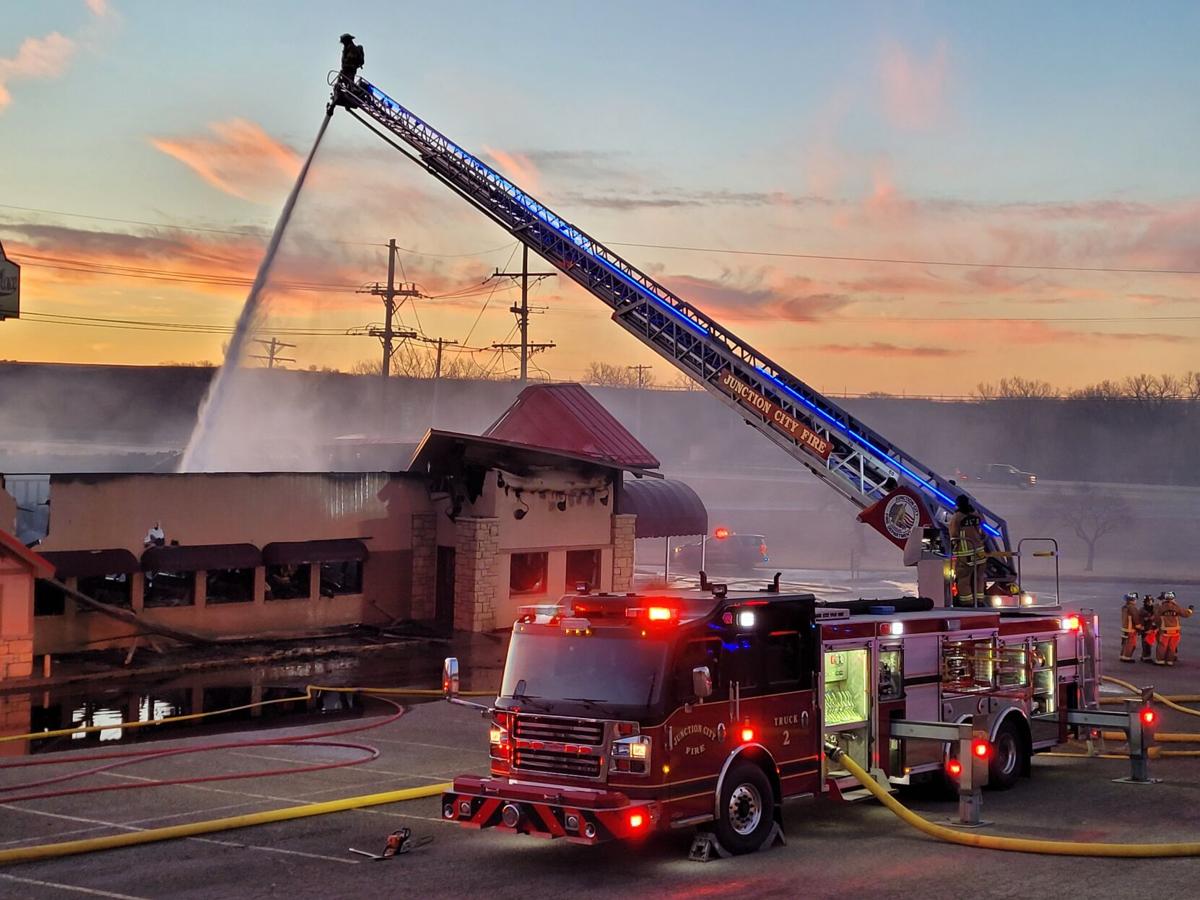 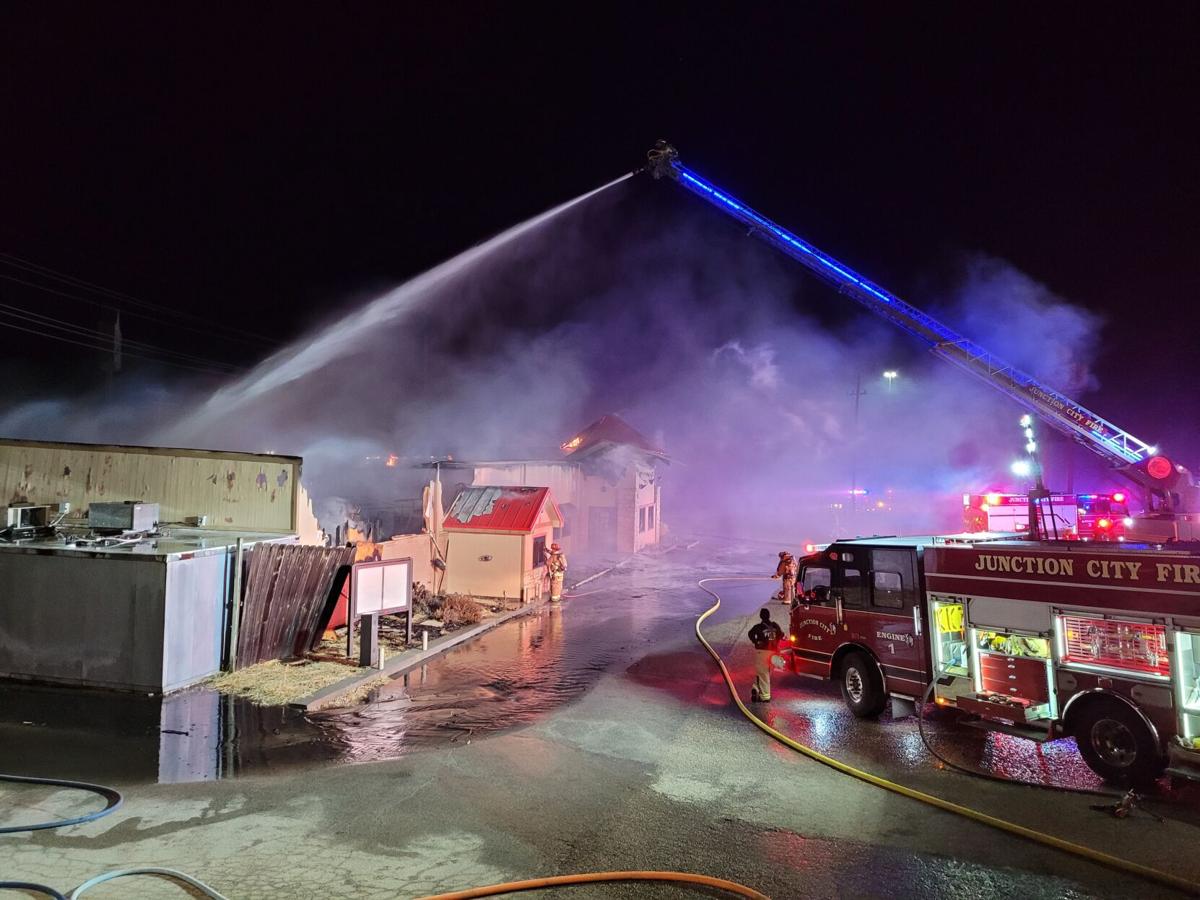 Munson's Prime caught fire in the early hours of Wednesday morning at Goldenbelt Boulevard and Jackson Street. The Junction City Fire Department is currently working to put out the fire. This is a developing story. More information will be posted as it comes available. 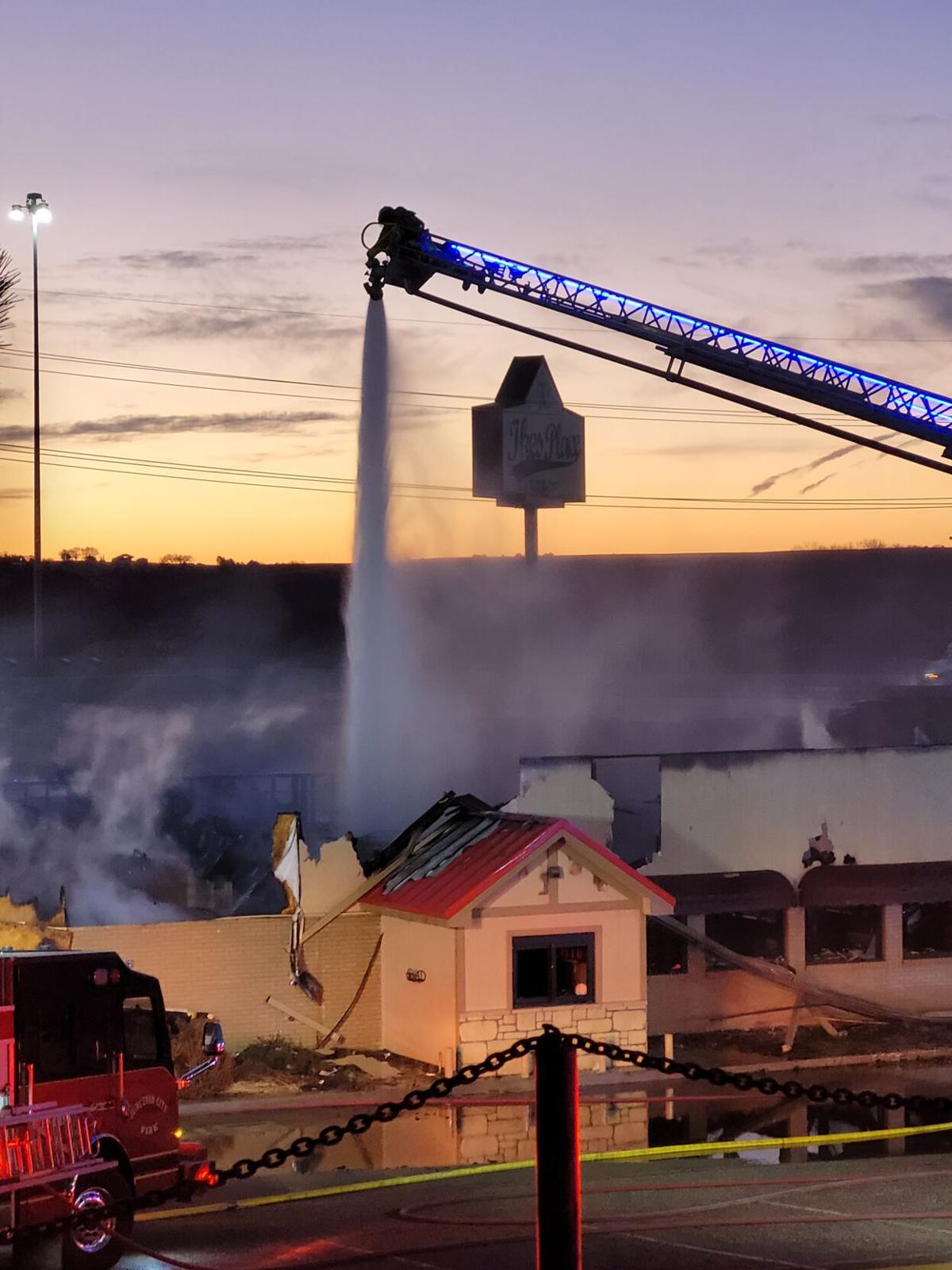 At dawn Wednesday, firefighters continue extinguishing the flames at Munson's Prime. The restaurant was a total loss. 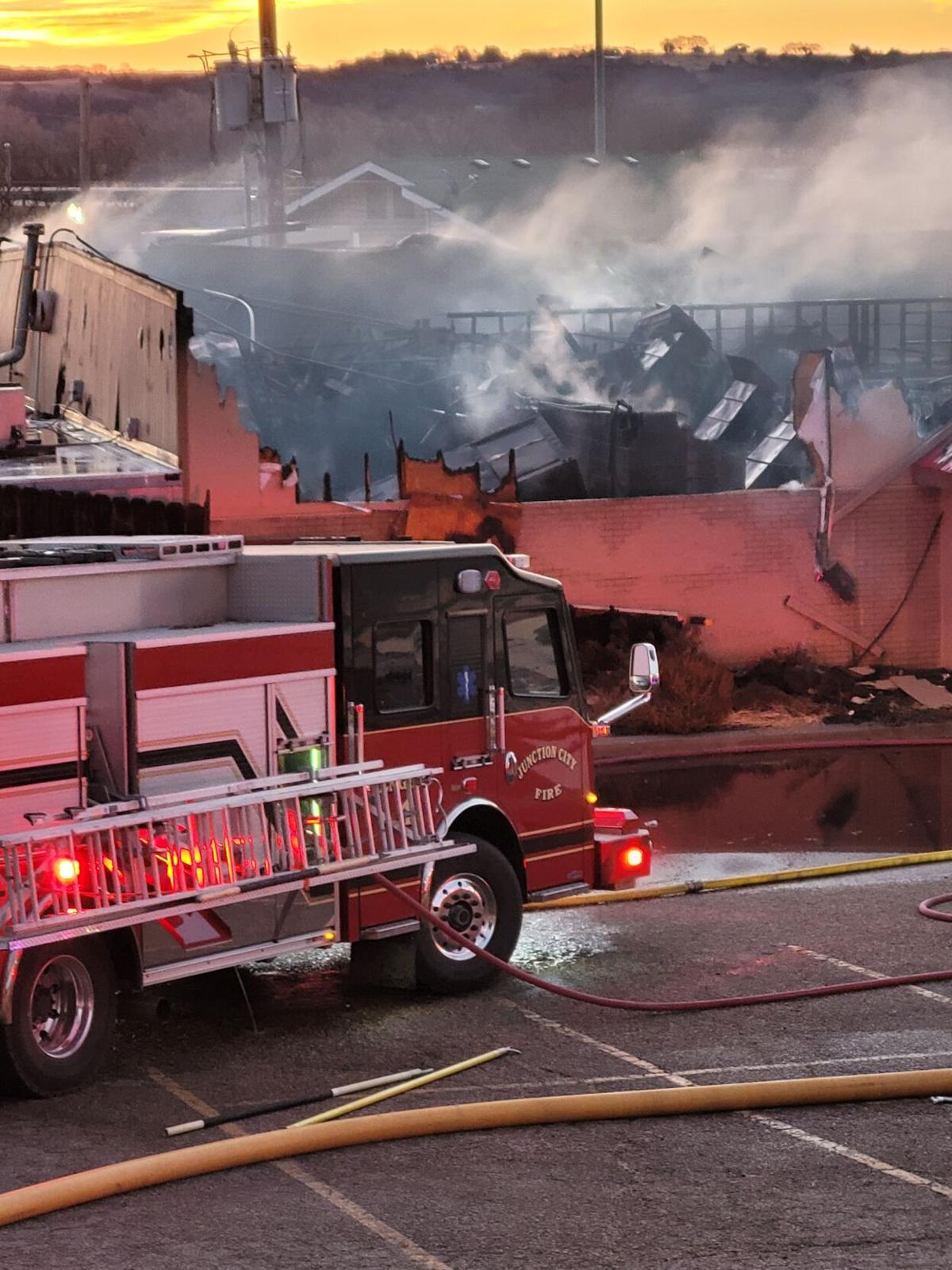 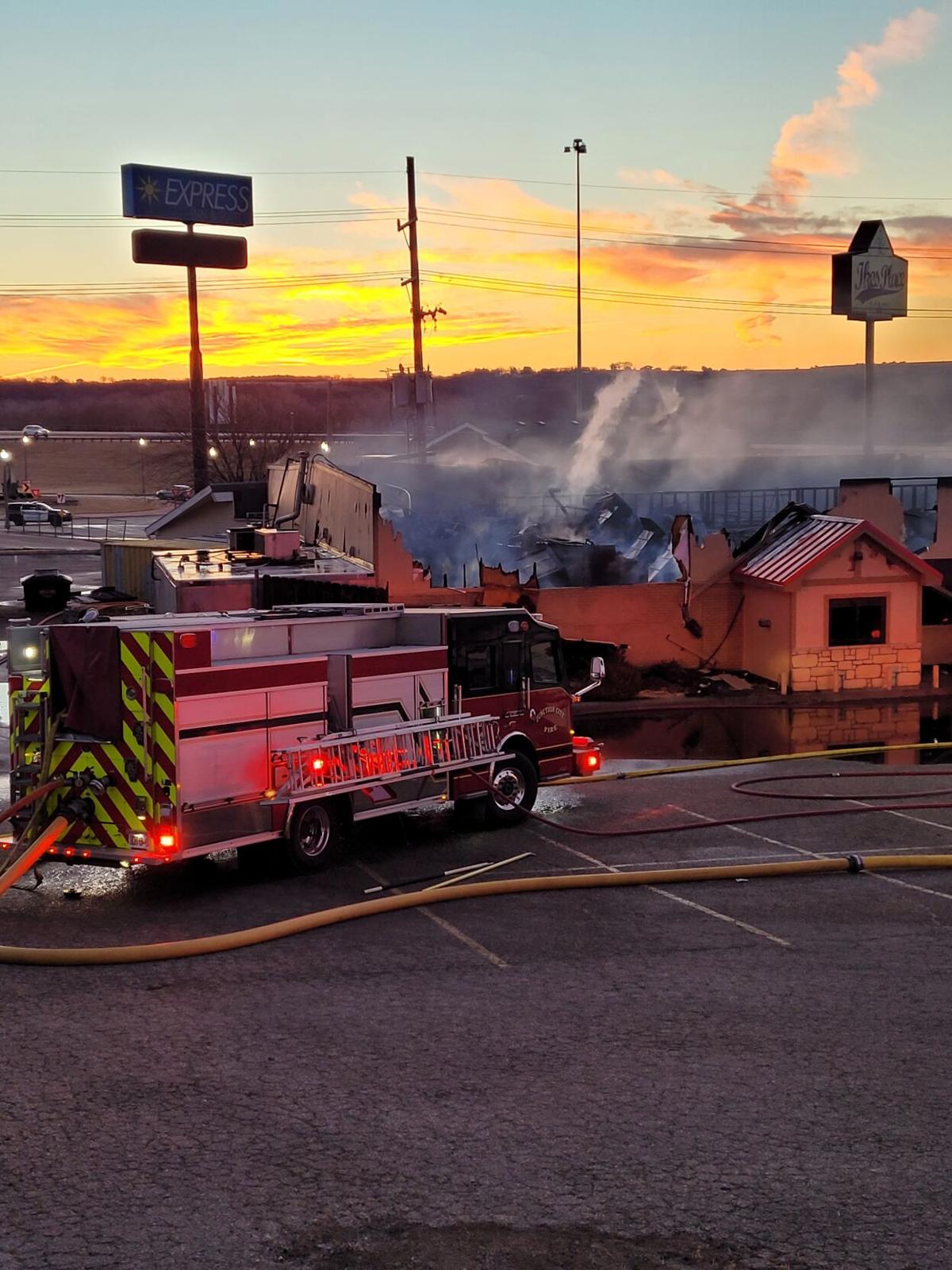 A fire that is still under investigation by the JCFD and the State Fire Marshall's Office destroyed Munson's Prime Wednesday. 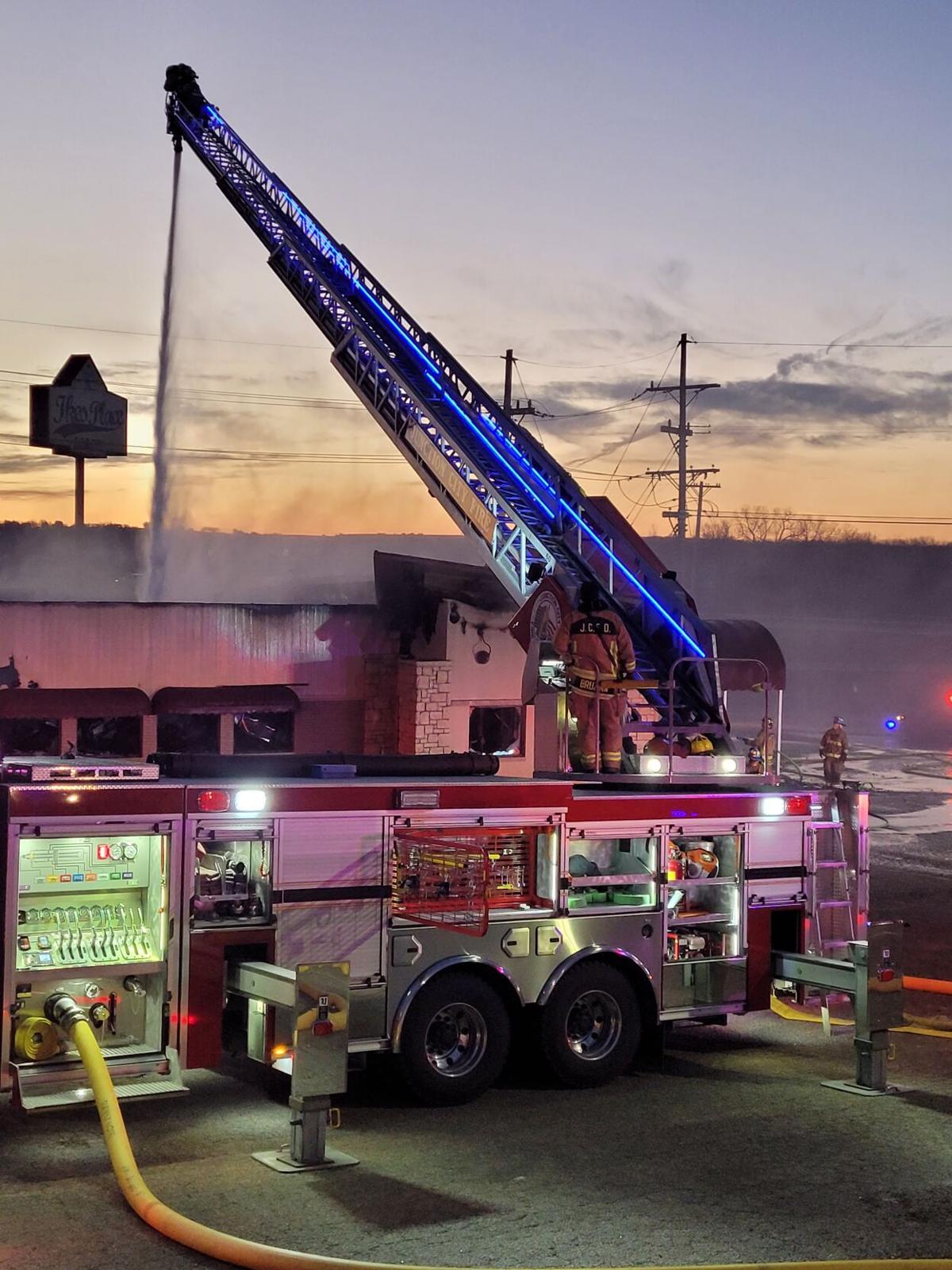 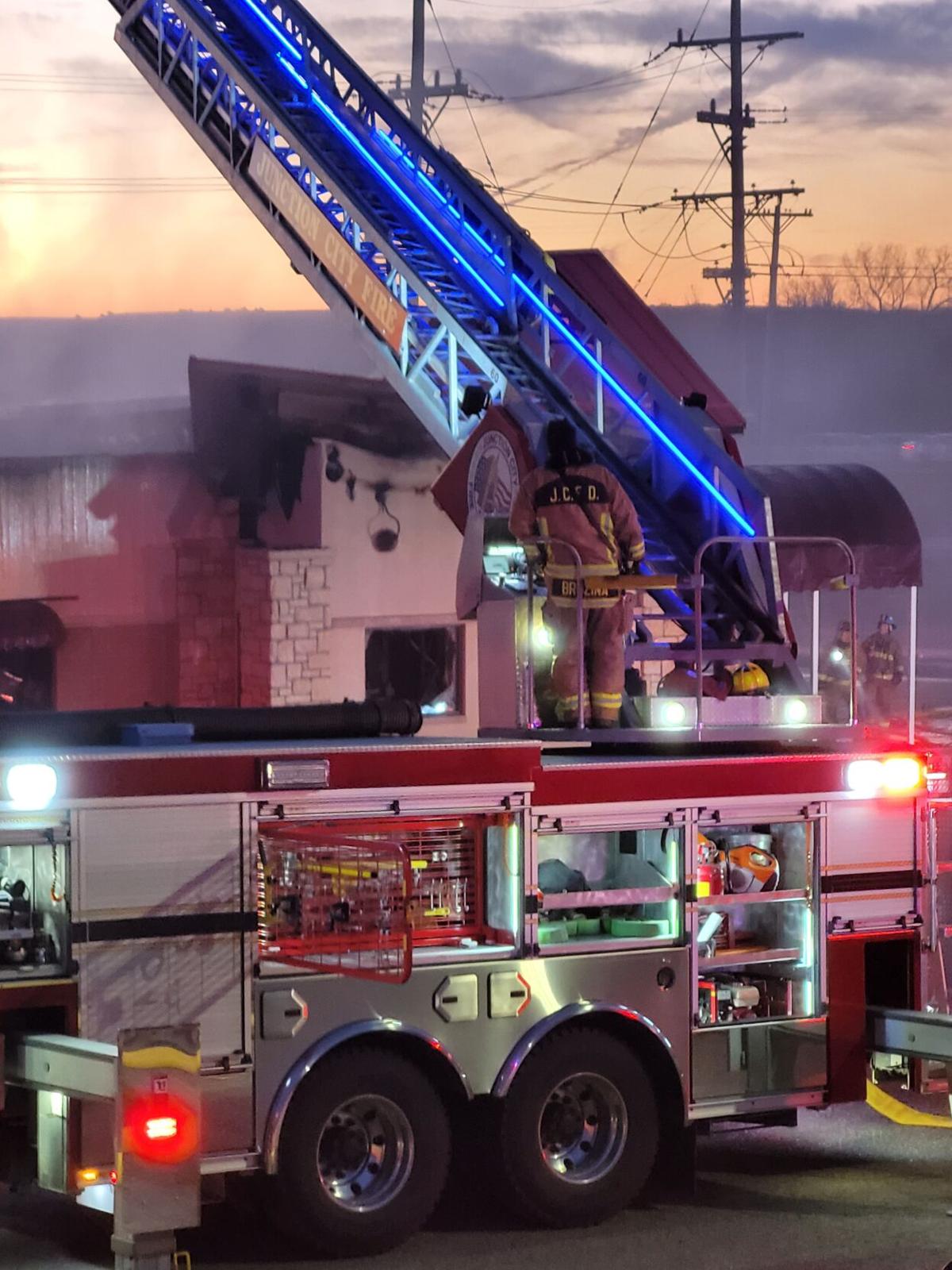 Munson's Prime caught fire in the early hours of Wednesday morning at Goldenbelt Boulevard and Jackson Street. The Junction City Fire Department is currently working to put out the fire. This is a developing story. More information will be posted as it comes available.

At dawn Wednesday, firefighters continue extinguishing the flames at Munson's Prime. The restaurant was a total loss.

A fire that is still under investigation by the JCFD and the State Fire Marshall's Office destroyed Munson's Prime Wednesday.

Munson Prime burned to the ground in the early hours of Wednesday morning.

Firefighters responded to a call at around 4 a.m. Wednesday for a fire at the Junction City steakhouse, 426 Goldenbelt Blvd., after a Geary County Sheriff’s deputy found the building ablaze.

Junction City Fire Department Chief Terry Johnson said the fire is still under investigation. The cause is not yet known.

Johnson said firefighters arrived at the scene to find flames at the back of the restaurant.

“We tried to make entry into there and the way the fire conditions were going, it pushed us back out,” he said. “We went to what’s called a defensive operation where we tried to extinguish the fire from the outside and protect what we call exposures — other buildings. We had the main power transfer line above the building that we were trying to protect — plus Ike’s (Place) next door.”

He said the building began to collapse, so they couldn’t fight the fire from inside as they usually would without putting firefighters' lives at risk.

Johnson said the fire spread quickly once it entered the roof.

“Getting control of it was difficult at best,” he said.

Johnson said he believes most of the contents of the restaurant were destroyed, but he won’t know that for certain until firefighters enter the structure and search it.

Deanna Munson, who owns the restaurant with her husband, Chuck, arrived at the scene to find the building engulfed in flames. She said whatever happened must have taken place between 11:30 p.m. when the restaurant closed and about 4 a.m. when a deputy discovered the fire.

Deanna said she had no idea what could have sparked the fire.

“Something occurred, either internally or maliciously — I don’t know,” she said.

“Everything was checked,” she said. “Same as every night. And (the manager) was the last one to leave, and he has to be the most conscientious manager I have ever worked with in any shape or form... There was nothing that was — he just listed off to me everything that he checked, which is our usual routine of closing it down — and everything was totally checked.”

Deanna said one of the biggest losses are the irreplaceable family artifacts that were inside the building when it burned.

“We are insured, and money is one thing," she said, "but in our case, we have every one of our important (pieces of) memorabilia for six generations of the Munsons on the walls.”

These heirlooms include Chuck Munson’s father’s awards from a cattle show where he broke records that have never been matched, she said.

Deanna said she hoped some of the items might have survived the fire because they were behind glass. Some of the heirlooms might be able to be reproduced, but not all of them, she said.

“Normally you don’t put things like that in a restaurant, but since we’re so — six generations of us here in Junction — and so community minded, where are we going to put them, where can the community enjoy them more than right here in our public space?” she said. “That’s the part that I’m sitting here crying about."

Also in the building at the time of the fire was a piano that was the only item that survived a fire that destroyed the C.L. Hoover Opera House in 1898.

The restaurant has been in business since 2014.

Johnson praised the firefighters' efforts to save the building and for protecting the structures around it.

“No one got hurt, so that’s one of the biggest things that we can take away from it,” he said. “We try to look at the plus sides in our job, because no matter what we do, we’re pretty much what I call behind the eight ball when we get started. It’s already a major event, it’s already happening and we have to mitigate that. So all in all, I think our guys did a tremendous job. Fort Riley did a tremendous job even (the Kansas Department of Transportation) for putting up signs for us — all of that is what our emergency services do on a daily basis."