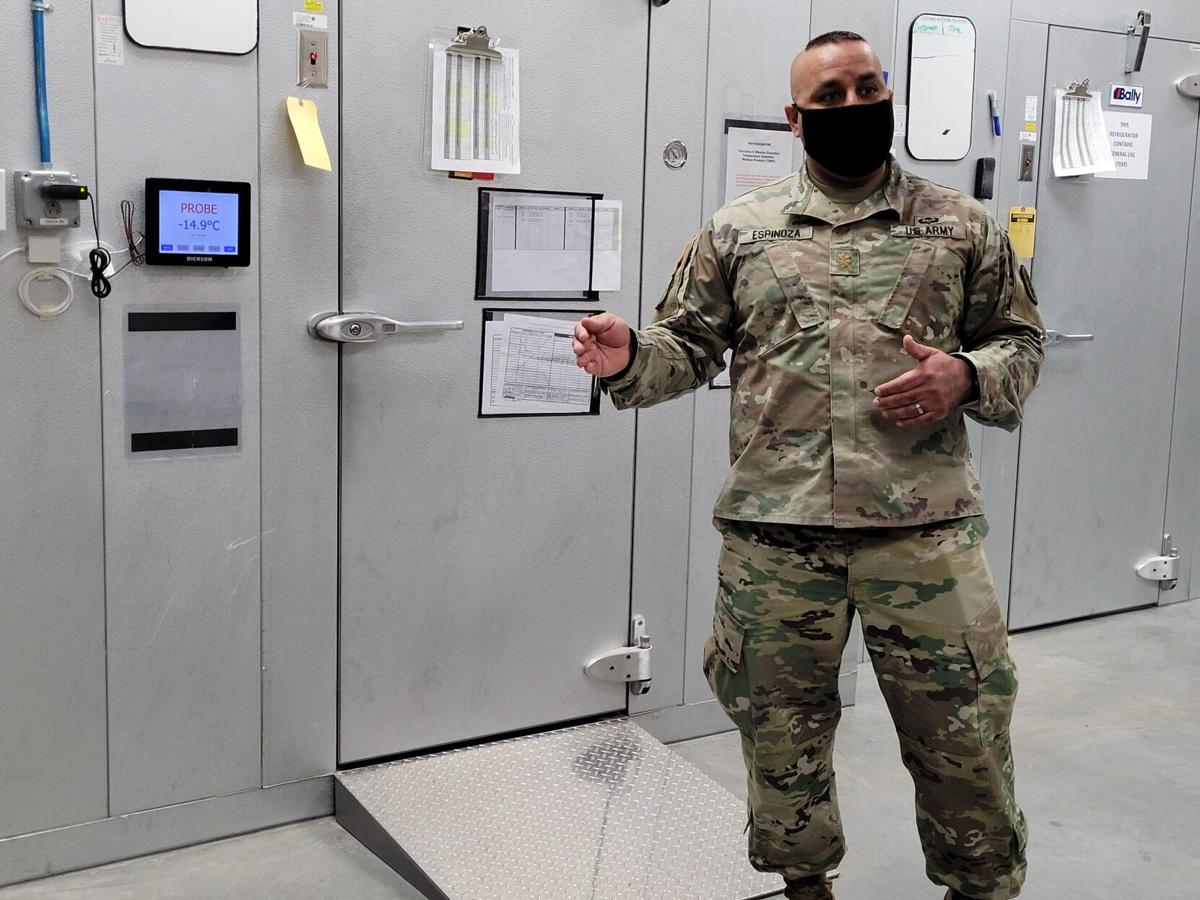 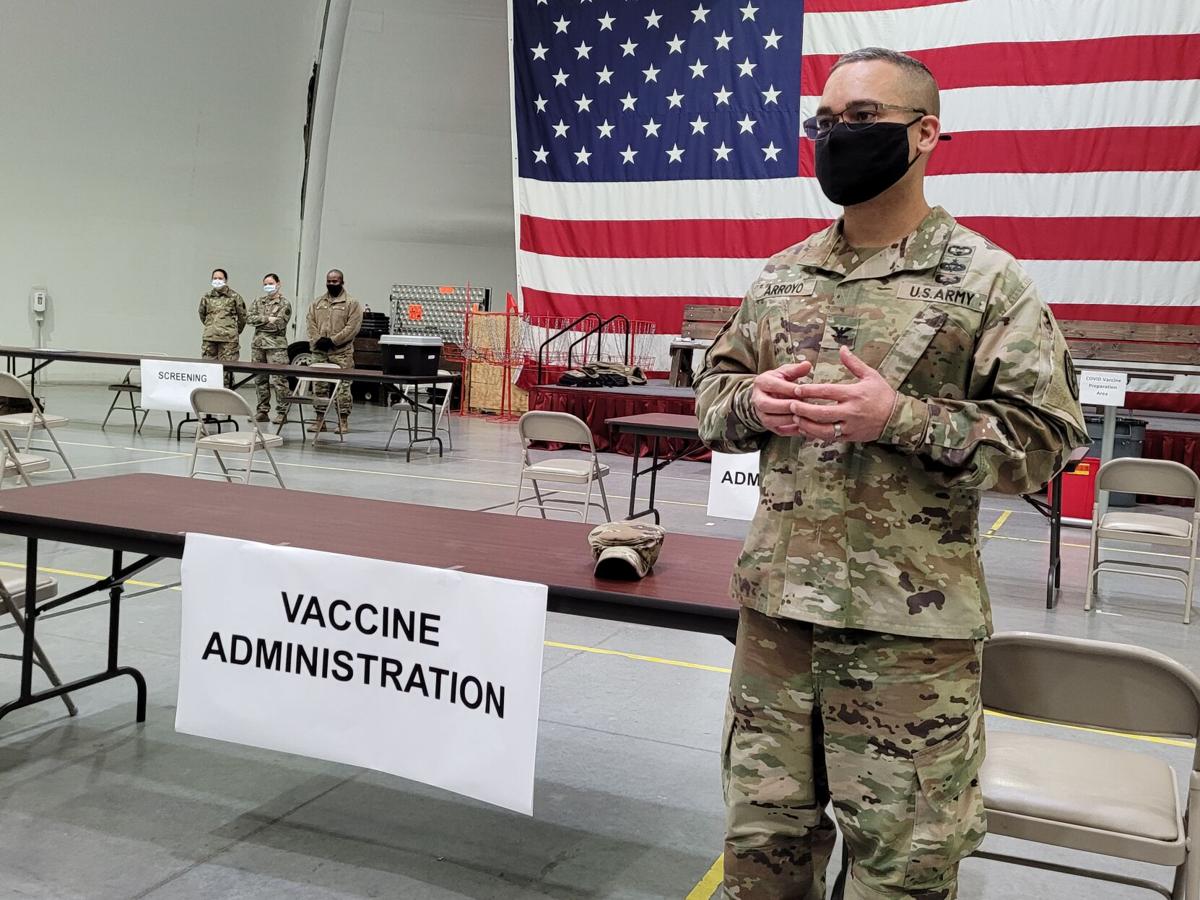 Irwin Army Community Hospital Commander Col. Edgar Arroyo answers questions from the media during a walk through of IACH's vaccine administration plan. The plan has been put in place in advance of the arrival of COVID-19 vaccines to Fort Riley to ensure the vaccination process goes smoothly. 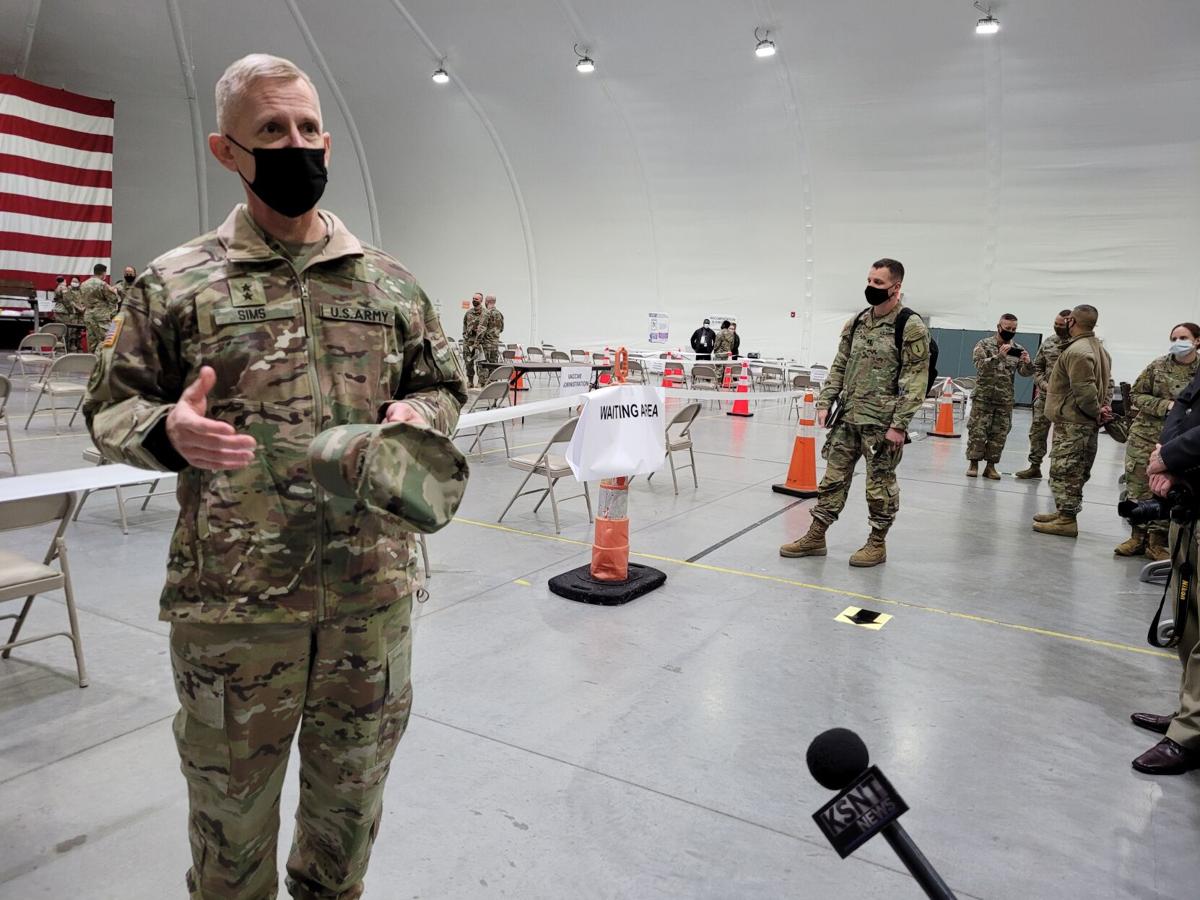 Fort Riley Commanding General Maj. Gen. Douglas A. Sims speaks to the media Tuesday morning about the arrival of the new COVID-19 vaccine on Fort Riley. The post's doses of the vaccine have not arrived yet, but Fort Riley is practicing its system for when they do in order to ensure the vaccines' delivery is efficient. 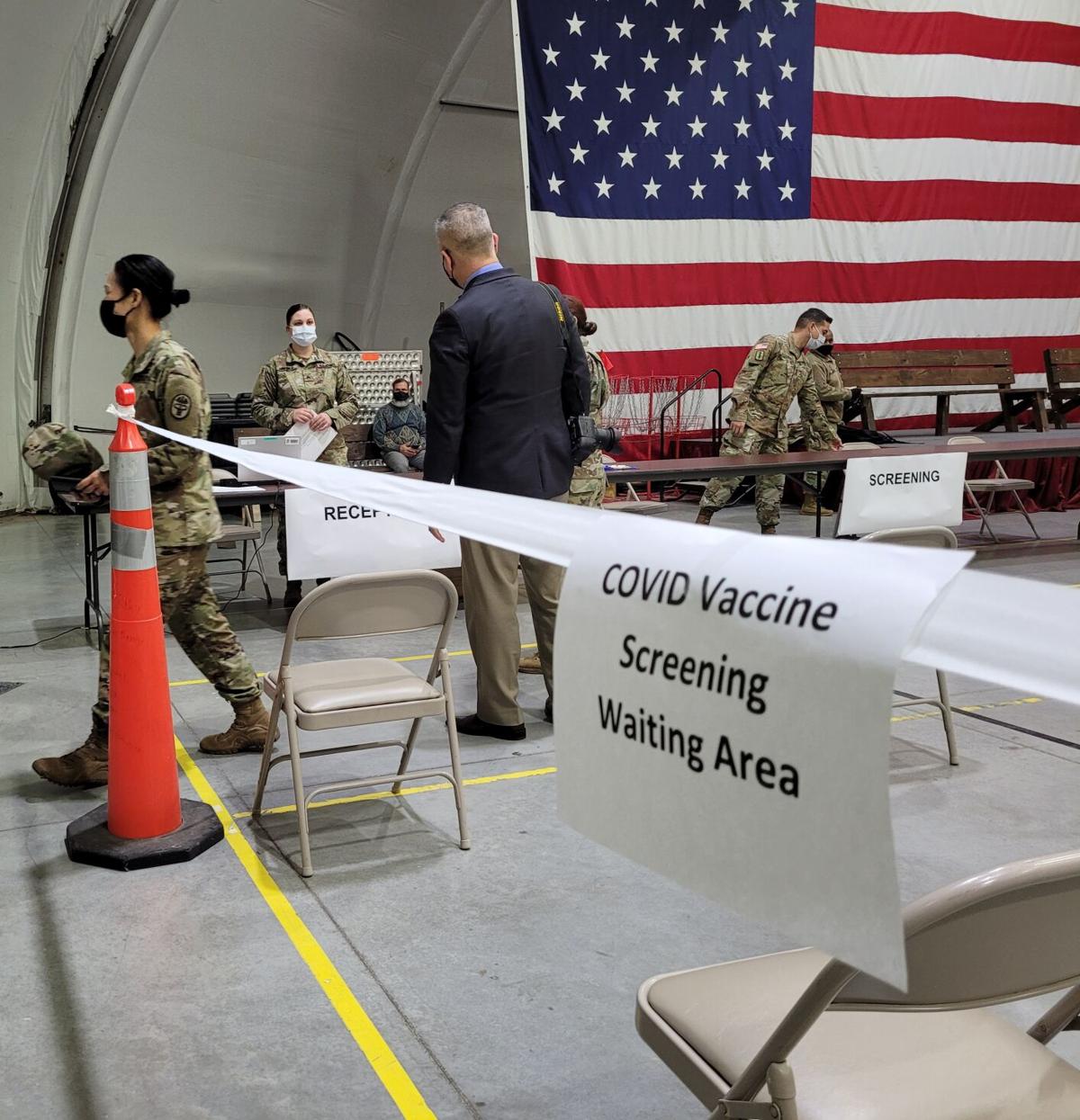 Irwin Army Community Hospital Commander Col. Edgar Arroyo answers questions from the media during a walk through of IACH's vaccine administration plan. The plan has been put in place in advance of the arrival of COVID-19 vaccines to Fort Riley to ensure the vaccination process goes smoothly.

Fort Riley Commanding General Maj. Gen. Douglas A. Sims speaks to the media Tuesday morning about the arrival of the new COVID-19 vaccine on Fort Riley. The post's doses of the vaccine have not arrived yet, but Fort Riley is practicing its system for when they do in order to ensure the vaccines' delivery is efficient.

The war against COVID-19 is hardly at an end, but there’s now a light visible at the end of the tunnel with two promising vaccines expected to arrive soon in Kansas.

Fort Riley has begun preparations to receive and administer doses of the new COVID-19 vaccines.

The Army base has not received its share of the doses yet and doesn’t know if it will end up with the Pfizer-BioNTech vaccine or Moderna vaccine yet, but it is preparing for either and practicing how it will administer them once they arrive, to make sure not a single dose is wasted. Once a vial off vaccine is opened, it has a limited shelf life and all of the 10 doses inside it must be used in a timely manner to ensure none goes to waste.

Commander of Irwin Army Community Hospital Col. Edgar Arroyo said his staff could vaccinate up to about 30 people an hour, if necessary. The whole process could take roughly half an hour per patient. Arroyo said patients who received the vaccine would be monitored immediately after receiving their shots.

“We'll have a waiting period,” he said. “We’ll make sure you sit down just like you would for a flu or any other vaccination just in case you have an immediate reaction and we will have emergency services available."

According to Arroyo, the first people to receive vaccines at IACH would be healthcare professionals, emergency services and installation essential services before moving on to those who might be deploying in the near future and high-risk individuals.

He believes vaccinations are a step in eventually eliminating COVID-19 entirely.

Commanding General of the 1st Infantry Division and Fort Riley Maj. Gen. Douglas A. Sims spoke Tuesday morning about the vaccines Fort Riley is preparing to receive, after taking a tour of the facility where the doses will be administered.

He said he was uncertain of when Fort Riley’s doses of the vaccine would arrive, except that it would be “in the near future.”

“We’ve rehearsed both,” he said. “We’re rehearsed for Pfizer and we’ve rehearsed for Moderna. And they are a little different in the way that we treat each. We have the ability to store the Pfizer here, we have the super cold storage facilities, so if we get Pfizer, we can use that. Moderna doesn’t require the same storage, so we can ... take care of that as well."

Medical staff have on post have rehearsed it several times now — what they’ll do when they receive the vaccines, how they’ll be stored, and how they’ll be administered to recipients.

When the vaccine arrives, it will be placed in cold storage according to the specifications for that particular vaccine. The vaccine will then be administered to high priority individuals such as healthcare workers and first responders who will have been determined before the vaccine arrives. Vaccine recipients will be brought to a makeshift hospital area called a clamshell, located in a tent outside Irwin Army Community Hospital, where they will be given their vaccinations after counseling.

Records will be maintained to ensure everyone who receives the vaccine is able to get the second dose when it comes time for them to receive it.

Sims said the process would be deliberately slow so as to ensure everything goes well.

“Slow is smooth, smooth is fast,” Sims said. “A very deliberate process to get everybody through.”

Speaking to IACH staff Tuesday morning and later to reporters who attended a walkthrough at the clamshell, he reflected on how the tables have turned for humanity with this vaccine.

“If you go all the way back to the winter of last year, the virus has had the upper hand,” Sims said. “So we have identified ways that we can prevent the spread of the virus, whether its this mask or social distancing or hand washing, but aside from that we haven’t been able to do anything that keeps the virus at bay and really helps us to break the chain. We’re finally at that point. So the vaccine offers an opportunity to stop the virus — to literally stop the virus. It’s our first offensive weapon against the virus."

He drew a comparison to the pandemic and World War II, comparing the deployment of the new vaccines to the 1st Infantry Division troops who stormed the beaches of Normandy on D-Day.

“We’re at the beginning of the end,” Sims said. “It’s also important to realize though, once we landed at Omaha (Beach) on D-Day back in 1944, we still had to fight across Europe to beat the German army. This is no different. We’re going to start, we’re going to land on Omaha Beach here inside this room, but we still have months ahead of us. So we still need to continue to mask, we still need to continue to social distance and to hand wash and to do all those things we know can prevent (COVID-19). In WWII, we lost just over 400,000 people. Right now, we’re on pace to do that as well (with COVID-19) in less than a year and we, if we do our things right, we can help to reduce that loss of life. In the process, we can administer this vaccine to kill the virus in the end.”

The vaccine will not be mandatory once it has arrived, Sims said. While a small number of people have experienced allergic reactions as the vaccines have been rolled out, he said he believed both vaccines to be safe and effective.

“We just need to continue to talk to people about the effectiveness of the vaccine,” he said. “In both cases — Moderna and Pfizer — the effectiveness is very, very high … The vaccine is safe and the process that the scientists have gone through to get the vaccine to where it is has been very thorough, so we feel very confident. We feel ready to stick it in arms."

Sims said Fort Riley had been “lucky” in its fight against the virus so far and that only a few COVID-19 patients had required hospitalization at IACH and that none of them had needed to be placed on a ventilator.

“Typically, the age and the fitness level of military personnel tends to deal well with the virus,” he said. “The large majority of the virus reactions have been mild. We have had a couple of hospitalizations."