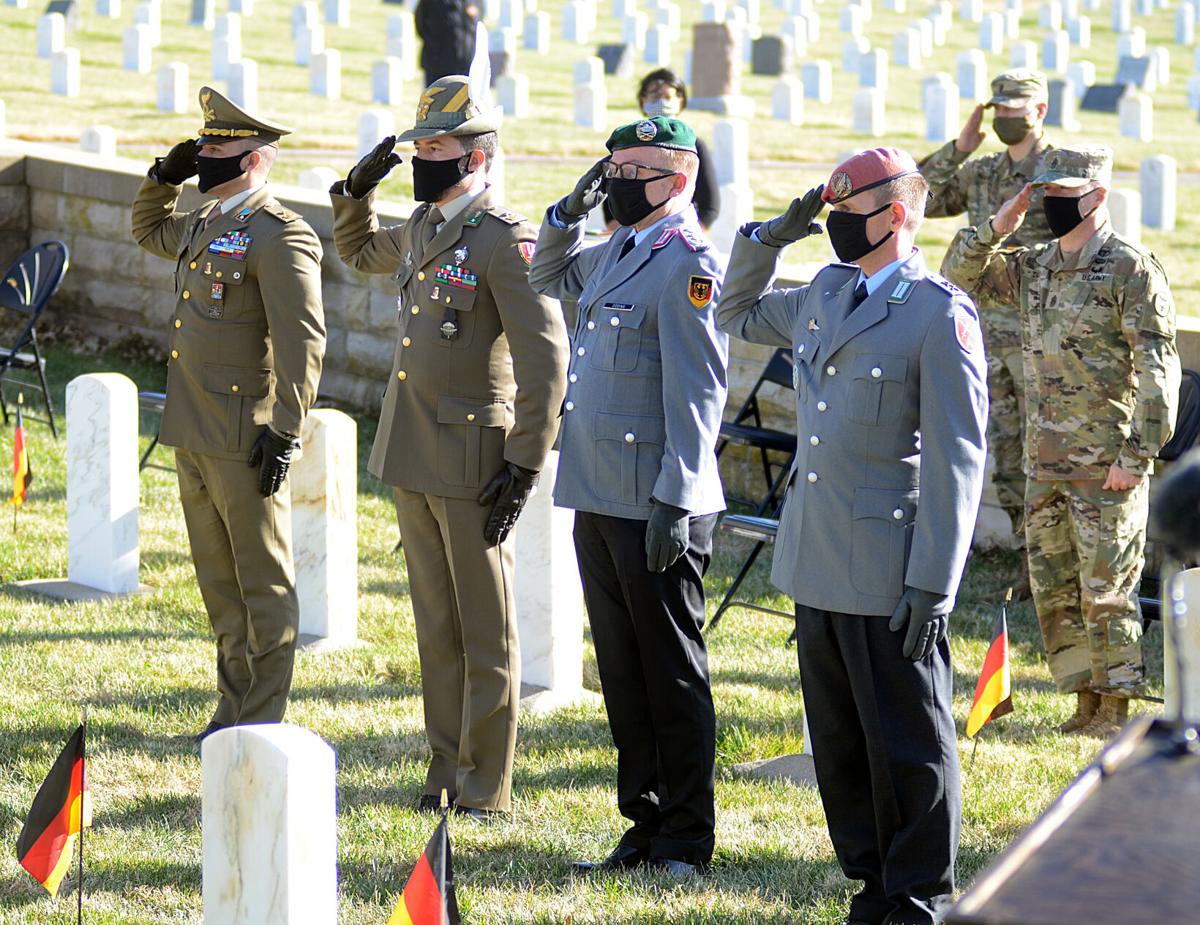 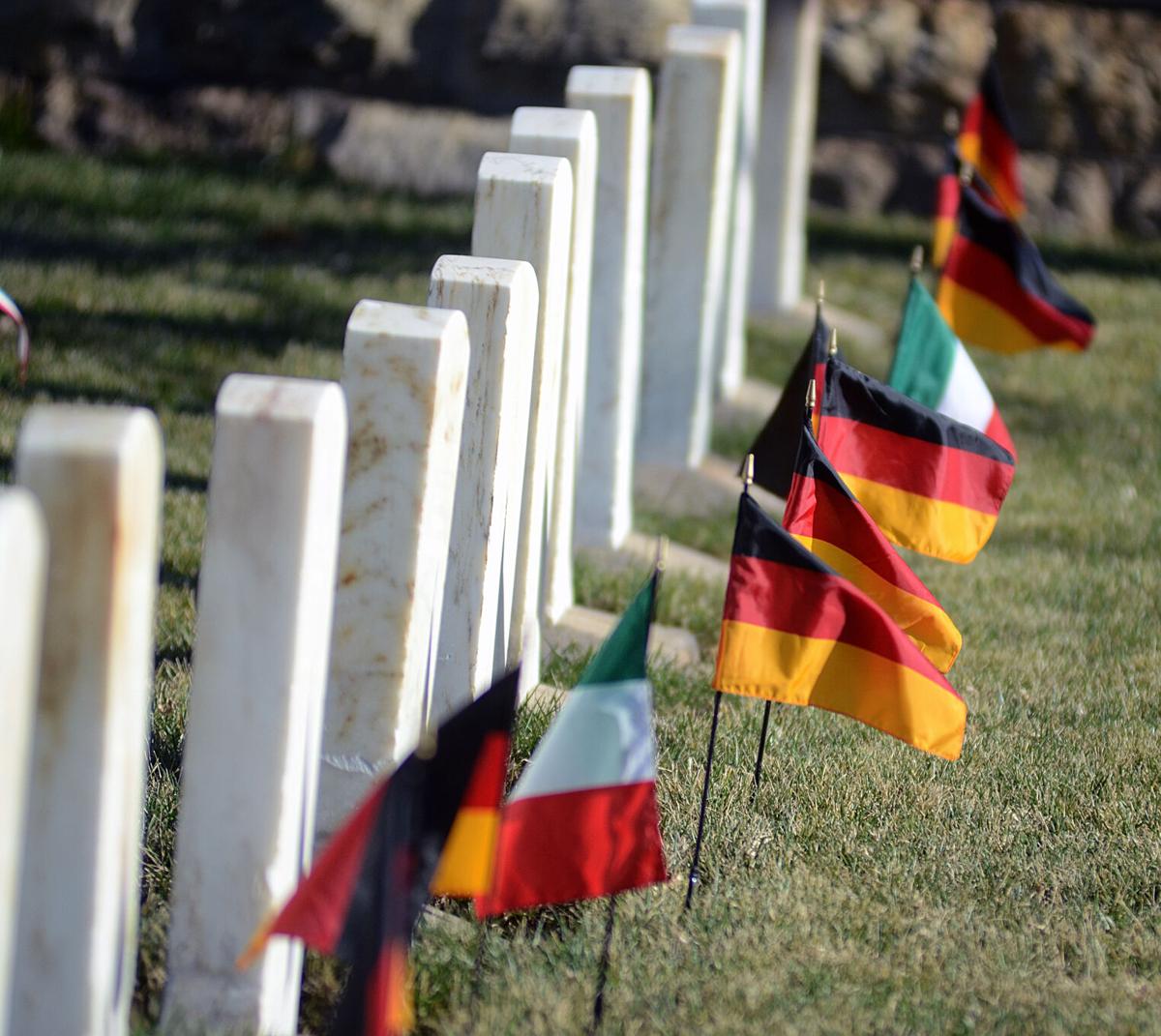 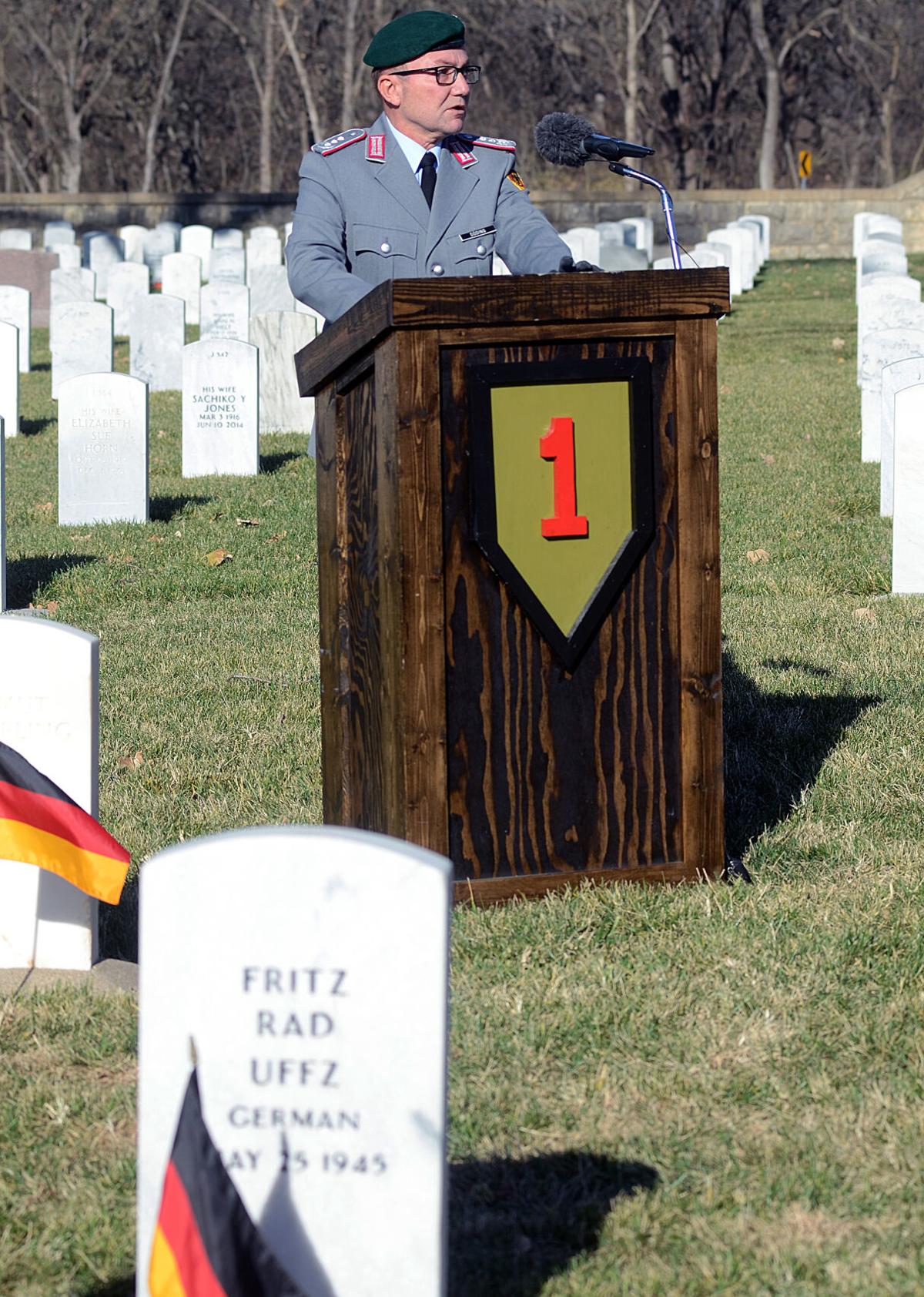 A three-round volley by members of the 1st Infantry Division honor guard broke the silence within the Fort Riley Main Post Cemetery Thursday morning during a ceremony honoring and remembering the 62 German and 11 Italian prisoners of war buried there.

From 1943 to 1946, Fort Riley was one of many Army installations hosting prisoners of war. They lived and worked on the installation until their post-war freedom.

“Every year in November it is very important for us to remember the soldiers who did not return from war and found their last resting place here on Fort Riley’s national cemetery,” said Col. Carsten Döding, German Liaison Officer, U.S. Army Combined Arms Center, Fort Leavenworth. “They died thousands of miles away from home, but are not forgotten. It is our obligation to pay our respects to them — especially when their families are not able to do so.

“They served their countries convinced they were fighting for the right cause,” he added. “Today, we know that my German countrymen had fought for unacceptable political goals. This peaceful site, however, gives the dead back their dignity and the living a place to mourn. Let us never forget that every victim has a personal story — every victim sorely missed.”

Döding and German Sgt. Maj. Oliver Wrobel recited a poem by Ludwig Uhland written in 1809 about a soldier losing a comrade in battle in both German and the English translation.

Following the German speech, Italian Maj. Alessio Battisti spoke of his gratitude for the soldiers to be remembered.

“Today, we stand together to remember and honor Germany's and Italy's lost soldiers of World War II,” he said. “The soldiers fell into allied custody while fighting for the country on the scorching sands of North Africa and the green valleys of Europe. Brought to the United States, they died alone on foreign soil, away from the Motherland and their families. As part of the traditions, military institutions dedicate a great deal of attention to their fallen members, especially those who made the ultimate sacrifice while fighting on the battlefield for their countries.

“However, soldiers that do their last breath while in captivity tend to be forgotten,” Battisti added. “Yet, in the circumstances like today's ceremony we can remember and ponder on the fate of our prisoners of war, who did not return. Despite the fair and respectful treatment, that I'm sure they received here in the United States, the soldiers spent the last months on Earth, suffering the monotonous and shameful conditions of captivity.”

During his speech, Battisti also thanked the soldiers around the world who are away from their families in service of their country.

“There is no better testament to the strong bonds linking our great nations that currently stand together against the oppression and injustice in defense of the stability and prosperity of the international community,” Battisti said. “Before closing, I would like to devote a respectful thought to all the soldiers who are now deployed, away from their families and loved ones in defense of the sacred ideals and institutions of our countries.”