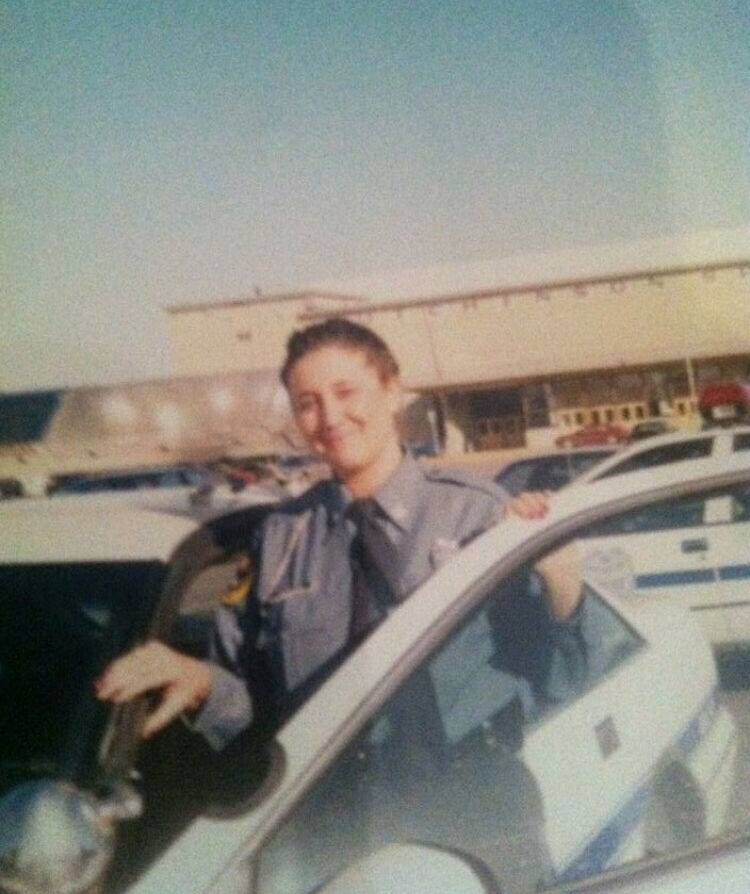 A photo from Trish Giordano's graduation at the Kansas Law Enforcement Training center in 1993. 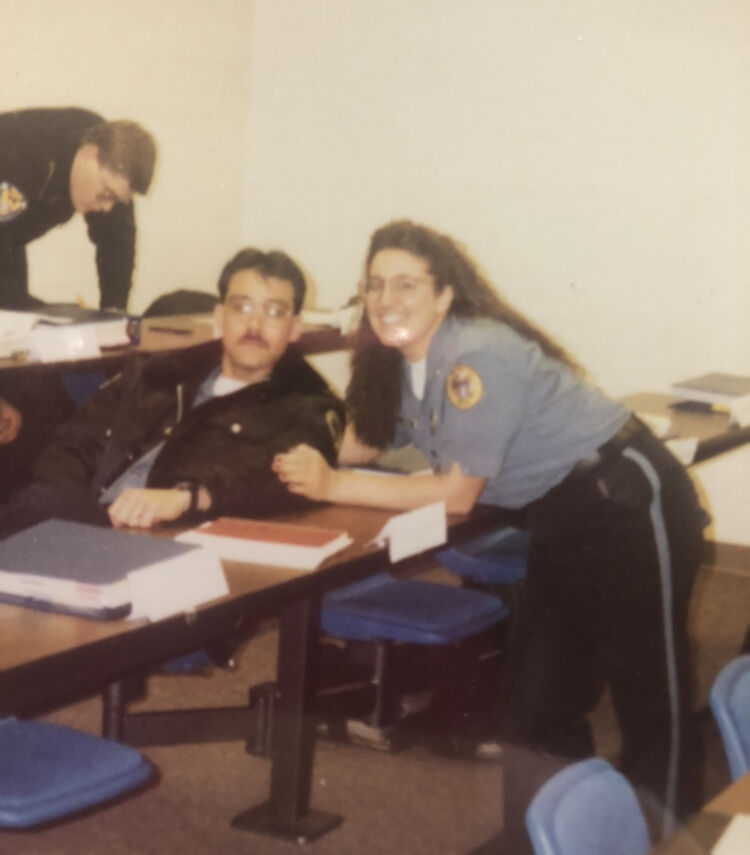 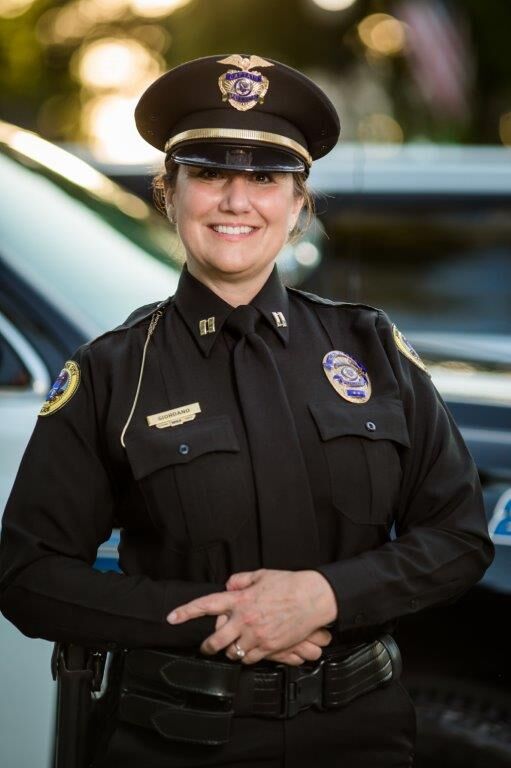 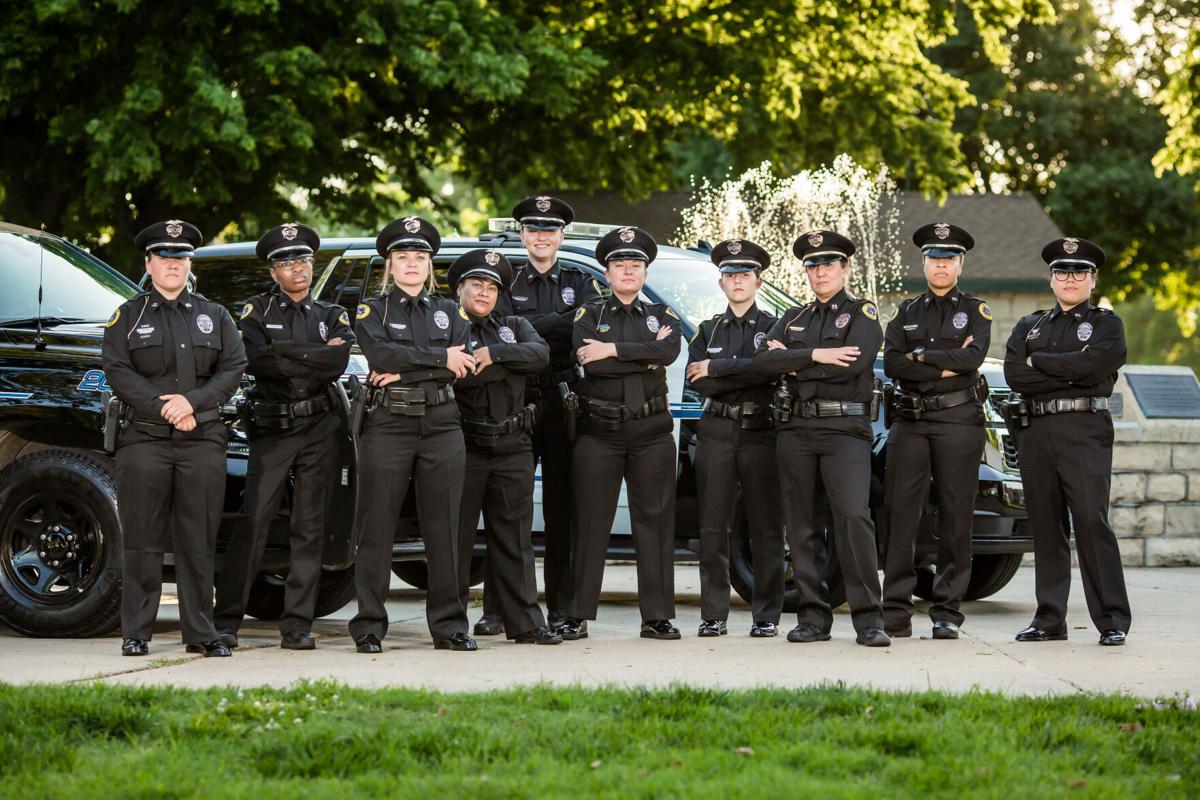 When Capt. Trish Giordano started her career, she was the only woman on the JCPD. Now, as she prepares to retire, there are about 10.

A photo from Trish Giordano's graduation at the Kansas Law Enforcement Training center in 1993.

When Capt. Trish Giordano started her career, she was the only woman on the JCPD. Now, as she prepares to retire, there are about 10.

In the late 1970s, a little girl sits on the floor, staring at the television, enraptured.

On the screen, a popular police drama — Cagney and Lacey — plays out, as Detective Christine Cagney and Beth Lacey work to crack the case, fighting both bad guys and sexist stereotypes as they go.

Policing, in the 1970s, is generally considered a man’s job, but that doesn’t matter to the girl.

Cagney and Lacey are her heroes and one day she knows she is going to be just like them.

The girl is longtime Junction City Police Department Capt. Trish Giordano, now about to retire from police work after 28 years with the JCPD.

In her career, Giordano was the first woman on the JCPD to be promoted to sergeant, then later to lieutenant and most recently to Captain of Investigations.

The desire to be a police officer sprang, she said, from a steady diet of police shows on television when she was a child, but her life in law enforcement didn’t start until her mid-20s, when then-officer Capt. Kirt Nichols urged her to apply.

She was hired along with seven other people, all males, in 1993.

At the time, there were no other women on the JCPD, Giordano said. There had been a few other women before her, but they hadn’t lasted long, according to Giordano. For the first six years, she was the only woman on the police force.

“When I first got hired, none of the officers wanted to train me,” she recalls. “It was unusual. But a lieutenant actually took me in his vehicle and went through training with me … It was a different time, I guess, back then. I don’t know if they thought I couldn’t handle myself or couldn’t protect them. Just different reasons they didn’t want to have to train me. So that was a big barrier.”

Lt. Phil Waters took Giordano under his wing, though, and worked with her for several weeks before she went on to the academy for further law enforcement education.

After completing her training, Giordano was on her own. Having passed the first tests, she still felt a need to earn her place on the JCPD.

“I think I was very proactive,” she said. “I did feel like I had to prove myself and go above and beyond. I would always volunteer for the busier areas and worked overtime a lot. I always volunteered to go on search warrants.”

As a rookie police officer, the JCPD's then-Captain of Investigations told her she’d never make it more than three years on the JCPD.

“Now I’m sitting in his chair,” Giordano said. “I’m very proud of my accomplishments at the police department and I hope that I paved the way for the girls that are there now."

As times have changed, so has the police department, in many ways.

There are now multiple women and minorities on the JCPD.

The department reflects the population, unlike so many police departments in other communities.

“Diversity, I think, makes everybody more well-rounded,” Giordano said. “Working with different races and cultures and growing up in Junction City helped me already be a well-rounded person … I think having our department look like that is very comforting to the community. And we are very blessed — Junction City is very supportive of our law enforcement. And I think the fact that we are diverse, we do community outreach stuff, helps that relationship."

The department now offers more accommodation for women officers than they did in the early 1990s. Paving the way for them is one of Giordano’s proudest accomplishments, she said.

Giordano was the first women to have a baby on their department.

For much of her career, she was a single parent, tasked with what she calls two of the hardest jobs on earth — police officer and mother.

No one quite knew what to do with a pregnant officer back then, Giordano said.

“I was on the front desk for a while,” she said. “But now we have different jobs that (pregnant officers) can do to help still keep them in law enforcement, still doing law enforcement stuff — just not in a dangerous way."

And it was uniquely dangerous to be a police officer in Junction City back in the day.

The community was different in the 1990s, with a crime rate comparable to much larger cities.

“They compared us per capita to Chicago, which was kind of crazy,” Giordano said of the crime rate when she started her career. “I think I probably got more experience in the first three years I worked at Junction City than some of our new officers get in five or eight years."

The community, in those days, was rife with drug crime and prostitution.

Often, young male officers did undercover work, posing as johns, picking girls up from the street corners and then arresting them.

When she first started, Giordano also found herself working undercover, as a prostitute instead of a john.

She would stand on a street corner and wait for someone to come solicit her for sex, after which she would arrest them.

“That was an experience in and of itself,” Giordano said. “A lot of (the johns) weren’t military like you’d think. They were K-State students and farmers."

She didn’t just do this undercover work in Junction City.

“In Topeka, they had burned all their female officers, so they asked me one time to go up there,” Giordano said. “That was a little intimidating, because I didn’t know those officers like I did the officers back in Junction as my backup."

“People ask me all the time, ‘were you ever scared to be a police officer,’” she said. “If you’re not scared or cautious, that’s where you get hurt. So I was aware of the dangers and took caution that way. I was never too scared to try to do my job, but if you’re not scared, that’s what’s going to get you hurt.”

Giordano is not working undercover anymore. She has reached the end of her law enforcement career as the JCPD’s Captain of Investigations, where she oversees the drug task force, the general detectives and the evidence lab.

These days, Junction City is much quieter, something Giordano chalks up to good policing and local programs that help people better themselves.

"The crime rate has totally changed, which is good,” she said. “I feel like that was a combination of good police work, us cleaning up some of the neighborhoods with self-help housing — we were real big on blight back then."

Self-help housing was a program the city offered in the past to help clean up dilapidated homes and simultaneously allowing people who might not otherwise be able to buy a home to afford one.

“On East Sixteenth Street and Monroe, there were a lot of dilapidated houses, little cottages that were just crime infested, drug infested,” she recalls. “It was a grant that they would get I think six families at a time and all of them would help to build a house — each of their houses — and nobody could move in until all the houses were done.”

The more help neighbors offered each other, the sooner they could all move into their new homes.

It rehabilitated the neighborhood. As people had the chance to better themselves, crime went down.

It is in this way that she hopes to continue serving, even after she no longer wears a uniform and a badge.

Giordano will retire as of Dec. 1. In mid-January, she will take her seat as Geary County Commissioner for District 1 after winning the election earlier this month. Giordano has chosen to leave the JCPD due to a conflict of interest she would have as both an officer and a sitting county commissioner. She doesn’t believe she will ever return to law enforcement, though she will miss it.

“I feel like law enforcement is a calling and that was not only what I did, it’s what I am,” she said. “And so I’m a little nervous on how that’s going to feel when I wake up and I’m not a police officer anymore. So I have mixed feelings. I think I’ll always hold a place in my heart for law enforcement and always care about the community that I served for so long."