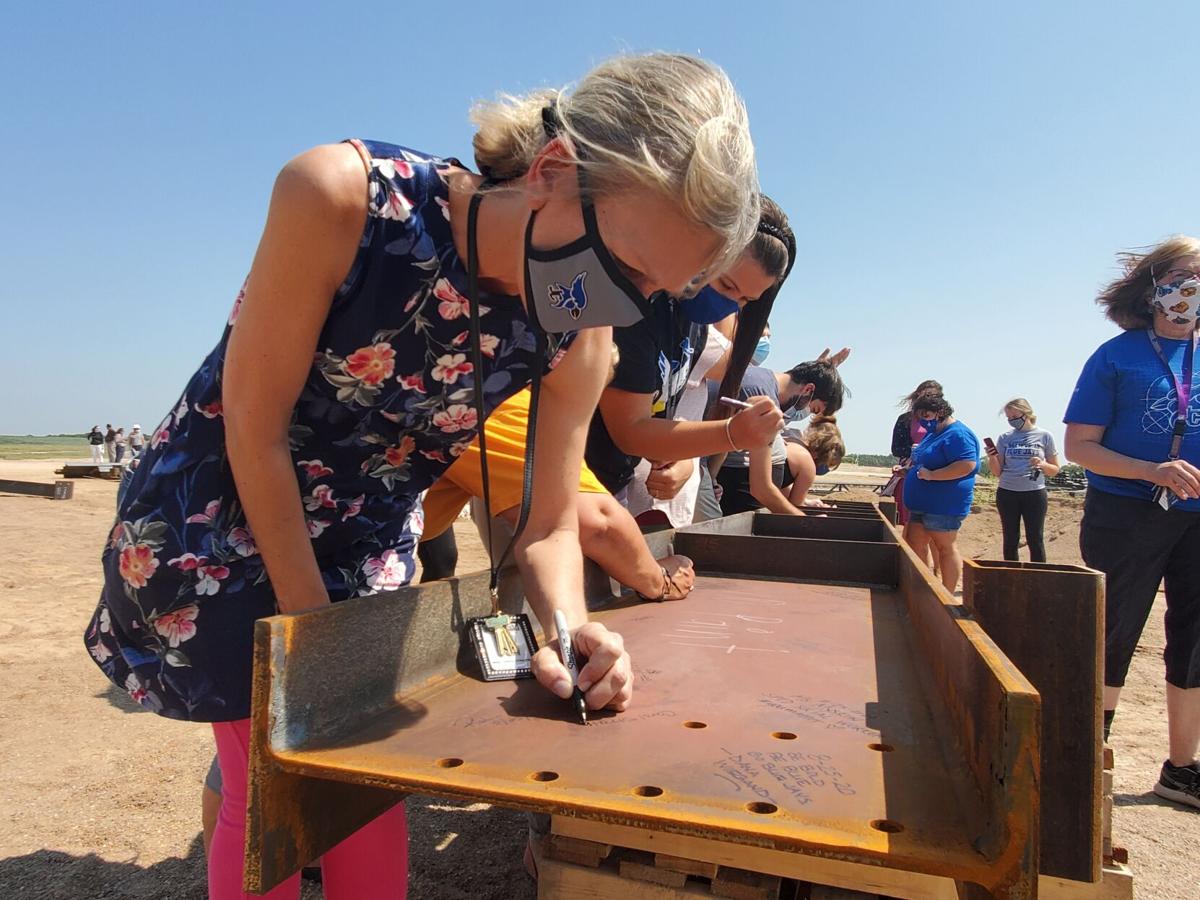 JCHS Gifted Educator Carol Strathe signs her name on a steel beam that will go into the new Junction City High School. Educators signed the beam after taking a tour of the school-in-progress Tuesday. 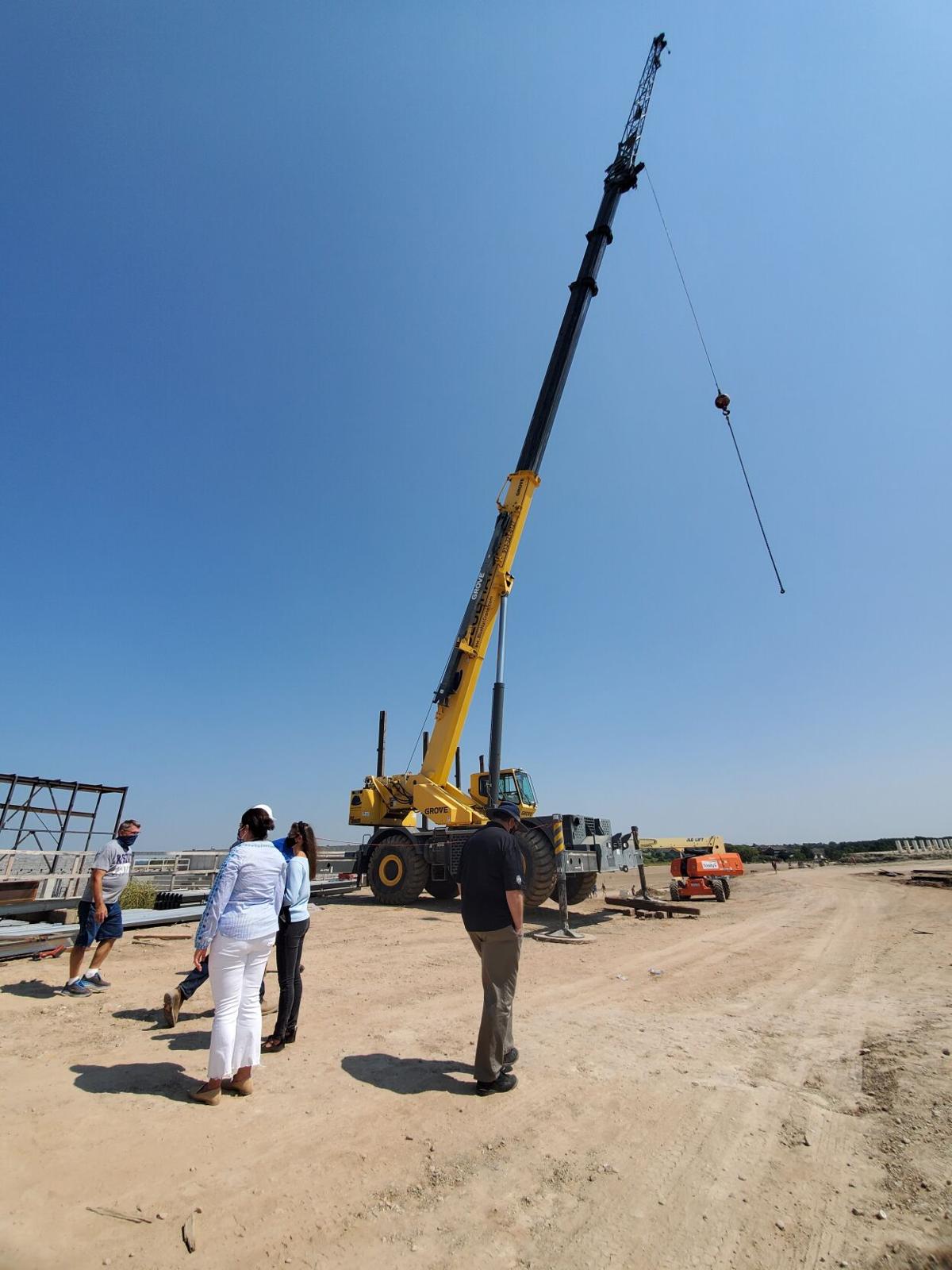 JCHS Gifted Educator Carol Strathe signs her name on a steel beam that will go into the new Junction City High School. Educators signed the beam after taking a tour of the school-in-progress Tuesday.

Construction on the new Junction City High School continues to progress and Tuesday afternoon, JCHS educators had a chance to take a sneak peak inside the new facility as it is being built.

Staff went on guided tours through the unfinished facility.

According to Unified School District 475 Chief Operating Officer David Wild, the groups saw the area where the freshman academy will be located, the other academy spaces including classrooms, the auditorium, the main and auxiliary gyms, the commons area, athletic areas, and the location of what is to be the new football field, among other things.

Wild said he felt it was a good opportunity for JCHS staff members “to see the project starting to come together” and get excited about it.

“What they were excited about was the options that were going to be available to the students,” he said of comments he heard from staff about the new school.

Everything is unfinished as of yet, but educators displayed obvious happiness as they went through the areas of the new school where they would teach.

“I’m kind of partial, but I like all the little breakout rooms and the access classroom,” she said.

The access suite, when completed, will allow special education students to practice lifeskills they’ll need to go out into the real world, including how to do laundry, clean and prepare food for themselves.

"I think what was good about this tour is it's giving everybody on staff an opportunity of seeing what the future is going to look like,” he said. “We're only a year out basically, and so now they can actually start planning for that future and how they're going to utilize the facilities."

Sallee, for his part, enjoyed seeing the areas where his academy will be housed.

“I think it’s designed right, it’s built right,” he said of the parts of the school his students will utilize. "I believe the auditorium is just going to be an exceptional performing arts center. I believe our classrooms for our performing arts supports that center very well. And we have great instructors that are going to be supporting those classes."

Sallee feels the orchestra room, which will double as a tornado shelter and which was a last-minute add-on that had been debated by the USD 475 Board of Education, was an important addition. It will, he said, support the school’s string instrument program.

"I'm excited about that,” he said. “Those string students are just going to love to have that dedicated facility, one they haven't had for, really, for two years. We got an early childhood development program that's supported by two classrooms, and one of them's going to be a Pre-K satellite program. It’s really functional.”

The facility, Sallee said, does not just support the performing arts but also tech-ed, college, and career readiness for students.

He believes it will support the community as well.

Sallee feels it will be a draw for the military community. He said he believes word will spread that JCHS is a good school with a good facility and that military members will consequently want to send their children to school here.

"I just think that's going to bring more of our military service members and their families asking for Fort Riley as a duty station,” he said. "I think that then helps our community. I will tell you, too, that we're centrally located. It's going to help us with events. Between athletics and activities and performing arts, we can bring in a lot of individuals from north central Kansas as well to events here. I just think it has this huge potential of being a showcase high school."

The school is on track to open its doors to students next year, according to Wild, with a ribbon cutting in early August of 2021.