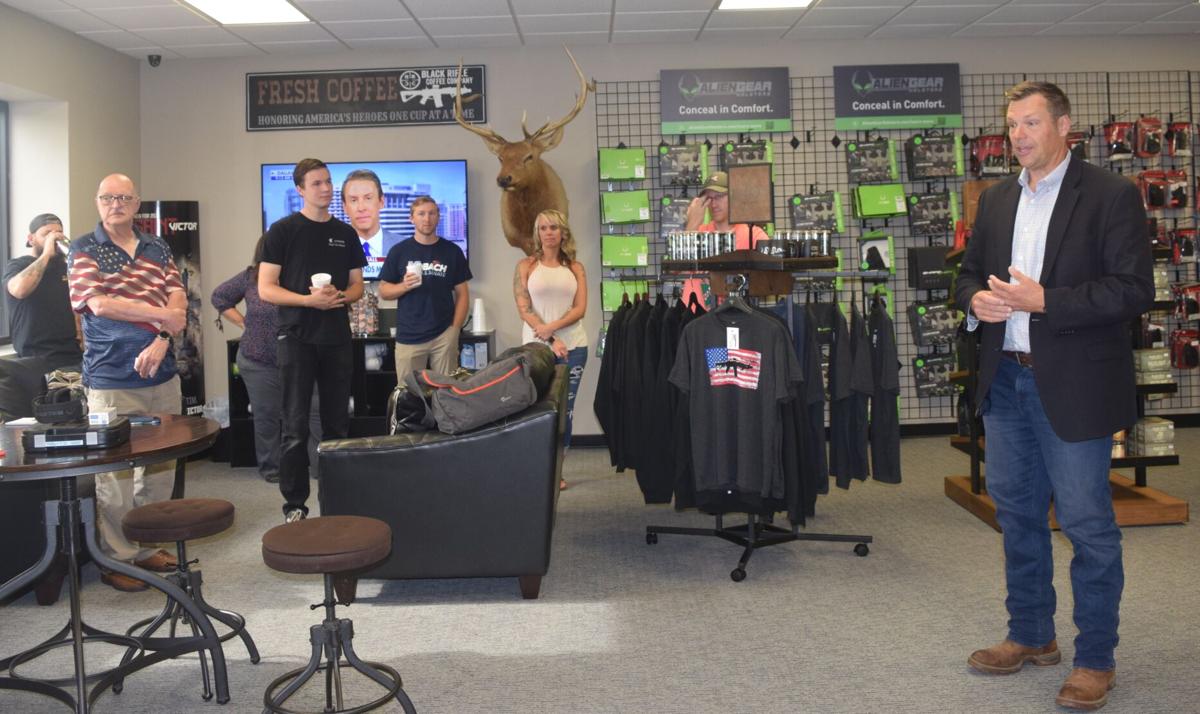 Kris Kobach, a candidate for United States Senate, talks to supporters during at gathering at Godfrey’s Indoor Ranges during a campaign stop in Junction City. 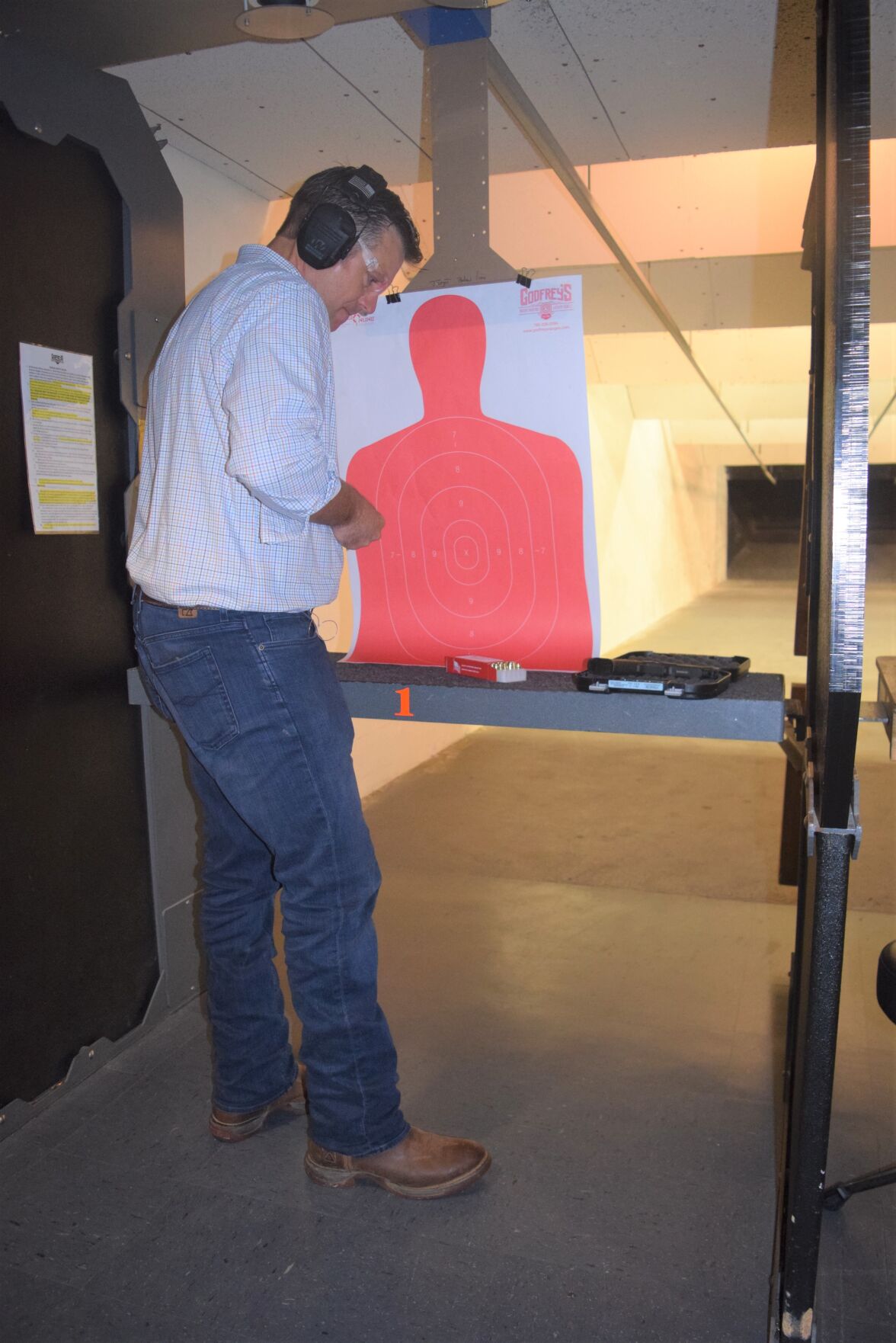 Kris Kobach, U.S. Senate candidate, stopped in Junction City Friday to speak with supporters. He talked about a couple of issues that he is passionate about and visited with community members about their concerns. Before getting back on the road, Kobach took in a little target practice at Godfrey’s Indoor Ranges where the campaign stop had taken place.

Kris Kobach, a candidate for United States Senate, talks to supporters during at gathering at Godfrey’s Indoor Ranges during a campaign stop in Junction City.

Kris Kobach, U.S. Senate candidate, stopped in Junction City Friday to speak with supporters. He talked about a couple of issues that he is passionate about and visited with community members about their concerns. Before getting back on the road, Kobach took in a little target practice at Godfrey’s Indoor Ranges where the campaign stop had taken place.

Kobach spoke on issues of second amendment rights and transgendered athletes before answering questions from a small group of his supporters.

Leading into his second amendment comments he discussed the availability of guns and ammunition with Todd Godfrey, owner of the store and firing range, who told him he limits the amount of ammo he sells at one time.

“One box each (caliber),” he said. “It’s a struggle in this industry, it really is — from political issues, mental health issues, the protesting, which is still occurring — people are nervous.”

“This is worse,” Godfrey said. “We have two people dedicated every morning to looking for firearms and ammunition on the computer.”

Kobach then turned his attention to his second amendment, which he supports and vowed to protect should he be elected.

“I think people are recognizing just how fragile our Second Amendment rights are,” he said. “The DC verses Heller Supreme Court decision in 2008, which for the first time, recognized officially … that we have an individual right to keep arms. The Supreme Court declared very clearly we each have an individual right to keep and bear arms for our own protection for sporting uses and for a wide variety of uses. But that was a five to four decision.”

He said he believes it is “highly likely” that if presidential candidate Joe Biden is elected that the next supreme court nominee will be someone who thinks the second amendment can be written out of the Constitution.

After speaking about the importance of protecting the Constitution, he turned his attention to a second issue — trans athletes participating in women’s sports.

Records in several women’s sports including cycling, track and field and weightlifting are held by trans athletes. The issue pits the rights of a trans woman to participate in the sports she loves with the argument that they have an unfair advantage because of their biological makeup.

“If we don’t do anything about this, next year it’ll be six sports and the year after that it’ll be more sports and this is, I think, fundamentally wrong,” Kobach said. “I do not think there’s a coherent argument in favor of allowing biological males to compete in women’s sports.”

He expressed concern that sports scholarships will go to trans women and eventually there will be an unfair advantage given to the trans athlete.

Title Nine, which helped create women’s sports programs with federal assistance at the collegiate level gives women the opportunity to compete in sports at the same level, with the same financial assistance in college scholarships as the men, he said.

“(Women) gain all kinds of character advantages — you get the thrill of victory, the agony of defeat, the scholarship opportunities, the personal growth that comes through athletics,” he said. “And now, we’re allowing it to be destroyed. It’s just not fair when a biological male can come in with physical advantages and compete in the women’s sport.”

As a father of five girls he expressed his fear that some of their opportunities could be overshadowed by trans athletes.

After opening the floor for questions, he answered several concerns about keeping a Republican majority in Washington and how to fight back against the Democrat’s policies and voiced his opinion on some of the differences between the two parties.

“I think it’s a correct observation to say that the Democrats in Congress have always commanded a higher level of discipline among their ranks,” he said. “They don’t tolerate people having different points of view, in their Congressional Caucus. The Republican Party always seems to have more difficulty getting its members to vote for the Republican agenda for the platform, and things that in theory, people should be in favor of if they’re running under the Republican banner.”

In contrasting the two parties as the country deals with COVID-19, he said the Republicans tend to believe that counties should decide what should be done and people should be responsible for their own choices. Democrats on the other hand believe there should be direction from the top.

“I think there’s a definite worldview difference between the left and the right in America, and the coronavirus shutdown has illustrated that,” he said.

In response to a question about “why it became fashionable to politicize COVID,” Kobach was quick to put the blame squarely on the Democrats.

He quoted former Chief of Staff Rahm Emanuel saying “never let a crisis go to waste” and pointed out what politicians were doing on the left, which he equated to their politicizing the virus.

After wrapping up his discussion, Godfrey took Kobach on a quick tour of his businesses. Before Kobach ended his visit, he took a moment to get in some target practice at the range.