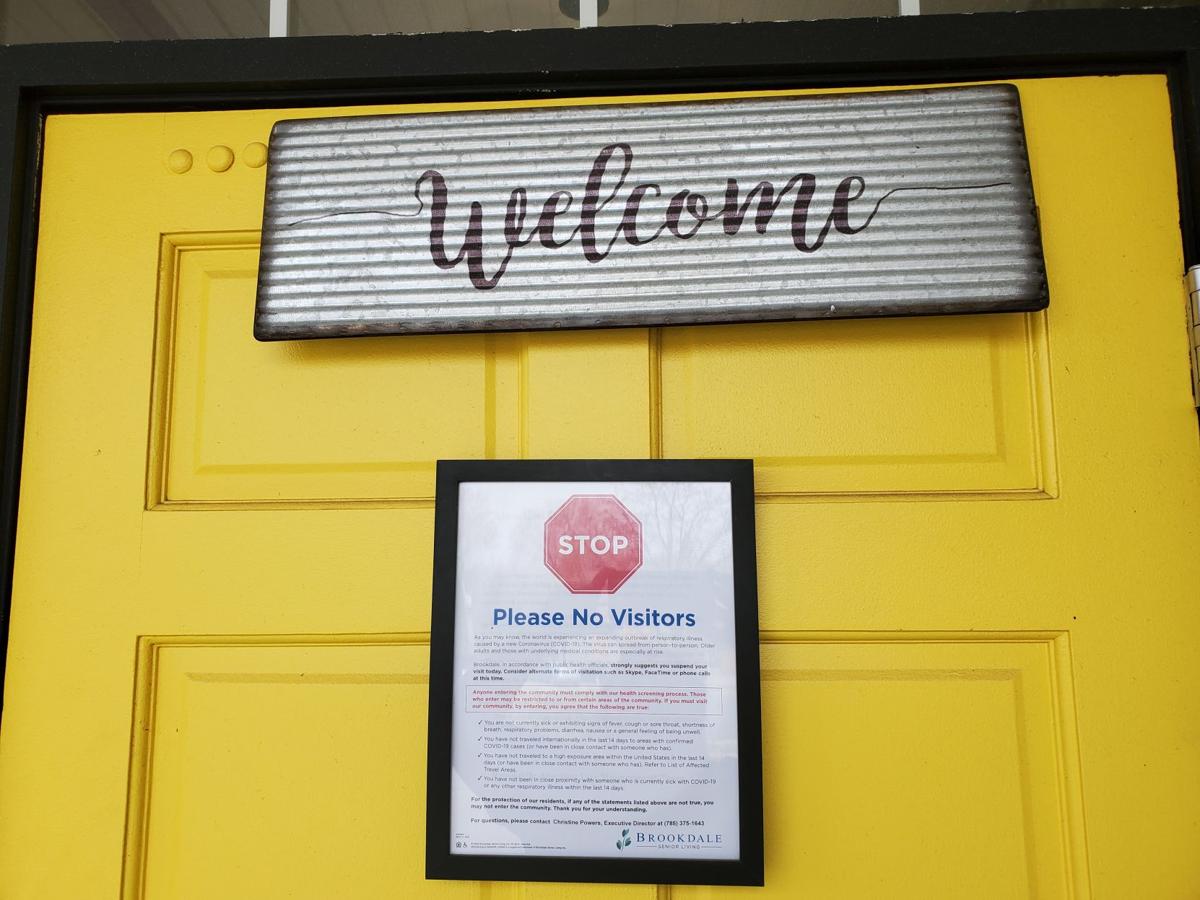 Beneath the usual “welcome” sign, a notice posted on the door of Brookdale of Junction City warns visitors away in light of COVID-19, which continues to spread around the state. 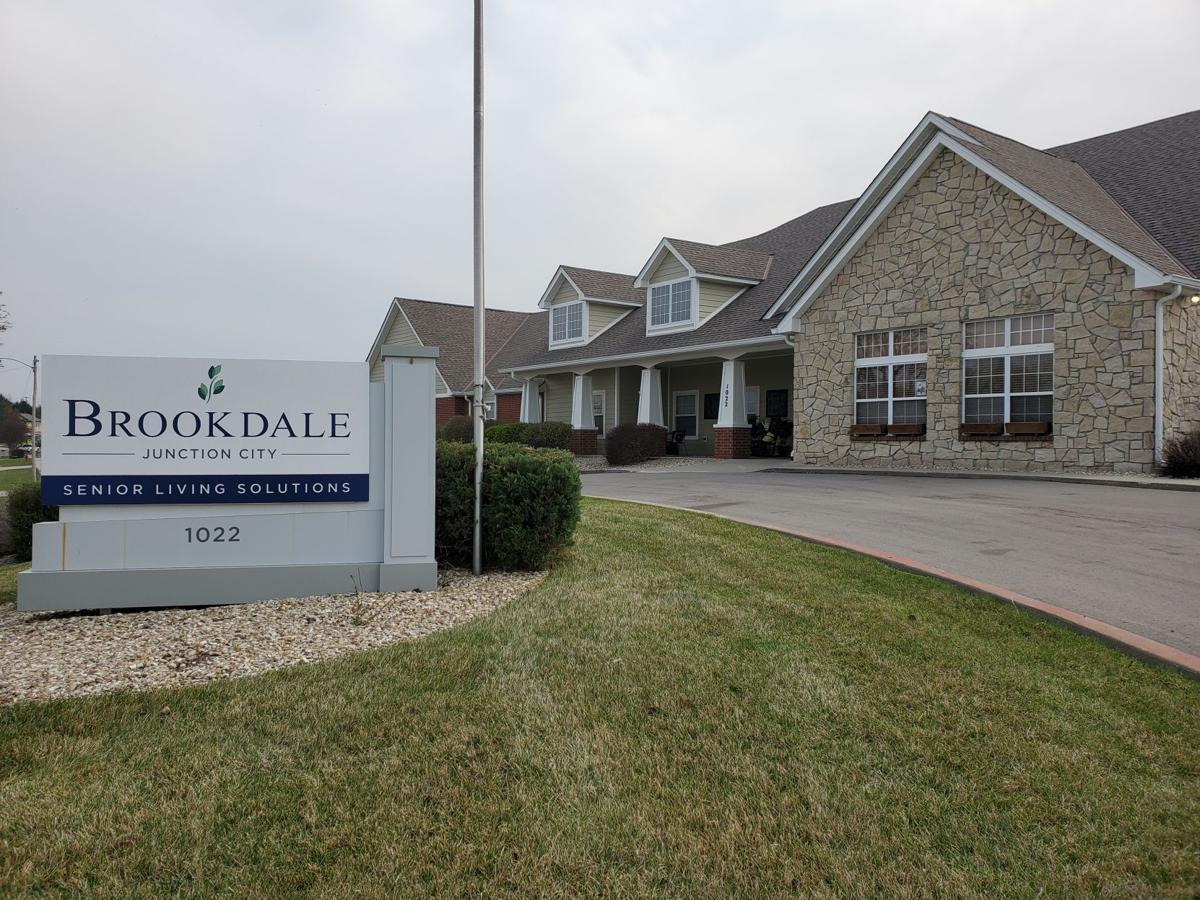 Brookdale of Junction City and similar facilities have had to make temporary changes to its policies to keep residents safe from the rapidly spreading COVID-19.

Beneath the usual “welcome” sign, a notice posted on the door of Brookdale of Junction City warns visitors away in light of COVID-19, which continues to spread around the state.

Brookdale of Junction City and similar facilities have had to make temporary changes to its policies to keep residents safe from the rapidly spreading COVID-19.

While COVID-19 can kill anyone — it doesn’t discriminate — it holds a special risk to the elderly.

People older than the age of 60 are considered a high-risk group.

So it goes without saying that people in assisted living facilities are at risk from this illness.

Facilities have taken action to protect residents, banning visitors and clamping down on the usual schedule of activities.

However, this can throw a wrench in residents’ social lives at a time when they need enrichment badly.

They make do with what they have — something that requires an extra dollop of creativity and more time for staff members.

Resident Program Director Kristie Moon from Brookdale of Junction City said her facility had to shut out all non-staff visitors, from regular service providers to family members.

Moon makes up for the inability to have beauticians in by cutting hair and doing pedicures herself, she said — something she has experience with from past jobs.

She has started offering virtual tours, something she calls “travelogue Tuesday,” in place of the group’s usual outings in the community.

The week of St. Patrick’s Day, the Brookdale group “traveled” to Ireland virtually.

Last week, they visited Sweden over the internet.

Today, they head to Mongolia.

Each Friday, Moon said, they have a “socially distant social hour,” which includes snacks from the country they just “visited.”

Visitors may not be allowed in the building, but they can interact via signs outside the window.

FaceTime Fridays are also a thing, Moon said, where she and her staff set up time for residents to interact online with family and friends. She has also taught residents how to shop online, she said, and regularly fetches residents’ requests from local shops.

The workload has increased — Moon recently clocked about 84 hours, she said.

Staff is screened upon entry and upon exit for symptoms of COVID-19.

The dining experience has changed for residents as well.

“So we have one person to a table and we’ve kind of turned our living room into an extended dining area as well,” Moon said.

Residents, she said, have so far not voiced major objections to restrictions.

“I didn’t know what to expect, you know, but I haven’t heard one disparaging thing,” Moon said. “ It’s always been, ‘we have to do this and ‘it’s for the greater good.’ So they’re actually very supportive.”

Moon speculates that this might be because some of them lived through times of deadly disease themselves.

Residents, she said, were alive at a time when they were at risk from diseases such as smallpox and polio.

“I think that’s why they’re so supportive of this isolation or the stay at home order,” Moon said.

Resident Joanne McKenna, communicating by phone from her room in the residence, said she understood the measures that had been taken.

A former nurse, she said she had never seen anything quite like COVID-19 in her lifetime.

“We have had other communicable diseases but not to this extent,” McKenna said. “I will be glad when it’s over.”

She isn’t happy about all of the restrictions, she said. McKenna is uncertain, she said, about the choice to close schools.

However, she said she understands the need to stop the spread,

That doesn’t make the isolation easy. Sitting at separate tables six feet away from their dining companions is less than ideal, according to McKenna.

“It’s a little lonely,” she said. “I understand the need, but I don’t particularly care about it. I understand the reasoning behind it. And not seeing your family is hard.”

She hopes efforts can slow down the spread of the virus and that things go back to normal sooner than later.

“We can only hope,” McKenna said.