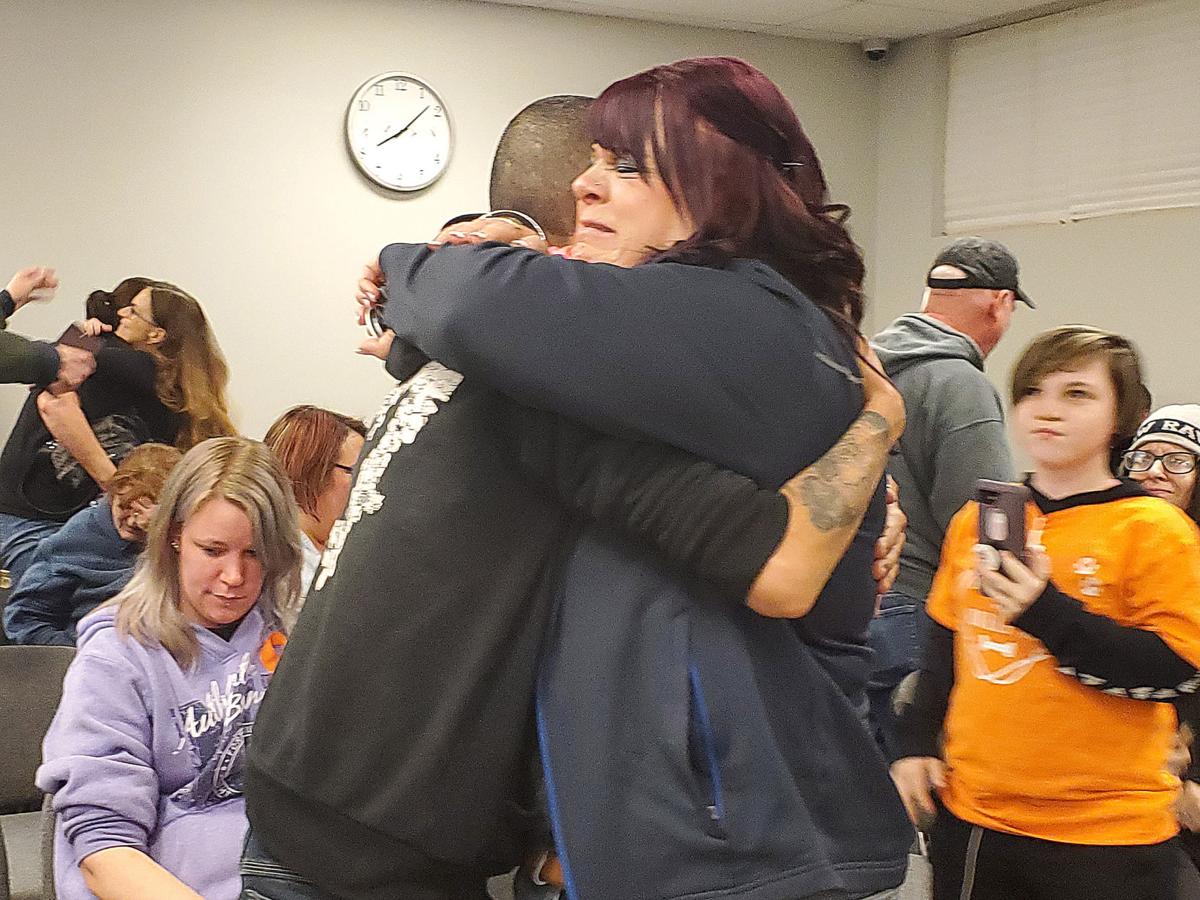 Emily Fawcett (right) receives a hug from Legalize Bully JC member Natasha Santiago and cries with joy and relief Tuesday night after the Junction City Commission voted 3-2 in favor of lifting the pitbull ban, which has been in place for about two decades. 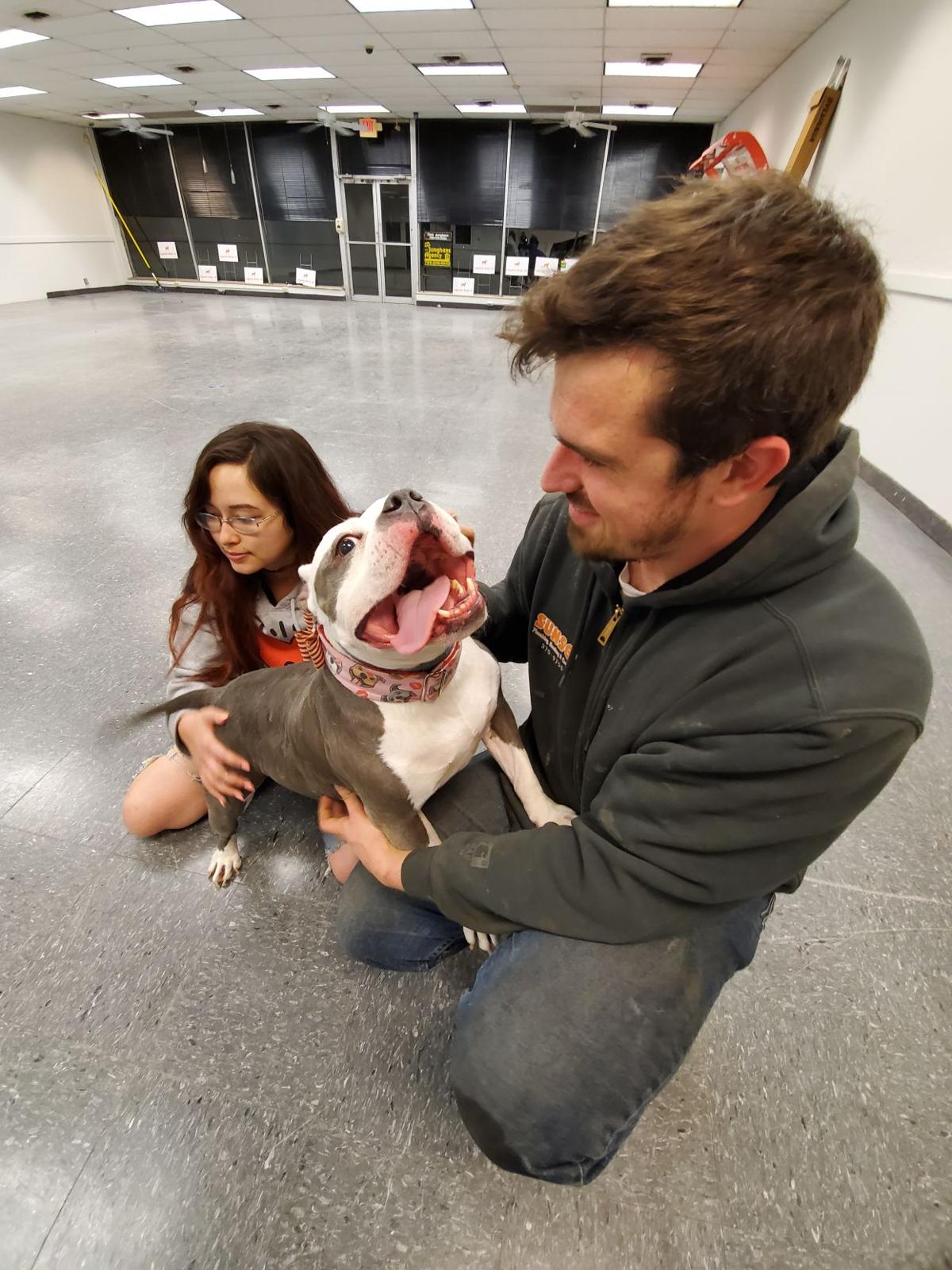 Rachel Jones and and Thomas Day play with a pitbull dog at a post-city-commission-meeting afterparty at the former location of the Pampered Pet, held to celebrate the lifting of Junction City’s pitbull ban. 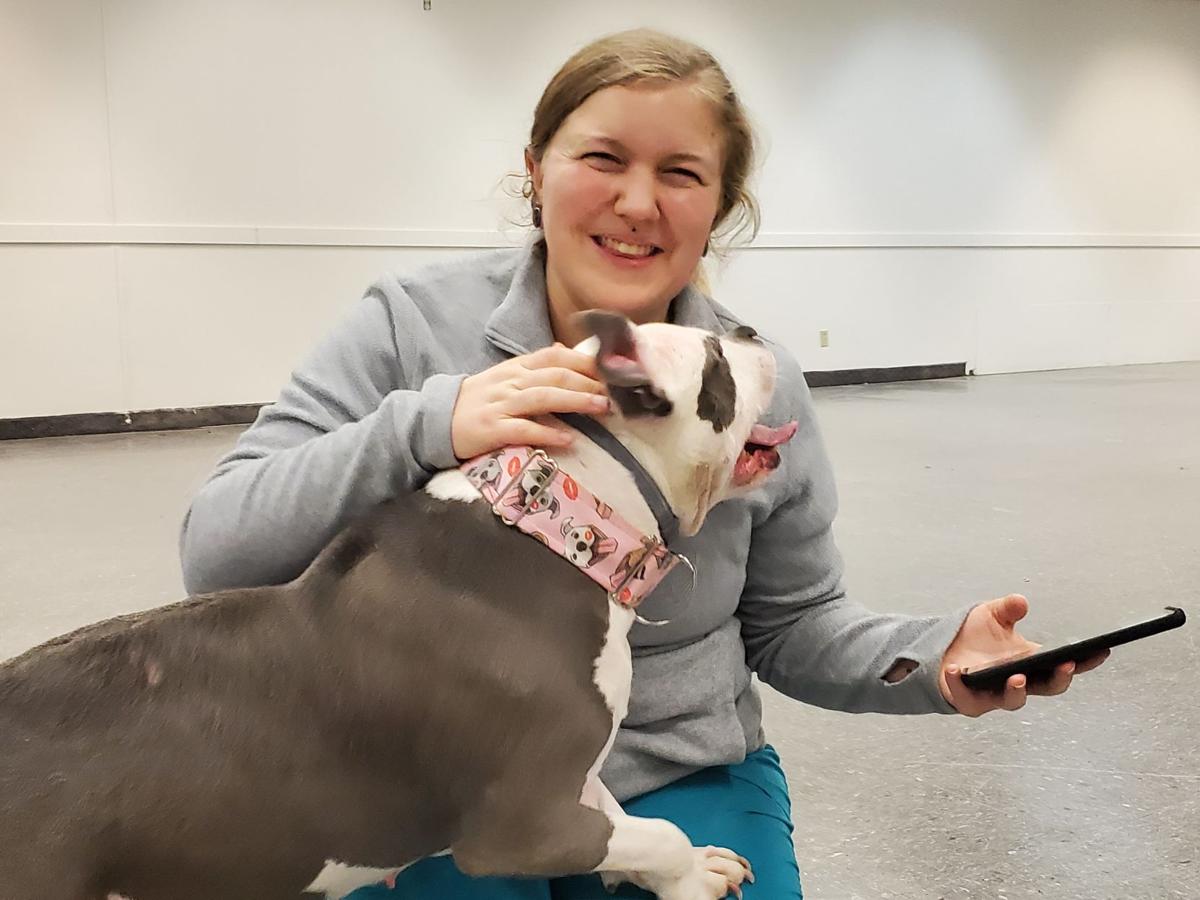 Emily Fawcett (right) receives a hug from Legalize Bully JC member Natasha Santiago and cries with joy and relief Tuesday night after the Junction City Commission voted 3-2 in favor of lifting the pitbull ban, which has been in place for about two decades.

Rachel Jones and and Thomas Day play with a pitbull dog at a post-city-commission-meeting afterparty at the former location of the Pampered Pet, held to celebrate the lifting of Junction City’s pitbull ban.

Applause from a roomful of constituents greeted the Junction City Commission Tuesday night, when it voted 3-2 in favor of repealing the city’s longstanding ban on pitbull-type dogs.

There will still be stipulations in place for pitbull owners within the city. Only two pitbulls are allowed per residence and dogs must be chipped, spayed or neutered and registered with the city. To legally own a pitbull within the city limits, people must not have a prior felony drug conviction.

According to City Attorney Britain D. Stites, the ban was initially put in place due to pitbulls’ popularity with drug dealers within the city limits.

There had initially been a muzzling requirement among the rules for pitbulls in the city, but it was removed before the ordinance came before the city.

Landes and Butler both said they felt pushing the issue to an election would be costly for the city. Butler said he had once been in favor of the ban, until researching it. Both he and Landes talked about pitbulls owned by family members. Larson said through research and through talking with employees at the Junction City/Geary County Animal Shelter, she had come to believe the ban should be removed.

“I think we still have public safety in mind,” she said. “We don’t want anybody to be hurt — another animal, or person, or anything — but I think if we have certain parameters put on the repeal, that will limit anything that could happen in the future.”

Only weeks ago, Underhill had indicated that he was willing to vote to repeal the ban, but by meeting time Tuesday he had changed his mind.

“(It’s) nothing against anybody in this room or 99.9 percent of the owners that have reached out to us and contacted us … (The ban) is a small way for us to help regulate the owners,” he said.

Brown has been in favor of keeping the ban since repealing it first came into question.

“This has always been a public safety issue. If you fault me for that, so be it,” he said. “I’ve always wanted the citizens of my community to be safe. I believe there is a danger — there’s a high probability based on percentage of fatalities and serious bites that these dogs — in the hands of a bad owner — are capable of doing these kinds of things.”

Brown is a former Junction City police officer who once served as the community’s Chief of Police. He worked in law enforcement for more than 37 years and talked about two incidents involving pitbulls which he saw during his time with the Junction City Police Department.

He requested that the JCPD provide a yearly count of dog bites in the city every January and present it to the city commission for review.

The ban, prior to Tuesday night, had been in place for about two decades. The city still has a dangerous dog ordinance, but all breed-specific language has been removed.

For Emily Fawcett, founder of Legalize Bully JC and former owner of the Pampered Pet, Tuesday night’s vote was the culmination of two years’ work.

When the vote was cast, she lowered her head into her hands and burst into tears.

“This is indescribable — it’s amazing,” Fawcett said. “I’m usually somebody who can you can’t shut me up and right now I just don’t have words for how I feel. It’s pretty good.”

In her remarks to the commission, before the vote was cast, she laid out a few of the things that led to her to take up the battle against the ban in the first place.

She said her fight was, in part, related to a dog named Einstein — her father’s service dog, now retired, who happened to be a pitbull. The dog was found on the street in front of Junction City High School about eight years ago, Fawcett said.

Fawcett’s father suffers from Parkinson’s disease and a dog with a shorter stature such as a pitbull made an ideal service animal for him.

So, she said, dog and owner formed a bond.

“One day my dad got really sick and went to the hospital for a very long time,” Fawcett said. “And Einstein did something that we had never trained Einstein to do. And he took care of my dad.”

As a certified service animal, Einstein was allowed to live within the Junction City limits. But the day came when Einstein had to be medically retired as a service dog, which revoked his exemption from the pitbull ban.

“We almost lost Einstein,” she said. “I moved from this community to Lawrence, so I could have Einstein.”

While Fawcett moved from Junction City and closed her business in 2018, she said she hoped to continue championing animal-related causes in the community.

Fawcett believes this is a step forward for the city — and for pitbulls and their owners who can now come out of hiding. She and other Legalize Bully JC members have maintained throughout their fight that, even with the ban, there were still hundreds of pitbulls within city limits.

“I’m looking forward to a presentation every January that shows that there’s been no impact — because the dogs were here anyway,” Fawcett said. “So I think for me, it’s going to be nice to come back here every single January and see that nothing has changed.”