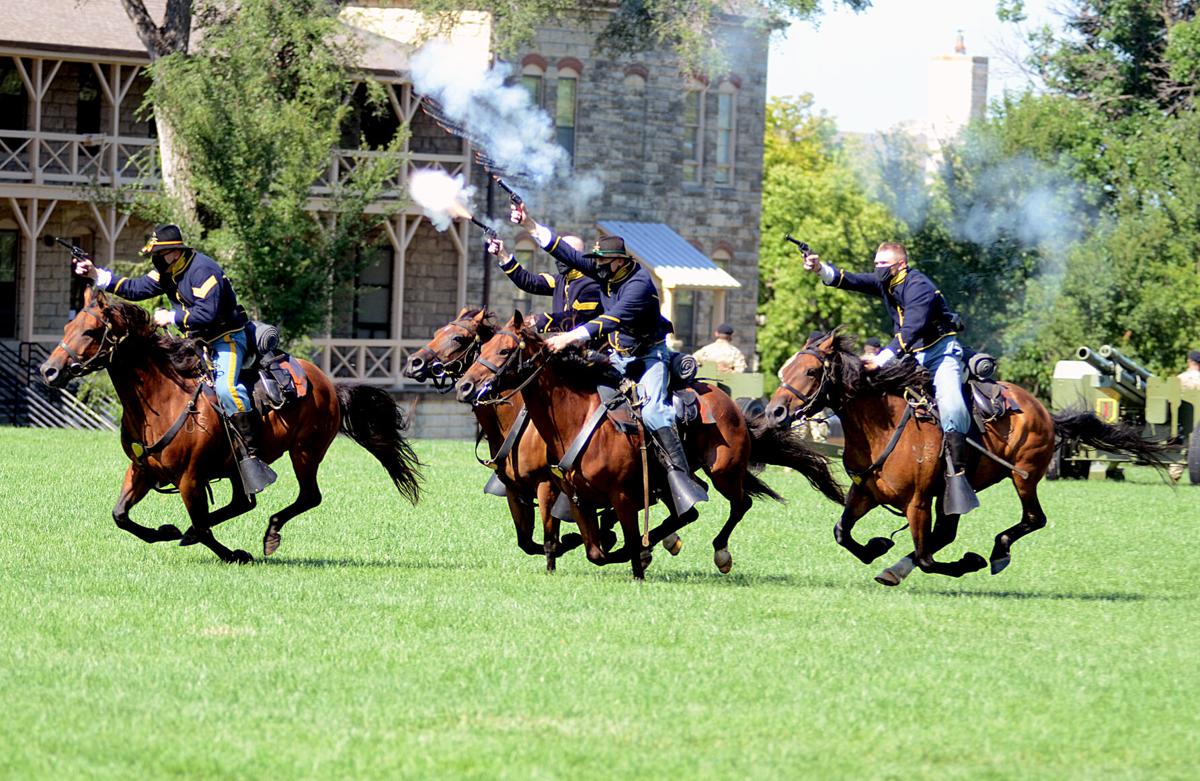 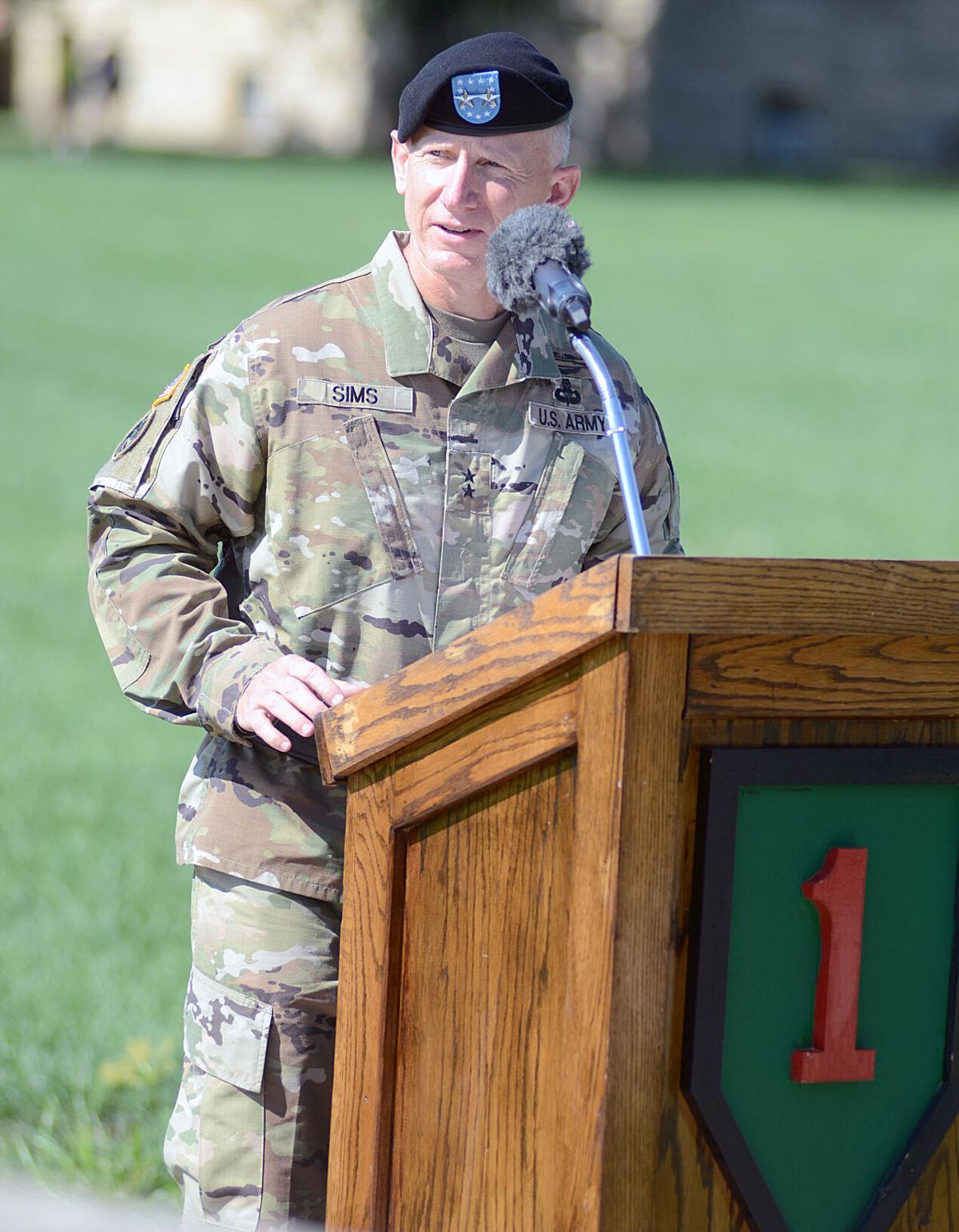 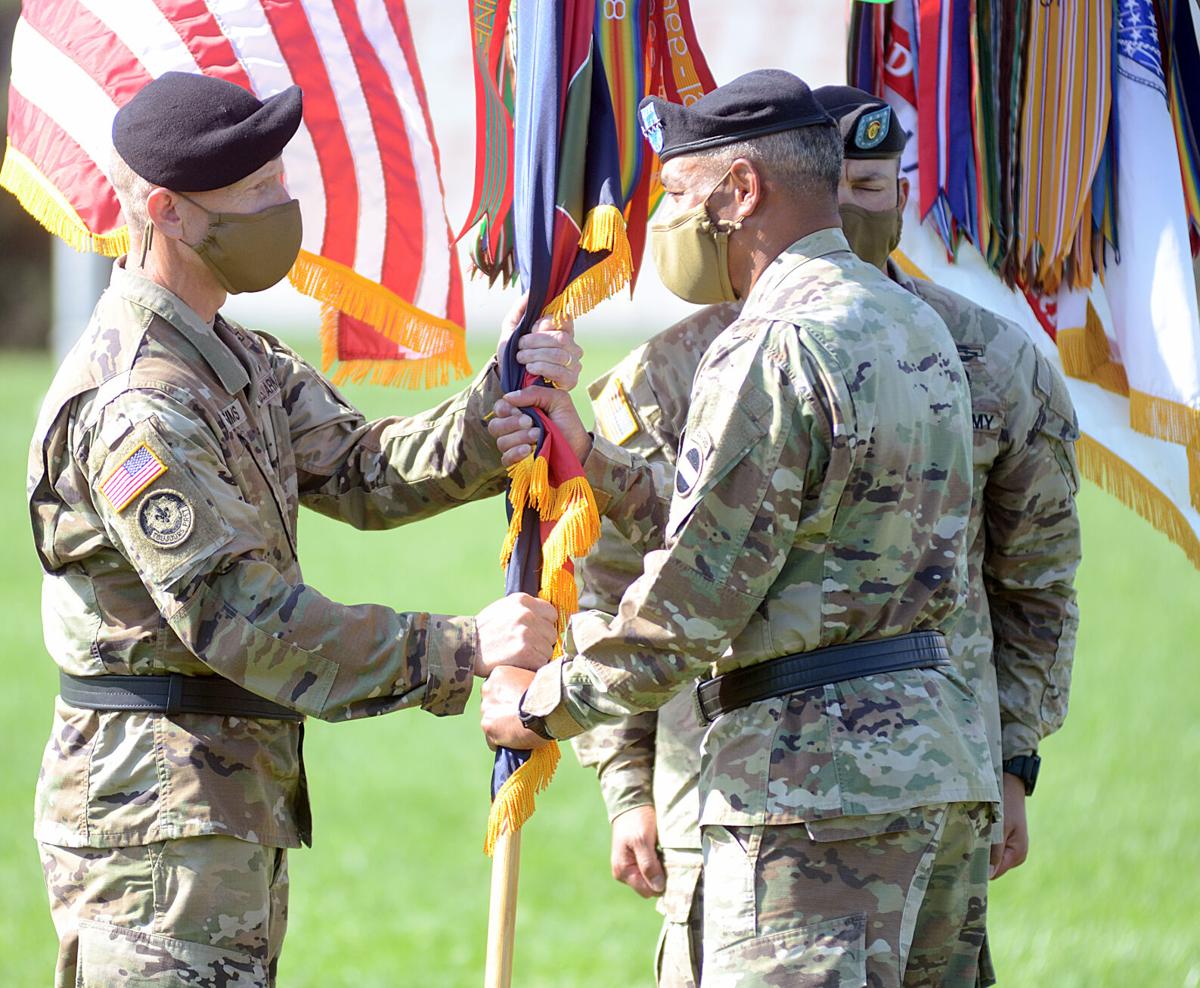 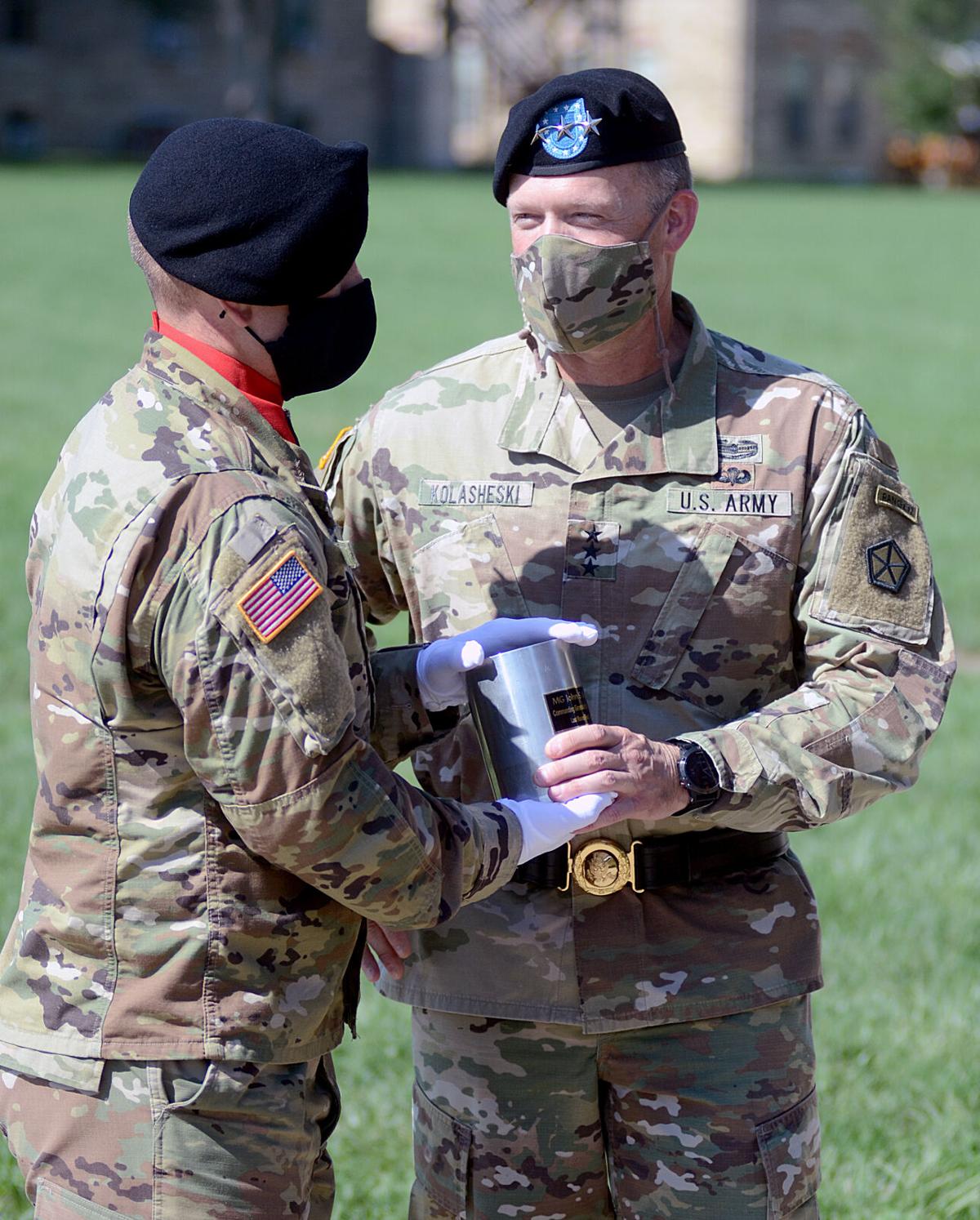 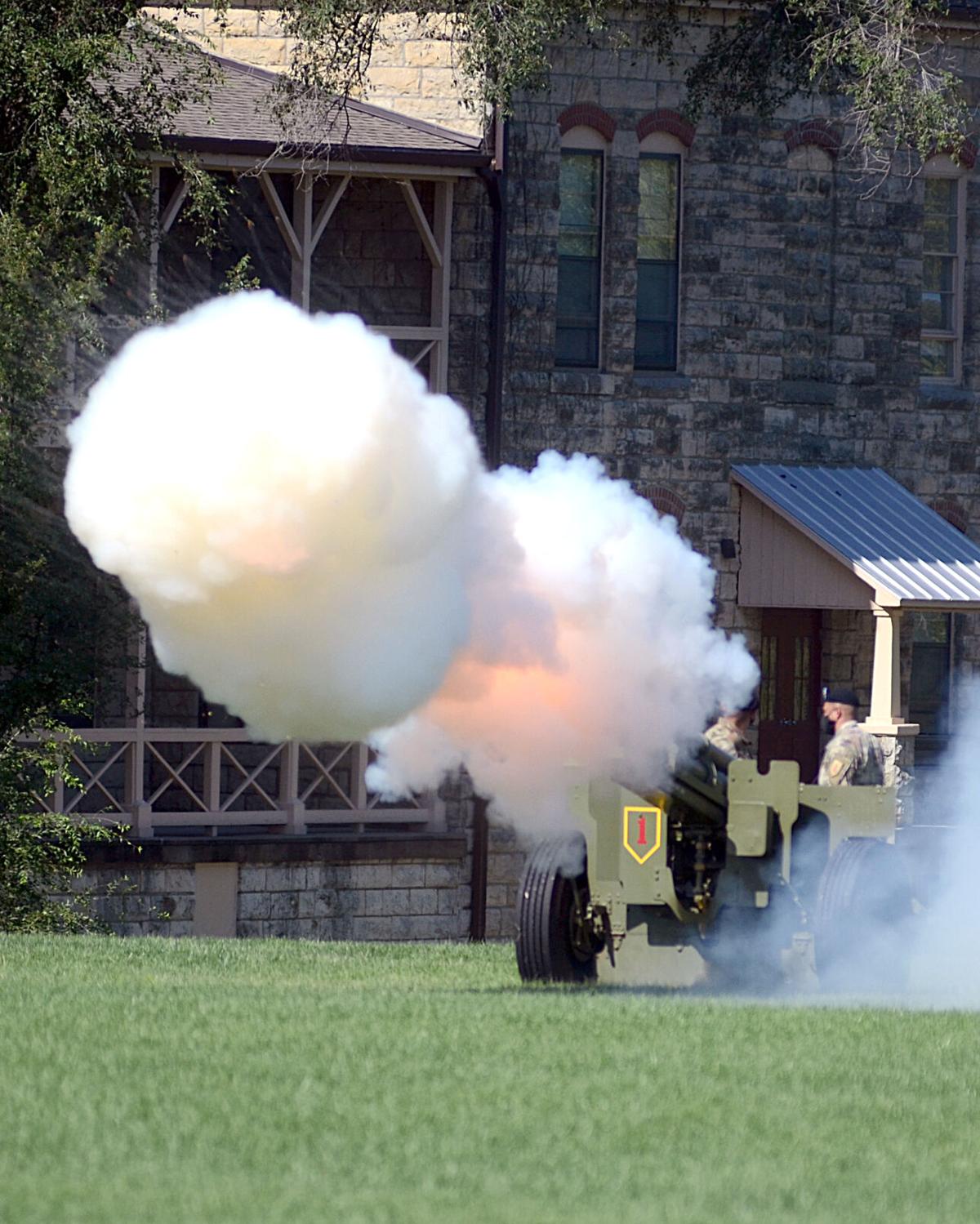 “DA Sims is a remarkable leader with extensive operational experience and I know that he is the right leader to lead this great division to new heights,” Garrett said. “DA and Fay, we offer you a new set of challenges here. And perhaps the most difficult set of challenges any commander can face, and that is taking a great unit and building on that greatness to make it even better. I have every confidence that you will succeed.”

The ceremony was different with the former commander, recently promoted Lt. Gen. John S. Kolasheski, already transitioned to his new assignment as the commander of the resurrected V Corps at Fort Knox, Kentucky. Kolasheski and his wife, Buffy, were present for the ceremony with the general giving remarks to the audience in attendance and virtually through the 1st Infantry Division Facebook livestream.

Sims joins Fort Riley and the 1st Inf. Div. after serving as the deputy director for regional operations and force management with the Joint Chiefs of Staff at the Pentagon.

Sims is no stranger to the heartland, he said.

“My mom and dad grew up in small farm towns, just northeast of Kansas City, on the other side of the Missouri River,” he said. “My parents have 13 brothers and sisters between them, and my brother and I were fortunate to return to that close-knit, extended family in Kansas City each summer. Those trips instilled in us the importance of family, the value of hard work and providing a consistent example of how to treat one another with love, empathy. and respect. Not to mention, reaffirm my affection for the Royals and the Chiefs.

“I wasn't kidding, we came back here every year,” he added. “I was in Kauffman Stadium for game one of the World Series the year we won. I was in Kauffman Stadium for the wild card game in 2014, when we won. I'm really excited to be back in the Midwest — there really is nothing like Midwest values. And to be here at this organization, and be this close to my family it's almost too good to be true.”

During his speech, Sims also resonated the importance of family.

“I commit to the soldiers, [noncommissioned officers], officers and civilians here at Fort Riley that my number one priority, as the commanding general, is you and your family,” he said. “We will be ready to deploy and fight our nation's wars when it's necessary. We will do this by ensuring every one of us has what is needed to contribute to the synergy of the organization. Duty first indeed, but people always — all else follows.”

Sims began his speech with special thank you to the officers who trusted him with this command and introduced himself to those in attendance with a traditional 1st Inf. Div., hello — with a twist.

“My name is DA Sims, and I'm proud to be a Big Red One soldier — Brave, Responsible and On point for the nation,” he said. “I have to tell you, I've been fired up to say that for some time now. Although I've never worn the 1st ID patch on my shoulder, I have served alongside the 1st Infantry Division for much of my career, including my last two deployments to Afghanistan.”

“When I heard Gen. Funk's opening remarks, with the comment that he, 'Was proud of being a Big Red One soldier,' I was immediately envious of the men and women who were around me with the 1st ID patch on the shoulder,” he said. To be here today, to be joining such an amazing team is an unbelievable honor.”

With his time at the Pentagon, Sims has been privileged to have been “exposed to things happening around the world,” that he said he might not have seen somewhere else. With that under his belt, he still credits the noncommissioned officers and the lessons he learned as lieutenant in the 82nd Airborne Division, he said.

Fort Riley and the Flint Hills Region has a different feel, Sims said.

“I've been here a couple times to visit in the past, but when you come on you can feel it at Fort Riley,” he said. “I went to Junction City yesterday to the military affairs, breakfast, and I mean I was told before I got here that the community would embrace me and the community was fantastic for Fort Riley and that the community, it wasn't like you know they were looking for something in return, that's the exact feeling I got at that breakfast yesterday. So, it's almost dreamlike to be here. I'm sure I'll get punched in the face at some point here in the first couple of days. But no, it's really something.”

The ceremony concluded with the playing of the “1st Infantry Division Song” and the “Army Song” before a reception was held welcoming the new commander.