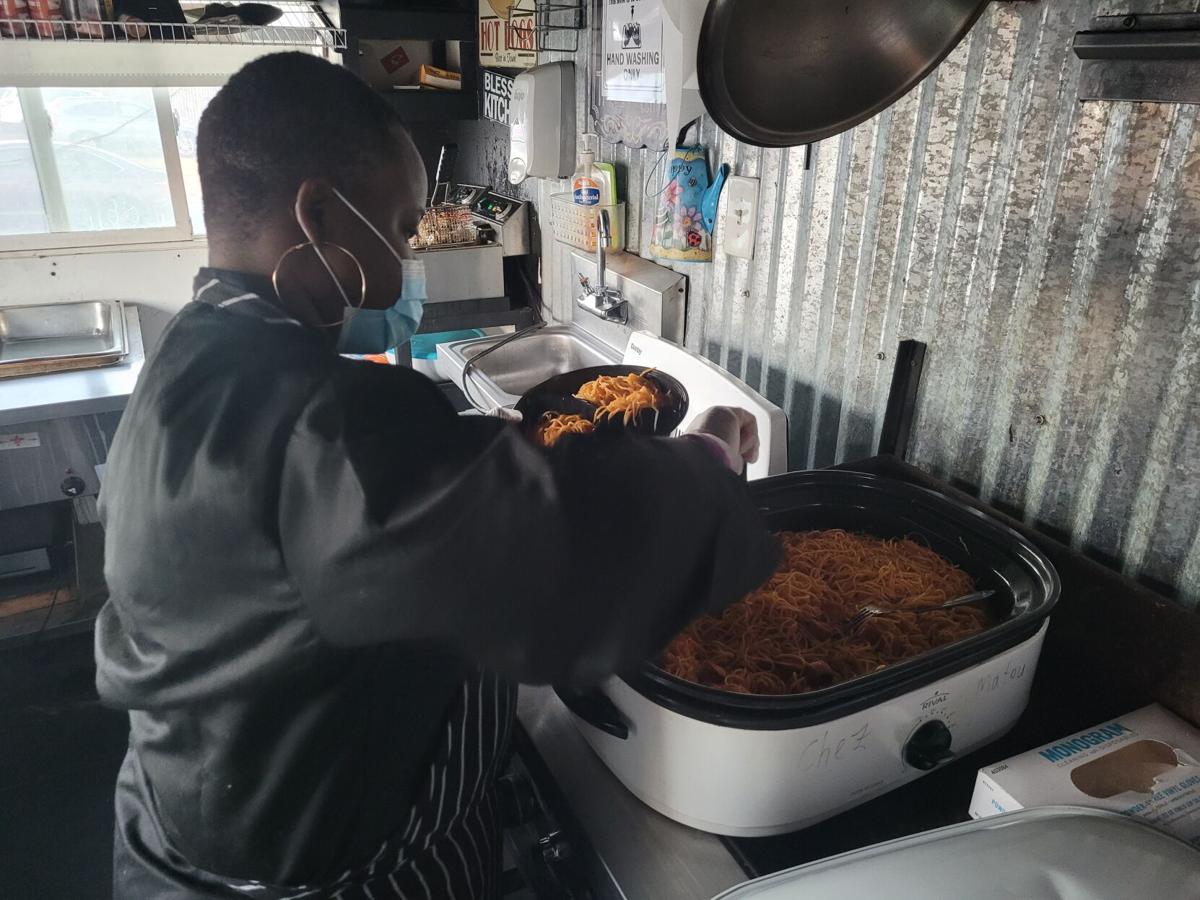 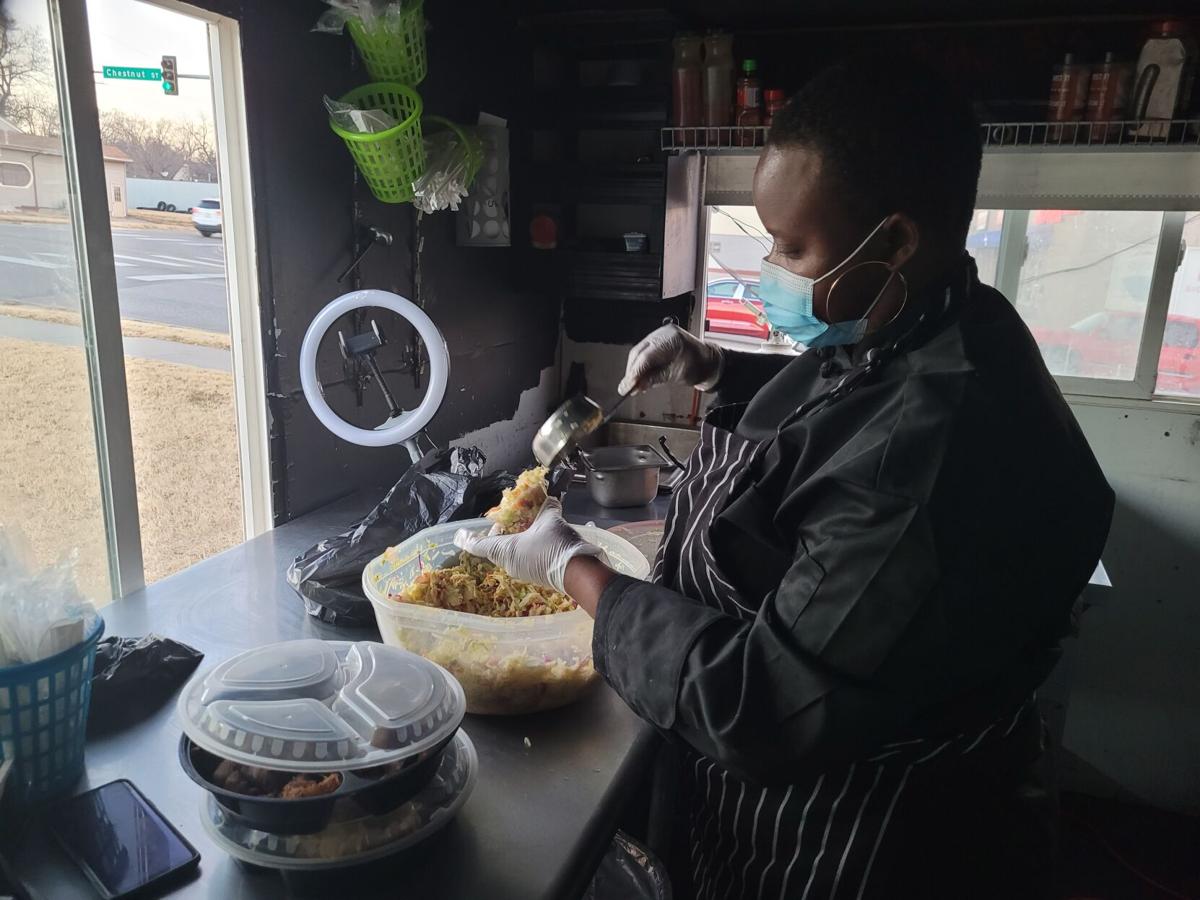 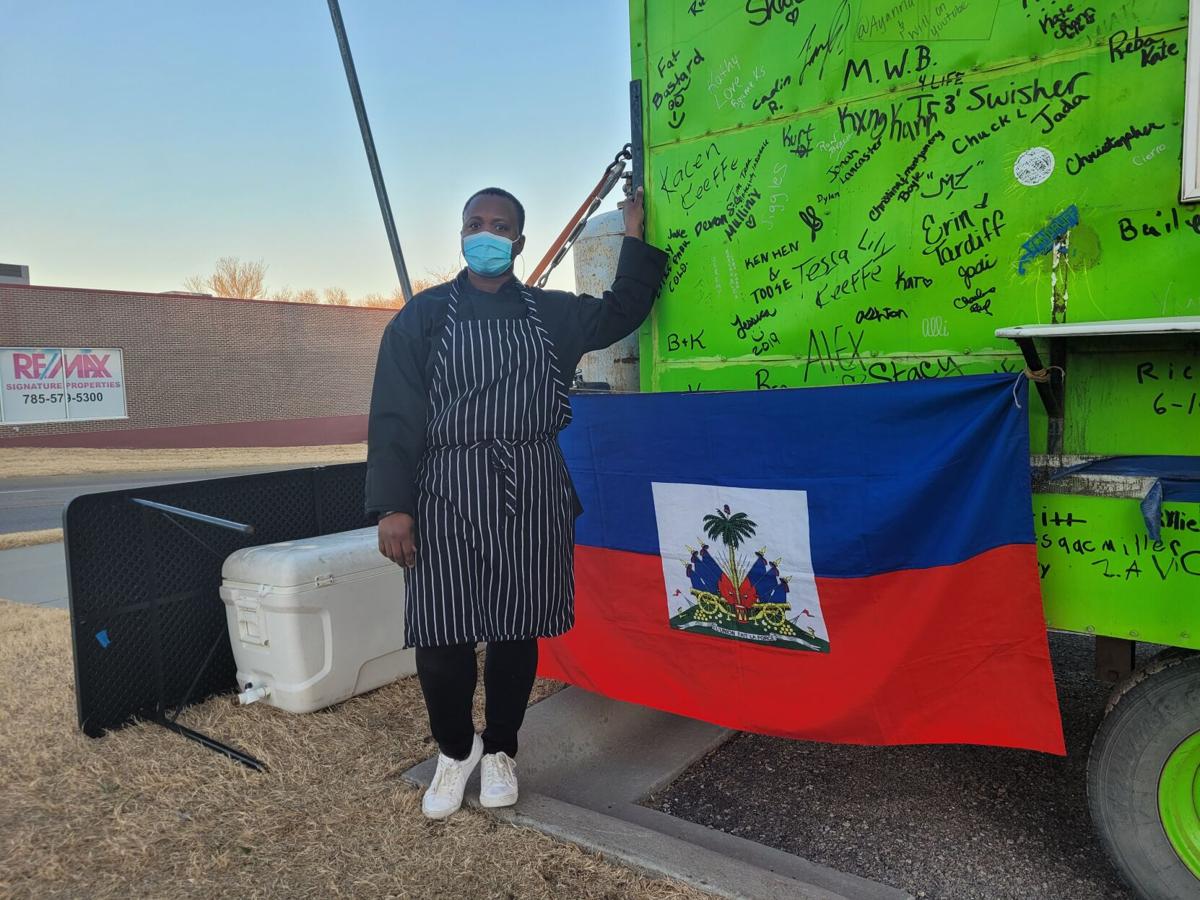 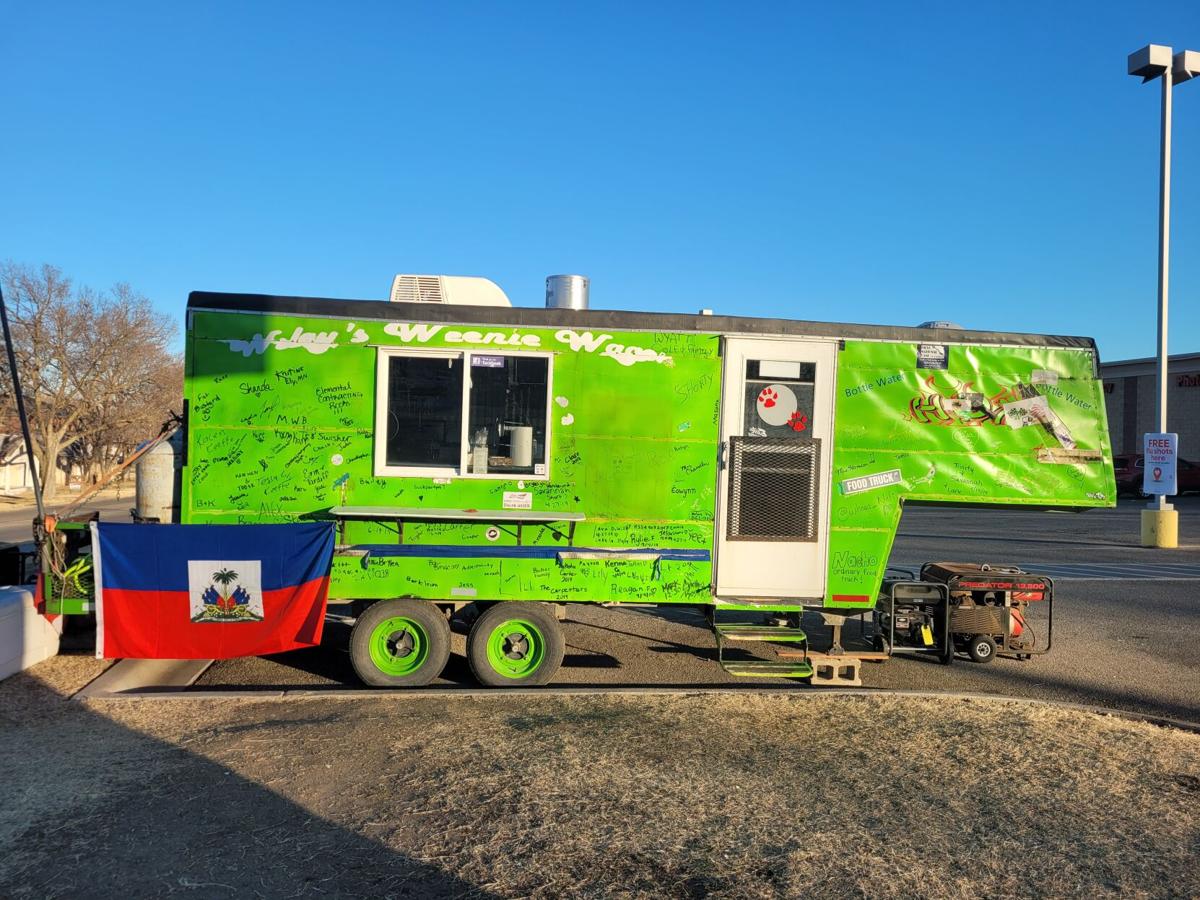 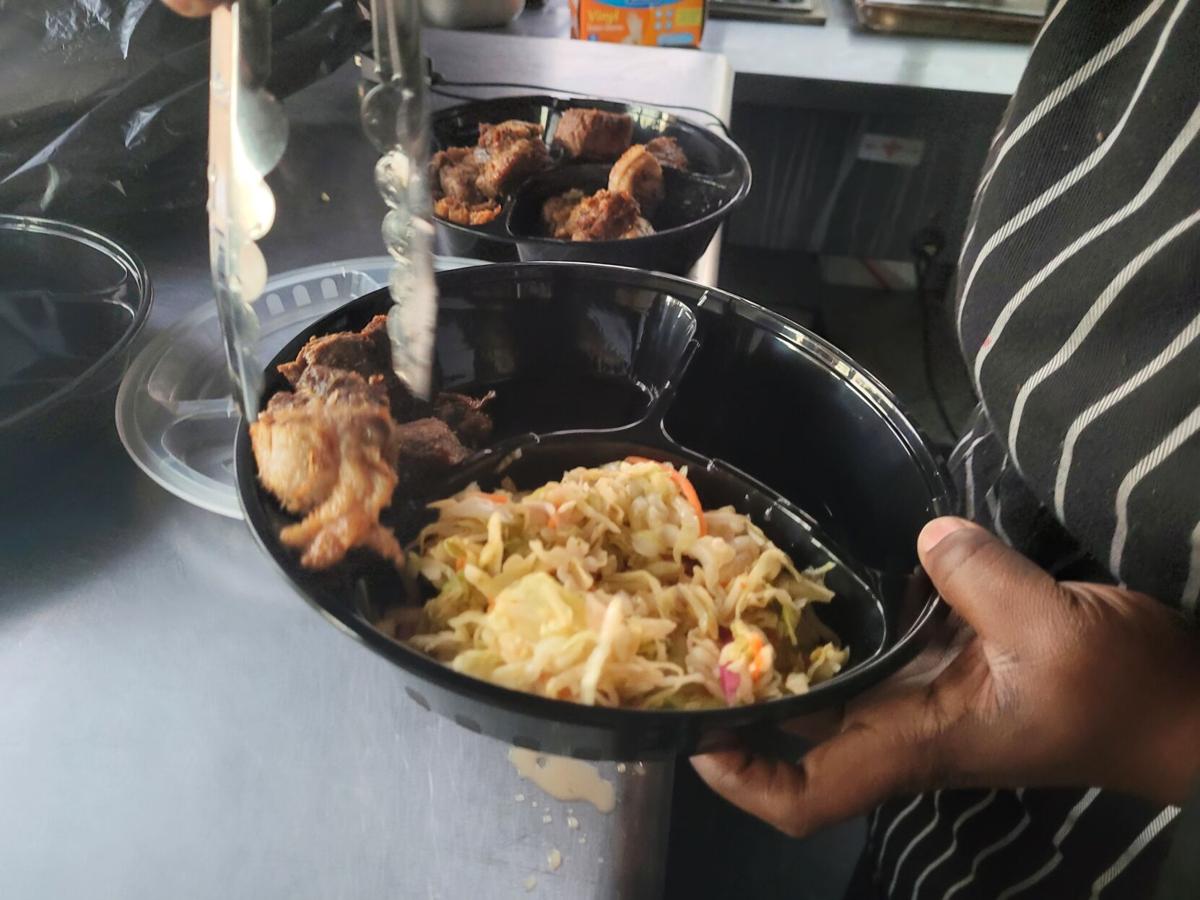 A bright green food truck has taken over a spot in the parking lot of CVS Pharmacy in Junction City.

The food truck belongs to Kalecia Simmons of the Chef and I, but it’s currently occupied by a guest chef — Martine “Matou" Chery-Hilaire.

Simmons said she has chosen to showcase other local chefs on her food truck because so many local business owners came forward to tell Simmons about their struggles after she opened up about her struggles owning a restaurant in Junction City.

“This is a good opportunity to use a resource I have and just give other people an opportunity as well,” she said.

Simmons sees the Chef and I as her brand and she hopes to expand that brand by inviting other chefs to take part in it. She plans to split time between Junction City and Manhattan with her food truck, but is not sure what the truck's exact schedule will be yet.

The goal is to build her business while helping others build theirs and at the same time offering aspiring restaurant owners the chance to see what it might be like to own their own restaurant.

“I will still be cooking, but right now I am really excited about the possibilities of my nonprofit for my daughter and being much more than a person that stirs a pot and boils water and cooks food,” Simmons said, referring to her daughter’s cancer charity Rally for Riley. “I want to be much more than that. I want to be able to help others grow and give back. I want to be a community pillar and what that looks like to me is, I’ve got to get out of the kitchen.”

Her stepping out of the kitchen means letting other people in.

Chery-Hilaire has been cooking in Junction City for years, but has never had a restaurant of her own — just a catering business, Simmons said.

“We have the visibility and we have the opportunity to promote people who want to have a restaurant and give them a taste of restaurant numbers,” Simmons said. “When you start to talk about 60 to 100, 150 people coming to eat inside your establishment, you’re no longer a caterer, you’re a restaurant."

Chery-Hilaire is the Haitian-born owner of Junction City catering business Chez Matou and until Friday, she is bringing authentic Haitian cuisine to the community via the Chef and I.

When Chery-Hilaire came to America at the age of about 21, she was uncertain if she wanted to leave her homeland. She had a job teaching kindergarten and she was enrolled in law school, but her mother was a United States citizen and Chery-Hilaire wanted to come live with her.

So she made the big move, but when she arrived in the United States in 2003 — and later to Junction City in 2009 — she missed the food she had grown up with.

She had learned to cook when she was young — at about the age of 13 or 14 — so she was able to recreate some of her favorite childhood dishes. She wanted to share these foods with others.

Chery-Hilaire has been trying to introduce Americans to Haitian dishes ever since.

“For me, Haitian cuisine is part of me,” she said. “That’s what makes me feel like I’m still home even though I’m in a different country and a different culture. So I still want to keep my heritage and the best way for me to do it is to do it with something I’m passionate about — like cooking.”

The food of her homeland is part of her identity and her children have grown up eating the dishes she learned to make when she was a child herself.

“That’s why I’m so passionate about wanting as many people as I can possibly have to try Haitian food,” Chery-Hilaire said. “I feel like it’s a hidden gem not many people know about.”

She has many passionate food memories from back home, of eating her favorite food, diri ak lalo — a mixture of rice, beans and spinach that was popular in the communities where she grew up.

“When I came to the United States, I missed home so much,” she said. “All of the sudden, it was like I up and left and came here to really start my life over. I didn;t have any friends. I had family, but most of my sisters didn’t even speak Creole like I do. So it took a minute to feel like I was at home … Pretty much the only thing that kept me feeling like I was still home was the food.”

Cooking Haitian cuisine is and always has been a stress reliever for Chery-Hilaire.

This week, she has offered a dinner menu full of traditional Haitian cuisine, including fritay — fried meat such as pork, chicken and hot dogs — served with fried plantains and a side of spicy coleslaw.

“I always accompany that with something else to showcase all of the Haitian dishes, but ultimately if I want to keep the authenticity, I have to have some kind of fritay as I serve in trying to present Haitian cuisine to the community,” she said. “Because if you go to the streets of Haiti, you’re going to find fritay everywhere. To me, that’s what keeps the authenticity of what I’m doing. So if you walked through the streets of Port Au Prince right now, you would find what I’m serving as far as the fritay goes.”

Wednesday evening, Chery-Hilaire served espageti ak hot dog, a mixture of spaghetti and hot dogs that is popular in Haiti.

Matou hopes her cooking can help Haitian people in the community remember their roots and remind them of their culture, something she expressed in Haitian Creole.

“Mwen renmen ba nou manje lakoy pou fé nou sonje Ayiti,” which translates to “I love to feed you food from back home to make you miss Haiti.”

Tonight and Friday, Chery-Hilaire will serve dinner out of the food truck from 5 to about 7:30 p.m. before returning to her regular catering business.