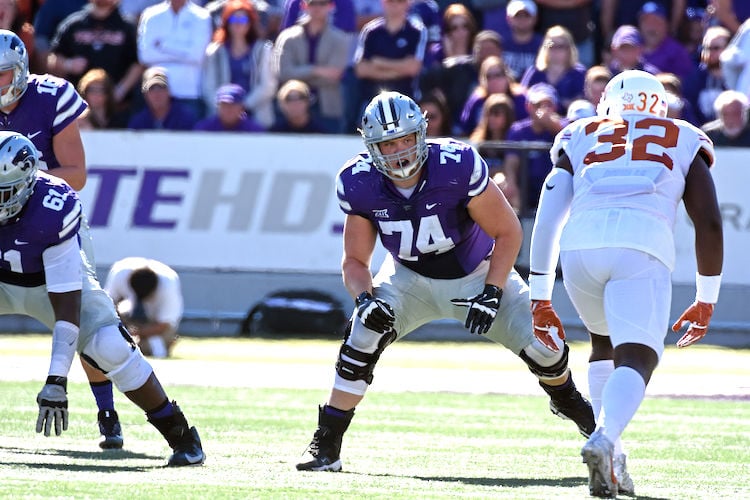 K-State sophomore offensive tackle Scott Frantz prepares for a snap against Texas on Oct. 22, 2016 at Bill Snyder Family Stadium in Manhattan. The Wildcats defeated the Longhorns by a final score of 24-21. 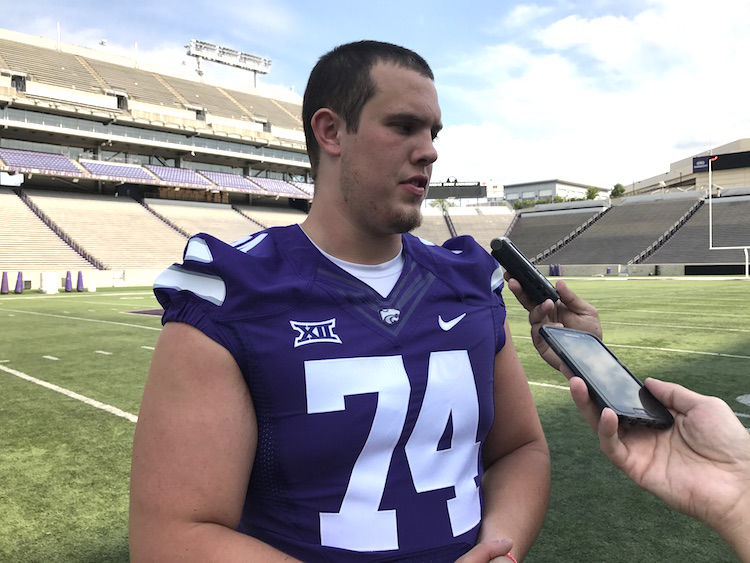 K-State sophomore offensive tackle Scott Frantz prepares for a snap against Texas on Oct. 22, 2016 at Bill Snyder Family Stadium in Manhattan. The Wildcats defeated the Longhorns by a final score of 24-21.

MANHATTAN — On the morning of July 12, K-State sophomore offensive lineman Scott Frantz appeared on ESPN in an interview with ESPN reporter Holly Rowe. In that interview, Frantz revealed that he was a gay man. Frantz, who spoke to the media last Thursday as part of K-State Media Day, talked about some of the feedback that he’s received since that interview.
“The reaction has been nothing but positive. From the Manhattan community to the Lawrence community, it’s been nothing but positive and kind words. There’s been nothing but love and acceptance. Everyone who’s reached out to me specifically, has all been positive. I’ve never had someone say anything derogatory to me so far. It’s been a great few weeks,” Frantz said.
K-State head coach Bill Snyder talked about some of the feedback that he has heard since the interview.
“I just know within our program, I don’t know about outside of that. All responses, inside or outside, that I’ve had have been very positive about the way he handled himself, and about the way the players handled it. We had long conversations with Holly (Rowe) before we did that. I didn’t want it to be a spectacle. There’s a reason behind him doing that, and I thought that they handled it well. Our players knew a year before that, but it’s as though nothing changed. They’ve handled it absolutely fine. We’ve had a lot of dialogue (about potential negative reactions). That was before we did that. I know that there has been some negativity, but most of those people don’t have an address on their Twitter. They say anything that they want. He knows that he cherishes the thoughts of the people important to him,” Snyder said.
Frantz talked about dealing with the potential negative reactions to his decision.
“Since day one, I’ve talked to my coaches about doing this. They were on board. They said that they get why I’m doing this. They want to help. Coach Snyder made it clear that he wants to help me help other people. That was important to him. A big concern of theirs was not doing it, but the after-effect. There’s a saying that you have to be ready for people trash-talking on the field, you’ve got to be ready for fans heckling you at away games. Social media is a big thing these days. I’m trying not to pay attention to the negative comments. I don’t really get on social media much anymore. It’s been nothing but positivity,” Frantz said.
Frantz noted that he isn’t worried about potential negative reactions from opposing fans on the road.
“People trash-talk regardless. This year might be a little more personal to me, but people were trash-talking last year and they’ll trash-talk this year. Fans heckled me last year, and they’ll heckle me this year. I remember against West Virginia (last year), I got booed off because I got injured and I had to walk off. I started jogging off, and the whole crowd started booing me. Being heckled and being trash-talked is nothing new to me. It’ll be different this year, no doubt, but that stuff doesn’t really bother me,” Frantz said.
Frantz talked about how he wanted to time his ESPN interview.
“Timing was a big factor. There’s obviously a lot of interaction between myself and ESPN. We talked about maybe doing it during the season. It was clear to myself and the coaches that we didn’t want to do that. We didn’t want a distraction in the middle of the season. Getting it done before the season was really big for myself and coaches and teammates. Everything else just kind of worked out. I wanted to reach out to people and help people. Coach Snyder wanted to do that same thing. That’s what we ultimately did,” Frantz said.
On the field, Frantz, as well as K-State’s offensive line, had a very strong season. Frantz, who started every game at left tackle, helped the K-State offense rush for 3,013 yards and 39 touchdowns. As a unit, the offensive line allowed only 25 sacks.
One of Frantz’s signature games of the season came in the Texas Bowl against Texas A&M. In that game, Frantz was matched up against defensive end Myles Garrett, who was drafted with the No. 1 overall pick in the 2017 NFL Draft by the Cleveland Browns. Heading into the Texas Bowl, Garrett had collected 8.5 sacks and 15 tackles for loss. Garrett was also coming off of a 2015 season where he totaled 11.5 sacks and 19.5 tackles for loss. In the Texas Bowl, Frantz held Garrett to no sacks and only one tackle.
Frantz talked about the matchup with Garrett.
“The bowl game was so fun on so many different levels. I’ve never ended a season on a win before. To end a season on a win gave a different kind of momentum going into this year. In particular, me going up against an eventual No. 1 draft pick, having a good game was big for me. That gives me confidence going into this year. It just worked out on every level,” Frantz said.