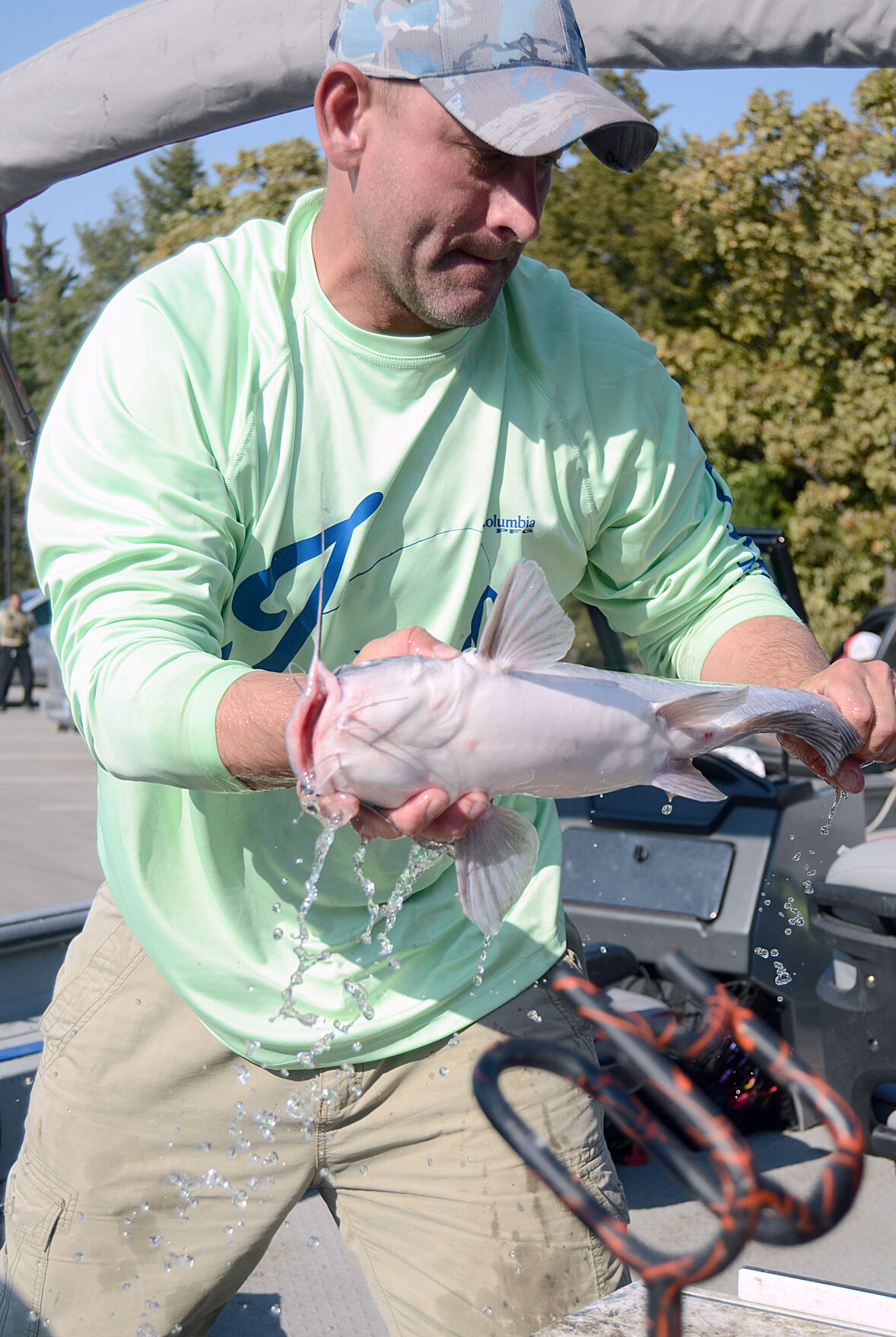 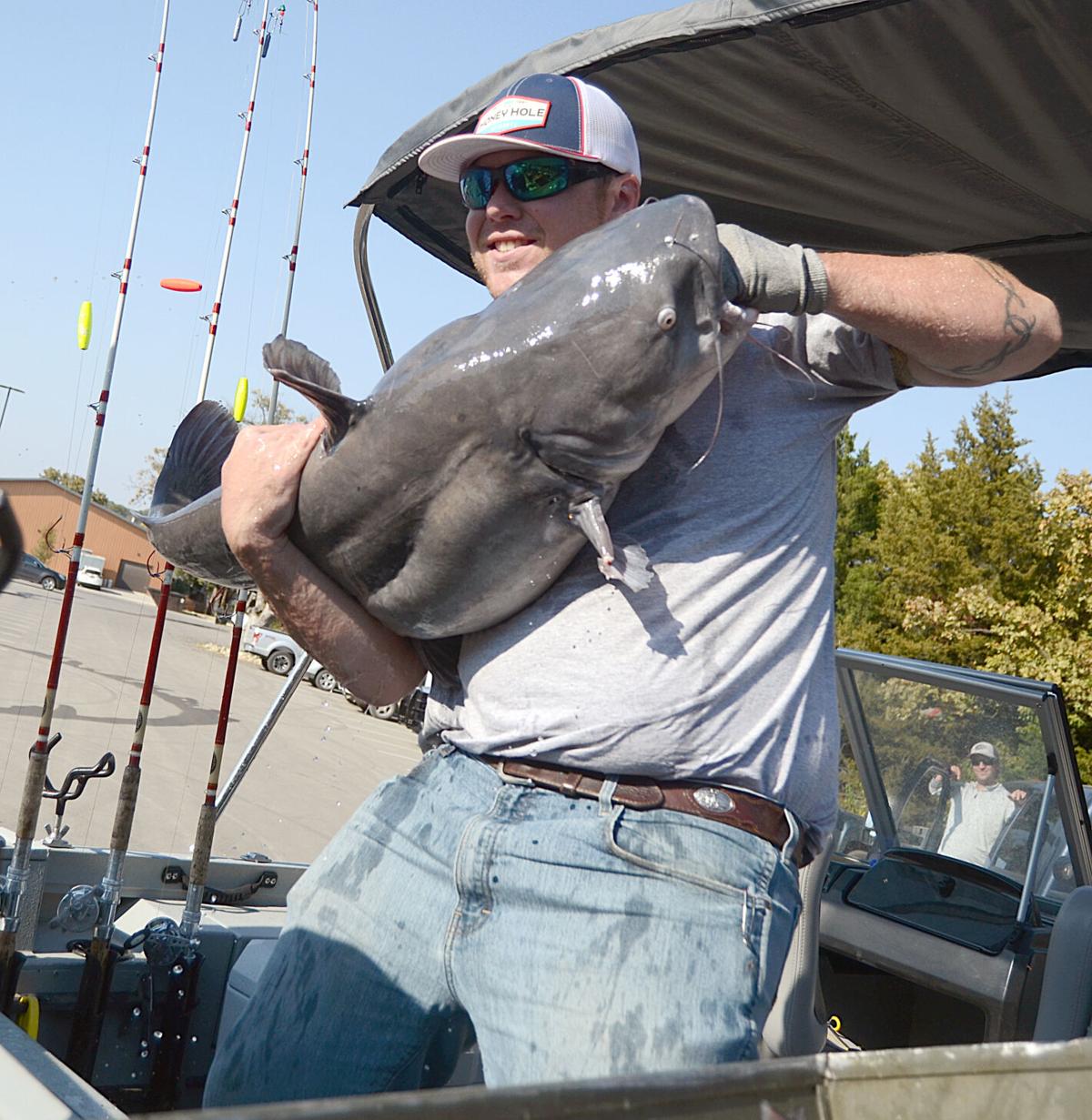 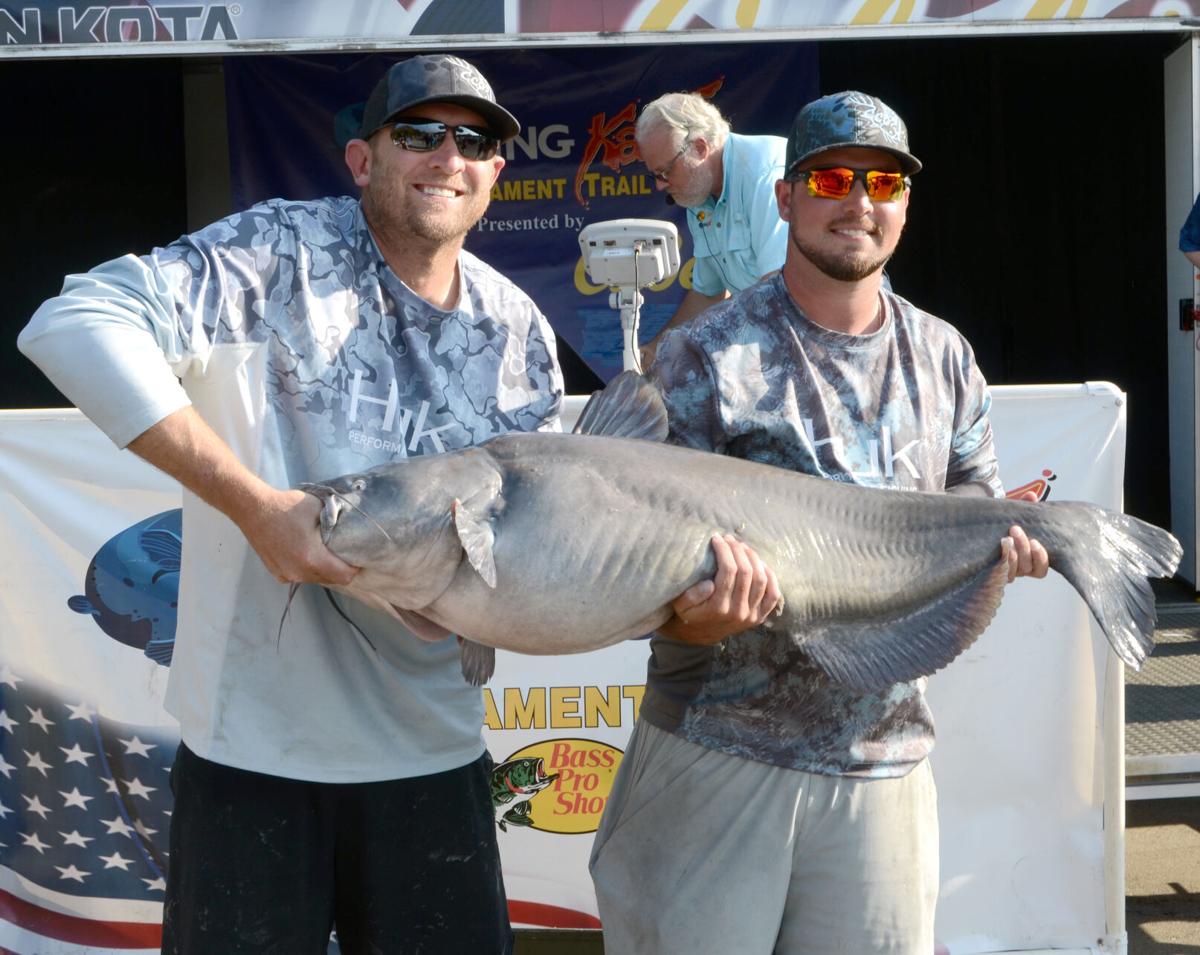 The top catfish anglers in the nation descended on Milford Lake Saturday for a chance to earn a spot in the Bass Pro Shops/Cabela’s King Kat Classic Tournament Oct. 29-31 at Milford Lake and to earn valuable points for the season-long championship.

“We moved the tournament to where they could be in the water and launch at 5:30 a.m., but they couldn’t start fishing until 7 a.m.,” he said.

The anglers were searching for the biggest channel cat, flathead and blue catfish they could find. As long as they met the minimum requirements for each species.

For channel and flathead catfish, the fish had to be at least 15 inches long.

“King Kat USA has set out a rule that we want 15 inches,” Fortner said. “I believe state law is 12, but we’d like to give the fish a fighting chance. So, we chose 15 inches as a minimum length that they could bring in.”

For blues, there was a slot limit in place. The fish had to be no larger than 25 inches on the smaller fish and no smaller than 40 inches for the larger of the species.

This was the harder on the competitors to mitigate through as several anglers, as they unloaded, talked about 38-39 inch catches that they had to set back.

Each boat was authorized two “overs” — 40 inches or greater — and a max catch of five fish, regardless of the species.

After all the weights were inputted into the computer it was clear that the team of Kaleb Palmer, Meriden, Kansas, and Caleb Burgett, Topeka, were the top anglers on the day with a combined fish weight of 101.86 pounds, including the second largest fish of the day that weighed in at 45.98 pounds.

“It’s fun, definitely a fun day,” Palmer said. “Can’t wait to come back and do it again in a couple of weeks.”

The two took the lead early in the weigh-ins and the unknowns of who caught what made the team a little nervous, Burgett admitted.

“I mean it’s … all you can bring in is two fish,” he said. “So, the two big ones count. Then, you get the possibility of people bringing in big channel cat too.”

There was one fish bigger than Palmer and Burgett’s fish. It was hauled in by Benji Stoller and Derek Bruna, both from the Manhattan area.

Their monster topped the scales at 54.96 pounds.

“It's always cool to do it on tournament day,” Stoller said. “You catch a lot of the mid 40 fish out here but to actually put one over 50 on the day it mattered. It was pretty cool.”

With the slot limit in place, Stoller said the competition for the big fish was going to be interesting.

“We know that it definitely makes it anybody's game,” he said. “But, you still have to have your tactics and find fish.”

Several teams represented the Flint Hills Region including one team comprised of soldiers assigned to the 1st Infantry Division.

“Seeing how I just started doing this, it actually is great for an opportunity to get to fish in the nationals,” Hunt said. “You know, it was nothing that I thought that I would be doing — but here I am.”

The duo finished with a weight of 20.48 pounds. They were happy that they at least were able to hook the max number of fish allowed, regardless of the overall weight.

“I was happy that we got five,” Hunt said. “But, seeing how we fish here often and we've pulled out some pretty good fish … it's just learning the pattern this time of year. It's a little difficult, but I'm happy with the five we got.”

For their first time fishing in a catfish competition of this size, the two said they hoped to return next year when the qualifying event returns.

The main focus of the tournament is to promote the sport of catfish fishing. With that, the event brings economic impact as the teams spend several days in an area — lodging, fuel, eating, last-minute supply shopping — as they get to know the lake they are fishing. This turns into a rise in tourism to the community they are at as well as a boost to the number of visitors to the lake.

Michele Stimatze, Geary County Convention and Visitors Bureau executive director, was pleased with the overall turnout of the event.

“It would have been nice to have a few more boats,” she said. “We were hoping for 50 to 60 boats. But all in all, these guys were very dedicated and I think because of COVID I think that sort of put a damper on our numbers.”

With Milford Lake boasting the title of “Fishing Capital of Kansas” due to the size and number of species offered, events like the qualifier and the Classic help promote the lake to out-of-state and in-state visitors alike.

“People just love to come down here and fish,” Stimatze said. “And, they know that there are some big cats in the water. So economic impact wise, it's a great opportunity for Milford Lake to host these events. We've got them coming back next spring. One for Cabela's Catfish and then for Cabela's Crappie. So, there's a lot of excitement. We will host the tournament at the end of the month and that'll be big to Geary County.”

Because of COVID-19 the tournament was postponed until Saturday after being scheduled to take place in March. The movement within the schedule forced anglers and tournament officials to change plans accordingly. With the Classic slated to take place in two weeks, having the chance to visit the lake is a positive and negative thing this close to the finale, Fortner said.

“Fortunately, we've been able to just move it to this later time,” he said. “You know, there's a good part about it and a bad part. The bad part is, it's three weeks away from the tournament here at Milford. So you've got teams from Pennsylvania, Georgia — we have nine states represented here at the tournament today. So, they're having to travel quite a distance to come in. And then they'll turn around, they'll be back for the classic here in a few weeks.

“But then the bright side of it, is they can consider this a pre-fish,” he added. “They'll get out and they'll see exactly where they'll be, what's their hotspot and they'll remember that. Also, the good side of it, it's a back-to-back win for the tourism and the citizens of Milford and Geary County. It's a win all the way around.”

Fishing tournaments like the qualifier and Classic have other benefits for the anglers who fish at Milford Lake. According to Brett Miller, District Fisheries biologist, Kansas Department of Wildlife, Parks, and Tourism, tournaments allow him and others to see how the fish are adapting to the environment, how they migrating throughout the lake and see how the hatchery is doing overall to support the needs of the anglers.

“People catching good fish like this means, and kind of reassures us, that we're kind of doing what we're supposed to do and kind of trying to create the best fishery we can for anglers — not just in Kansas, but from out of state as well,” he said. “We’re always more than welcome to get people here from all over the place and experience this fishery. We always try to get that exposure and the more people we can get here the better to experience what Milford has to offer. Hopefully, when these anglers come back here a couple of weeks, we'll hopefully have a really good turnout with all the people that make the trip.”

With the size differences being turned in for weigh-in, Miller said it gives him the opportunity to see what all is out there lurking in the water of Milford Lake.