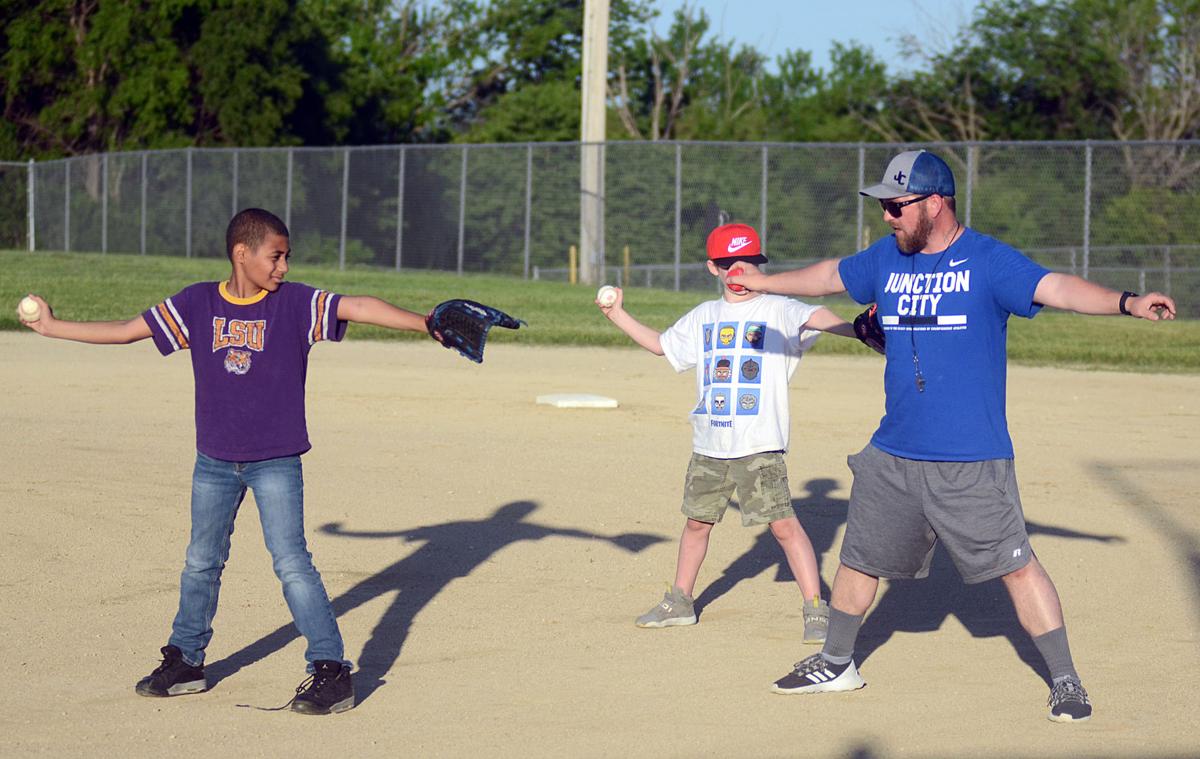 Mike Stewart, Mustangs coach, works with first time pitchers Jackie Oliver Jr., left, and Aiden Madison during practice Friday in North Park. The Mustangs, a 10U team, held their first practice of the season as they prepare for their first game June 10. 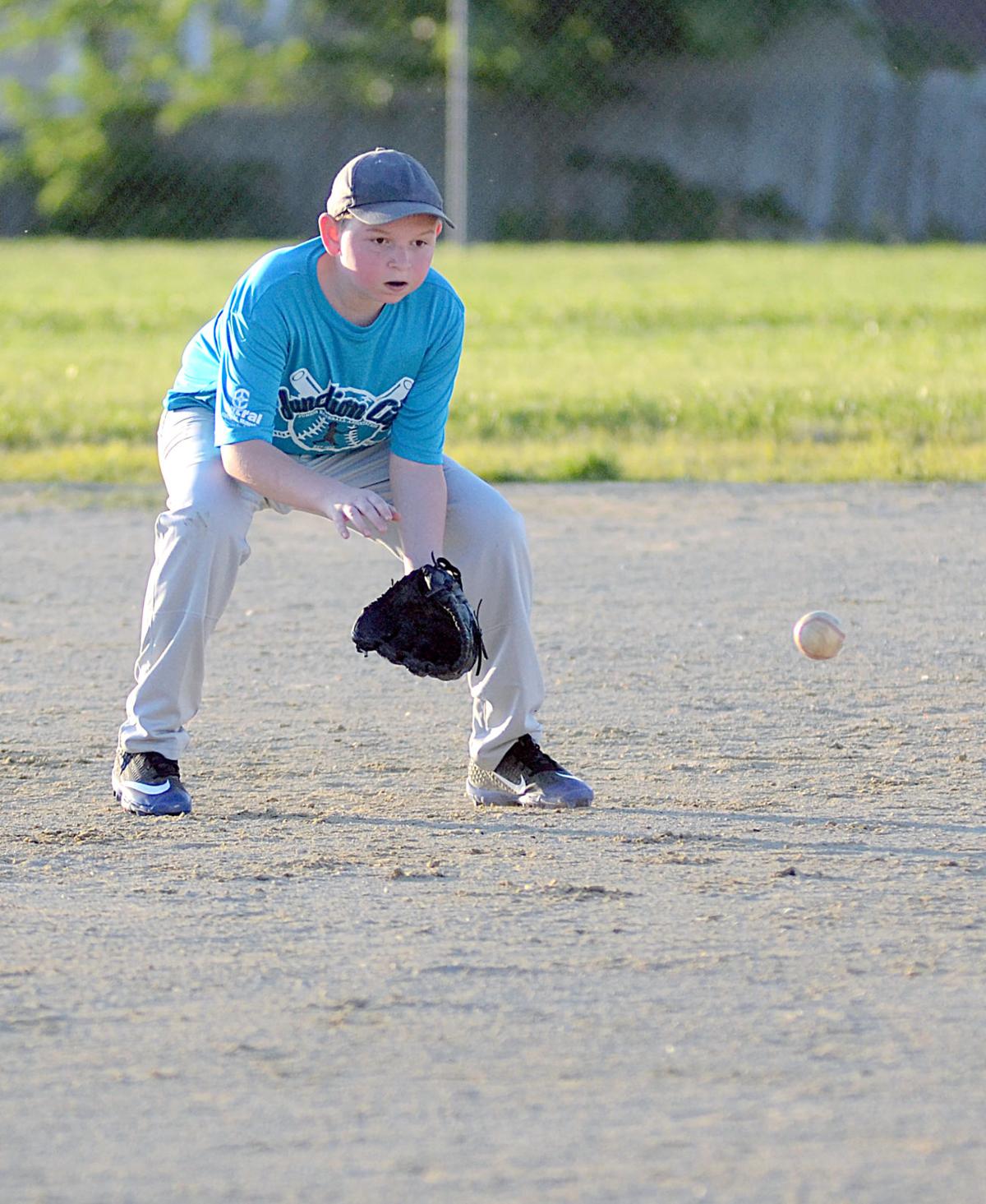 Johnny Harsh watches as a grounder comes to him Friday during practice with his 11-13 year old team at North Park. Summer baseball season in under way in Junction City as teams practice social distancing as much as possible under Geary County Health Department guidelines and recommendations.

Mike Stewart, Mustangs coach, works with first time pitchers Jackie Oliver Jr., left, and Aiden Madison during practice Friday in North Park. The Mustangs, a 10U team, held their first practice of the season as they prepare for their first game June 10.

Johnny Harsh watches as a grounder comes to him Friday during practice with his 11-13 year old team at North Park. Summer baseball season in under way in Junction City as teams practice social distancing as much as possible under Geary County Health Department guidelines and recommendations.

Sounds of baseball bats pinging echoed in North Park this week as baseball teams from Junction City got their season underway with their first practices of the shortened season.

“(It) feels really great,” said coach Brad Oentrich, 12U Junior Jays coach Thursday. “(It's) good to get out, finally, after a big layoff and get the kids mashing on the dirt and the grass and play real baseball.”

Teams are doing their best to keep players distant while working on different techniques including extending the dugout down the right field line according to coach Denver Kell, 13U head coach on Friday.

“We're out here taking some precautions, but we've got the kids doing some social distancing in our new prefab dugout … making sure we're getting at least eight feet here,” he said.

As area communities cancelled their summer season due to the uncertainty due to the COVID-19 pandemic, coaches praised the Junction City Junior Baseball Association for working with the Geary County Health Department and taking feedback from community members to ensure a season still happened for the youth of the community.

“It's absolutely tremendous there's community support,” Oentrich said. “The hard work by the board and the president that they've done to get us back, and we've had a lot of positive feedback from the community and the parents that they want to see it happen. Everyone wants to be safe, but everybody just really wants to see baseball.

“JCJBA, especially board president Kenny Upham, have worked really hard with the Geary County Health Department and putting guidelines in place for players, coaches and fans,” he added. “So, we feel like we adhere to those and we're gonna be safe.”

After more than a three month layoff from any sports, both Oentrich and Kell said the players have a renewed energy while at practice. Usually, some of these athletes would have come into summer league play after participating in baseball or track at school taking a short week or two break before starting again.

“There's been some kids that’ve been dedicated,” Kell said. “You can tell they didn't take any days off it doesn't look like, but I think overall we'll come around — the weaker links will come stronger here in a few weeks. Our first game is a scrimmage on June 4 and then our games, I think, start June 8.”

“These kids are 12 years old, they’re sixth and seventh graders,” Oentrich said. “They've been playing baseball ever since they were six years old probably. So, they picked it up really fast after the layoff — still rusty, still want to get a little better baseball shape but otherwise pretty good.”

While the two age groups are different in some respects — baseball IQ, skill sets, etc. — both coaches agreed fundamentals are an essential part of their early practices to get the players minds back into being on the diamond.

“It pretty much saves games,” Oentrich said. “If you can eliminate runs by the other team, you're always gonna be there at the end.”

“We can we can never lose our fundamentals,” Kell said. “Obviously at this level, we're going a little bit deeper with some situations, mentally, and so on. But, they got to stay strong with their fundamentals. Every single day we got to be working on our glove work in our, in our stance and teamwork and just keeping things simple.”

Kell said the game is not just about the final score on the board, it’s about the lessons learned on and off the field that he stresses to his players.

“If we do what we're supposed to do out here, teach them to be well rounded young men, then the wins will show up on the scoreboard,” he said. “Ultimately, if we can just go out here and compete hard, and do it as a team, I think that'd be the biggest victory.”

Final game schedules are still in flux as league officials and coaches work on getting the most out of their time with their teams. There will be several tournaments held in North Park as well as at historic Rathert Stadium this summer.