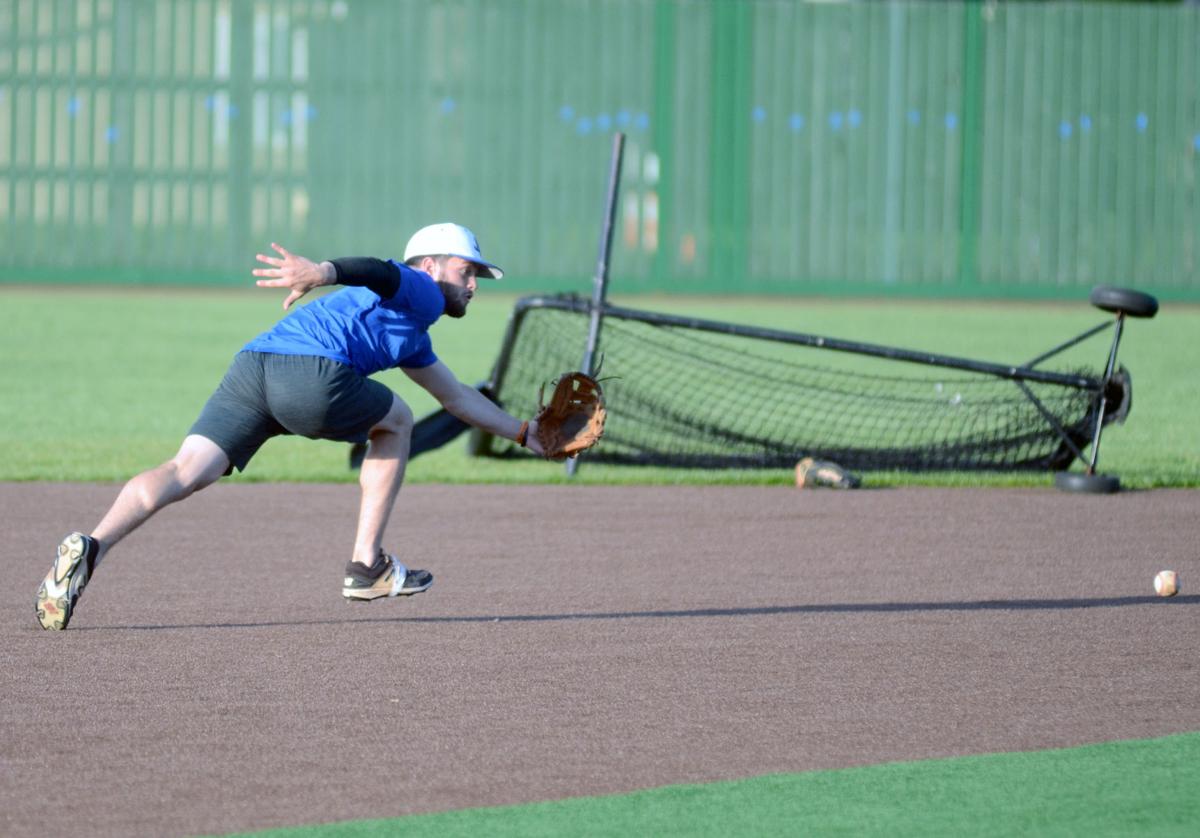 Shortstop Russell Wilkey sprints toward a ball during infield practice Sunday at Rathert Stadium. The Junction City American Legion baseball team has been practicing, sometimes twice daily, for the last week to prepare for their season opener this week. 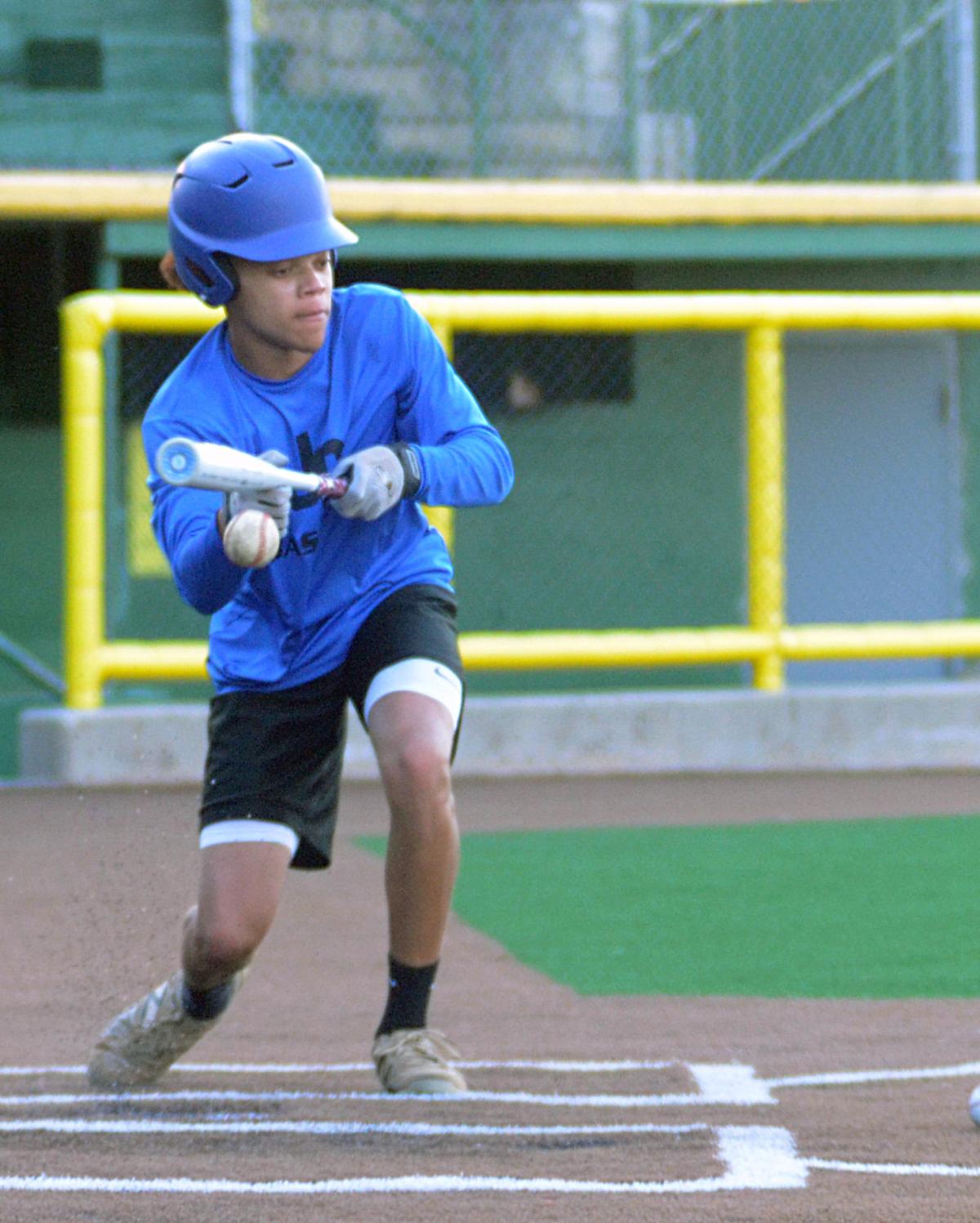 Catcher Keyahn Taylor bunts the ball during batting practice Sunday at Rathert Stadium. Taylor and the Junction City American Legion baseball team prepare for their season opener this week with a scrimmage Tuesday against Chapman.

Shortstop Russell Wilkey sprints toward a ball during infield practice Sunday at Rathert Stadium. The Junction City American Legion baseball team has been practicing, sometimes twice daily, for the last week to prepare for their season opener this week.

Catcher Keyahn Taylor bunts the ball during batting practice Sunday at Rathert Stadium. Taylor and the Junction City American Legion baseball team prepare for their season opener this week with a scrimmage Tuesday against Chapman.

Like other baseball teams in the county, the Junction City Senior American Legion baseball team has been hard at work preparing for their delayed season to begin, starting today with a scrimmage against Chapman at 6 p.m. at Rathert Stadium.

“It's been good to get back,” said coach Pat Stivers. “The main thing that we're really trying to do is get our arms healthy and trying to manage how much throwing they're doing, getting a lot of reps at the plate and a lot of tee work. Basically, a lot of fundamental work — kind of get them back in the groove for where we left off from spring season.”

With two-a-day practices the team has been hard at it for over a week getting back into the groove and returning to the mental aspect of the game. With nearly a three month break, Stivers said the team has adjusted well to being back on the field.

“I think in the next couple days, we'll really get a better indication of what kind of shape they're in,” he said. “Right now, they have just been kind of going on excitement and adrenaline and once we start playing, I think that'll give them a chance to rest a little bit too.”

Shortstop Russell Wilkey said the team has been meshing well as they bring in future freshmen to the predominantly high school team thanks to Stivers bringing them together early.

“We had a group text and coach Stivers has just been keeping us in touch throughout this whole coronavirus and stuff like that,” he said. “So to be back out here with the team it feels great, and we're all excited. This year we have a bunch of young guys, but the good thing about that is that they've all played together. They've played together, so they had their chemistry. We've been combining really good already.”

Wilkey also emphasized the two-a-days has helped get the team back into shape as they “get a workout in the mornings” and are able to scrimmage amongst themselves in the evenings.

Wilkey and Jordan Kell are two of the players returning for the team with varsity experience, Stivers said. He looks at using this shortened season as a precursor to next spring when the team assembles under the high school logo.

“What we're looking for this summer is we're trying to develop some of these juniors going to be seniors and vice versa with the freshmen going to be sophomores, sophomores going to be juniors, trying to find guys that we can trust and we think can go out and play for us at the varsity level,” he said.

Standing on the sidelines watching the team take infield practice before they moved to hitting Sunday night, Stivers commented on how well the turf and the outfield looks with the limited playing on the field since its completion last year.

“If there's any positives from not playing it's really given the outfield time to to grow and fill in and level out,” he said. “I’m telling you this is such a beautiful field that kids are excited to be on it. We're excited to be on it kind of gives you a little extra boost energy to want to come out and play baseball and with this summer it's allowed us to have a few tournaments to bring some teams in that normally wouldn't play out here from different areas in the state. My thing is once we get teams up here they're gonna want to come back and play.”

The schedule is mostly filled through July with baseball action for the team, with one cancellation due to the location of a teams field with Junction City hosting two tournaments — one in June and one in mid-July. Stivers is looking at filling the void with another tournament.

Currently the team opens today at 6 p.m. with a scrimmage against Chapman before hitting the road Friday and Saturday to compete in the McPherson Tournament. First pitch is scheduled for 9 a.m. Friday. On June 11, the team travels to Salina before their home opener June 12 against Rossville. First pitch is slated for 6 p.m. on both contests.

“We're just gonna kind of play the scrimmage by ear,” Stivers said. “We’re not sure how many innings it will go — it all depends on our arms and how much we can pitch. And again, that's something that I'm really watching. That's something we watch every day as a coaching staff, who's doing what, how much they're throwing and how each how each player's arms feel. But, I think, it's really good to just get back in and start seeing some live pitching and and get back into it.”

The Rossville game will be the first of four-straight home games — June 16 against Topeka, June 17 against Hawks, June 20 against Falcons — before two road games June 21 at Falcons and June 23 at Topeka.

The Blue Jays return to Rathert Stadium June 26-28 to host the Junction City Tournament. Check back later in June as the July schedule becomes finalized.