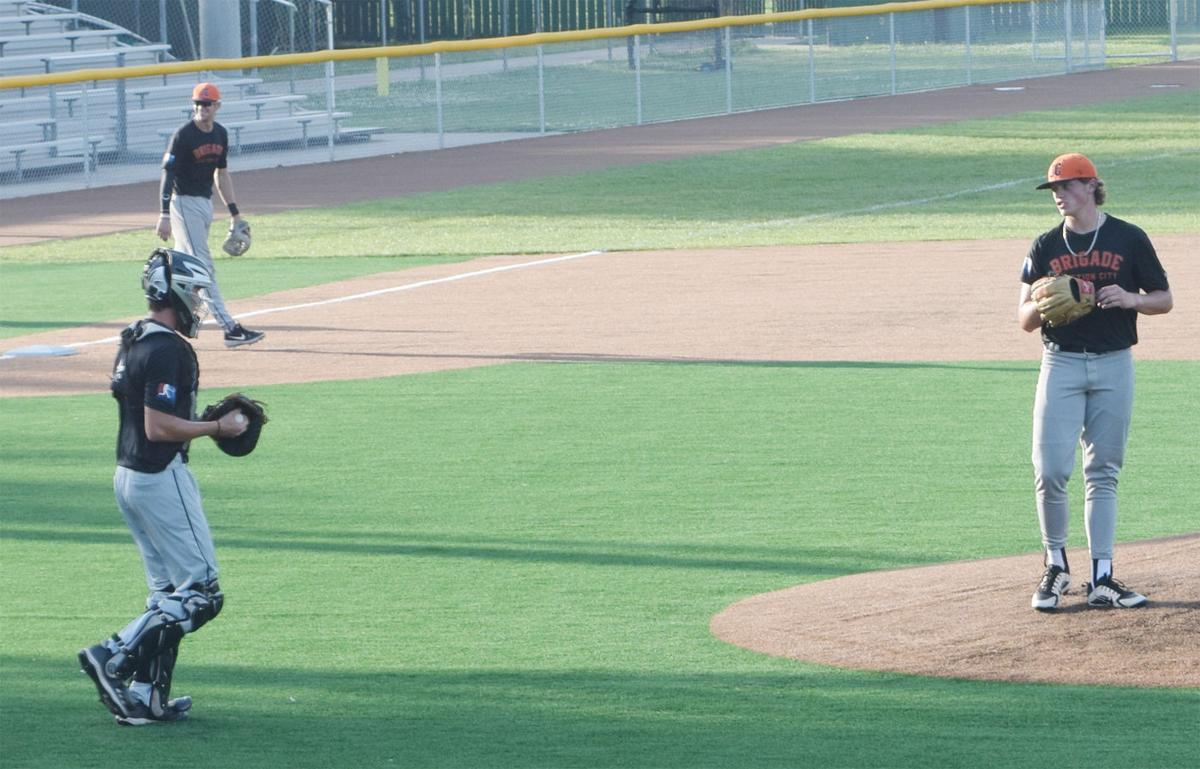 Brigade catcher Cooper Turpin sets out to talk with pitcher Thane McDaniel during Friday night's game against the Barnstormers. 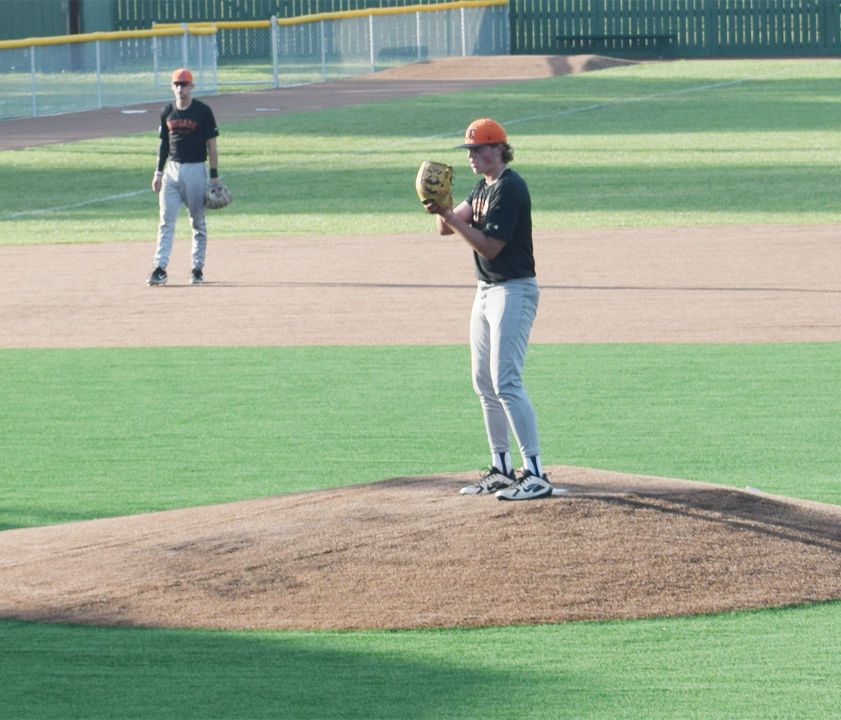 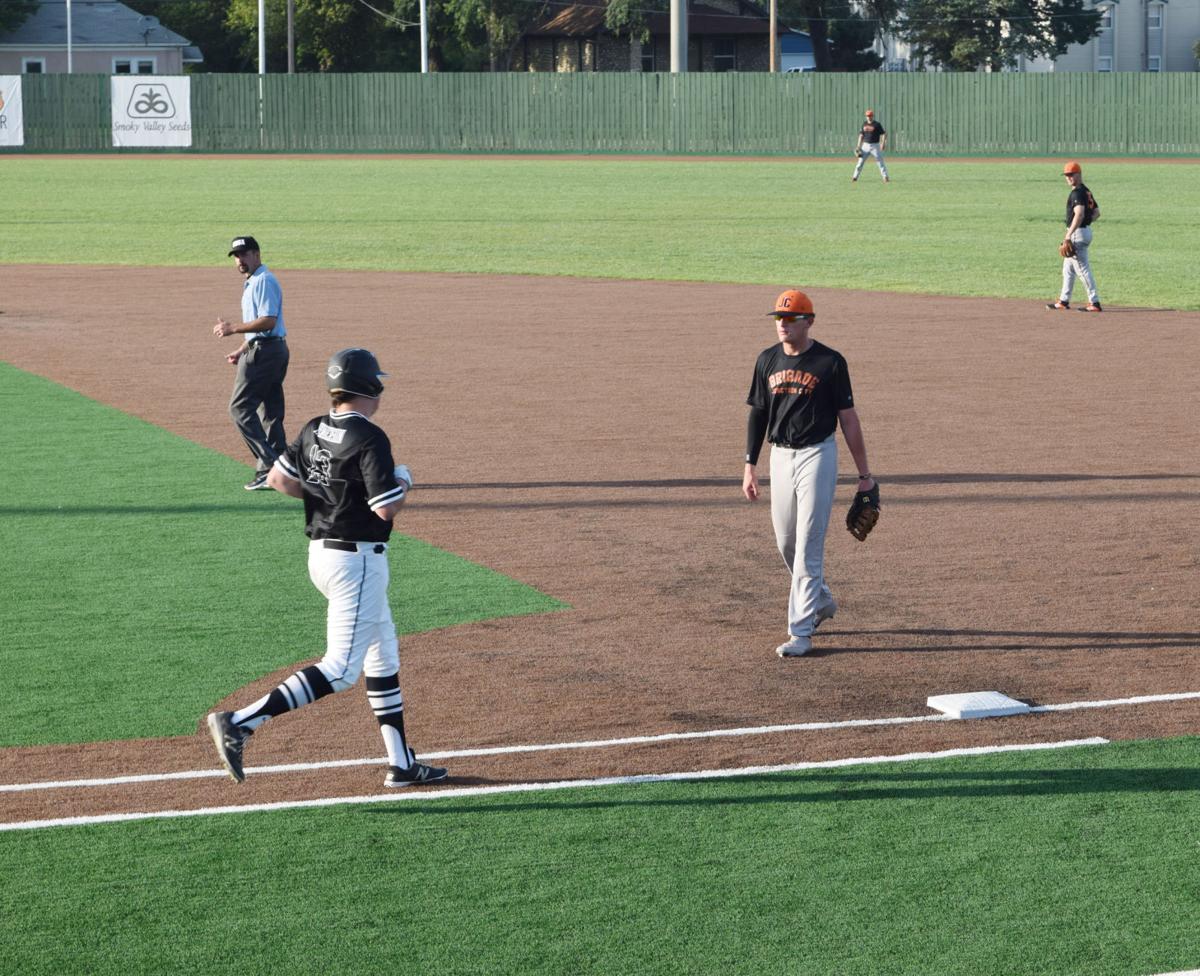 Coming into a two-game series with Barn Baseball Academy, Junction City Brigade head coach Derek Francis stressed the importance of not sleeping on the Barnstormers. With the Midwest A’s coming into town for a doubleheader Saturday, it was crucial to not overlook the Barnstormers in preparation for the A’s, which the Brigade are neck-to-neck with in the standings. Even though the Barnstormers aren’t league competition for JC, the games serve as valuable playing time for players to hone their skills, and get better for the games that count on their record. The Barnstormers gave JC two tough games Thursday and Friday night, but the Brigade survived both.

The Brigade tagged the Barnstormers on Thursday night for 25 runs, cruising to a 25-3 win. But Friday night proved to be a much tougher contest. JC was caught in an early 9-3 deficit in the third inning, a margin the team rarely finds itself in. With just two losses on the season, the Brigade needed to put together a performance players were not accustomed to. But in a collective effort, the team rallied.

JC cut into the lead in the bottom half of the third inning when Nic Swanson doubled. He later ended up scoring on a passed ball. The two-out rally continued with a Cooper Turpin walk and a Cooper Schlochtermeier base hit. Tyler Halstead then walked to load the bases for Carson Sader, who responded with a two-run double that put the Brigade within three runs.

The Brigade continued to cut into the lead in the fourth inning. After a Ryan Gendron single, Oklahoma State product Adam Becker sent one deep to right-center over the wall to close the gap to 9-8. The clutch two-out slugging continued later in the fourth when Tyler Halstead brought two more home on a single to give JC a 10-9 lead.

The Brigade never surrendered the lead after that, and held on for a 14-9 victory. Pitchers were used sparingly over the last two games in preparation for the much anticipated showdown with the Midwest A’s on Saturday. So there is a good chance that Rathert Field will see pitchers going deeper distances, pending their performances. JC will look to separate itself from the A’s in the standings in Saturday’s doubleheader, with the first pitch slated for 4:30 p.m. at Rathert Field.