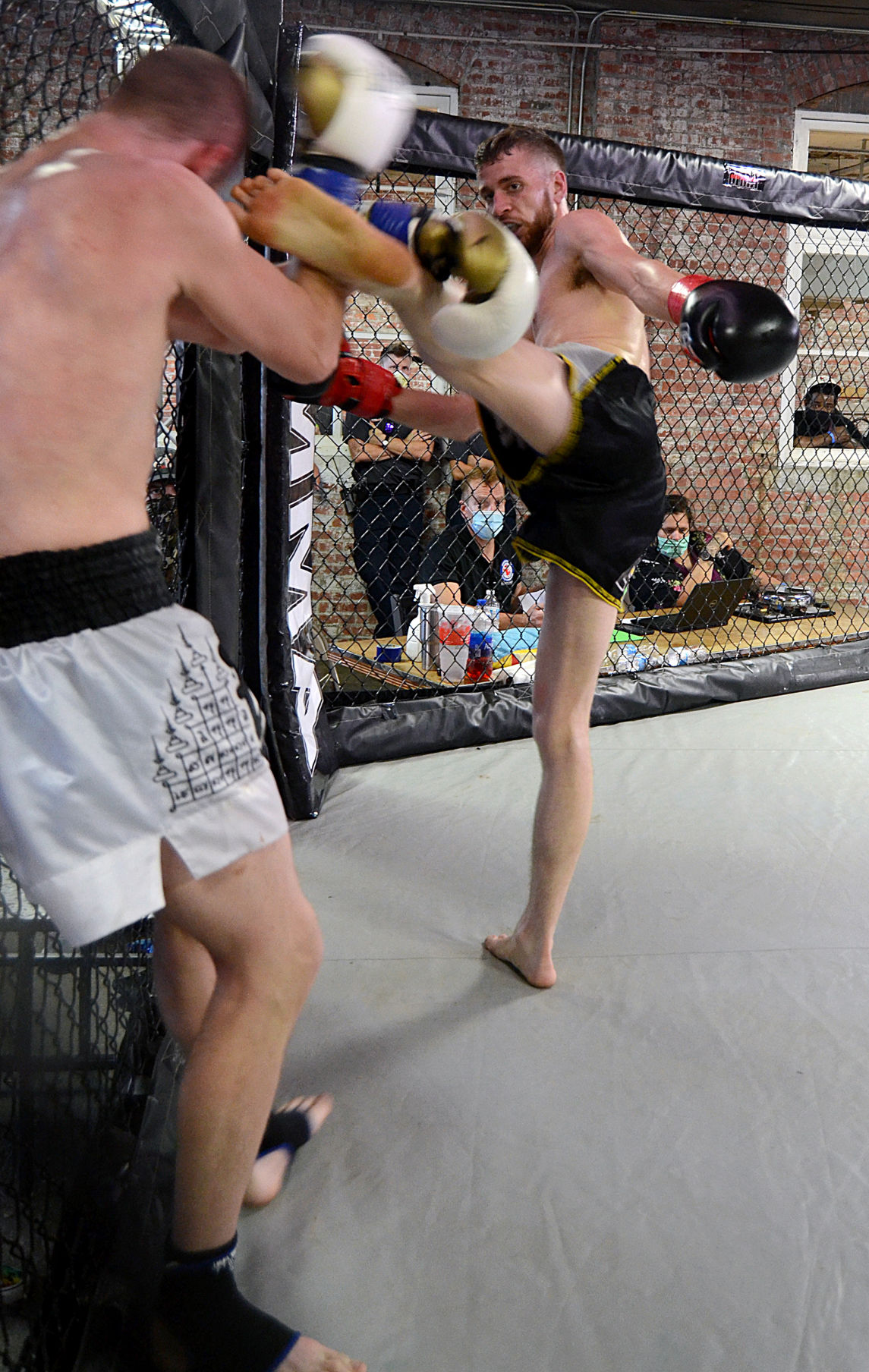 Austin ‘the Alpha’ Mayle places a left kick into Braiden Howell during the second round of their kickboxing match Saturday during th Release the Beasts event put on by Carden Combat Sports and Never Surrender MMA in Abilene. 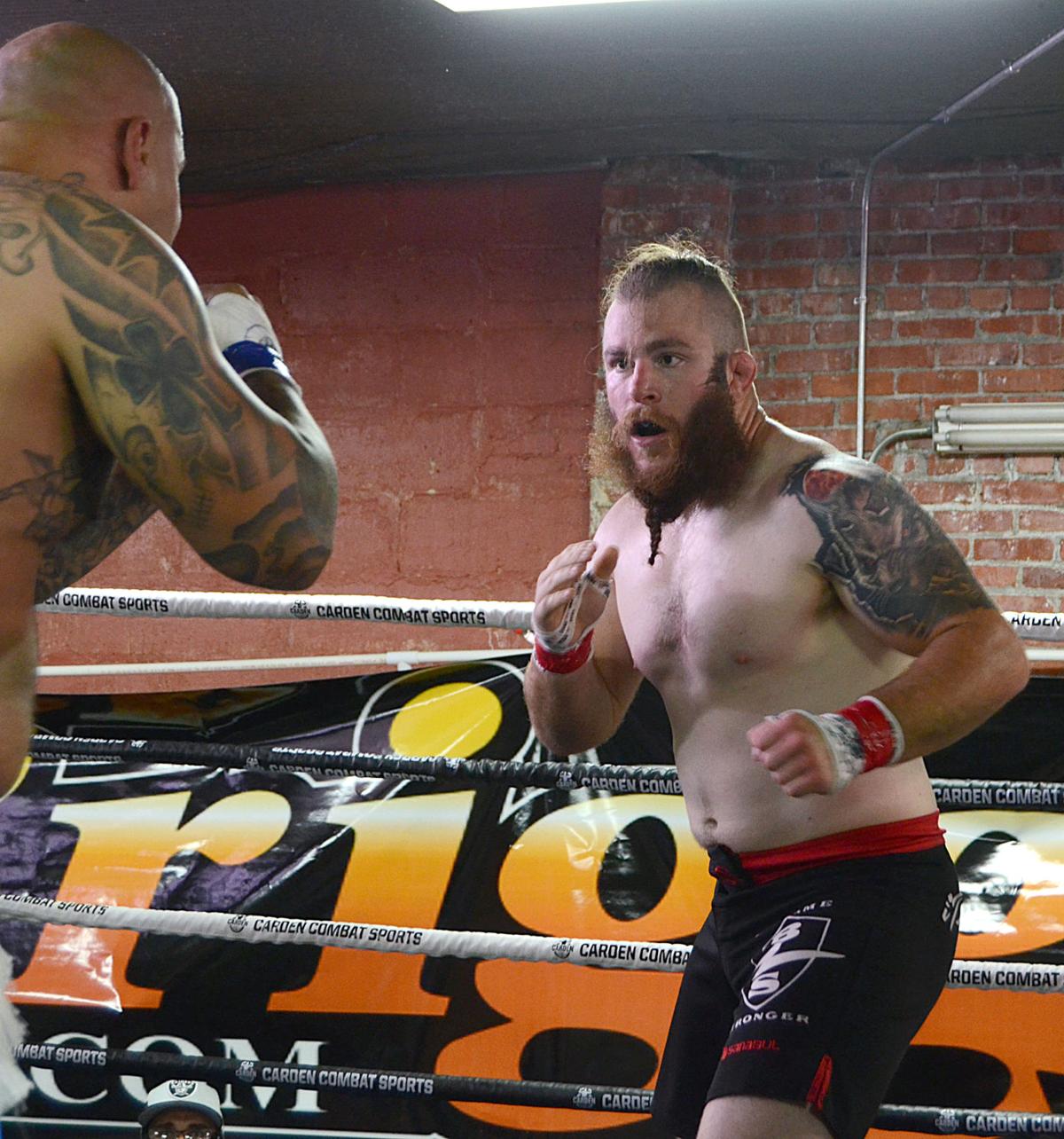 Austin ‘the Alpha’ Mayle places a left kick into Braiden Howell during the second round of their kickboxing match Saturday during th Release the Beasts event put on by Carden Combat Sports and Never Surrender MMA in Abilene.

“Well, it feels great to be back at it,” said John Carden, Carden Combat Sports. “I travel the country doing a lot of different things in a lot of different places, anything from ring rentals to managing guys to promoting shows, working behind a lot of these events and I just wanted to help get guys active again. And as it turns out, I didn't know it at the time but we're going to be doing the first professional boxing show in this town since September 1919 so a little over 100 years ago.”

The night was scheduled to take place in Topeka, but due to limitations set forth by the county health department, the fight had to be relocated to Abilene — the home gym of Never Surrender MMA.

“Well, it's not the gym, it's just the community of Abilene,” said Sam Kleinbeck, co-owner Never Surrender MMA. “I mean, 101 years without any professional sports and we knocked them all out. We're making history in the world right now. No one's ever done a five combative sports on one card show ever. And we're making history right here again on Texas Street where so many things have happened. History has been made all around this town with presidents and we're just putting our notch in that belt.”

The partnership between Carden Combat Sports and Never Surrender MMA happened thanks to a little influence by the Kansas Athletic Commission.

“Well, he's a boxing promoter and now we really don't do boxing, we don’t have a ring,” Kleinbeck said. “The state came to us and said hey, let's do something, let's put on a show. ‘Which one of you guys want to do it.’ He could only get a few boxing matches, I could only get a few, so we said, ‘let's just put them together and let's put on a real good show that we can put on fitetv.’ (We) can't have any audience because of the COVID, we have to wear the masks and six foot distancing so here we are on fitetv, putting on fights.”

The lack of a live audience was a new experience for the fighters. They were able to clearly hear their coaches while also listening in to their opponents coaches during their bouts.

“I like to hear both,” said kickboxer Austin Mayle. “If I can hear my opponents coach, that's cool but as long as I can hear them I'm, I'm good in whatever situation I'm put in.”

Mayle defeated his opponent in the second round to move to 10-1 in his kickboxing career. Mayle is also 3-0 as a MMA fighter. Mayle credited his coaches at Rico Steele’s Martial Arts Academy in Junction City for his training.

Also competing under the Rico Steele Martial Arts Academy banner was Isaac Doolittle in the first of two bare knuckle bouts schedule on the fight card. Doolittle also defeated his opponent in the second round of his bout and was surprised by his opponent when the bell rang starting the match.

“It went a lot faster than I thought it would,” he said. “(In) boxing you kind of feel each other out. He jumped the gun. And we've been working inside boxing, so I pop right to that under hook bop bop bop. We went from there. After a while, he started jabbing real lazy.

“So I tried to punch his knuckle — he didn't like that, he tried to punch mine and then I popped him in the face,” he added. “So, second round came in, got good corner advice from Marcus (Barrett), Rico was shouting, [Donald Holliday] was hollering — all around good came out. I did that sidestep cross right into the money.”

Carden said bare knuckle fights have a deep history that led to the early days of boxing.

“It's where boxing first originated from really,” he said. “It's your old, John Sullivan bare knuckle, you know, barnyard type fights. He was actually what we consider the first heavyweight champion in boxing, but he's actually the bare knuckle champion before that. There was a Police Gazette belt and so forth and that's pretty much, you know what everybody's fighting for again today — so that's pretty neat and nostalgic. And if you go back into the 1800s that's bare knuckles where it started and that's why we're boxing today.”

Frank Portillo, Never Surrender MMA, said the display of combat sports is a way for two people to train to beat each other up, but at the end of the bout they share an appreciation for their competitor and wish them well in the future.

“I call it humane,” he said. “That's what I call it. I call it us being humans at the highest level of the combat that we are doing. Because once again at the end of the day, no one's dead. No one's died. Got a little bit of blood, maybe a broken nose. But you're still able to walk away, pulling your head up high. I trained hard, fought hard, but today wasn't my day. I'll just come back stronger.”

The sport is also a way to bring people together, Portillo said.

“I think on a personal note, with everything that's been going on between COVID and the racial tensions just nationwide and worldwide, that you can bring black, brown, white, yellow, female, male into a cage, shake hands, fight, hug afterwards, because it's not about the color it's about human being — Win lose or draw. We're all humans.

“So it's important that people understand one-on-one combat is the truest form of combat, it is not a team sport,” he added. “Once you step inside that cage you are by yourself, and color all that bullsh*t goes out the [f-ing] window. Because it's only you and that person staring at you at the end of the day.”

Number of viewers from the night will not be available for a few weeks, but the smiles on the competitors faces showcased the success of the evening.