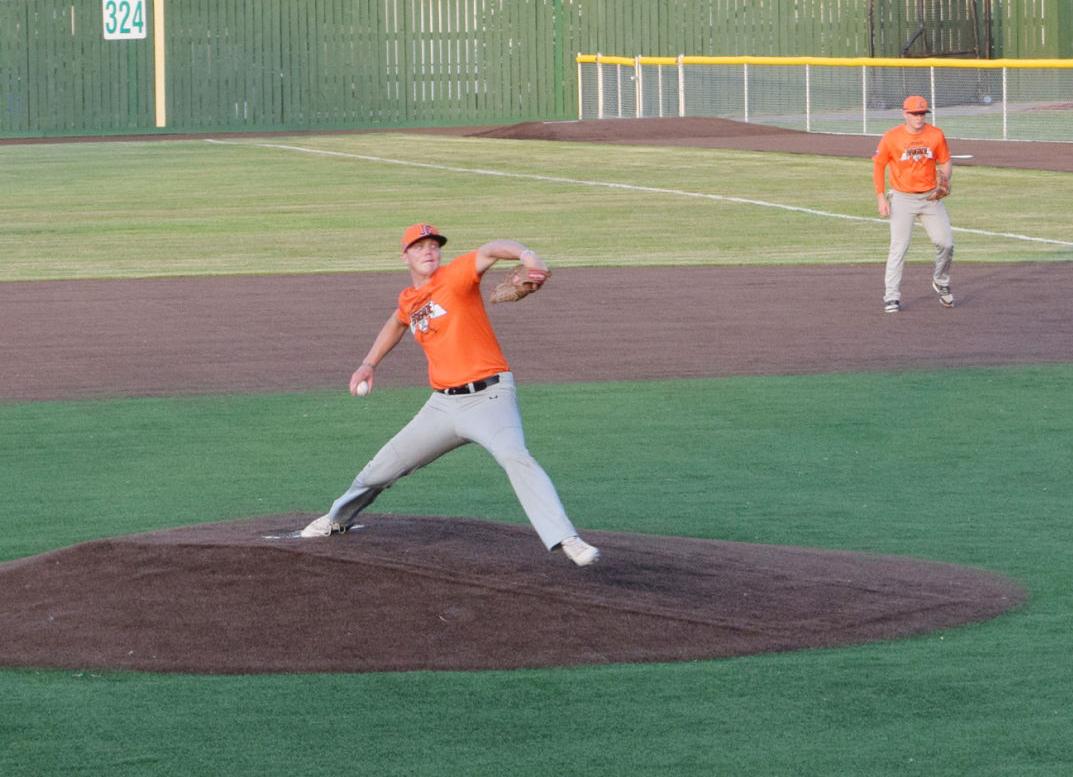 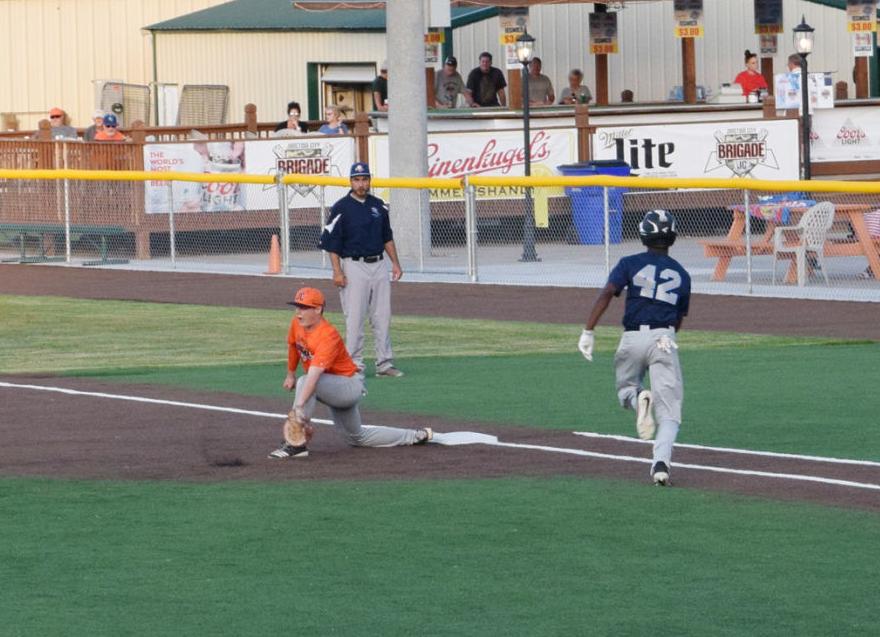 Zane Schmidt attempts to scoop the ball at first base Monday night. 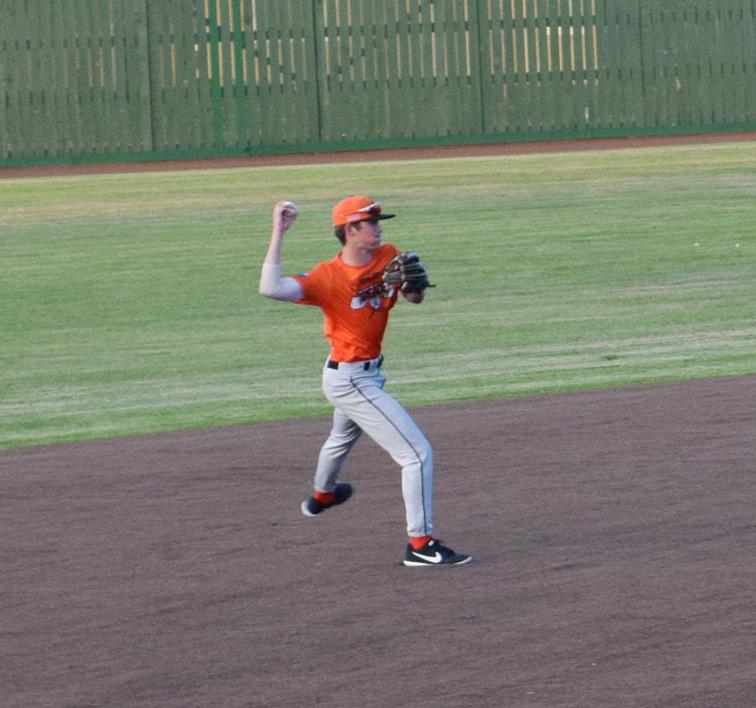 With the Junction City Brigade trailing 12-7 to the Baldwin City Blues heading into the bottom of the ninth inning Monday night, it was not a fun baseball game by any means, according to head coach Derek Francis.

Walks, hit batters and errors consumed a large portion of the game, and it just didn’t seem like the Brigade’s night.

“For eight innings, it was rough,” Francis said. “We didn’t come out and play very well. The pitching wasn’t good; we didn’t come up with the timely hits. It was just a rough game. You go into the ninth down by five and almost you think you don’t have a chance.”

Francis is still learning about his players — with many of them new to the team — and wasn’t sure what to expect from them in the ninth. He didn’t know if this was going to be a team that stepped up to the plate to try a late rally or if players were going to pack it in and try to get home early.

At a quiet Rathert Field trailing by five runs, JC’s Carson Zenger led off the ninth by reaching first base on an infield single. Walks by Dylan Thurber and Kade Wallace loaded the bases. With one out, Carson Sader stepped to the plate, and knocked in two runs on a single to bring the Brigade to within three. Zane Schmidt then got hit by a pitch and another run scored. The crowd started to feel a bit more energized as George Specht — one of the more successful offensive players on the night — walked to the plate. Specht drilled an RBI-double to tie the game. With the next two batters drawing walks, the winning run sat at third base. Dylan Thurber, up for the second time in the inning, drew a walk on a high pitch that brought a Brigade run to home plate, as players celebrated a miraculous come from behind 13-12 victory.

Francis did not give a pep talk to get his guys fired up to fight in the ninth inning; it all just came natural to them.

“I didn’t say anything to them, I don’t know what kind of group I have to be honest with you; I hope it’s that group,” Francis said. “If we have that group, we are going to have a lot of fun this summer. But, you hope you aren’t in that situation a ton. You find yourself in that situation more times than not, you’re not going to come out on top. We talked about being down 12-7 after eight innings, that probably shouldn’t happen. I feel like we got the guys in here to play better baseball than we did through the eight innings. But when you are down and you can come back like that, that’s the type of group you want.”

It was the type of game you don’t see often, Francis said, and someone had to come out on top. Francis utilized multiple pitchers Monday night, hoping to see what he has moving forward. They struggled to find their groove for the most part, but he’s optimistic they’ll get there.

“I don’t know if it’s nerves or what, but I think they’ll settle down for the most part,” Francis said. “We have strike throwers and we have good ball players.”

The Brigade (2-1) will be right back at it against Baldwin City Tuesday night. Francis hopes to see the team that finished Monday night’s game, not the team he witnessed in the first eight innings.

“Tomorrow’s going to come quick, that’s the good thing about baseball,” Francis said. “As soon as we forget about the first eight innings, I like our chances for tomorrow if we remember our ninth inning. Our bullpens are a little thin, so hopefully we can get a good start out of our starting pitcher tomorrow. If not, we are really going to have to scrap it together and hopefully we really hit. I’m sure their bullpen is in the same situation ours is in. We’ll just have to wait and see and it’ll probably end up being a game where whoever hits more is going to come out on top.”