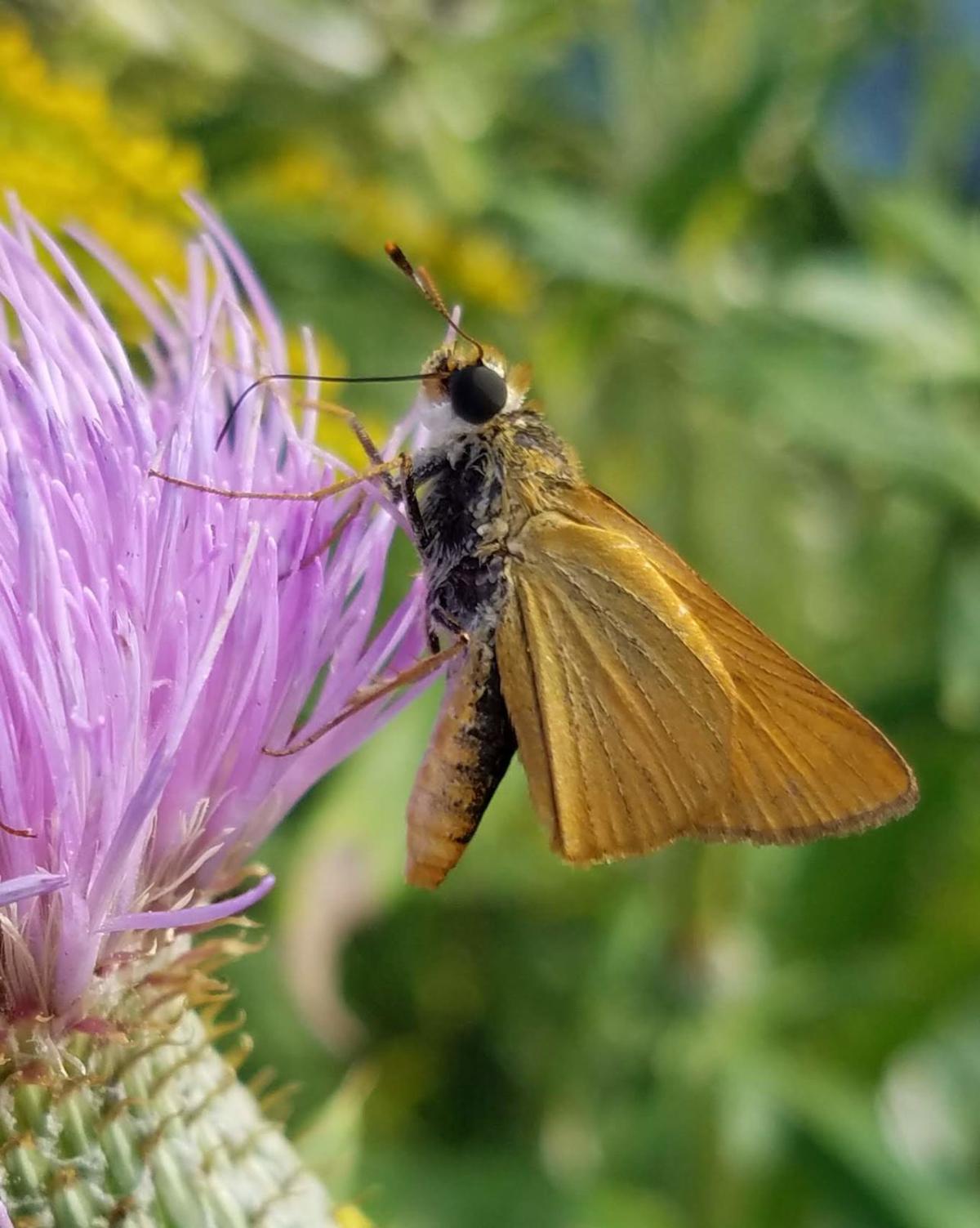 A Delaware Skipper takes in the rich nectar of Tall Thistle. This butterfly is part of a sub-family called ‘Grass Skippers’--so called because grasses and sedges are the host plants for their caterpillars. 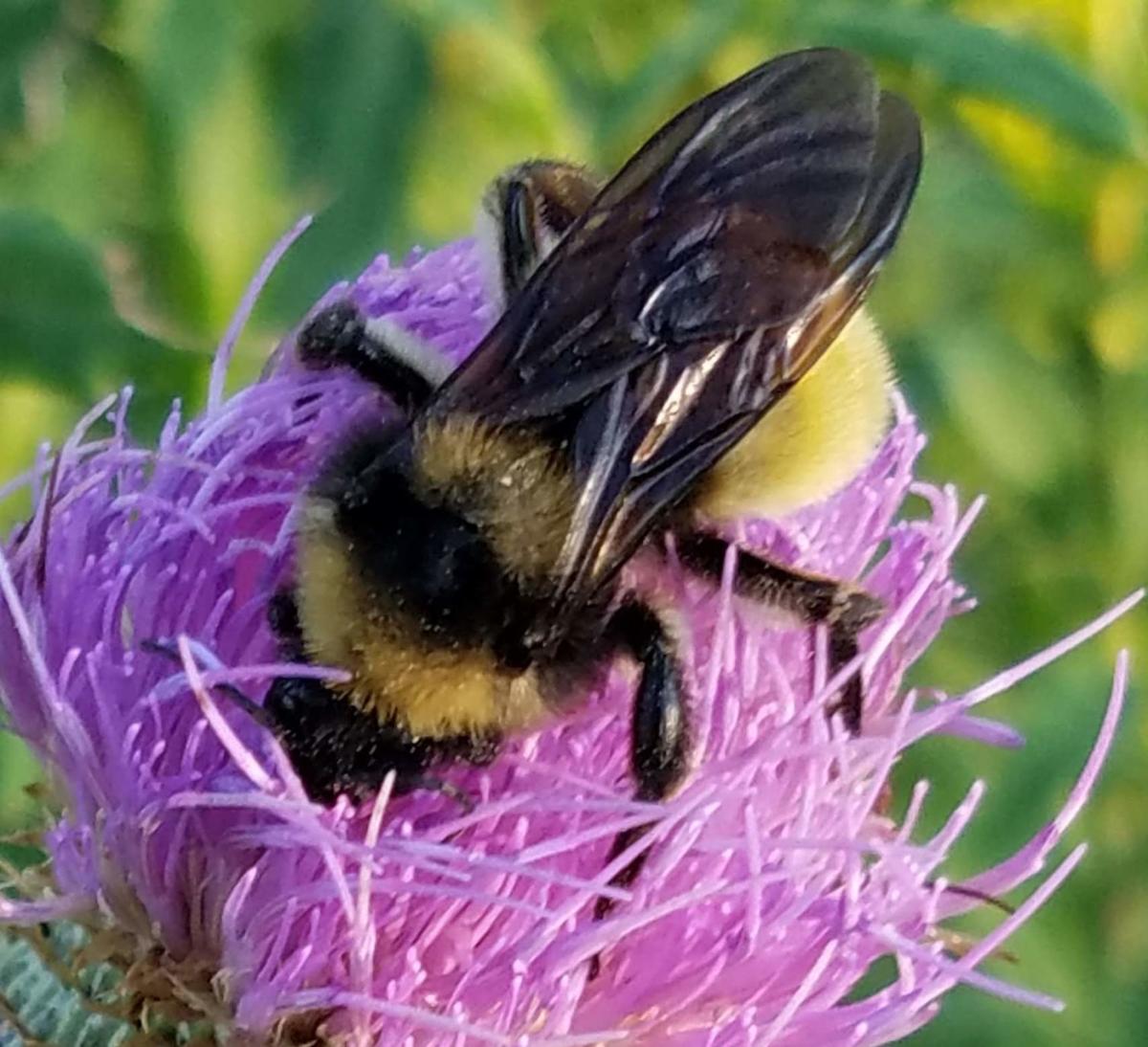 American Bumblebees, Bombus pensylvanicus, are declining in much of their range. But this one is flourishing, finding nourishment in the disk flowers of Tall Thistle.

A Delaware Skipper takes in the rich nectar of Tall Thistle. This butterfly is part of a sub-family called ‘Grass Skippers’--so called because grasses and sedges are the host plants for their caterpillars.

American Bumblebees, Bombus pensylvanicus, are declining in much of their range. But this one is flourishing, finding nourishment in the disk flowers of Tall Thistle.

The Tall Thistles are blooming!

Thistles get a bad rap because of non-native, invasive species, such as Musk Thistle and Bull Thistle, which have been declared legally Noxious Weeds and must be removed.

They contribute so much that any garden can become more wildlife-friendly if it just includes some thistles.

Thistles are members of the Sunflower Family, with some key differences from their kin.

The common sunflower has a compact center surrounded by bright yellow “petals”—which aren’t petals at all but rather “ray flowers.” The center is also composed of tiny flowers, called “disk flowers.”

In contrast to common sunflowers, thistles have only disk flowers. Thistles’ smaller, urn-shaped heads, crowned with tubular pink flowers, concentrate pollen and nectar in a way that attracts eager visitors.

There is so much life swirling around thistles that they can become a learning center, a quick “in” to the natural world.

That’s why I enrolled in Thistle School!

This summer my first teacher was Wavy-Leaf Thistle, a low-growing, June-blooming perennial with silver-green leaves and dusty pink flowers. I signed up for late afternoons, when I, the sole student, could settle into a lawn chair near the thistles, camera in hand. The first lesson was about attraction, as one creature after another was drawn to the plants. I tried to record their arrivals and interactions, to study them later.

Among the thistles’ visitors were Ruby Throated Hummingbirds, who came every evening to drink nectar; and tiny, wondrously patterned Paracantha flies, who explored the plants for nest-sites. Butterflies, moths, beetles, and bees also appeared, and that’s where homework came in: Every night I had photos to send to experts, who bit by bit helped me identify and then learn more about the visitors. (I use bugguide.net but others have good luck with iNaturalist.org)

In this way I learned that Wavy-Leaf Thistle was feeding American Bumble Bees (a species in decline); and nurturing Silver-tailed Petalcutters--pudgy bes so cute and fuzzy you want to pat them. These bees are members of the Leafcutter family—bees who line their nests with leaves—but Petalcutters are true romantics, lining their nests with flowers instead.

After several days, the subject matter became more difficult. I noticed something strange about Wavy-Leaf’s bracts. The thorny spaces just beneath the flowers were filling up with bug bodies. Some remains were intact enough to show that they had once belonged to beetles, while others were only pairs of legs, or half-abdomens, impossible to identify.

At first I thought that heedless insects had impaled themselves on thorns. Perhaps they had been too eager to get to the nectaries and hadn’t watched where they were going. But closer inspection showed no signs of piercings, or skewerings.

So what had killed these bugs?

Here was another homework assignment!

This time I went to Kansas Arthropods, a Facebook group that brings enthusiastic amateurs together with generous professionals, who share their knowledge.

I posted photos of the carnage and asked: What’s going on?

Before the experts could reply, I posted a new photo that I thought answered the question.

The photo showed that just beneath the insect corpses there lurked a living creature, with eight brown legs—a spider.

So that explains it, I thought. Spiders were the killers!

But a little learning is a dangerous thing.

The next day one of the experts linked us to a 2015 blog essay by “The Prairie Ecologist,” Chris Helzer, Director of Science for the Nature Conservancy in Nebraska.

The essay was entitled “Killer Thistles.”

It informed us that thistle bracts exude a sticky substance that entraps insects, fatally.

My spider was just a coincidence, or perhaps a consequence, not a cause.

But getting a better answer was only the beginning of the lesson. Helzer’s essay asked a further question: Why would thistles have developed this adaptation in the first place? Could it be to deter ants from climbing up the stems to reach the flowers? Ants are not suited to carry pollen from plant to plant, so it would benefit thistles to keep ants away from flowers. Precious nectar could then be saved for real pollinators.

Helzer cited a study that explored some aspects of this possibility: Bracteal Exudates in Two Cirsium Species as Possible Deterrents to Insect Consumers of Seeds. Researchers removed the stickiness from the bracts of some thistles and compared their reproductive success to that of sticky plants.

However, the results were “inconclusive.” Indeed, on one experimental site, the non-sticky thistles did better than the sticky ones!

That was an important lesson from Thistle 101—that mystery swallows learning and vice versa.

Now Teacher Wavy-Leaf, gone to seed, is passing me on to Teacher Tall, Cirsium altissimum, just starting to bloom.

The first class was yesterday. It featured a Milkweed Bug walking over Tall Thistle’s bracts without getting stuck at all. Why not? Does Wavy-Leaf exude glue but Tall does not? Or does this bug have some special foot construction that protects him? Milkweed Bugs eat milkweed seeds, and there were plenty of milkweed pods nearby. But this Milkweed Bug was focused on thistle. Why? He buried his proboscis in the bracts, and when he drew it back, drops of clear liquid fell from the end.

What was going on?

I guess these questions are my next homework assignment!

Thank you, Teacher Thistles, for providing such a lovely opportunity to learn.

A video collage of some of the visitors to Wavy-Leaf Thistle can be seen at https://youtu.be/9VZIO4Xzmkg

Margy Stewart and husband Ron Young live at Bird Runner Wildlife Refuge, a native-prairie preserve on McDowell Creek in eastern Geary County. They are both board members of Prairie Heritage, Inc., a 501©(3) non-profit corporation which links environmentalism to social justice, offers book awards, and organizes prairie experiences for people of all ages (prairieheritage.org). Margy is Emeritus Professor of English at Washburn University and a member of the team at the Global Restoration Project (globalrestorationproject.org). If you want thistle seeds, let her know. She may be reached at margystewart785@gmail.com