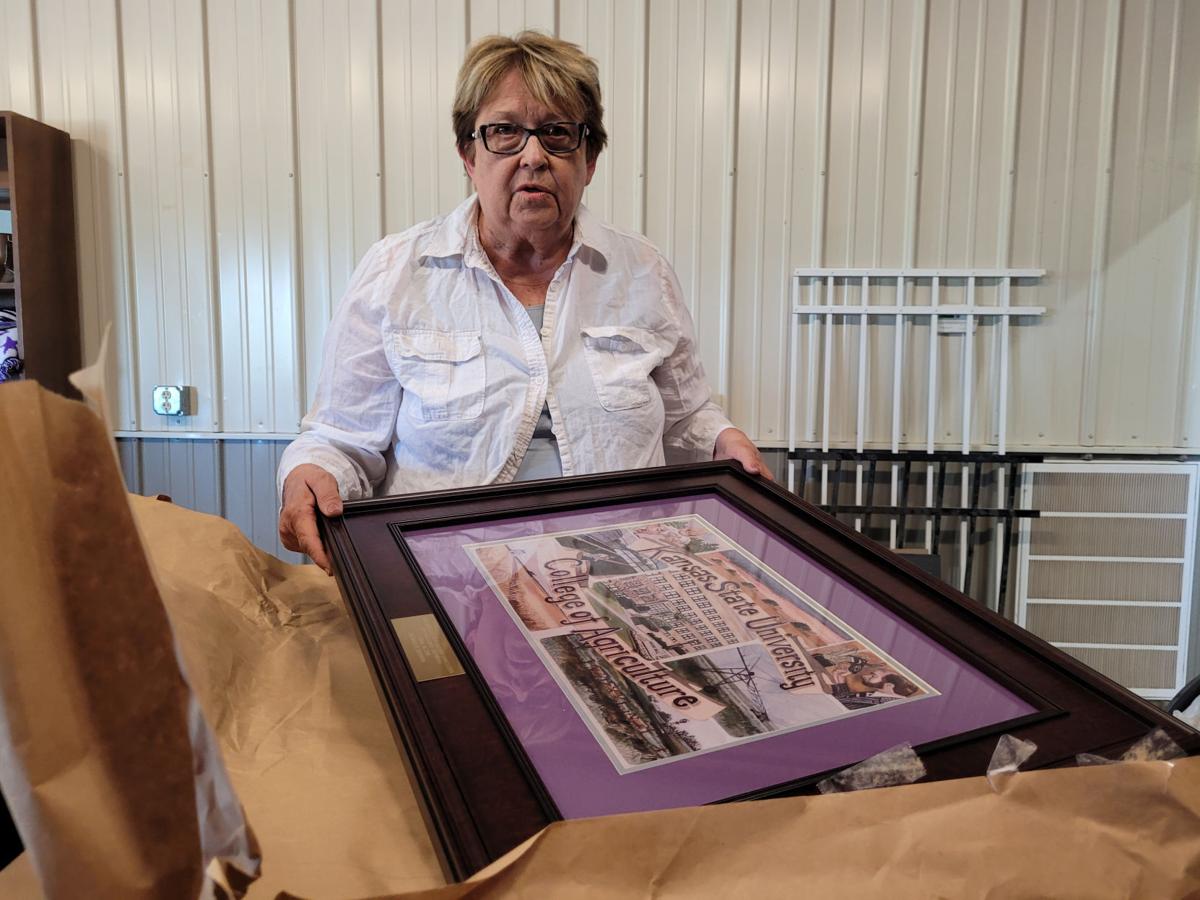 Deanna Munson holds a replica of a photo from Munsons’ Prime, pulled from the K-State archives. 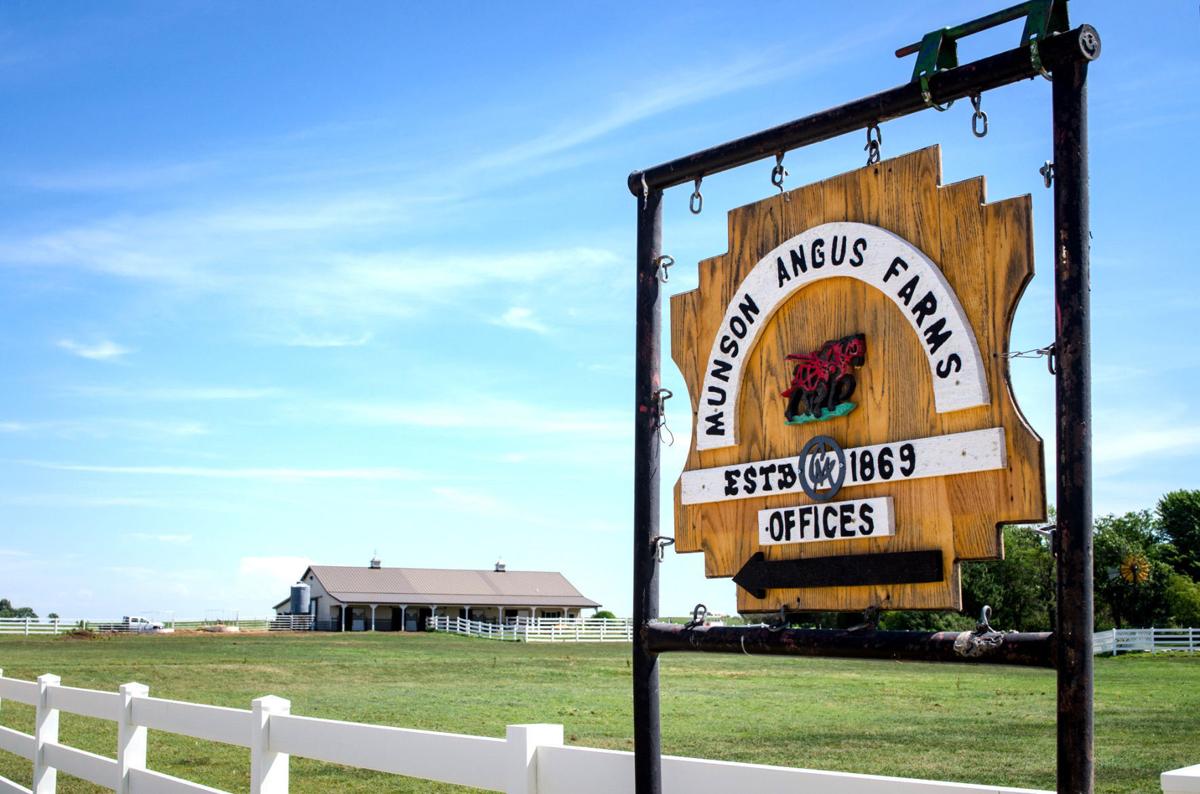 Munson Angus Farms has been home to a cow/calf herd of purebred Angus cattle for over 80 years, producing prime quality beef and raising the crops owners Chuck and Deanna Munson use to feed their cattle.

Deanna Munson holds a replica of a photo from Munsons’ Prime, pulled from the K-State archives.

Munson Angus Farms has been home to a cow/calf herd of purebred Angus cattle for over 80 years, producing prime quality beef and raising the crops owners Chuck and Deanna Munson use to feed their cattle.

With the investigation into the cause of the fire that burned Chuck and Deanna Munson’s restaurant — Munson’s Prime — in February undetermined after months of investigation, the Munsons have begun recovering what they can from the burned restaurant.

They have rescued several glasses and the Kiwanis bell from the restaurant. Some of what they were not able to save, the Kansas State University Archives have been able to reproduce, such as photos and awards.

“That kind of caring and support — it’s not all lemons,” Deanna Munson said. “This is just amazing to me.”

The Munson family has been in Geary County for the last five generations and a lot of their family’s personal artifacts — and other pieces of Geary County history — were in the building when it burned.

The family arrived in Geary County in 1869, according to Deanna Munson. Chuck’s great grandfather Carl Munson was a stonemason and he is responsible for many buildings on Fort Riley and at K-State.

The land the family donated to Aging Well recently was original Munson land. They have land in multiple counties now, but it all started in Geary County where they still farm to this day. Stone pulled from their land was used to renovate the Capitol building in Topeka several years back.

According to Deanna Munson, most people assume the CM on the Munson family logo stands for Chuck Munson, but it doesn’t. It stands for everyone in Chuck’s direct lineage — Carl Munson, Charles O. Munson, Ralph Conrad Munson, Chuck himself and their son David Charles Munson. Their granddaughter Camilla has carried on the tradition.

“The CM is the family logo ever since they came to the U.S.,” Deanna Munson said.

They have had the herd of cattle they have now since the 1920s, selectively breeding them until they ended up with the angus herd they have today.

The original herd started in 1924 and the lineage has remained the same.

“It’s still totally the same lineage,” Deanna Munson said. “We never buy outside cattle other than a few bulls for breeding stock to keep the genetic lines clean and that sort of thing.”

The cow-calf herd contains 250 cows — with calves approximately 500 head of cattle — and this number has remained steady over the years.

“We process approximately 250 head a year,” she said.

This is unusual for beef production, she said, which usually involves cattle being sent off to feedlots.

The Munsons’ animals are with them “from conception to plate” according to Deanna Munson.

Their cattle originally were sold to the Kansas City stockyards, she said.

“The restaurants in that day and age — in the 20s, 30s and 40s — would come to the stockyards and buy specific cattle because they wanted a certain kind of meat in their restaurant,” she said. “The Munson beef has always been genetically bred to create the highest quality — I guess I would say — a meat as possible. Most beef producers want to produce the most poundage. Well in this cattle herd, poundage isn’t nearly as important as that it produce a really high marbled meat. And if you control genetics for almost 100 years now, you can get some extremely high quality meat into the herd.”

According to Deanna, the Munson cattle were popular with restaurant owners until the stockyards eventually closed. The family began selling to Iowa Beef in Emporia. When Iowa Beef was bought out by Tyson, the family continued selling to Tyson Gourmet line which in turn sold the meat to steakhouses such as Ruth’s Chris.

When Iowa Beef closed in 2004 — at the same time as Deanna Munson retired from her job at K-State — the Munsons found themselves in a predicament.

“If you truck cattle more than 60 or 70 miles, they’re not going to be prime anymore,” Deanna Munson said. “The only opportunities we had to sell prime cattle as prime cattle in 2004 was either Garden City or Grand Island, Nebraska and both of those are way too far a distance to keep the quality — the prime quality of the animal. They bump against the trailer and they’re stressed out.”

They decided to start selling their own meat off the ranch.

They took meat to farmers markets in Manhattan and eventually Junction City. They opened a retail shop on Jackson Street. They still sell meat at munsonangusfarms.com online. Selling online has been hard, Deanna Munson said. They have to take their cattle to federally inspected processors in order to sell online, rather than the state inspected facilities they usually use.

“I will be the first one to say that meat sales online is an absolute nightmare,” she said. “It’s such a perishable product.”

If the buyer isn’t home when their order arrives, it could thaw on their doorstep or go bad.

The Munsons did not care for this process at all.

Then the family won a competition at the American Royal in 2013 The family has won multiple awards over the years for their work in agriculture, but this one had their meat in high demand in restaurants around the state.

“But they only wanted the steaks and an animal is 66 percent something other than gourmet steaks,” Deanna Munson said.

The Munsons were left with all kinds of hamburger, roasts and other cuts of beef.

Deanna Munson suggested opening a restaurant of their own. They could sell their meat and also showcase it. While Chuck Munson hates to brag — and most talk about his and his family’s achievements is bragging to him — Deanna Munson said she felt the meat needed to be showcased.

“We’re a family that cares a lot about agriculture and there’s a lot of things we can do for ag if we open something right on I-70,” she said.

They moved into the building that had once held the Sirloin Stockade.

There were problems with the building which they discovered after they bought it.

“The first piece of wallboard we took off their was mold behind it,” she said. “It wasn’t nearly in the shape that it looked like it was.”

They gutted the building and began making improvements.

The first two or three years in the restaurant business were rough, Deanna Munson said. Local processing was expensive as was trying to sell high-end steaks in the Midwest, she said.

“The first two or three years when we priced the steaks at the amount we needed to price them for in order to stay in business, it just shocked people,” she said. “It just didn’t work. So we decided, ‘ok, let’s bite the bullet, let’s underwrite this thing and let’s get it popular and we’ll just pay for what we can’t bring in in revenue.’”

For several years, the Munsons poured money into their business.

It was also hard to provide for customers what they wanted sometimes. Because the Munsons created their own product, once they ran out of a certain cut of meat, they were out of that cut of meat. Deanna Munson recalls a customer leaving the restaurant angry and cursing because he hadn’t been able to buy the signature filet — the restaurant had run out. There’s a limited amount of filets on an animal, Deanna Munson said.

“You get 32 max. In one night’s time, you can sell 32 filets easily,” she said. “We have no more unless we go out and buy meat and then they’re going to eat anything like they’re eating anywhere else.”

They had just gotten the business where they wanted it when COVID-19 hit.

And then the fire.

“If we had that restaurant open right now, we could be doing wonders with it,” Deanna Munson said.

This is why the Munsons are interested in the Brookville Hotel — another legacy business.

“If that materializes, we will be able to do what we originally set out to do,” Deanna Munson said.

There’s a limit to what the Munsons can say because they are still in talks about Brookville, but they fully intend to move forward with the business. They have already begun purchasing items they’ll need to make the business work when they reopen eventually, including having a hard-to-come-by five gallon ice cream machine remade by the person who made the original — someone who had been difficult for them to nail down at first.

“All I can tell you is it’s in foreclosure with the bank and that the former owners — and that’s public, anyone can go look it up — had not paid property taxes since 2016,” Deanna Munson said. “And they owed the bank enough that it’s been foreclosed. But all of that takes time to work out.”