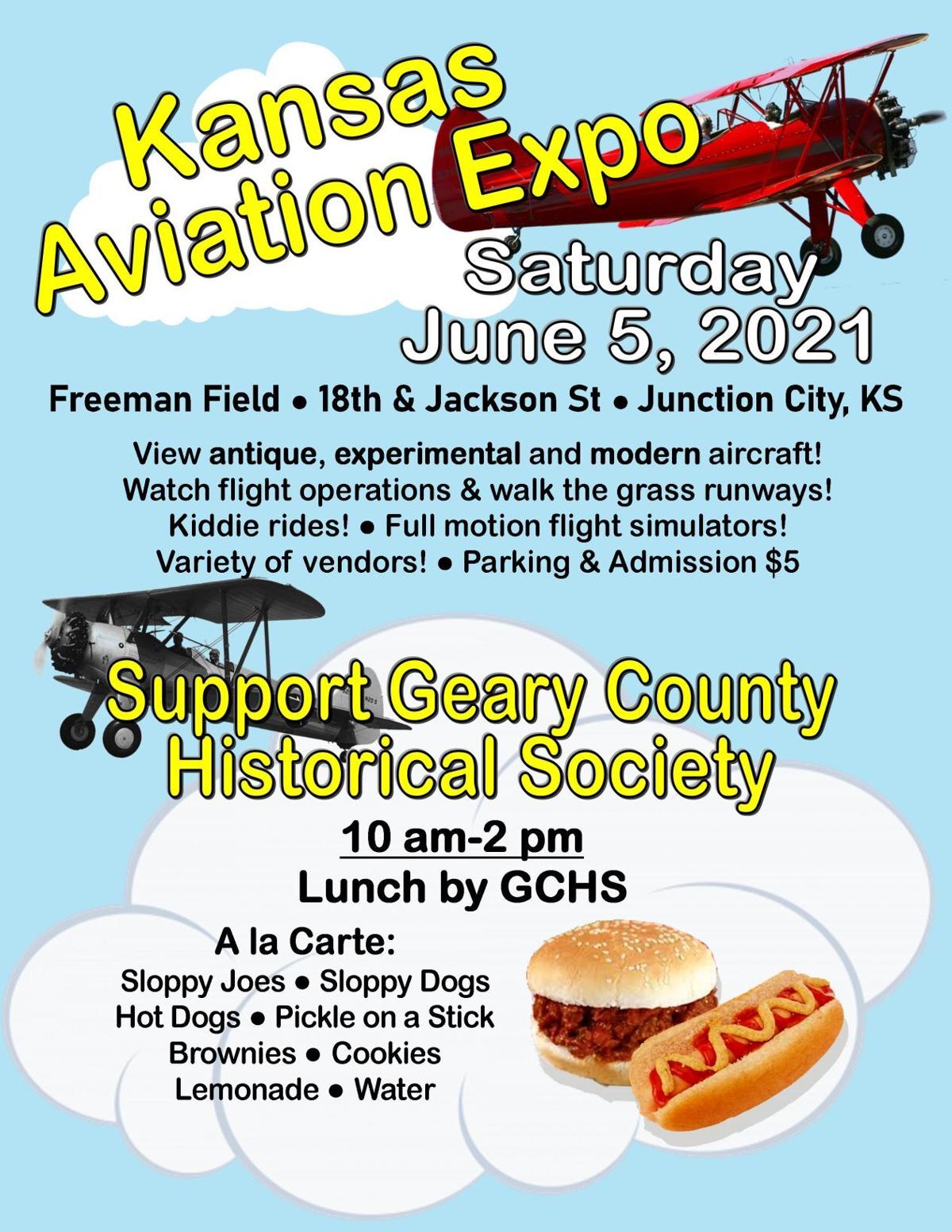 Join us at Freeman Field on Saturday, June 5 for the Kansas Aviation Expo and buy lunch from 10 a.m. to 2 p.m. to support Geary County Historical Society. 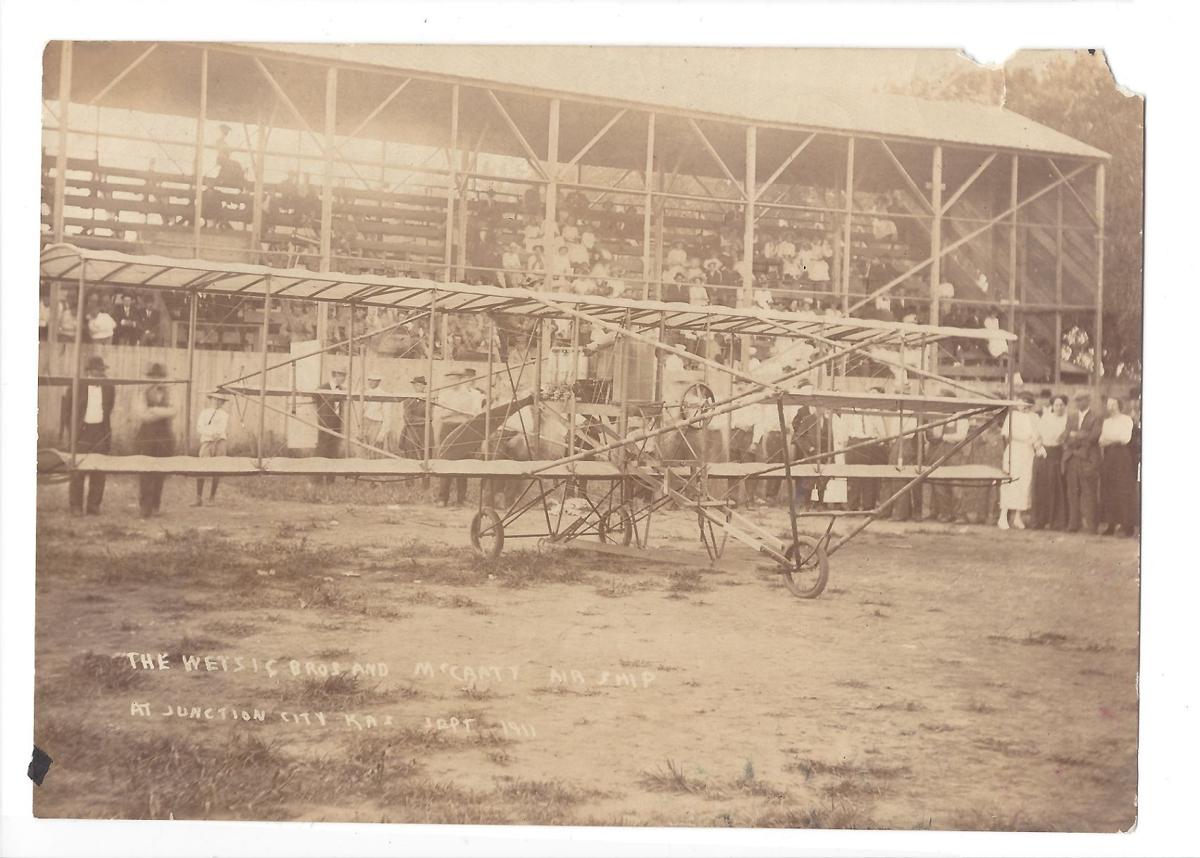 In September 1911, the local Wetzig brothers performed live demonstrations of their airplane to an excited crowd. The handwritten caption reads, “The Wetzig Bros. and McCarty Airship at Junction City, Kas. Sept. 1911.”

Join us at Freeman Field on Saturday, June 5 for the Kansas Aviation Expo and buy lunch from 10 a.m. to 2 p.m. to support Geary County Historical Society.

In September 1911, the local Wetzig brothers performed live demonstrations of their airplane to an excited crowd. The handwritten caption reads, “The Wetzig Bros. and McCarty Airship at Junction City, Kas. Sept. 1911.”

Catch a glimpse of history Saturday, June 5, at the Kansas Aviation Expo at Junction City’s Freeman Field, where antique, modern, and experimental aircraft will be on display all day starting at 7 a.m. Geary County Historical Society will serve lunch from 10 a.m. to 2 p.m., including popcorn, sloppy joes, hot dogs, lemonade, and more. Parking is $5.

Aviation history in Junction City stretches back over a century, to just a few years after the Wright brothers flew the first successful airplane in December 1903 in North Carolina. Junction City’s earliest pilots were Herman and Henry Wetzig, known locally as the Wetzig brothers.

Airplanes were a tremendously popular attraction at local fairs and celebrations, and in September 1911, the Wetzig brothers attracted great crowds and several amateur photographers when they performed a demonstration of their own flying machine in Junction City.

“Wetzig brothers, the local aviators, allowed large audiences what they could do in the flying line, and the crowds that went out to the ball park Saturday and Sunday afternoons were well pleased,” the Daily Union reported September 14, 1911. “On account of the adverse weather conditions no flights were made until well along in the evening on either day. Saturday, Herman Wetzig made a short flight, after which Henry Wetzig made a long flight, covering about six miles. ... The flights demonstrated that the Wetzigs know the flying game and that they are eager to please. Yesterday afternoon the flying was dangerous, but rather than disappoint the crowd that had gathered, the Wetzigs determined to go up.”

The following information is excerpted from a 2014 Museum Musings column:

Back in 1910, Herman and Henry Wetzig were making history when they flew their Curtiss machine.

They had become fascinated with flying when they saw two Wright planes at Fort Riley. It didn’t hurt when they learned a pioneer barnstormer by the name of Bud Mars had received $10,000 for flight demonstrations at the state fair in Topeka.

They traveled to the Curtiss factory, which was located in Hammondsport, N.Y. to see the aircraft for themselves. The Curtiss Aeroplane and Motor Corporation later would merge with the Wright Aeronautical Corporation (Wilbur and Orville Wright) and become known as the Curtiss-Wright Corporation. The company was a leader in aviation development.

The brothers located a Curtiss flying machine for sale at a factory in St. Louis. They were impressed with the machine and bought the craft for $4,000. With this purchase, they became the first private owners of an airplane in Kansas.

This flying “contraption” featured an open fuselage, a pair of wings and a four-cylinder “pusher” motor. The pilot sat on a small open seat out in the open in front of the wings. While thrilling, the operators were literally “flying by the seat of their pants.”

Luck was on their side, and the company that manufactured the plane also taught a flying course. As the Curtiss machine only had one seat, there was no way for a flight instructor to go up with the pilot. The instructor explained the mechanics of the plane to the student. The student then taxied the plane across the field a couple times.

Once that had been mastered, the student was then “to take off and land in about 100 yards.” This was done until the student was accustomed to the plane. The brothers graduated from the program in about a month.

The school also set them up with their first contract, which paid $1,500. It was to perform two 5-minute flights at the fair in Concordia.

The brothers performed in towns throughout western Kansas. When the weather turned cold, they would travel south and perform throughout Texas and New Mexico. Despite the high fees they were commanding for their performances, they didn’t consider the business a success. Most of the income was eaten up by repairs. The planes were not able to make flights of any great distance, and the Wetzigs had to ship the plane by railroad to the next demonstration, another expense.

Herman Wetzig stated in his later years he got awfully tired of bolting together and unbolting the plane at every stop.

Geary County Historical Society is indebted to Josephine Munson for her original research on the Wetzig brothers.

If you have any questions about the Kansas Aviation Expo fundraiser on June 5, please contact the museum at 785-238-1666, or gearyhistory@gmail.com.

KATIE GOERL is the Executive Director of the Geary County Historical Society in Junction City.