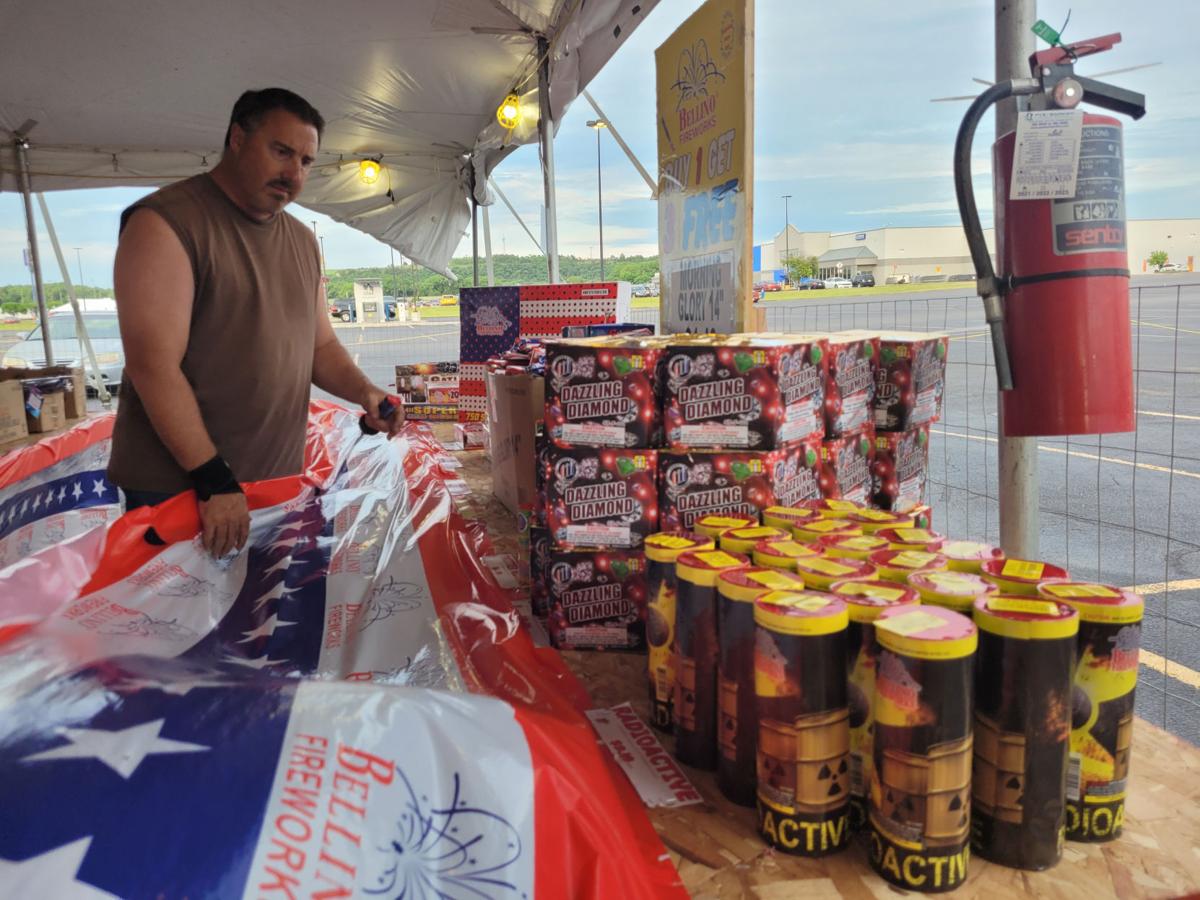 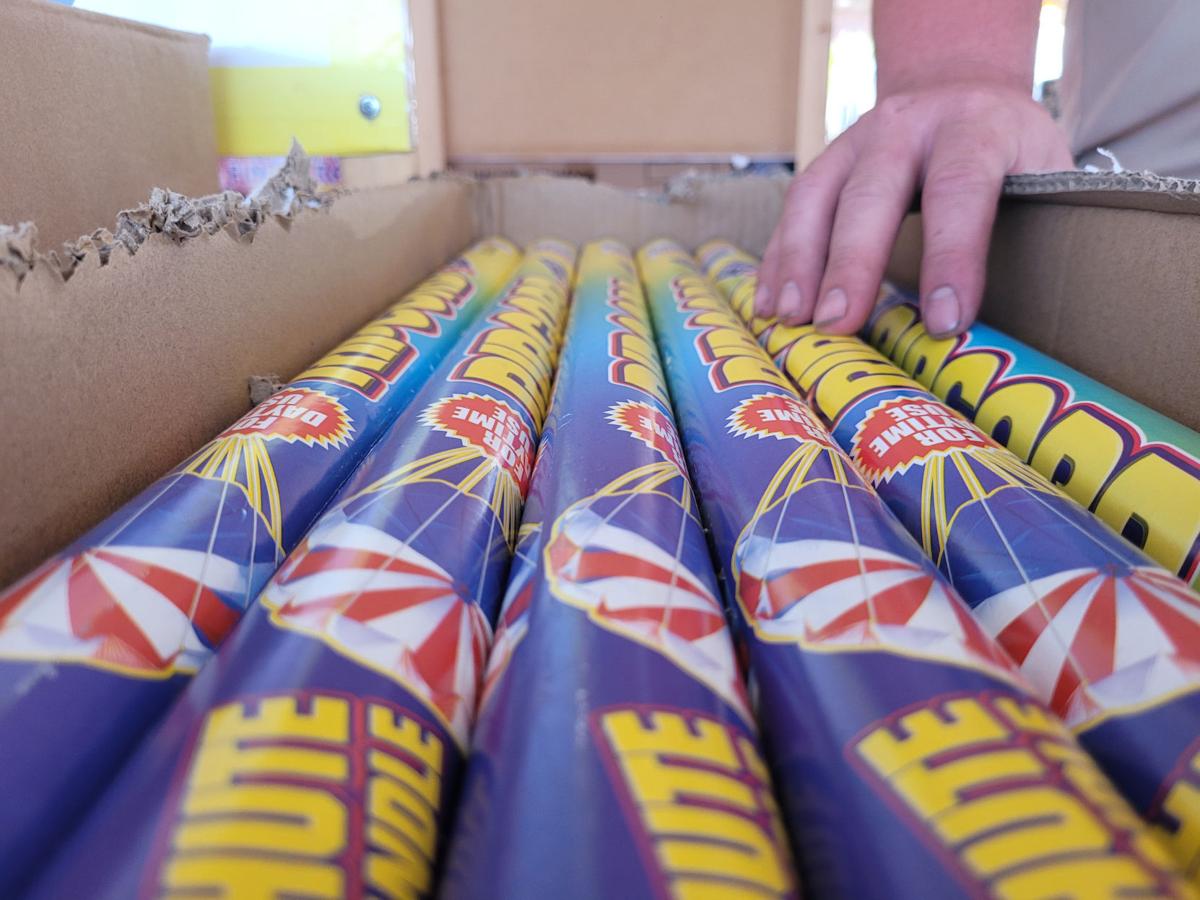 Jake Vanderford rests his hand on some of his stock at his fireworks tent in the parking lot of Hibbett Sports in Junction City.

Jake Vanderford rests his hand on some of his stock at his fireworks tent in the parking lot of Hibbett Sports in Junction City.

Fireworks sales have started in Junction City as of Sunday.

Because Sundown Salute’s annual fireworks show has been canceled once again this year, many people will likely want to put on shows of their own at home.

Jake Vanderford of Bellino’s fireworks, which has a tent located in the parking lot of Hibbett Sports in Junction City, cautions people to be careful when using fireworks at home.

He encouraged parents with young children to take precautions when using fireworks with children around. Young children should not be allowed to play with fireworks or light fireworks unattended. Adult supervision — from sober adults — is necessary, Vanderford said.

Anyone can be injured by fireworks if proper care is not taken when using them. Injuries to the head and hands are common and a large percentage of those injuries happen to people aged 10 to 44, Vanderford said.

Mortar shells and roman candles can tip over and injure people.

“In my life, I’ve seen some things where things tipped over and hit younger people in the chest,” Vanderford said, accidents resulting in bruising and burns. “It’s something that people need to take very seriously when young people and safety are involved, because safety is a very big thing. I don’t care who you are or what you do, everybody wants to go home with everything they showed up with.”

He also encourages people to avoid smoking in the presence of fireworks.

“It’s very important for people to kind of just take extra time and do it right so nobody gets hurt,” he said.

Vanderford said supply would likely prove a major concern this year, as it did last year.

“Supply’s kind of a big deal with COVID,” he said. “It was last year and it is also this year. A lot of the wholesale people like TNT are not trying to wholesale to mom and pops, which is hurting them.”

According to Vanderford, people who have worked with TNT and similar brands for a decade or more have sometimes been unable to receive their usual supply of fireworks to sell this year, meaning they’re out that income unless they can come up with their own supply. He said some of these sellers have resorted to traveling out of state to buy fireworks from big box stores in the hopes of bringing it back and selling it.

“They bring it back and they’re still trying to make that profit margin that they’re used to,” Vanderford said. “So their prices kind of go up, which could be problematic.”

He has not needed to do that himself, but that does not mean his fireworks stand has not suffered due to the pandemic.

The prices of shipping from China, where many fireworks are produced, have doubled, he said.

“The price is going up and demand is very high,” he said.

Last year, Vanderford said he sold out of fireworks in part because Sundown Salute was canceled.

With the annual Independence Day celebration diminished this year and the fireworks display canceled, he expects the same thing to happen this year.

“I am not going to be packing any of this stuff back into that trailer and there’s one good reason for it,” Vanderford said. “It is all going to be gone … I’m hoping maybe I can spend the Fourth of July shooting fireworks with my family because we’re not going to have to work because there won’t be anything to sell.”

Even something as simple as a party popper which can be purchased legally all year long in Kansas has become hard to find, according to Vanderford. This year, he said he didn’t receive any of his usual supply of party poppers.

“There’s a container ship of them somewhere in the world right now full of them that never showed up yet,” Vanderford said. “Just little things. That’s something that — like I said — you can get those at Dollar Tree everyday of the year, all year in every city in Kansas. So supply is a big deal right now.”

Even Sunday — the first day fireworks could legally be sold to members of the public in Junction City — his fireworks stand was busy. He opened for business shortly after 8 a.m., after passing his fire inspection.