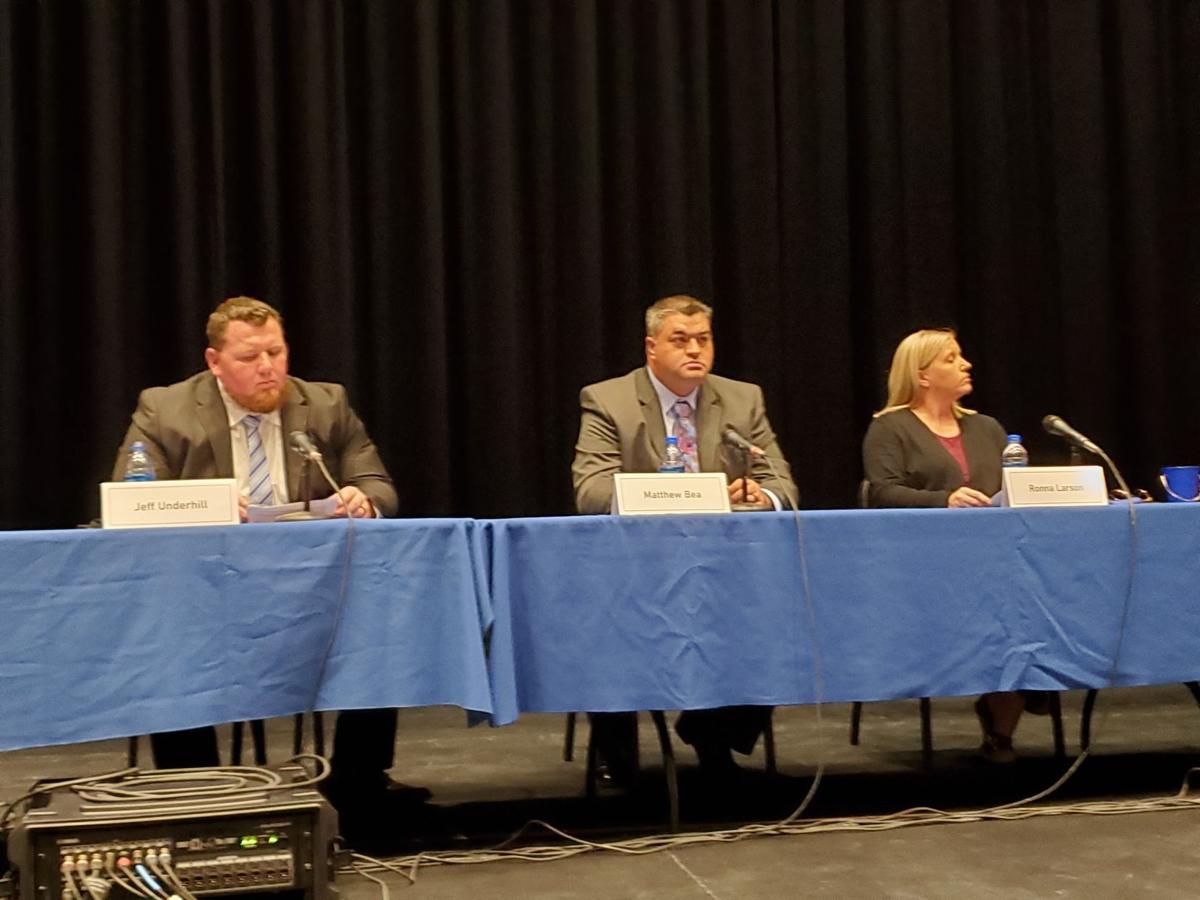 The Junction City Chamber of Commerce hosted a candidate forum Thursday evening in the auditorium of the new Junction City High School.

Candidates for the USD 475 school board and the city commission all got a chance to voice their opinions on key issues leading up to November’s election.

In the city commission race, current commissioners Matthew Bea, Ronna Larson and Jeff Underhill were all running for reelection. The top two vote getters will start new four-year terms while the commissioner in third will stay on the commission, but will only have a three-year term .

The commissioners spoke on a variety of topics including city funding of Geary Community Hospital, property taxes, Land Bank lots and expansion of the Parks and Recreation Department and were in agreement with each other throughout on each issue.

All three especially shouted out new Parks and Recreation director Nic Youngers for his hard work and vision since he’s been hired and Underhill stated a desire to eventually hire a specific recreation director to allow Youngers to focus specifically on parks.

“We have groups like Junction City Junior Baseball, Danger FC, Jays Football and even the YMCA sports who have all done a great job over the last 25, 30, 40, 50 years but they’re filling a void that, really the city should be handling,” Underhill said. “We should be making sure that those programs are constantly funded, operated and given to the community at a very high level.”

In the school board forum, opinions were slightly more differing.

The eight candidates agreed on issues like ways to improve student achievement and boost staff morale but found some divisions on some of the stickier issues.

Six of the eight candidates agree that a mask mandate should continue in USD 475 schools while two, Bliss and Hatcher, expressed some hesitancy.

“My position is I don’t believe we can mandate and mitigate forever,” Hatcher said. “I think our parents love their kids more than anyone else and I’d advocate for freedom in that and letting the choice to wear a mask to be made at home.”

Bliss agreed that he felt the choice of wearing a mask should be left to the parents.

Several expressed a desire to re-allow outside volunteers to the school which have been off-limits since the start of the pandemic and stated that doing that would help with teacher stress.

There was also some disagreement when it came to the issue of critical race theory. The theory is a body of legal scholarship that examines the intersection of race and US law and has come under fire politically in the past year.

Multiple candidates saw this a non-issue, stating that there isn’t critical race theory in the USD 475 curriculum nor is it part of the standards of the Kansas Department of Education but both Hatcher and Bliss expressed concern that the theory could still be taught to kids.

“Parents need to be aware of what their children are being taught,” Bliss said. “If there’s a chance that something like (Critical Race Theory) is being taught in our schools, parents should bring evidence of that to the school board.”

Holloway spoke in favor of unity and listening to one another in regards to the issue.

“We have a great community,” Holloway said. “I think if we all begin to work together instead of against each other, it will be better for all of us. I do believe that we all want to be connected. We all want to be valued and feel like we’re being heard and I just feel like everybody deserves a place at the table and everybody has a voice that deserves to be heard and that’s a discussion that needs to continue in regards to Critical Race Theory.”

The candidates ended the night by tackling teacher retention, an issue for both USD 475 and the state of Kansas as a whole.

“When you lose some of those teachers you forget that you’re also losing a family in the community,” Hudson said. “And I’ve seen that time and again the last couple of years. I think we’ve also lost some core people administratively across the district so you kind of lose your way. I do think the board addressing this will be huge help. It’s recognizing that there is a concern, recognizing that relationships have to be rebuilt and recognizing that people want to be heard.”

The election will take place on November 2.