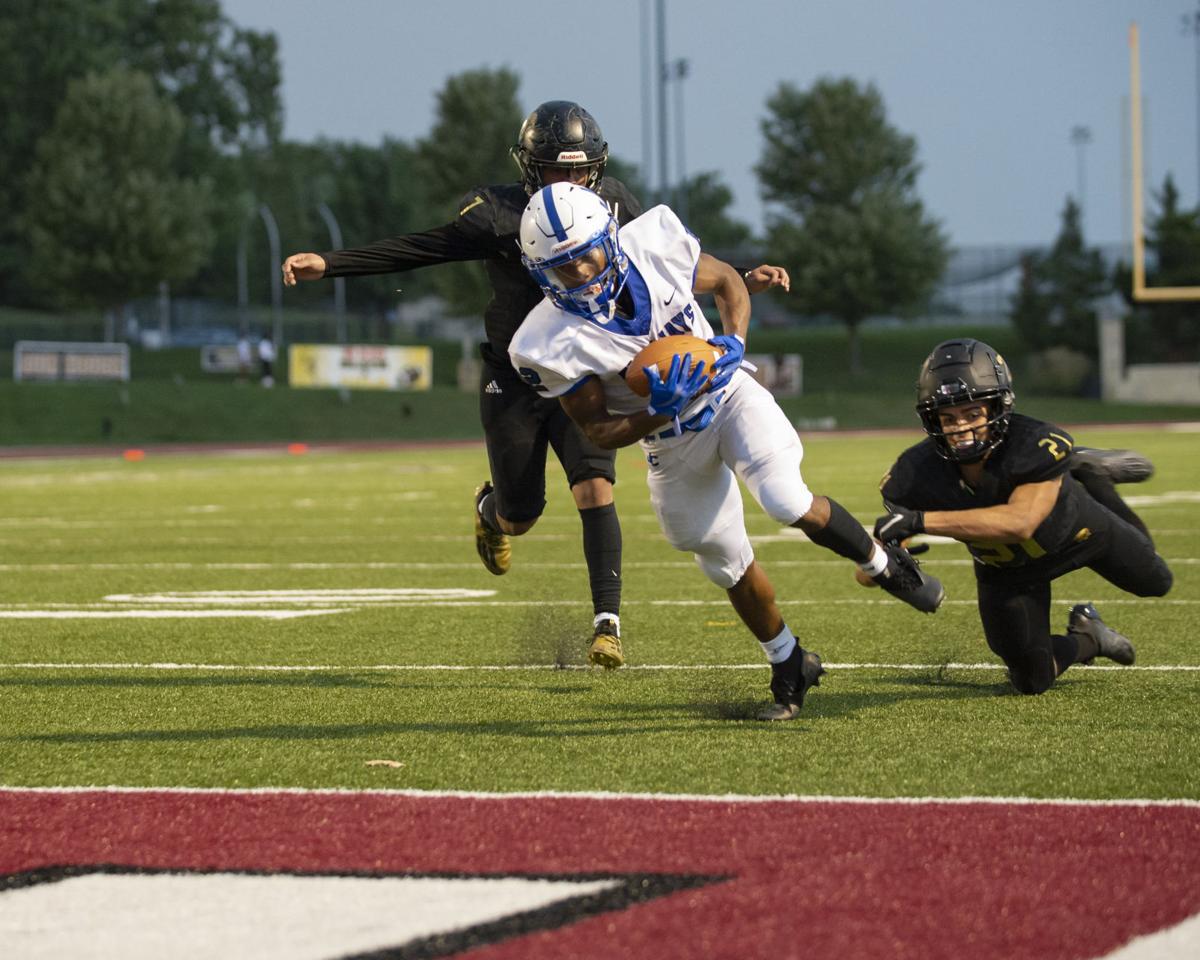 Junction City’s TJ Jones (center) runs for a touchdown during Thursday evening’s game against Topeka High at Hummer Sports Park in Topeka. Lightning ended the contest at halftime, which gave the Blue Jays a 34-0 win. 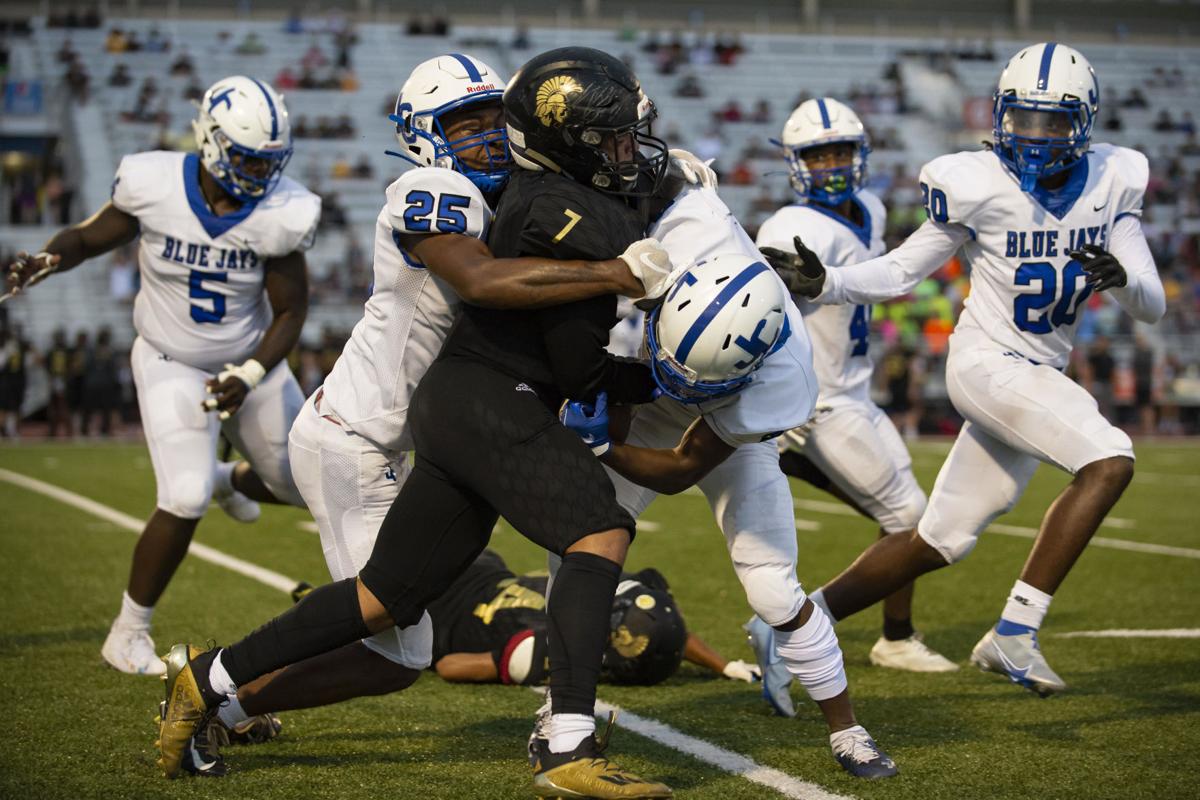 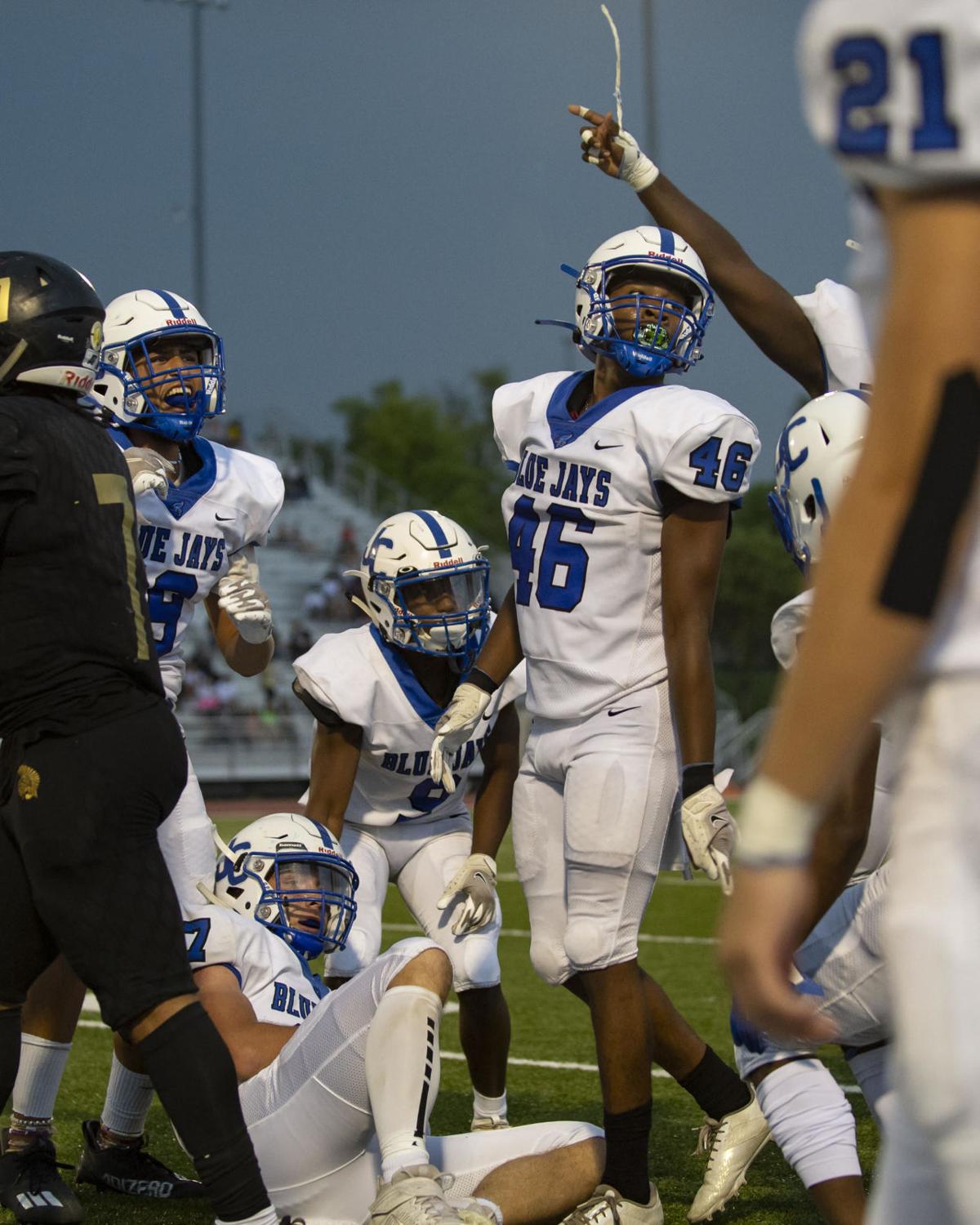 Junction City picks up a fumble Thursday evening at Hummer Sports Park in Topeka during the Blue Jays season-opening win over Topeka High. 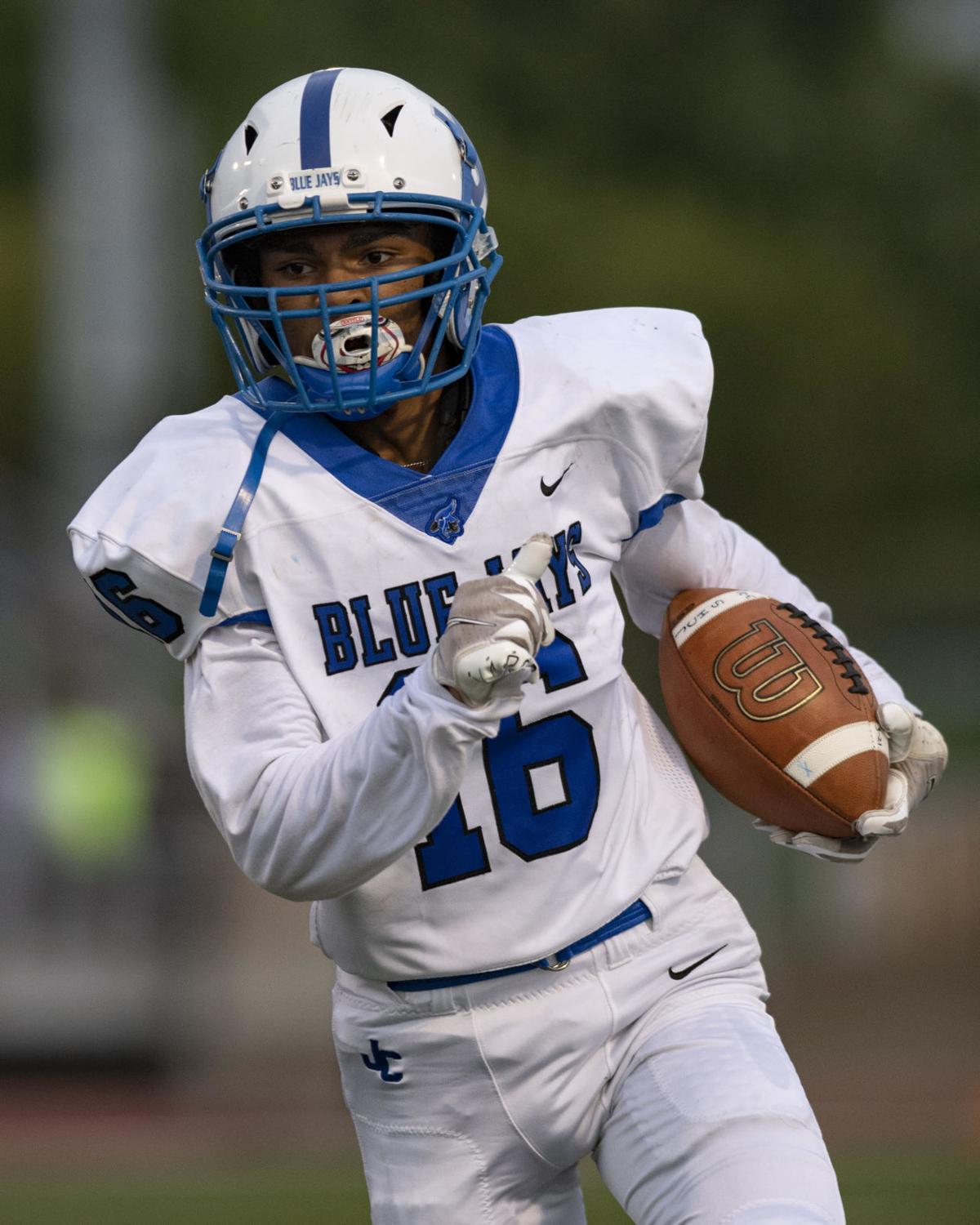 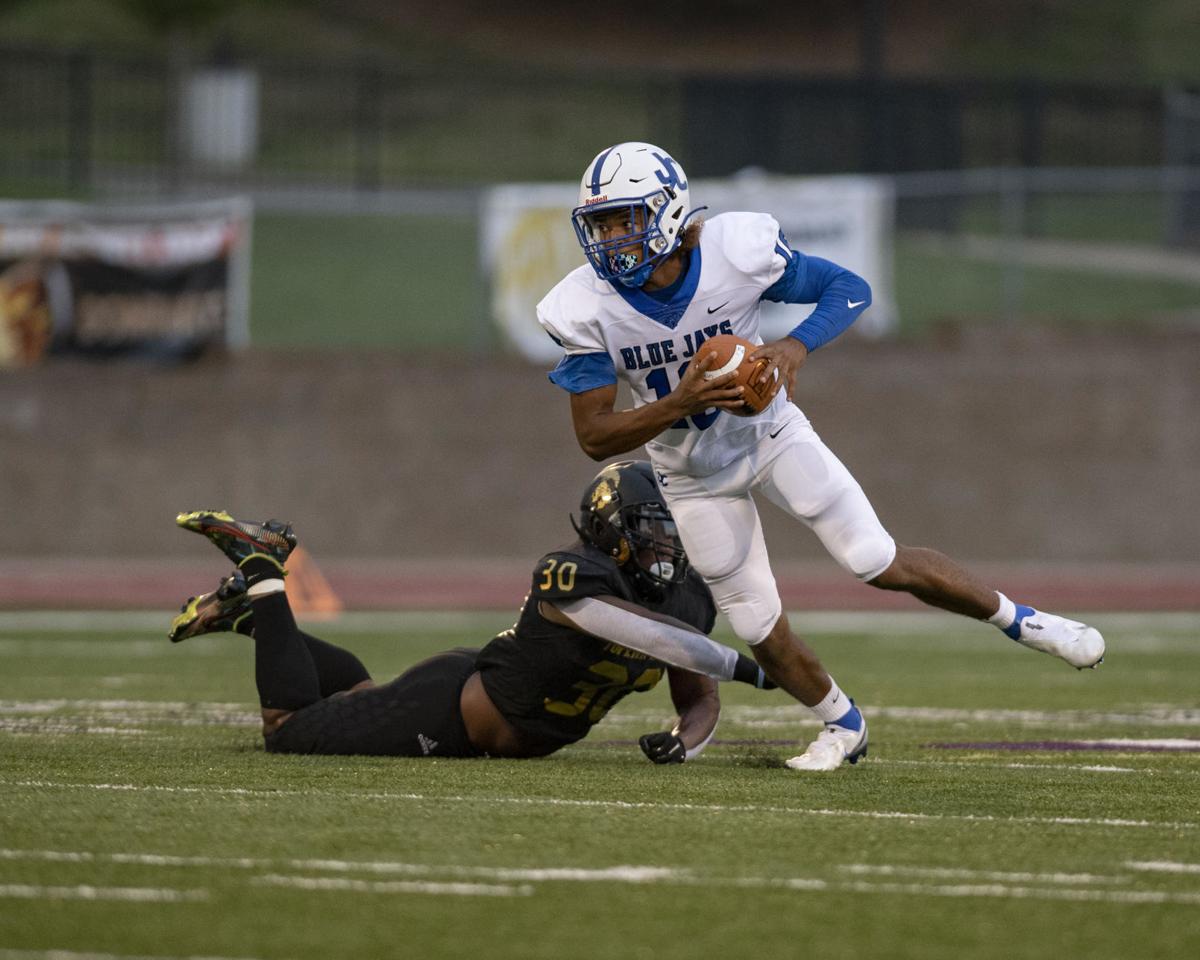 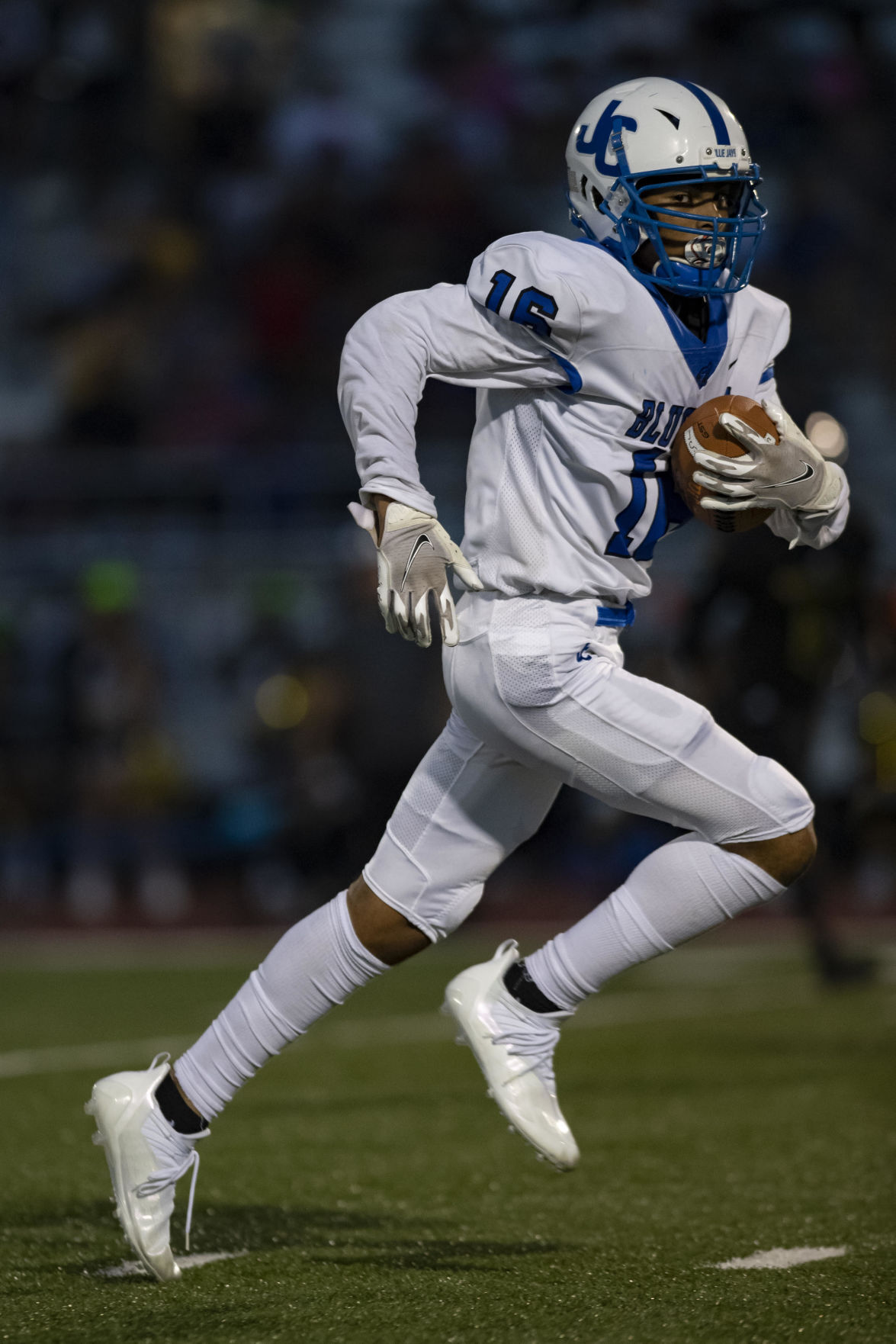 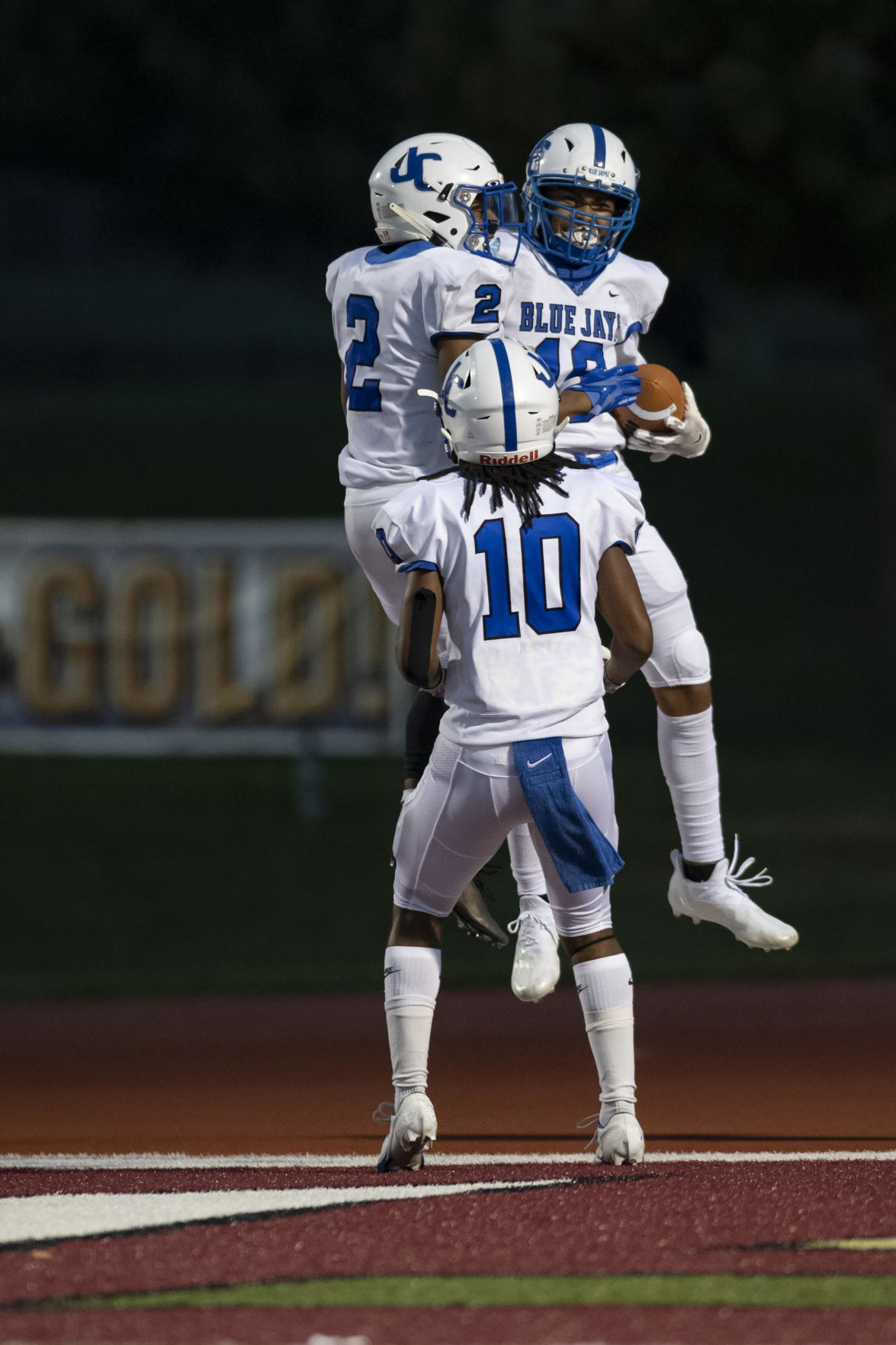 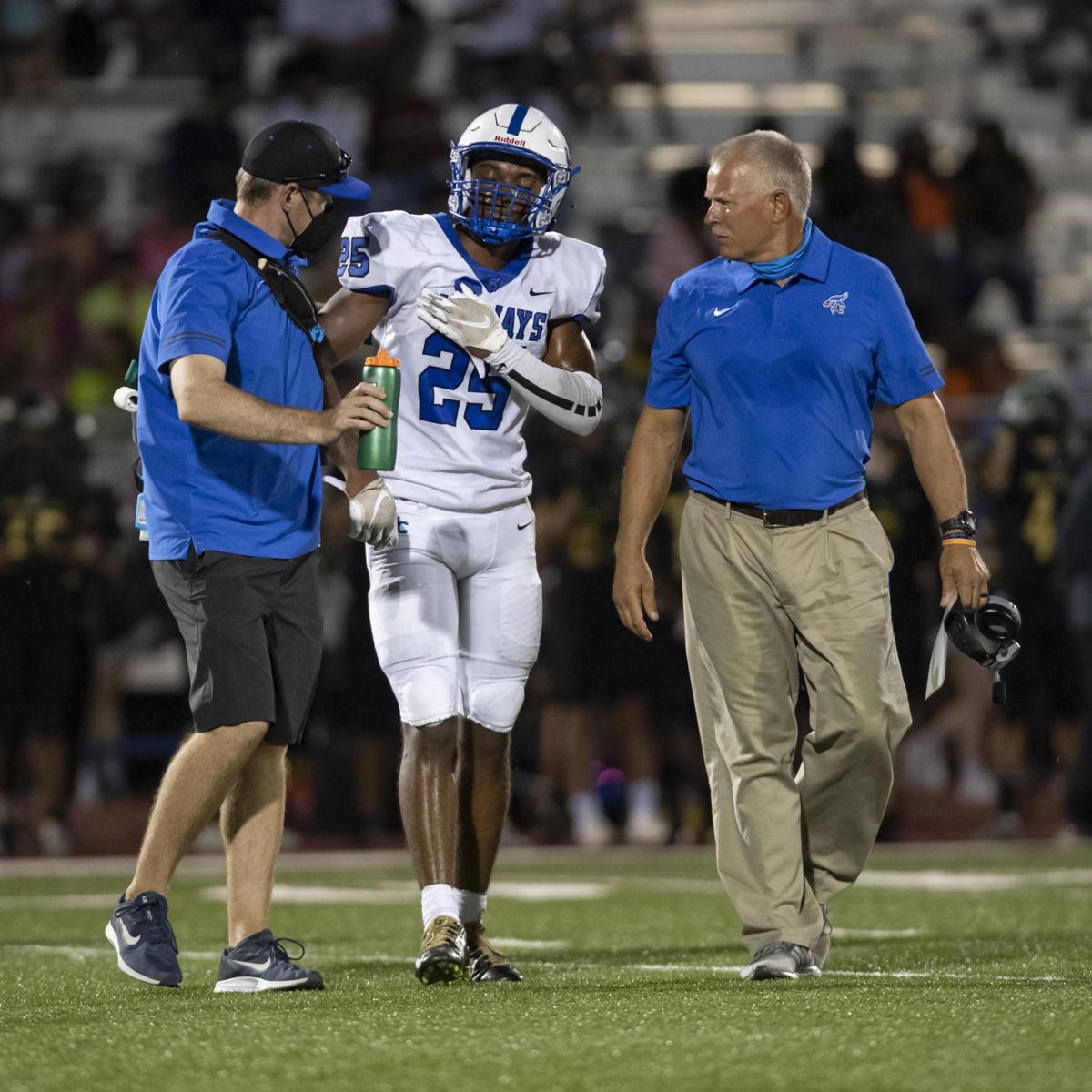 Chaz Ruffin walks off the field with head coach Randall Zimmerman, right, after an injury Thursday evening at Hummer Sports Park in Topeka.

Junction City’s TJ Jones (center) runs for a touchdown during Thursday evening’s game against Topeka High at Hummer Sports Park in Topeka. Lightning ended the contest at halftime, which gave the Blue Jays a 34-0 win.

Junction City picks up a fumble Thursday evening at Hummer Sports Park in Topeka during the Blue Jays season-opening win over Topeka High.

Chaz Ruffin walks off the field with head coach Randall Zimmerman, right, after an injury Thursday evening at Hummer Sports Park in Topeka.

TOPEKA — Lightning cut short Junction City’s football opener at Topeka High, but the Blue Jays got a few strikes of their own in before it ended at the half.

The stands cleared as a precautionary measure while both teams sat in the locker rooms at halftime. After a delay of approximately 20 minutes, the game was called, with Junction City winning 34-0.

“I was very pleased with the first half, but I was really hoping we would get the whole game in,” Junction City head coach Randall Zimmerman said. “We’ve got a lot of kids who have earned the right to get on the field tonight who weren’t able to. You want to play a full game every night, because these kids work so hard. That’s their reward: to play in front of their parents and in front of the fans.”

Junior end Tyree Holloway started off the new campaign with a 16-yard dash around the left side of the Blue Jay line and into the end zone.

That score opened the floodgates.

The Blue Jay onslaught continued with four more touchdowns before halftime. Senior quarterback David Rowell, in his first start replacing all-stater Andrew Khoury, contributed three scores in the first half. Rowell passed to Holloway for a 16-yard touchdown, to TJ Jones for a 14-yard score, and ran another from the 1-yard line.

Xavion Felton accounted for the other Junction City (1-0) score on a three-yard carry.

A converted defensive back, Rowell spent most of last year on the sideline, learning the quarterback position and biding his time.

“He was willing to sit behind Khoury last year to learn the offense,” Zimmerman said. “He’s very unselfish. He’s just a really good kid. I thought he played great. He was nervous early, but he slowed things down. He’ll keep getting better.”

Rowell said he didn’t put too much pressure on himself given the task of taking over for Khoury.

“I had to just be myself and not be nervous,” Rowell said. “I had to just go out and show what I’ve got and give my team the best looks.

“It went well. I was proud. The offensive line, the receivers, everyone was just doing their thing, and it was great.”

The Blue Jays had waited nine months to wash away the bad taste of a 62-27 loss to Derby in the semifinals of last year’s Class 6A state playoffs. There were numerous holes to fill from that 9-2 team. Zimmerman said that on top to losses to graduation, the Blue Jays had several underclassmen move away since last season. He said only a couple of starters returned on offense and defense.

“Some of the things that you take for granted, we’re having to teach those things,” Zimmerman said. “We can’t take anything for granted.”

The Blue Jay defense surrendered 111 yards to Topeka (0-1) in the half, but 58 of those came on one long run when the victory was well in hand. Junction City’s offense, meanwhile, gained 186 yards on the ground and 134 in the air.

“I’m very pleased with the way our kids were able to come out, settle in against a very good team and play well,” Zimmerman said.

The Blue Jays have eight days to prepare for a visit to Manhattan next week. The Indians travel to Garden City Friday night.

“That’s a huge game. They’re always so good,” Zimmerman said. “We know that we have our hands full.”