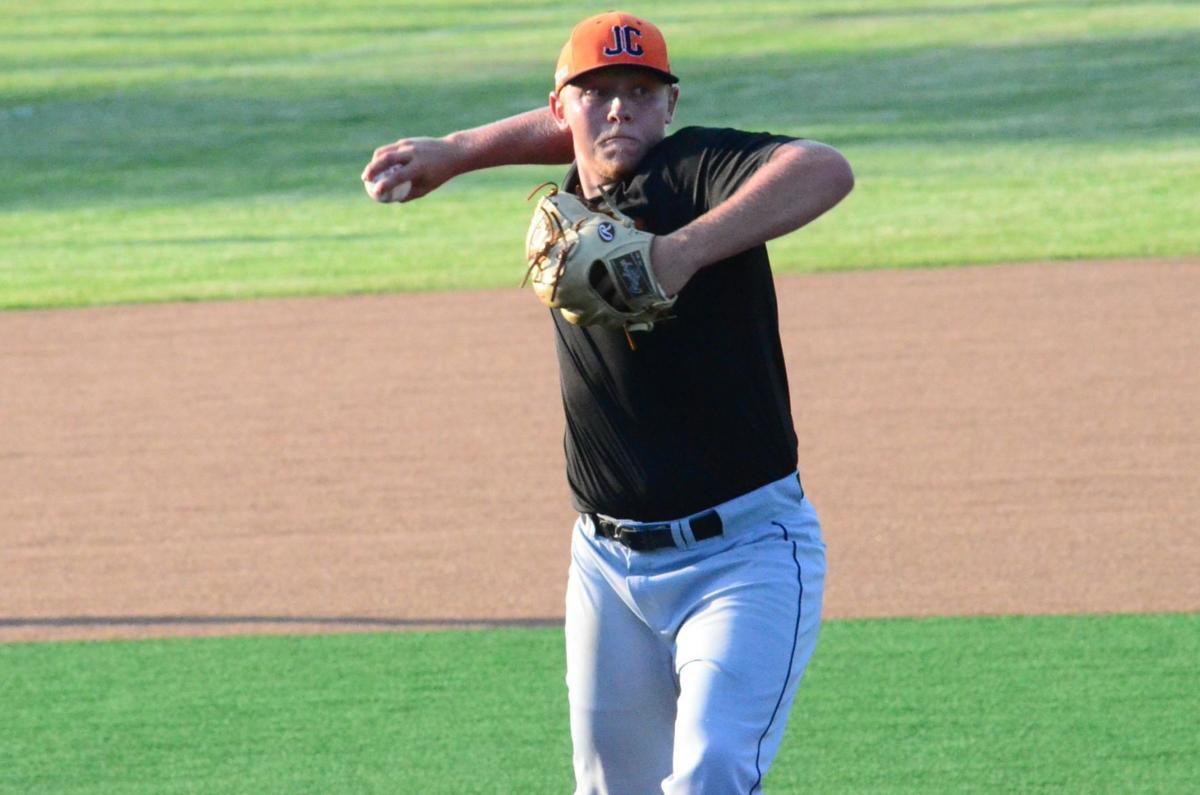 Brigade starter Zac Ebert throws toward first base during their 14-4 win over Baldwin City at Rathert Stadium on Saturday. 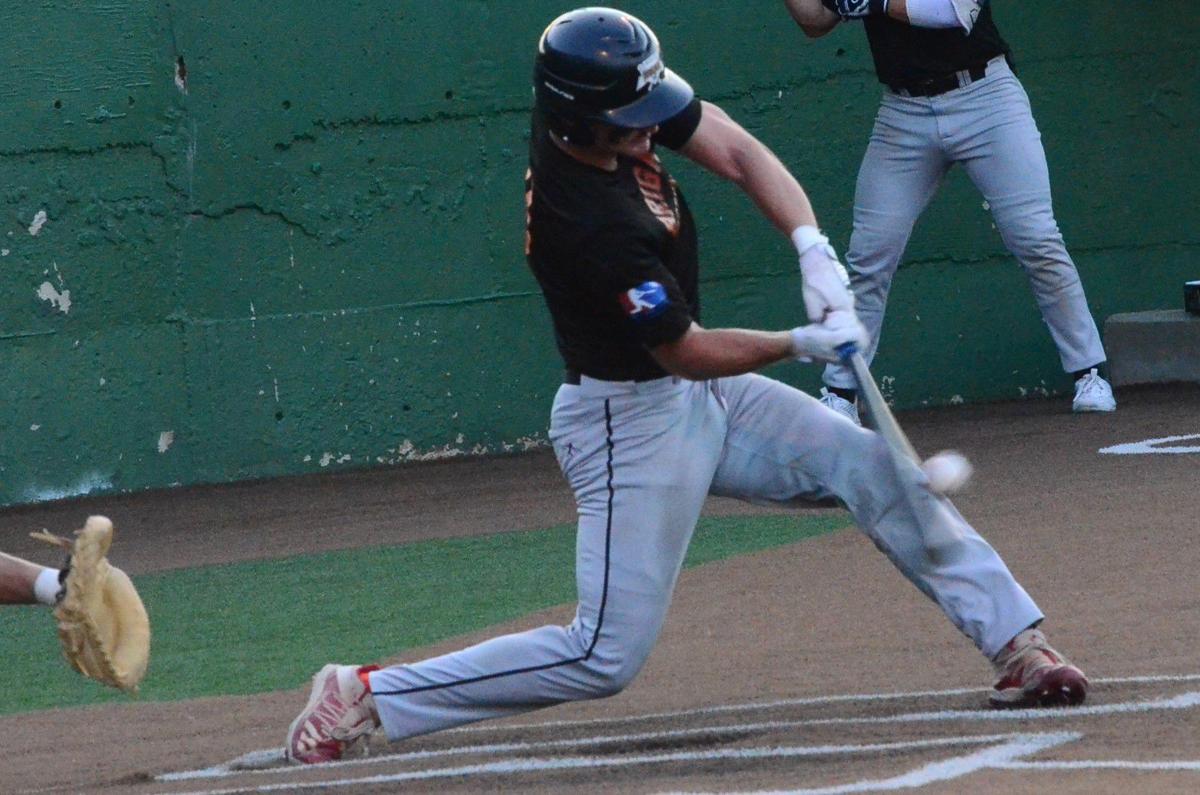 Grant Howard swings at a pitch during the Brigade’s win over Baldwin City at Rathert Stadium on Saturday. 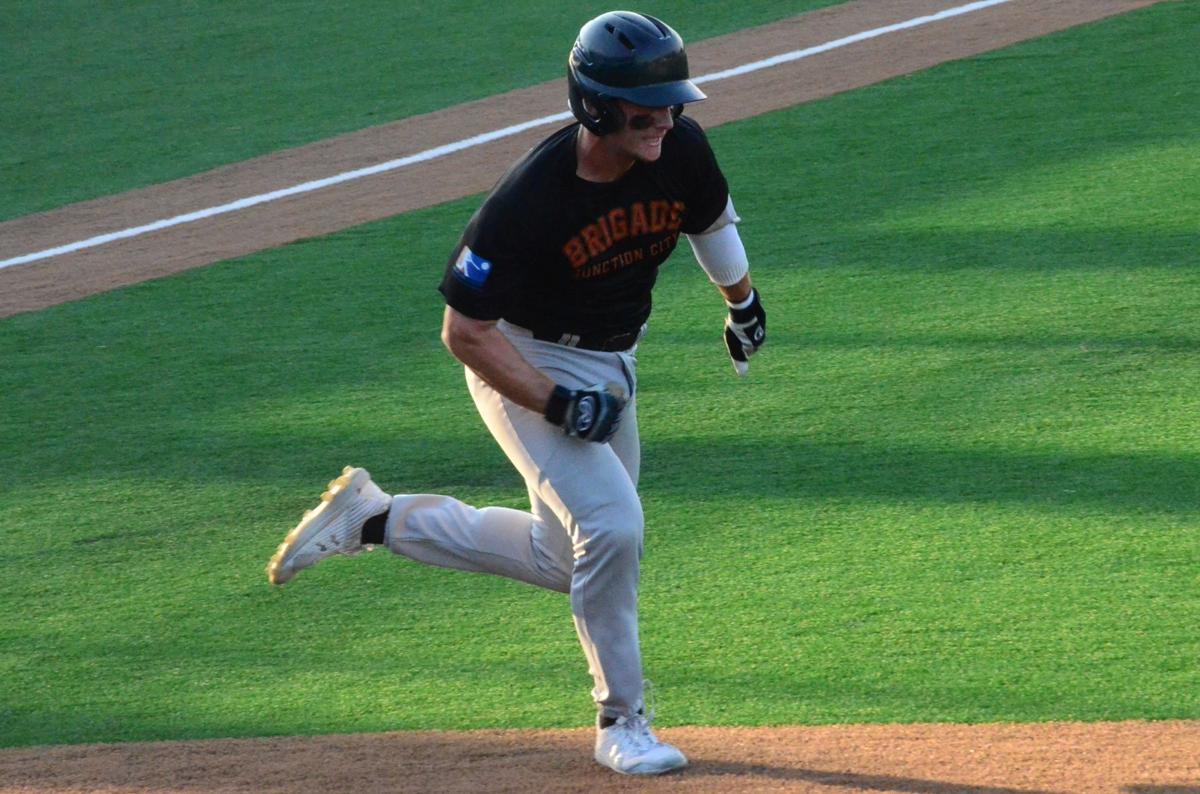 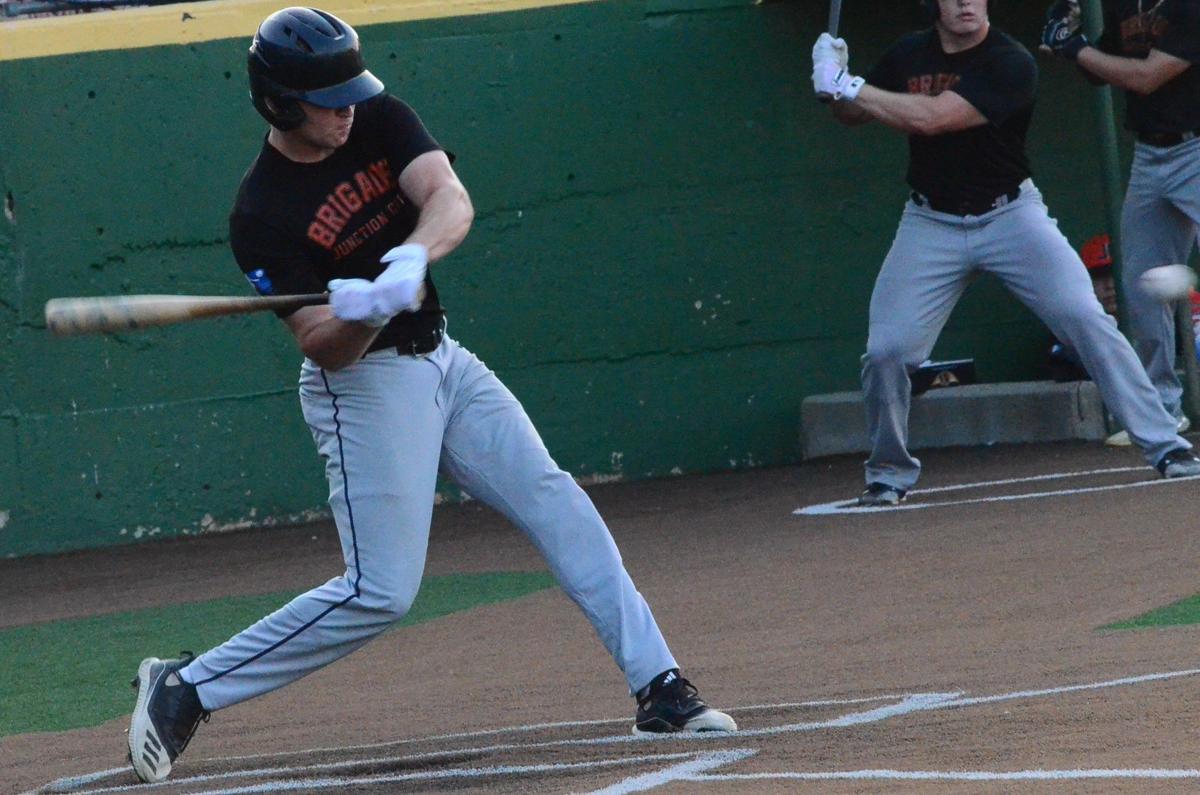 Designated hitter Dalton Nelson swings at a pitch during the Brigade’s win over Baldwin City on Saturday at Rathert Stadium.

Brigade starter Zac Ebert throws toward first base during their 14-4 win over Baldwin City at Rathert Stadium on Saturday.

Grant Howard swings at a pitch during the Brigade’s win over Baldwin City at Rathert Stadium on Saturday.

Designated hitter Dalton Nelson swings at a pitch during the Brigade’s win over Baldwin City on Saturday at Rathert Stadium.

After losing the series opener versus Baldwin City, the Junction City Brigade battled their way back to win the next two games and clinch a spot in the Cowdin Cup Championship Series versus the Midwest A’s.

It didn’t come easy though, Sunday’s game three was an instant classic, a 10-inning knuckled-biter that ended with the Brigade’s Garrett Redden sending the Baldwin City Blues home with a walk-off two-run homer.

Casey Steward got the start and was not as solid as he has been in previous starts, allowing five runs (three earned) on five hits and two walks with four strikeouts over six innings.

However, relievers Carl Aikman and Cade Phelps were studs. Aikman went the next three allowing just two walks and a hit while striking out two and Phelps came in in the top of the 10th and allowed a hit and walk but got out unscathed.

Dalton Nelson, Gus Freeman and Dylan Werries each had three hits and Thomas Beiswagner had two but it was Garret Redden who was 0-4 when he stepped up to the plate with two outs and sent a ball over the right field fence to end the game.

Now, the Brigade find themselves back in the Cowdin Cup Championship Series versus the Midwest A’s who are looking to repeat as champions.

The Brigade have won four Cowdin Cups including two of the three while no other team in the league has won more than one.

From start to finish the Brigade knew they wanted to play a game three on Sunday and achieved just that, winning game two 13-3 in eight innings.

Zac Ebert got the start for the Brigade and struggled a little with his command in the first. But in the second, Ebert found his feet quickly striking out the side.

“At the beginning of the game I felt like my stuff wasn’t working the way I wanted it to… But once I found my groove, I knew I was in good shape, and they weren’t going to touch me,” Ebert said.

On the offensive side, the Brigade struggled during the first time through the order, only managing two hits in the first three innings. But in the fourth inning, Junction City busted the door open.

Dalton Nelson led-off the inning with a single and, after stealing second, Jace Essig came to the plate with one out. On an 0-1 pitch Essig ripped a ball over the left field fence to give the Brigade the lead.

“First pitch skipped in, but I swung at it,” Essig said. “Next pitch I just gathered myself and he threw a pitch right down the middle, and I was like thank you so much.” Essig said.

But the runs did not stop there in the fourth.

Grant Howard immediately doubled into the left-field gap and Jace Steart followed with a walk. The Brigade, in usual fashion, stole third base giving them runners on the corners with one out. A couple pitches later Stewart ran for second. Oddly enough, the catcher decided to try to throw out Stewart even with the speedy Howard on third. Unfortunately for the Blues, Stewart would be safe at second and Howard easily made it home, plating the Brigade’s third and final run of the inning.

The Blues did answer with a run of their own in the fourth, scoring Hunter Peacock on a Justin Carinci double but Ebert did manage the inning well, only giving up the one run while facing six batters in the inning.

Ebert pitched lights out for the rest of his night, even managing two more runners in the sixth and allowing neither to score. Heading into the seventh, Ebert had 80 pitches under his belt so normally that would’ve meant another solid night from Ebert. But in the playoffs, it’s a different story.

“I went up to him (Ebert) and asked how do you feel? He said he felt good, and I was like you’re at 80 pitches so if you go back out, I need a quick one. He said, “No problem. I’ll give you one more”.” Coach Brandon Bachar said..

And a quick inning was exactly what Coach Bachar got from Ebert. After allowing the first batter to reach on a single, Ebert finished the next three batters off in 11 pitches striking out two more giving him nine strikeouts on the night.

In the bottom of the seventh, the Brigade blew the hinges off the game adding six insurance runs. Price Allman began the inning with a triple that really pumped up the Brigade bench.

“Price had one of the biggest at-bats of the night,” Bachar said. “He had two strikes on him, and he fouled off a pitch or two and then he smacked a triple into the gap. It was awesome and really got the inning rolling for us.”

Several more Brigade players had similar luck as six runs crossed in the bottom of the seventh to push Junction City’s lead to eight heading into the eighth.

Zach Philbin relieved Ebert in the eighth and began with a 9-1 lead. Philbin did struggle with his control allowing two runs to score in his two-thirds of an inning of work. Carl Aikman came in with two outs and a runner on first. Aikman immediately forced Blues batter Graham to pop-out to end the eighth for the Blues offense.

In the bottom of the eighth it looked as if the Blues threw in the towel as centerfielder Quinton Carlberg relieved in the eighth for the Blues. The Brigade earned four walks within the first five batters, giving Kade Graff the bases loaded with the winning run on first.

Graff then sent a line drive down the third base line, scoring two, and bringing up Gus Freeman to try to end the game. On the first pitch Freeman sent a chopper over the shortstop’s head to end the game in walk-off fashion.

The Brigade lost the series open to Baldwin City 6-4 on the road.

Offense was hard to come by as Price Allman was the lone multi-hit Brigade player of the game with two.