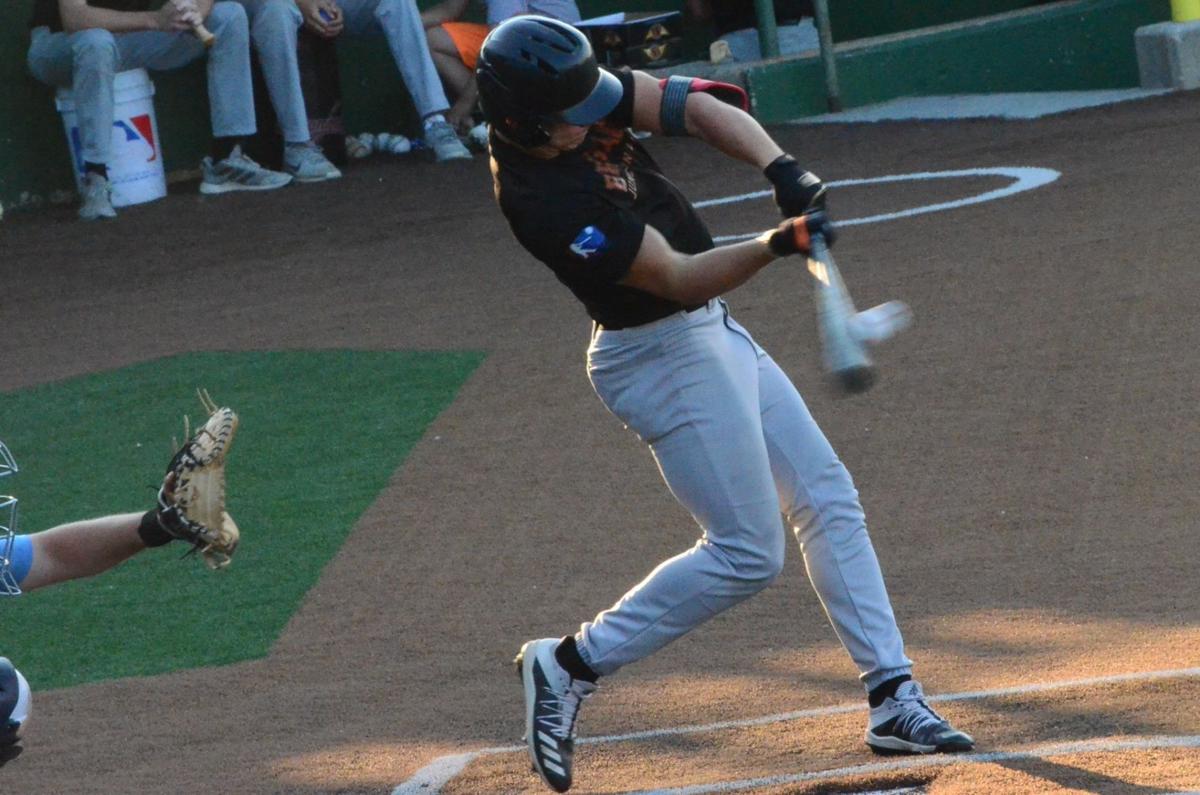 Thomas Beiswagner swings at a pitch during the Brigade’s win over Baldwin City on Saturday. 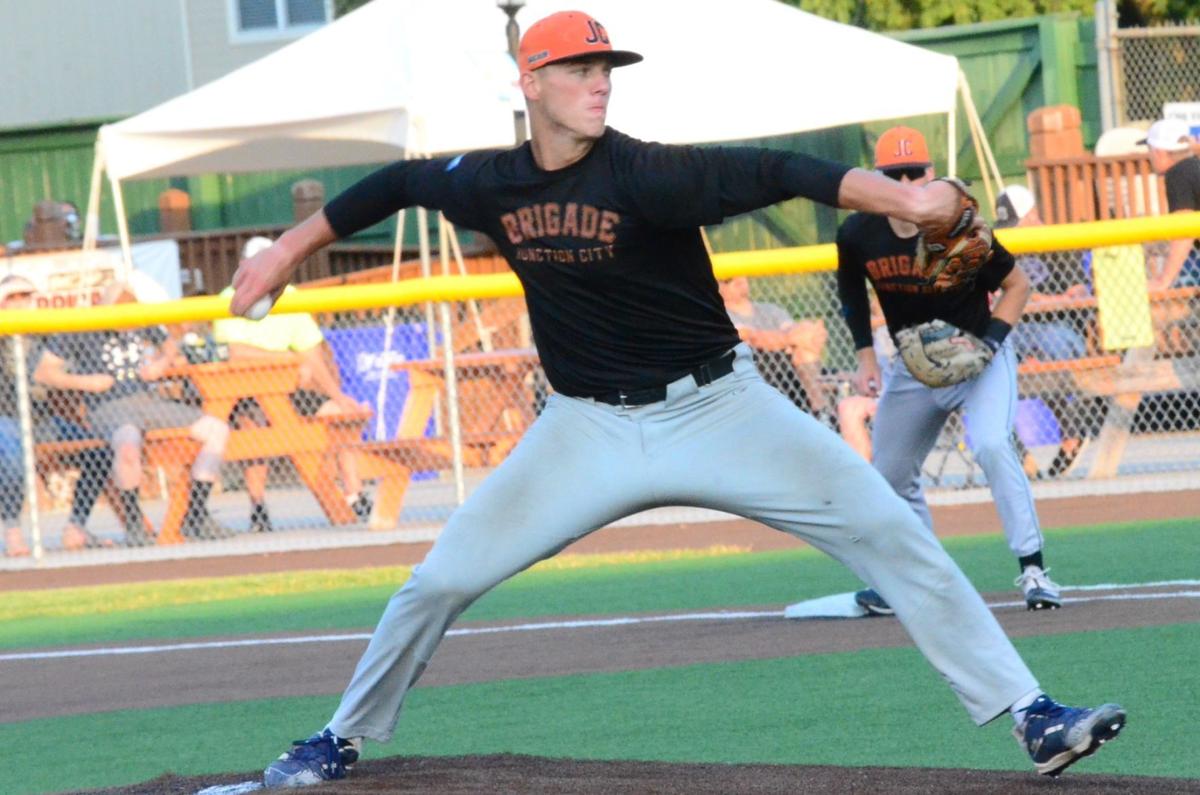 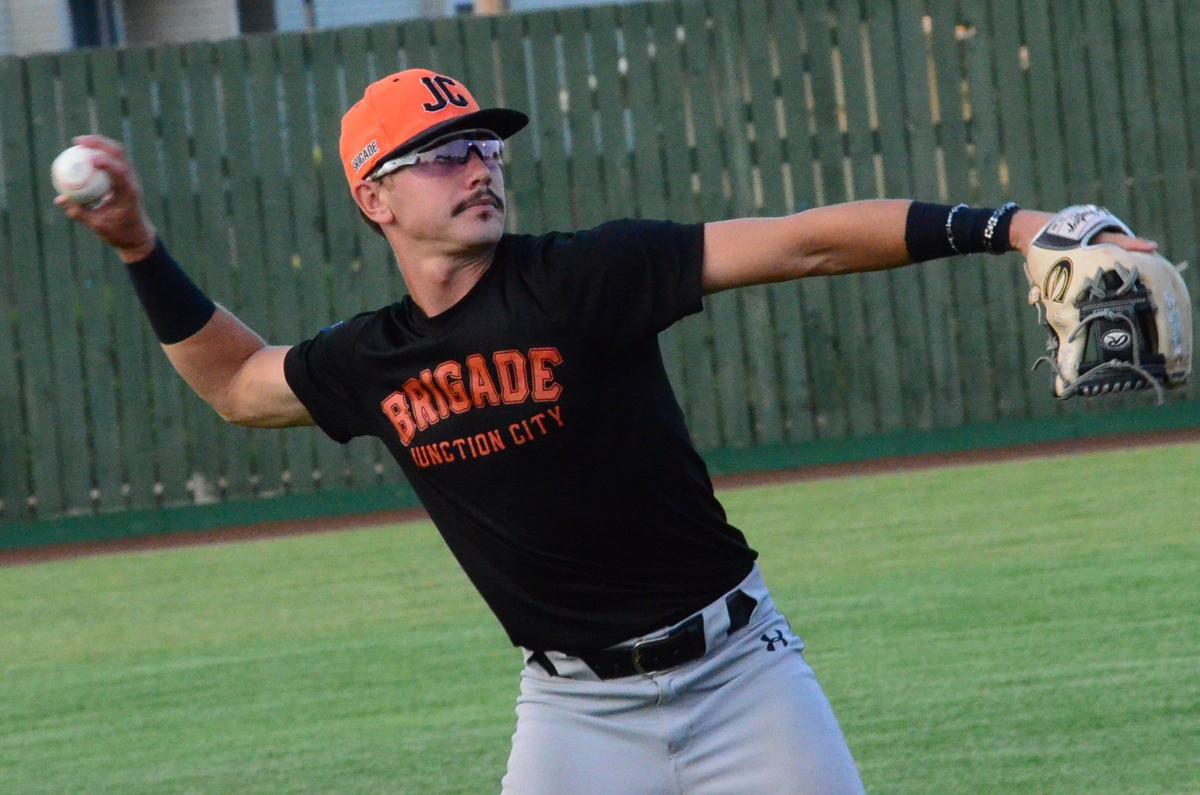 Kade Graff throws in a ball from the outfield during the Brigade’s win over Baldwin City on Saturday at Rathert Field. 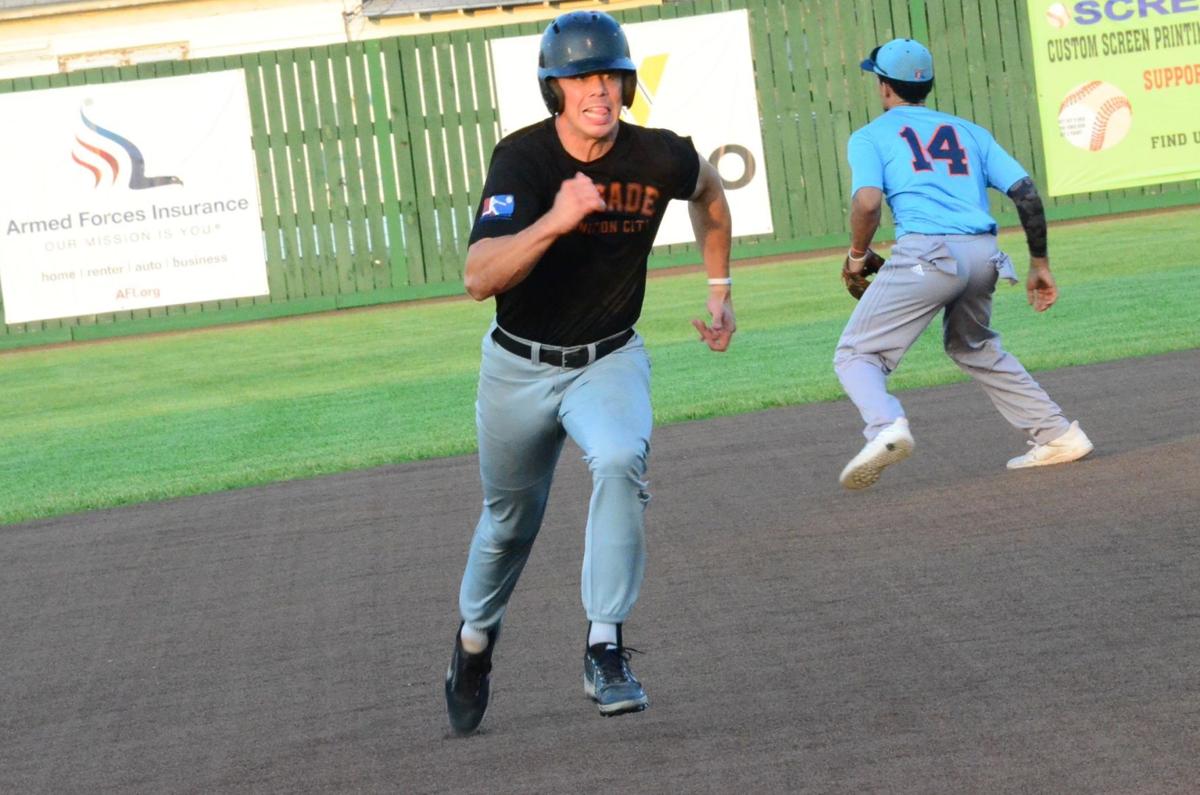 Price Allman runs toward third base during the Brigade’s win over Baldwin City at Rathert Field on Saturday.

Thomas Beiswagner swings at a pitch during the Brigade’s win over Baldwin City on Saturday.

Kade Graff throws in a ball from the outfield during the Brigade’s win over Baldwin City on Saturday at Rathert Field.

Price Allman runs toward third base during the Brigade’s win over Baldwin City at Rathert Field on Saturday.

The Junction City Brigade players came into Saturday night’s final game of their series with a sweep on their mind. After strong 10-6 and 7-2 wins over Baldwin City on Thursday and Friday, the motivation behind closing the series out had just a little more to it.

“We knew going into this series that we were in third place and we really want to finish in first so we knew we needed to win all three games so I think we went in with kind of a bulldog-mentality and we took all three games like they were ours,” Price Allman said.

And took them they did. The 17-8 Brigade rebounded from a five-run deficit in the first inning to win 17-7 in eight innings, vaulting them into the first-place tie with the Midwest A’s.

“Offensively we were awesome tonight,” head coach Brandon Bachar said. “And I also think that, as a team, our attitude in general has been great. We came out and gave up five runs in the first inning and nobody really blinked an eye. We still expected to win.”

Casey Steward got the start and stumbled out of the gate, allowing six Blues players to reach base before the waters were calmed by a key double-play that kept things from truly getting out of hand.

“You never want to go out and give up five runs on six hits in the first inning but it’s baseball and it happens so you just have to go out there and find a rhythm and a place in your mind to go and just stick through it,” Steward said.

Following the struggles of the opening inning, Steward settled in, putting up zeros in the second, third and fourth innings before giving up another two runs in the top of the sixth.

Meanwhile, offensively, after a quiet bottom of the first, the potent Brigade offense got rolling, putting up crooked numbers in the second, third and fourth innings. Junction City grabbed the lead from Baldwin in the third when Garret Redden doubled home Allman and Gus Freeman to push the Brigade ahead 6-5.

Junction City added five more runs in the bottom of the fourth and from there, there was no looking back.

After Baldwin scored their final two runs in the fifth, the Brigade added one in the sixth, three in the seventh and finally, two in the eighth off a Jace Stewart groundout and Baldwin City error that scored Jace Essig from third to put the game away an inning early.

Essig was mighty at the plate, grabbing four hits to lead his teammates. Freeman had three and Thomas Beiswagner had two.

The series stands in stark contrast to the season-opening series versus the Blues where the Brigade dropped two of the three games. The dominant nature of the sweep shows the growth and the chemistry that Junction City has developed over the season.

“Those were our first few games and we just weren’t clicking yet,” Allman said. “We had a few guys that didn’t get an opportunity to play in the spring so we were a little rusty and once we started to get AB’s things started to click and now you can tell that we’re on fire.”

“We’re super close right now,” Steward said. “Everyone’s having fun and just being guys. We come in and mess around with each other and then take the baseball seriously,”

The Brigade currently sit tied for first but a tie-breaker would give the Midwest A’s the top seed in the Mid-Plains League tournament here in a couple of weeks.

However, the Brigade will face the A’s along with Sabetha who is also near the top of the standings this week along with single games versus Kansas City on Monday and Topeka on Thursday. A strong showing in this final week would guarantee the Brigade a top spot and home field advantage throughout the tournament.

“We just need to keep doing what we’re doing and keep having fun and it’ll happen,” Steward said.

Unlike the MLB All-Star team where you’re only guaranteed one spot per team, each team in the Mid-Plains League is given nine spots on either the East or West roster

“I think all six of our position guys and our three pitchers are really good,” Bachar said. “Honestly, we probably have more guys that probably belong in the game.”

For the players, a berth in the all-star game exemplifies the effort they’ve put in over the last month and a half and nearly 30 games.

“That was really my only goal this season,” Steward said. “I wanted to play good enough to get chosen for the All-Star team and it worked out.”

Joining those nine will be Garrett Redden who will be competing in the Home Run Derby. After Saturday’s win over Baldwin City, Redden said this will not be his first derby that he’s competed in and has a strategy for success.

“I’m just going to try and relax and get some backspin on the baseball because if you can get that going over the middle of the field, it’ll travel,” Redden said. “I’m pretty confident, I feel pretty good about it.”

The game and the derby will be held on Saturday at Rathert Field.