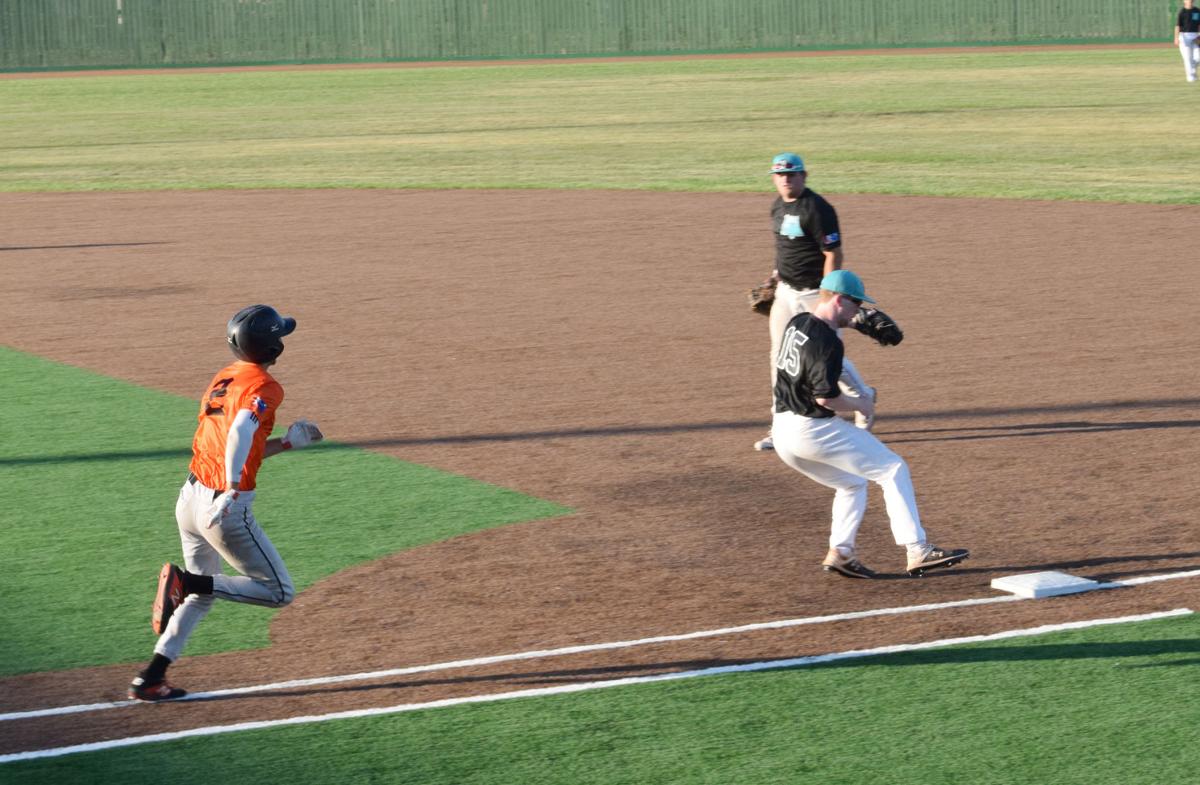 JC's Carson Sader runs up the first base line Friday night against the Liberty Monarchs. 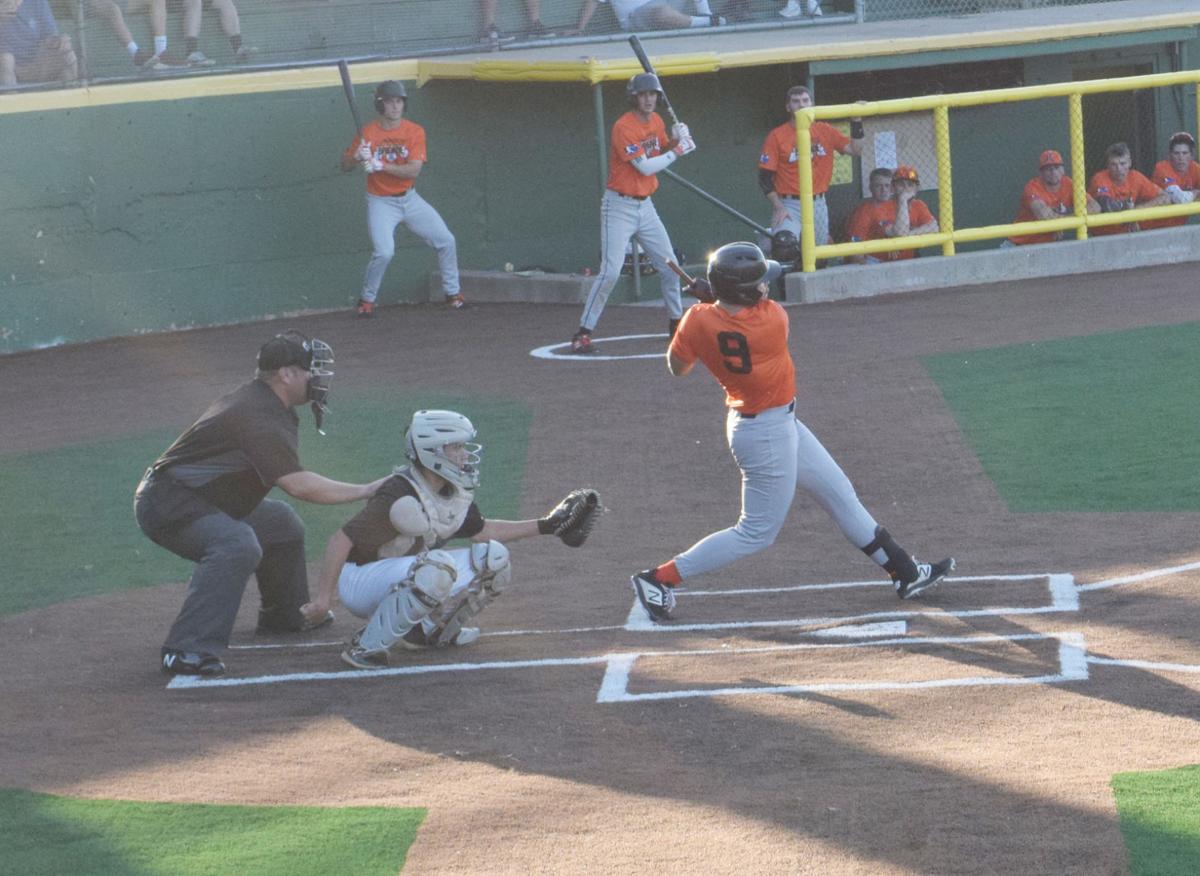 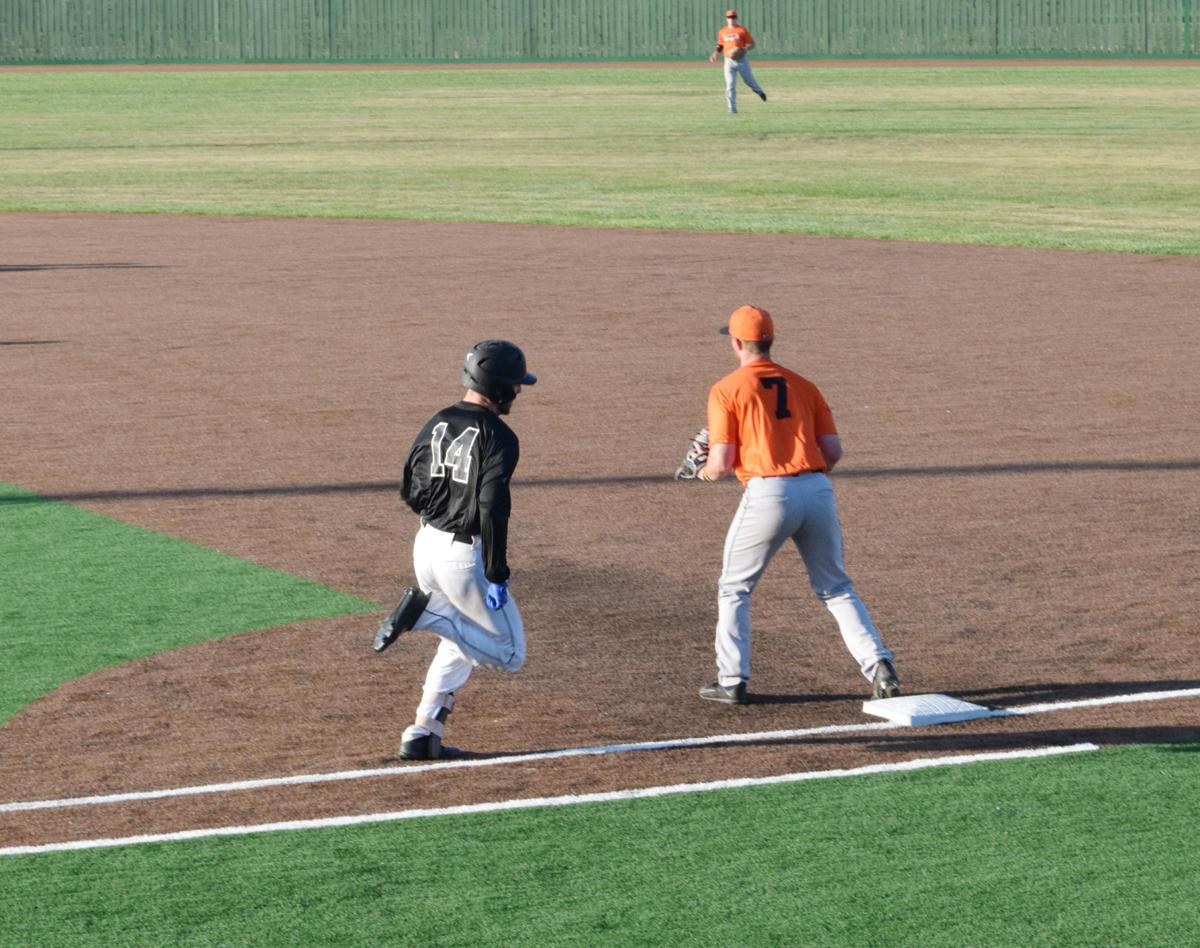 After the Junction City Brigade offense exploded for 20 runs in its last outing, the pitching took center stage in Friday night’s win over the visiting Liberty Monarchs. JC pitchers Riley and Jacob Taylor combined for a shutout in front of a well-engaged Junction City crowd at Rathert Field.

In multiple games this season, JC coach Derek Francis has dug deep into the bullpen, using a lot of arms in one game. But in this one, two got the job done, and Francis talked about what a bonus that was.

“The pitching was really good tonight; it’s always a luxury when you only use two guys,” Francis said. “I thought Riley Taylor was really good tonight, our Oklahoma State University guy. That’s back-to-back Fridays that he’s been good in front of a good crowd. He gave us six strong innings; his pitch count got up just a little bit towards the end. He filled up the zone all night, only had one hiccup all night where it was bases loaded and he managed to get out of it.”

After the six shutout innings by Riley Taylor, in came Jacob to finish what Riley started. Francis is still learning about Jacob as a person and as a player, but his performance Friday night left a good impression. He worked himself out of a jam in the eighth inning with runners on first and third, getting a groundout for the third out. Then, once again, he had a bases loaded situation with two out in the ninth and struck the final batter out.

“It was good to see him get out there and throw three good innings for us,” Francis said. “He got a little tired there at the end, but that’s part of it. It’s starting to get warm out here; guys really have to take care of their bodies.”

The pitchers were on cue, but so was the defense behind them. This is no surprise to Francis though. Francis has players on the field at 4 p.m., with the position players putting emphasis on working on defense. Francis feels the more they practice, when the games come around, it will all feel like second nature to them. With the time and work put into their craft, Francis feels the stellar defensive play will continue to go smoothly.

“The defense was good tonight, and it’s really been good all summer,” Francis said. “I don’t know if it’s just the turf here, but we’ve been good on the natural fields too on the road. Carson Zenger had a really good play up the middle where it was a deflection off Riley Taylor’s glove on a ground ball and he was able to barehand it and get the guy at first. Then we had the play at the plate where we handled the baseball and got him out pretty easily at the plate. The thing I really liked was Dylan Thurber, our catcher, made the play and looked up right away and had a play at third. But the guy just slid in under it.”

With the defense holding up its side of the bargain, the offense didn’t need to do much to take the win. But, it helped plenty. Ed Scott hit a home run to left-centerfield in the bottom of the fifth inning to put JC up 2-0, and Trae McDaniel had an RBI-groundout three batters later to put JC up by three runs. Two sacrifice flies in the seventh inning built the lead to 5-0. JC put up six runs total en route to a 6-0 victory. It was a complete effort on both sides, a rarity in baseball according to Francis.

With continued positive results from pitchers and hitters, Francis is optimistic about this summer moving forward, with the Brigade now at 4-1 on the season.

“It’s always good when you can hit and pitch in the same game,” Francis said. “A lot of times it doesn’t unfold like that. But tonight, I thought it was a really good offensive performance from us. We were making loud outs early where we were getting really good swings off and were just hitting them to people. That’s the way baseball works. Personally, I think we have a pretty scary lineup and I think our arms are pretty good on the mound. So if we can get those things to match up, I think we have a chance to be pretty successful. It’s not going to match up every time; sometimes you’re going to really hit and other times you’re going to really pitch. But if they do match up throughout the summer, I like the way it’s going to look.”