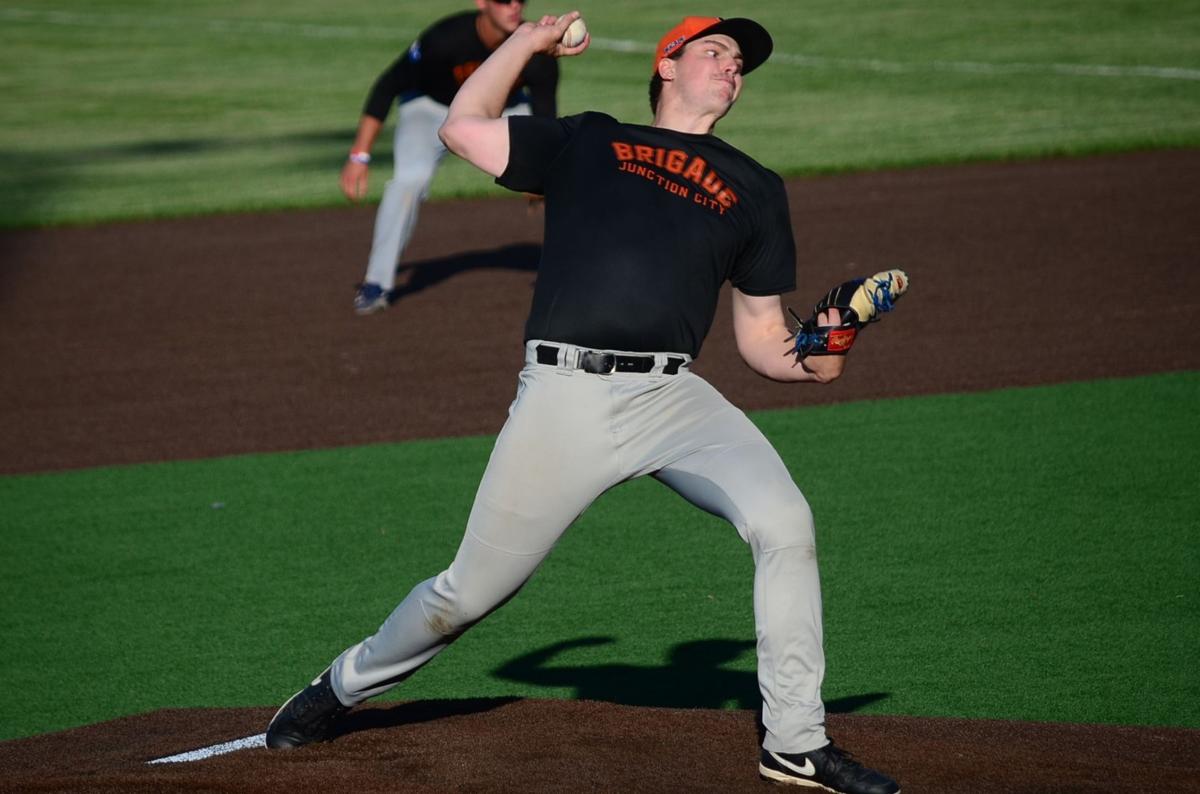 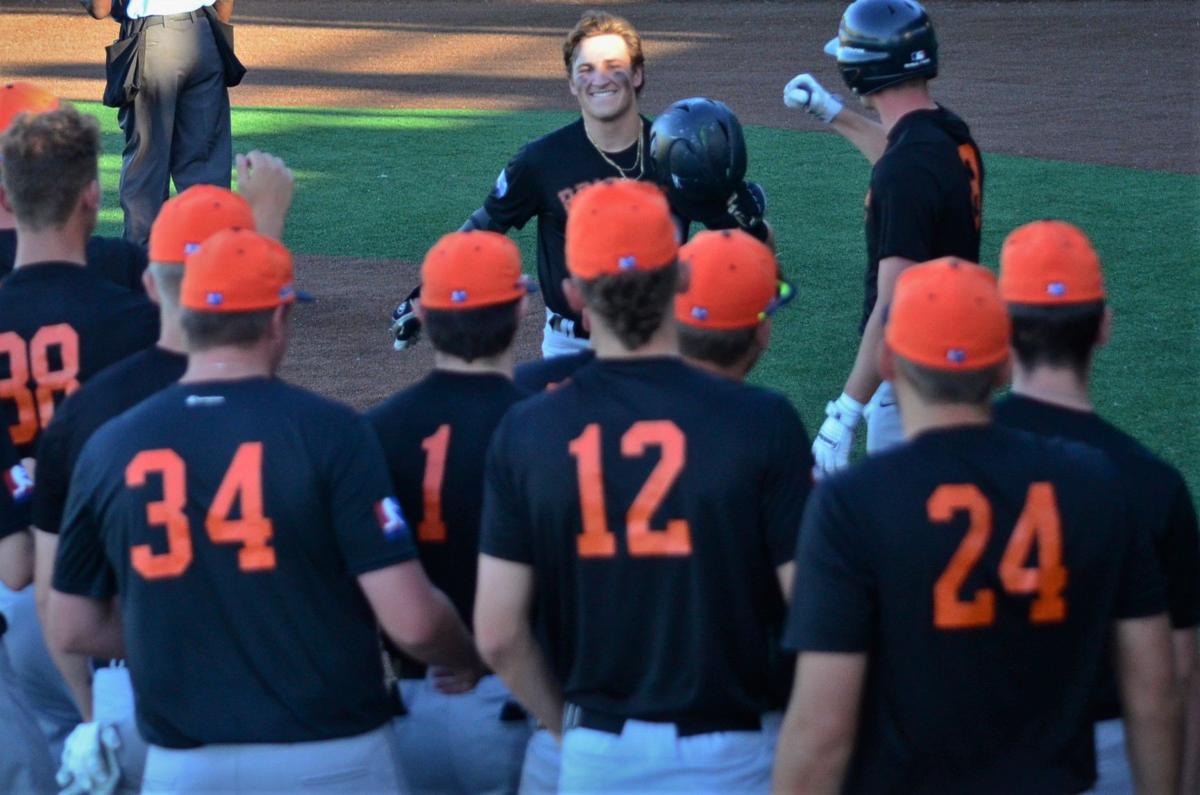 Left fielder Jace Essig celebrates with his teammates after hitting a home run over the left field fence in Friday’s home opening 11-3 win over Baldwin City. 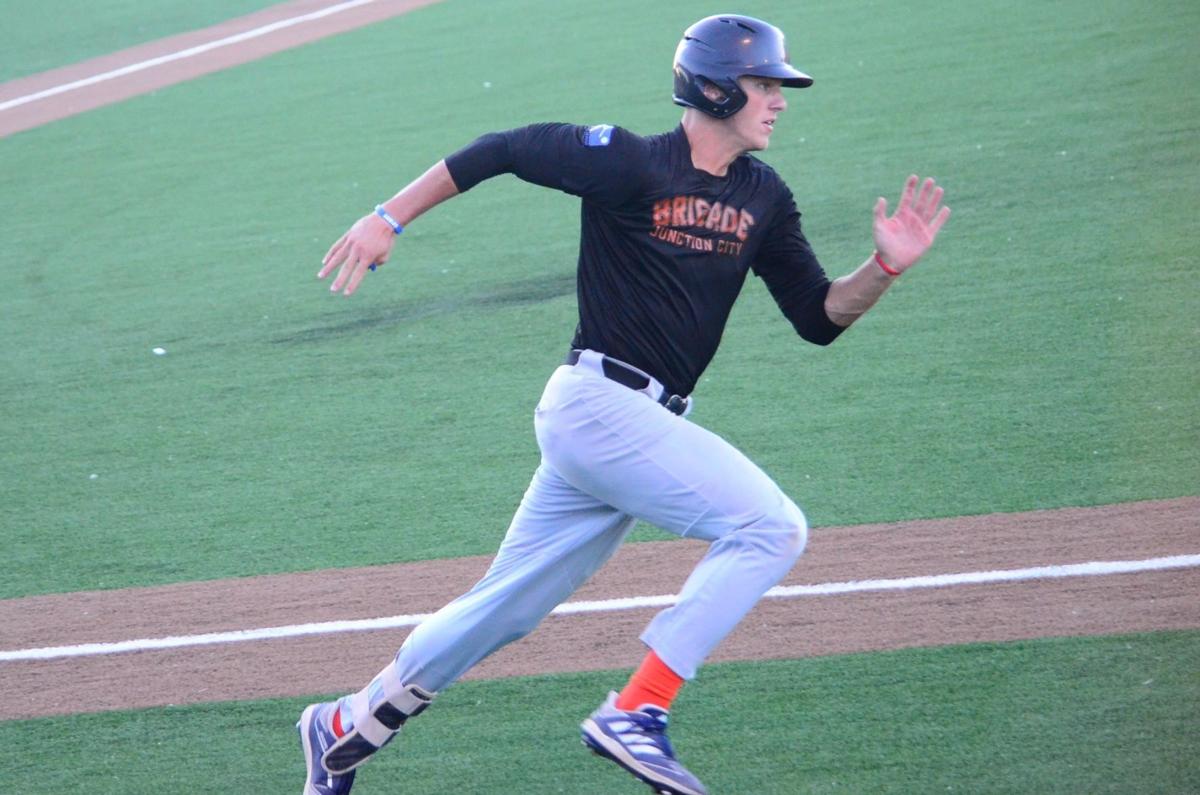 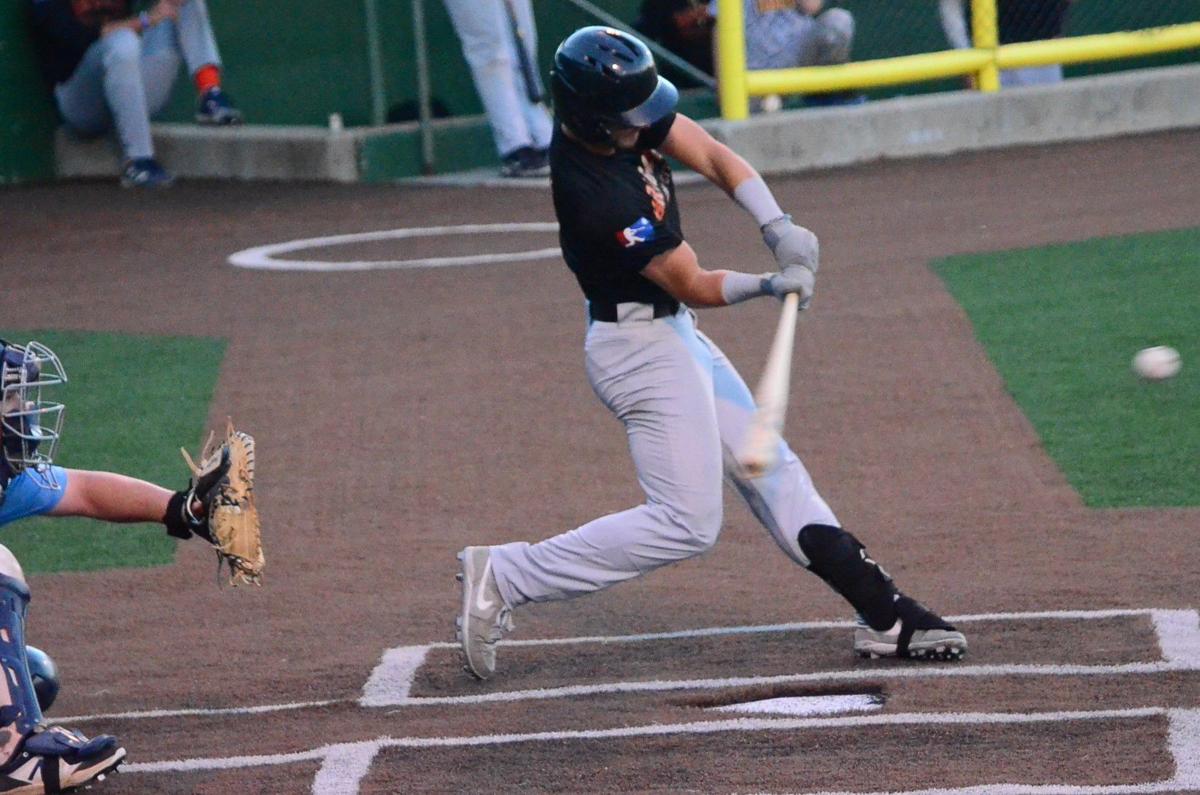 Short stop Kademon Graff swings at a pitch during the Junction City Brigade’s 11-3 home-opening win over Baldwin City on Friday at Rathert Stadium.

Left fielder Jace Essig celebrates with his teammates after hitting a home run over the left field fence in Friday’s home opening 11-3 win over Baldwin City.

Short stop Kademon Graff swings at a pitch during the Junction City Brigade’s 11-3 home-opening win over Baldwin City on Friday at Rathert Stadium.

Fireworks illuminated Rathert Stadium for the first time in two years Friday night marking the return of Mid-Plains League baseball to Junction City as the Brigade blew past Baldwin in their home opener, 11-3.

The Brigade (1-2) opened the season with 5-3 loss at Baldwin City the day before but a hot start and steady pitching were enough to grab them the win.

“Yesterday, you could tell that we were having good at-bats and it seemed like guys might’ve started to feel a little pressure,” head coach Brandon Bachar said. “We started pressing and we left a lot of guys on base and tonight it was the complete opposite. We got ahead early and I think that helped a lot.”

Despite the gaudy offensive numbers, it was pitcher Kody Jones who cemented the win for the Brigade, going five innings, allowing no runs on just two hits and two walks.

“I was a little out of shape so I only got to go five and I always get the butterflies a little bit when I pitch but I think it helps me out,” Jones said. “I was just happy to get my new home and my new family a win and I’m excited for more to come.”

Jones got into a groove early on, dominating the Blues with his power and flexing his fastball more and more as the Brigade lead grew around him.

“It’s amazing,” Jones said. “You can just go out and pitch freely. You can get ahead in the count and challenge them because you know you’re up so if you give up a run it’s not that big of a deal.”

The Brigade exploded with a four-run second inning powered in part by a two-run home run from shortstop Jace Essig that sailed over the left field fence.

The homer was the first of two after Thomas Beiswagner sent one out in the fifth inning.

“We’ve seen (the hitting power) in batting practice but obviously you guys haven’t yet so that was awesome,” Bachar said.

The Brigade lead stretched to 10-0 before the Blues managed to get on the board with two runs in the top of the sixth off reliever Brian Bruxvoort. After that, Bruxvoort went on to retire seven straight through the eighth inning before Austin Gerety came in to close things out.

Essig led the way offensively with two hits on four tries with a home run, a single and four RBI along with Kade Graff who went one for three with a triple, a walk and three RBI.

The Blue Jays will host the Topeka Golden Giants (1-3) on Tuesday before traveling to Topeka on Wednesday to finish out the series.

The Brigade were blanked through the first six innings of their season opener at Baldwin on Thursday before a Graff double in the top of the seventh scored Essig and Grant Howard to cut Baldwin City’s lead to 4-2.

Garrett Redden scored on an error in the top of the eighth to cut the Blues lead to a run but a wild pitch in the bottom of the inning pushed Baldwin City’s lead back to two.

Junction City’s opening two batters walked on in the top of the ninth but two strikeouts and a fly out ended the inning and the game with a 5-3 loss for the Brigade.

Graff was the lone Brigade player to have a multi-hit game with two and Beiswagner reached base on a walk in three of his at-bats.

Tristan Wolf earned the loss in his first start of the season, going six innings and allowing four runs on six hits with five strikeouts and a home run.

A four-run bottom of the ninth led to a walk-off 15-14 win for Baldwin City on Saturday after Junction City led 11-7 heading into the bottom of the eighth inning.

After the Brigade retook a 14-11 lead in the top of the ninth off a Gerety single scored Price Allman and Dalton Nelson and an error several batters later that scored Gerety.

In the bottom of the ninth, Baldwin City loaded the bases on a walk, a single and an error which led to runs scored off a bases-loaded hit-by-pitch and walk. The Blues tied things up at 14 off a single and then got the win on the next play on a fly ball to left field.

Allman and Essig led all Junction City batters with three hits and Gerety had two.

Casey Steward got the start and went four innings, allowing four runs on five hits with five strikeouts. Chandler Young came in for the next three innings and gave up three runs on two hits and four walks with three strikeouts and a home run. William Rosenow came in for the bottom of the eighth and allowed four runs on three hits and a walk without recording an out leading Drake Sisemore to close out the eighth but give up the winning runs in the bottom of the ninth, three earned on three hits and two walks with two strikeouts, to end the night.