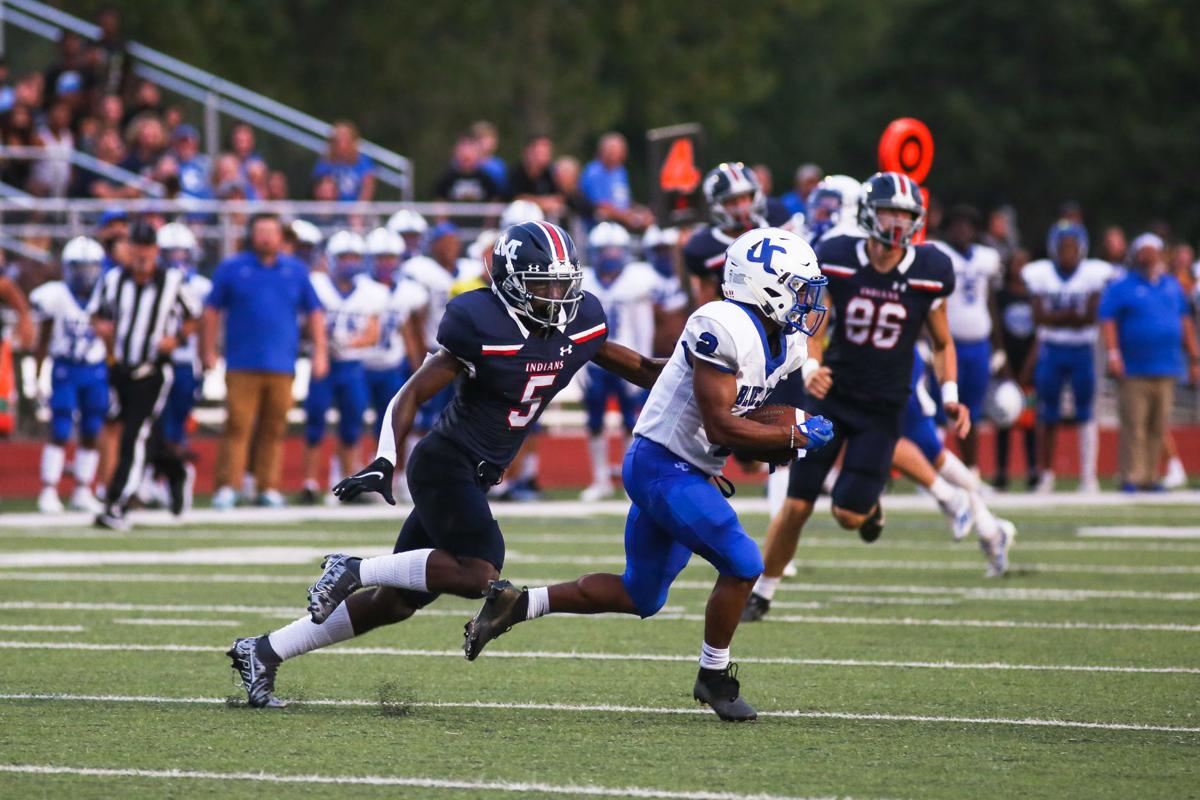 Junction City running back T.J. Smith blazes across the field at Bishop Stadium in Manhattan during the Blue Jays 37-21 road loss. Smith had over 100 yards receiving the loss. 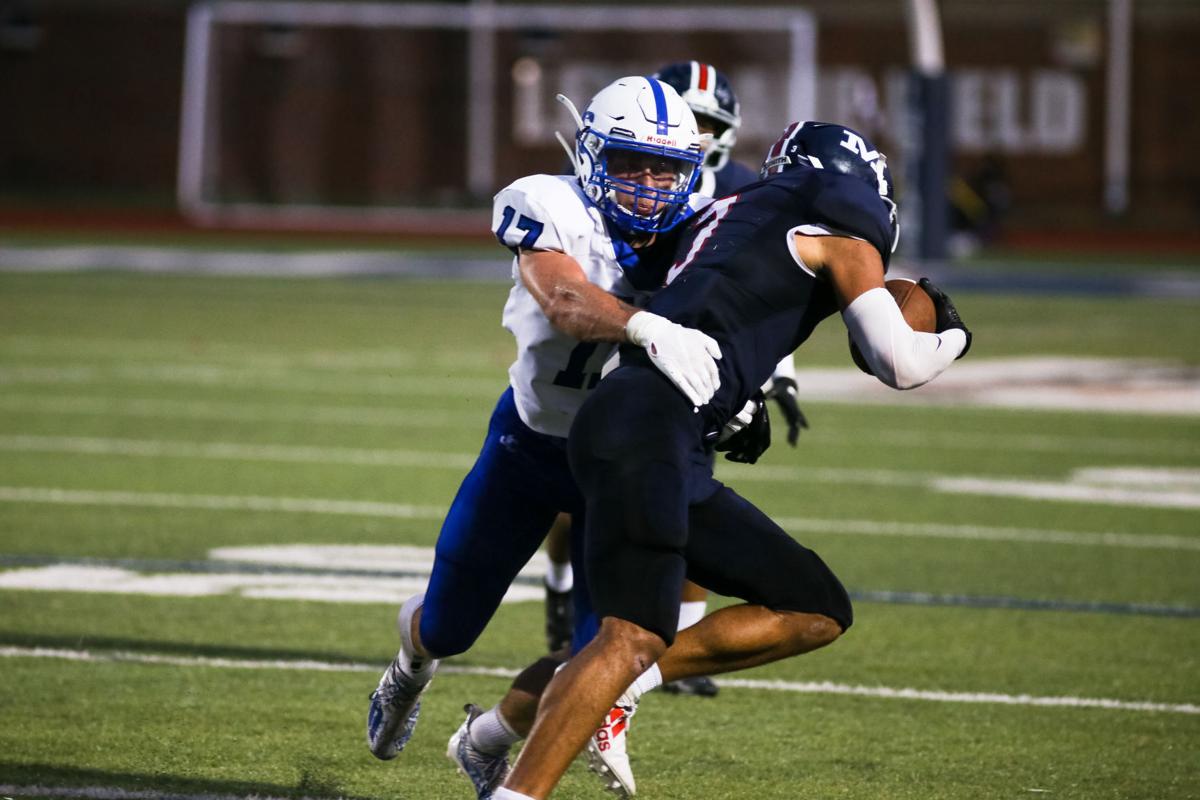 Manhattan High’s Joe Hall (3) is tackled by a Junction City linebacker Keghan McConnell during the Blue Jays 37-21 loss in Manhattan on Friday.

Junction City running back T.J. Smith blazes across the field at Bishop Stadium in Manhattan during the Blue Jays 37-21 road loss. Smith had over 100 yards receiving the loss.

Manhattan High’s Joe Hall (3) is tackled by a Junction City linebacker Keghan McConnell during the Blue Jays 37-21 loss in Manhattan on Friday.

Down 30-21, Junction City got a spark and a huge opportunity to score with an interception. It was exactly what the Blue Jays needed to get in the fourth quarter to stage a comeback.

But, with 7:13 remaining, quarterback Xavion Felton scrambled out of the pocket and tried to make a big play deep into Manhattan territory. He had an open receiver, but his throw came up short and fell right into the hands of an Indian defender for an interception, sealing the game for Manhattan.

“That is a tough ball game,” Junction City head coach Randall Zimmerman said. “You turn the ball over five times in really critical situations. Special teams was not very good tonight. We just were not very good. Our inexperience showed up so big tonight. I got to do better. I did not coach a good week of practice. I obviously did not coach a good (game). Manhattan is really good (and) really physical.”

Quarterback David Rowell started the game for the Blue Jays, but he only played in the first half due to injury.

Rowell began the turnovers in the game for Junction City on the first possession of the game as he lost a fumble that Manhattan recovered.

Manhattan (2-0) marched down the field and turned that possession into a touchdown.

Junction City responded its following possession as Rowell showed off his talented arm as he found running back T.J. Jones wide open past the Manhattan secondary for a 45-yard touchdown pass to tie the game.

Manhattan responded right back the following position with another touchdown to get back on top with a 14-7 lead.

Junction City still had its offense going strong on its next possession, but a dropped catch on second down put the Blue Jays in a third-and-long, and Manhattan was able to get the third down-stop and get the ball back.

The Blue Jays got the ball back again, but another mistake happened: the visitors decided to run a swing pass play in an attempt for a big play. Rowell threw the ball to Jones on a short pass to the near side of the field, and Jones had an open receiver, but the ball slipped out of his hands and it turned into a fumble and Manhattan recovered, giving them the ball at Junction City’s 12-yard line.

It set up an easy drive for Manhattan to score on a running play on fourth down from inside the five-yard line to push the lead to 21-7.

The Blue Jays were able to get a touchdown on a four-yard run from Rowell to make it a 21-14 game, and a 42-yard field goal for Manhattan made it a two-possession lead, 24-14, at halftime.

“We go into halftime, we (had) three turnovers,” Zimmerman said. “(We) gave them the short field to start the game. Just little things like that. We were not playing very well. Defensively, we were not tackling well.”

Because of Rowell’s injury, Xavion Felton played at quarterbackin the second half but offensive rhythm was not sustained from the first half thanks in part to two key interceptions.

That big play gave the Blue Jays momentum, and with the first two plays of Manhattan’s next possession being losses of yards, they needed a stop to get the ball back with the momentum they had just gained. But Manhattan quarterback Keenan Schartz found running back Vinny Smith for a 18-yard completion to keep the drive alive for Manhattan with 11 minutes remaining.

Manhattan got a few more first downs on the drive until Junction City was able to come up with a big play on defense with an interception, returning the ball to its own 46-yard line giving the Blue Jays their last big chance to stage a comeback with 7:13 remaining.

“It was big,” Zimmerman said. “Anytime you can create a turnover defensively. Our defense turned them over a little bit. We had three in the second half. We just couldn’t get anything going offensively.”

The Blue Jays were able to force a fumble to get the ball back later in the fourth quarter, but both turnovers were followed up with an interception by Felton.

The Blue Jays gave themselves chances to win, but the turnovers were just too costly to overcome.

“I really believe that,” Zimmerman said. “We were moving the ball. It is just….. you can not give (the ball) back to them. I like our kids, (and) we are going to regroup and get after it. I walk off the field saying we were good enough tonight (to win), we just have to do the little things right.”

The Blue Jays will head back to Topeka on Friday to try to recapture the offensive magic from week one where they will take on a very good Topeka Seaman team (2-0).