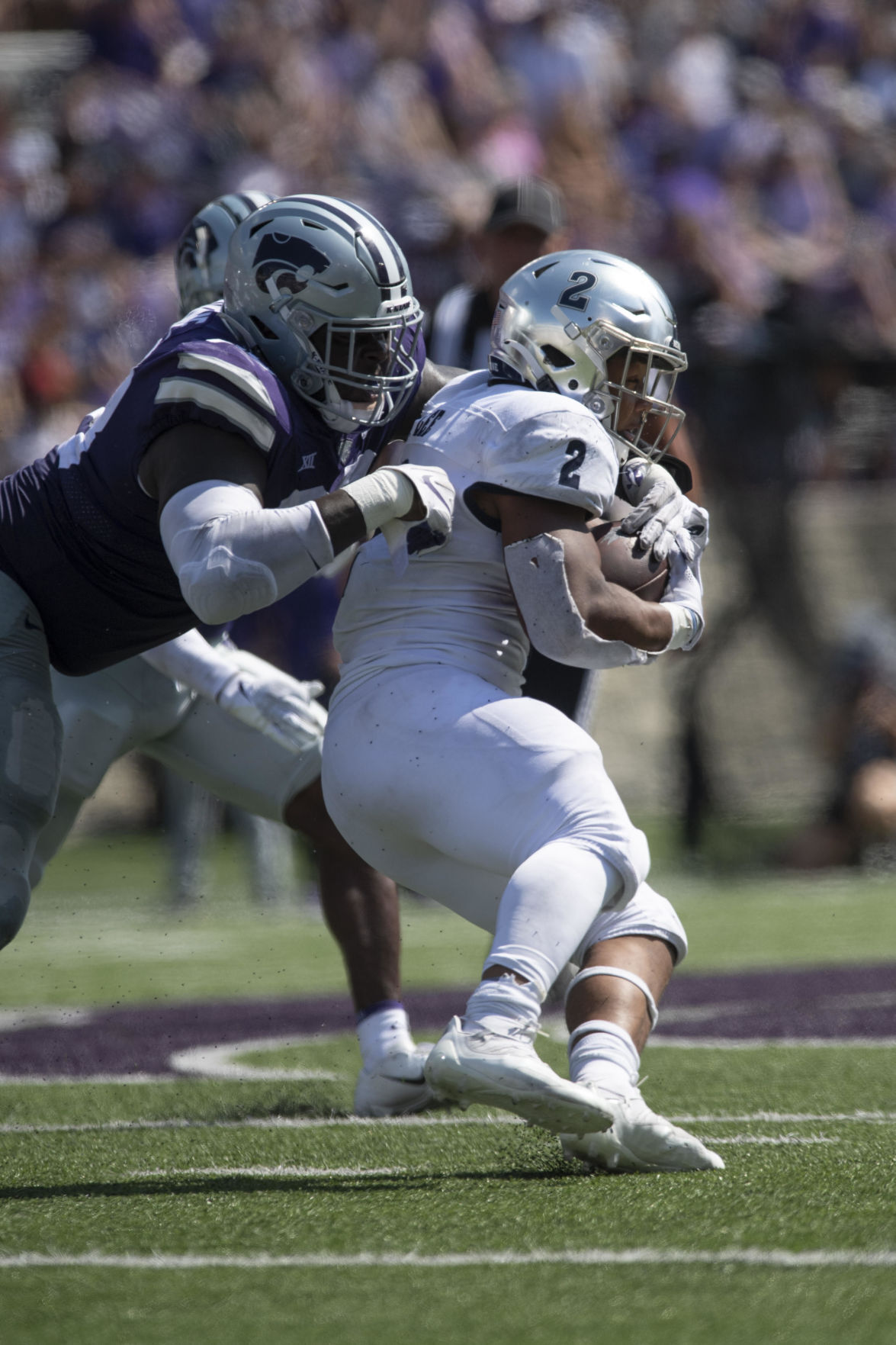 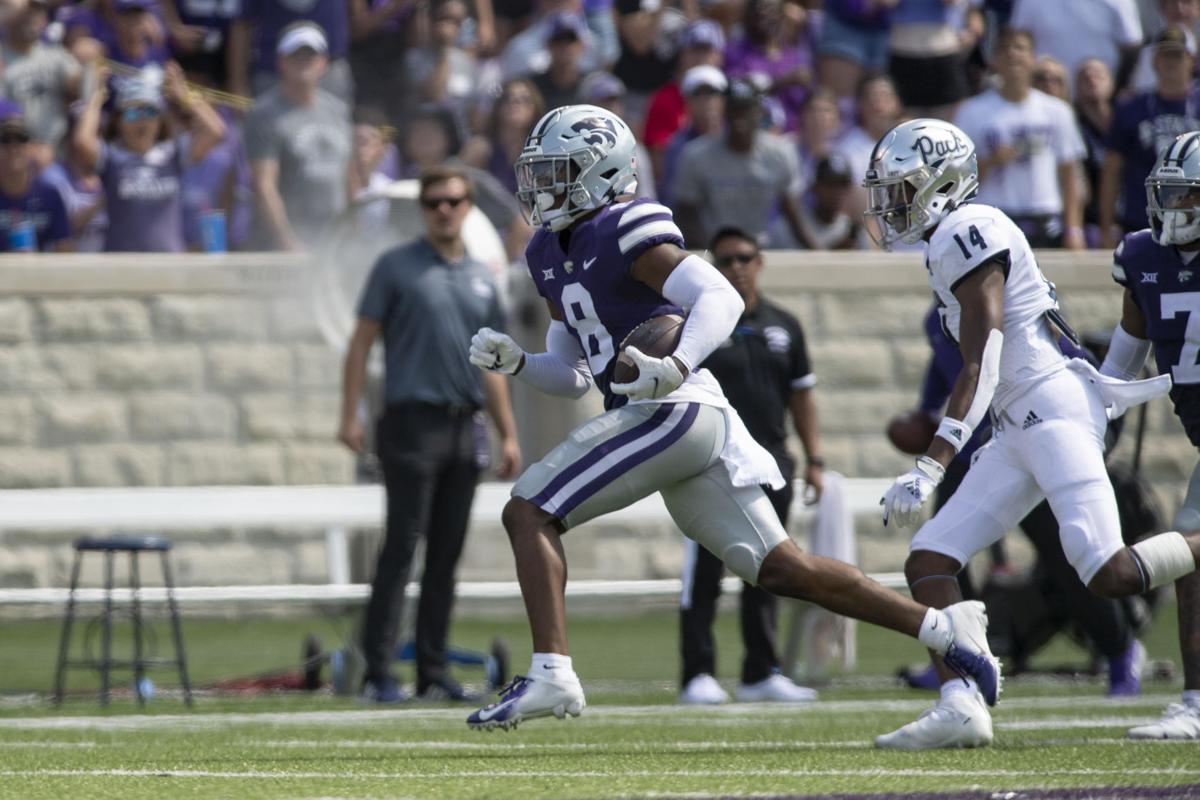 Tee Denson runs after catching an interception in Saturday afternoon’s 38-17 win over Nevada at Bill Snyder Family Stadium. The pick was Denson’s first of his career.

Tee Denson runs after catching an interception in Saturday afternoon’s 38-17 win over Nevada at Bill Snyder Family Stadium. The pick was Denson’s first of his career.

Word reached Kansas State’s defense that a cadre of NFL scouts would be in attendance ahead of Saturday’s game versus Nevada.

It was assumed the 12 scouts came to evaluate the Wolf Pack’s star junior quarterback, Carson Strong.

The Wildcat defense had other ideas, leading K-State to a 38-17 win while keeping Strong, a first-round talent according to multiple NFL mock drafts, in check through most of the game.

“It was a big opportunity,” sophomore Tee Denson said after the win. “(The scouts) came here to see (Strong) but why not give them a reason to check you out as well?”

If those scouts weren’t aware of Denson before Saturday, they certainly were after the sophomore snagged a pick in the second quarter and returned it 26 yards, setting the Wildcats up for a field goal near the end of the half.

The interception was Denson’s first as a Wildcat and was the second Strong has thrown this season.

“I was so happy for Tee because of how much he cares about the team,” fellow defensive back Reggie Stubblefield said. “He’s such a team first player. For him to get his first interception in this stadium, I was just so excited for him. … I felt like I caught the pick, honestly. That’s the type of team that we are this year: everybody’s happy for each other. That’s what it takes and that’s what we’re doing.”

Stubblefield had a big moment of his own just two plays earlier. The senior transfer from Prairie View A&M blitzed and ran right past a Nevada guard, bringing Strong to the turf for the first of K-State’s three sacks on the day.

Both the interception and the sack partially were a result of the K-State defense identifying what they viewed as one of Strong’s glaring weaknesses.

“We put a couple of disguises in because, honestly, Strong couldn’t read defenses too well. So we kind of baited him into doing some things,” Stubblefield said. “I also knew their guards were kind of slow, so beating them with speed was kind of my focus.”

“And I’ve got to shout out my offensive scout team, because it’s hard to get inside when you’re not used to it. So I was talking to the scout team guards all week about how to get around guards, and they gave me a couple of pass-rush moves to work on. Practicing like you play is the key, so it’s crazy how what we talk about in practice translates into games.”

After a couple of near misses throughout the first half, junior middle linebacker Daniel Green got the second K-State sack on Nevada’s opening drive of the second half.

“When we as a defense have a challenge in front of us, we take that personally,” Green said. “We had to go out there and really execute, and I feel like the coaches had a good game plan and we played well.”

At the beginning of the fourth quarter, K-State scored the first of three touchdowns of the period to retake the lead at 24-17.

Nevada and head coach Jay Norvell faced with a fourth-and-4 decision at K-State’s 41. The Wolf Pack decided to roll the dice, and after two incompletions Strong, a quarterback not known for his mobility, attempted to pick up the first down with his legs.

He came close but freshman defensive end Nate Matlack — who was in the game after senior Khalid Duke went down with an undisclosed injury in the first half — dragged Strong to the ground a yard short of the line to gain, giving the ball back to the K-State offense.

Matlack shined again on the last play of the game, sacking Strong for an 8-yard loss as the final seconds ticked down.

Despite being held at bay, Strong didn’t have an entirely unimpressive day. The junior went 27-for-40 for 262 yards while uncorking several big-time throws including a 55-yard bomb that set up a touchdown in the first quarter.

“Honestly we treat every game the same, with the same mentality and the same focus,” Stubblefield said. “I play every game like it’s my last, so I wasn’t worried about (Strong’s) name or the team he played for. Every game is an opportunity to go out there with my team and prove to the world and to the nation what we stand on, and that’s our core values and our mob mentality.”

Nevada came into the game with a running attack that wasn’t overpowering, but still averaged nearly five yards per carry. On Saturday, the Wolf Pack weren’t nearly that efficient, as the K-State front seven held the visitors to just 25 yards on 23 carries.

“We just want to dominate,” senior defensive tackle Timmy Horne said. “Going into each game, we always want to dominate the line of scrimmage. We come in with a mentality that all of us up front can’t be blocked. We have that dog mentality.”

But, stats and positive on-field results aside, the most important aspect of Saturday’s victory for the K-State defense was that it affirmed a belief that’s driven the Wildcats throughout the offseason and through their 3-0 start.

“We’re finally getting a chance to show the world this is who we are,” Denson said. “We’re not like last year’s defense, we’re not like the defense two years ago. This is K-State 2021 defense, the Mob. We just want to show people each and every week that we can come out and play no matter what.”