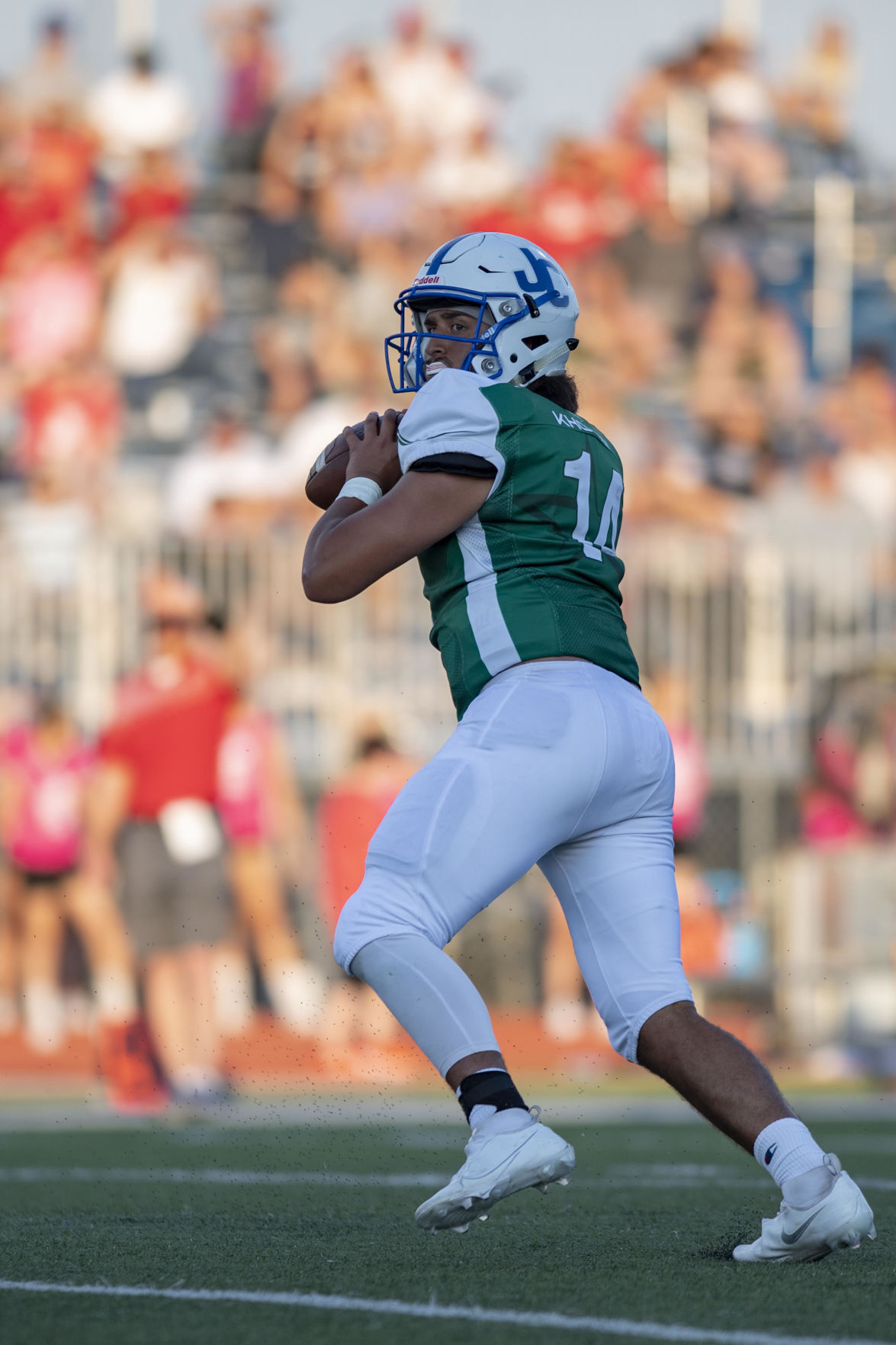 Andrew Khoury prepares to pass Saturday evening in the 2021 Shrine Bowl at Gowans Stadium in Hutchinson. 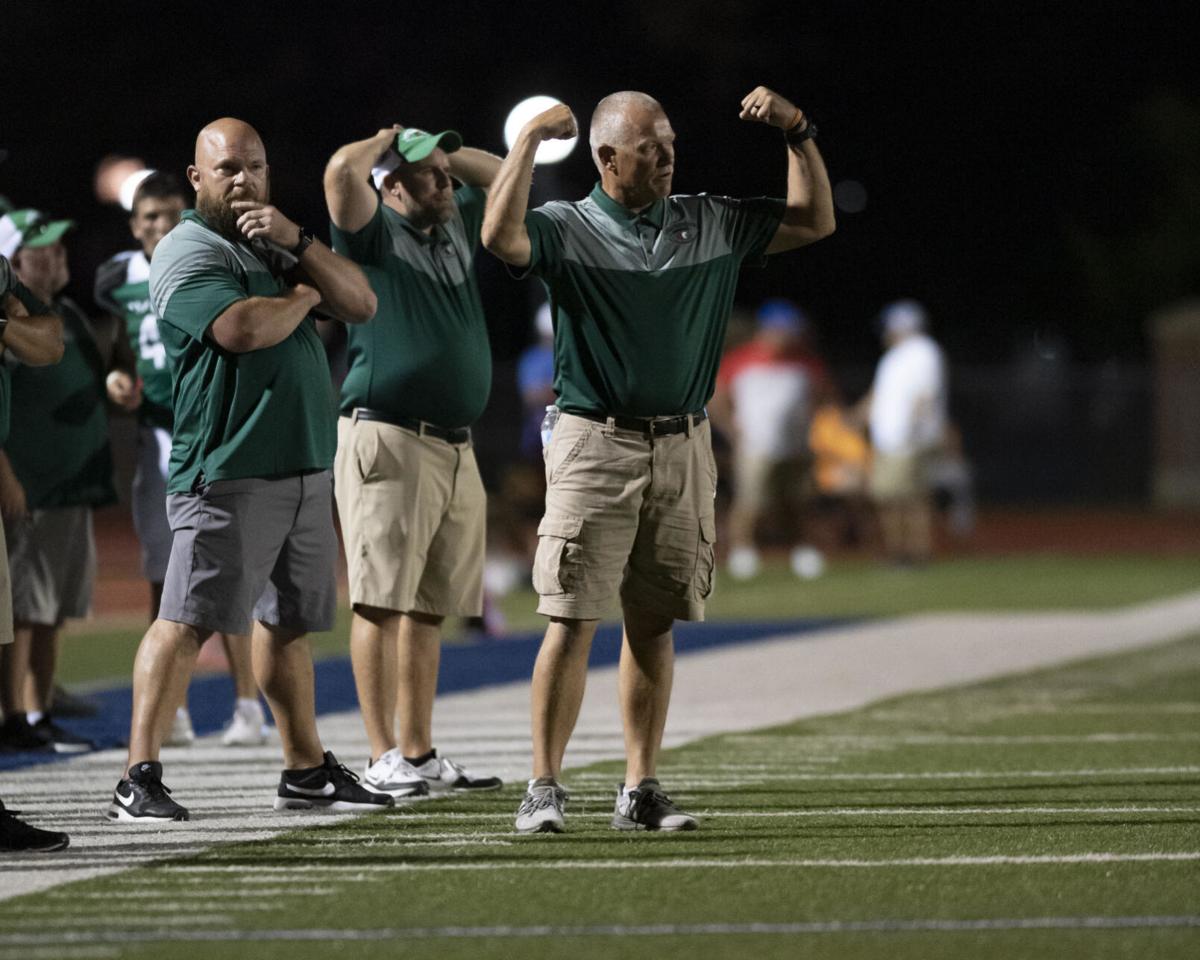 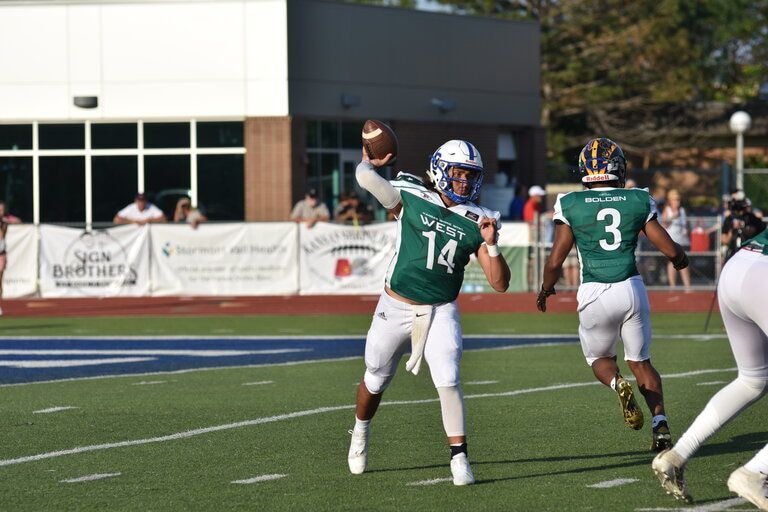 Andrew Khoury throws a pass during the 2021 Shrine Bowl at Gowans Stadium in Hutchinson on Saturday.

Andrew Khoury prepares to pass Saturday evening in the 2021 Shrine Bowl at Gowans Stadium in Hutchinson.

Andrew Khoury throws a pass during the 2021 Shrine Bowl at Gowans Stadium in Hutchinson on Saturday.

The process started with a week of practice at Bethany College in Lindsborg where members of the West All-Star team, of which Khoury was the quarterback for and Zimmerman an assistant coach, practiced and got to know one another.

“It was a really tough week honestly,” Khoury said. “We got to Bethany on Sunday and right away we had two practices and then Monday, Tuesday and Wednesday we had three practices a day so all of our bodies were super tired. But overall it was a fun experience. I got to meet a lot of new players and I got to play with people I used to play against.”

As the week went on, Khoury really felt he built a bond with the best players in this half of the state as everything led up to Saturday’s Shrine Bowl at Gowans Stadium in Hutchinson on Saturday.

“I just tried to make the team bond as close as I could and by the end of the week I felt like we were pretty close,” Khoury said. “Everyone was a little shy coming into the week but after that we all just felt like family. We just bonded like no other.”

The game was a defensive battle but Khoury still got opportunities to show off his skills starting with a 59-yard touchdown pass to Phillipsburg’s Ty Sides with 9:07 to play in the first quarter to give the West an early 7-0 lead.

The West defense was stalwart, shutting the East out of all four quarters while Clearwater’s Tanner Cash ran one in from six yards with four minutes to play in the fourth quarter out to push their lead to 14, securing the West’s win.

Khoury ended the day going 9-18 for 157 yards with a touchdown and an interception.

“It was probably one of the hardest games that I’ve ever played because everybody is the best at what they do,” Khoury said. “Everyone did a great job on our team. Our defense was really strong and didn’t allow any big plays, our offensive line did a great job giving us time and then our running backs and receivers did a great job getting open. It made my job easy.”

While the game was good, the whole experience had a little more significance to Khoury both personal and not. The game raises money for the network of 22 Shriners Hospitals for Children and their patients and throughout the week, players get opportunities to hear the stories of the kids who are helped by Shriners Hospitals. Khoury said this was his favorite part of the week.

The Shrine Bowl experience also helped him realize that he’s not quite done with the game of football. Khoury, who ended his high school career as the leading passer in school history, threw for over 3100 yards last season leading the Blue Jays to a 9-2 record and a berth in the sub-state championship game.

Before last week, Khoury was planning on enrolling at the University of Kansas as a non-student athlete but now he’s not so sure.

“I think this week really changed my opinion a lot and it really showed the love for football that I have,” Khoury said. “So I just want to keep my recruitment open for the rest of the summer and see if the right place pops up.”

Khoury said he’d love to get a chance to suit up for the Jayhawks and new head coach Lance Leipold if they offer but is totally open to other opportunities that come his way that would allow him to keep playing football.