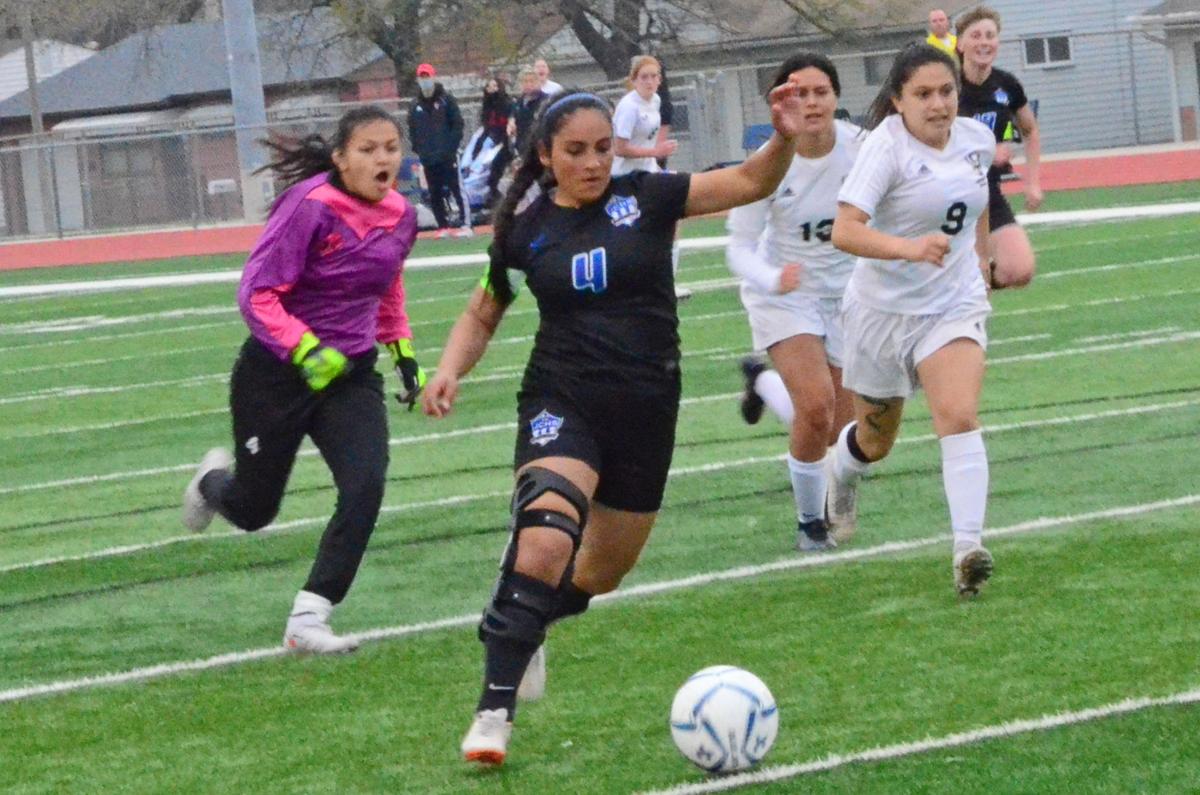 Senior Mindy Lechuga-Nevarez lines-up a wide open goal as Emporia’s goalkeeper trails helplessly behind her in the Lady Jays 1-0 win over the Spartans on Thursday at Simpler Stadium. 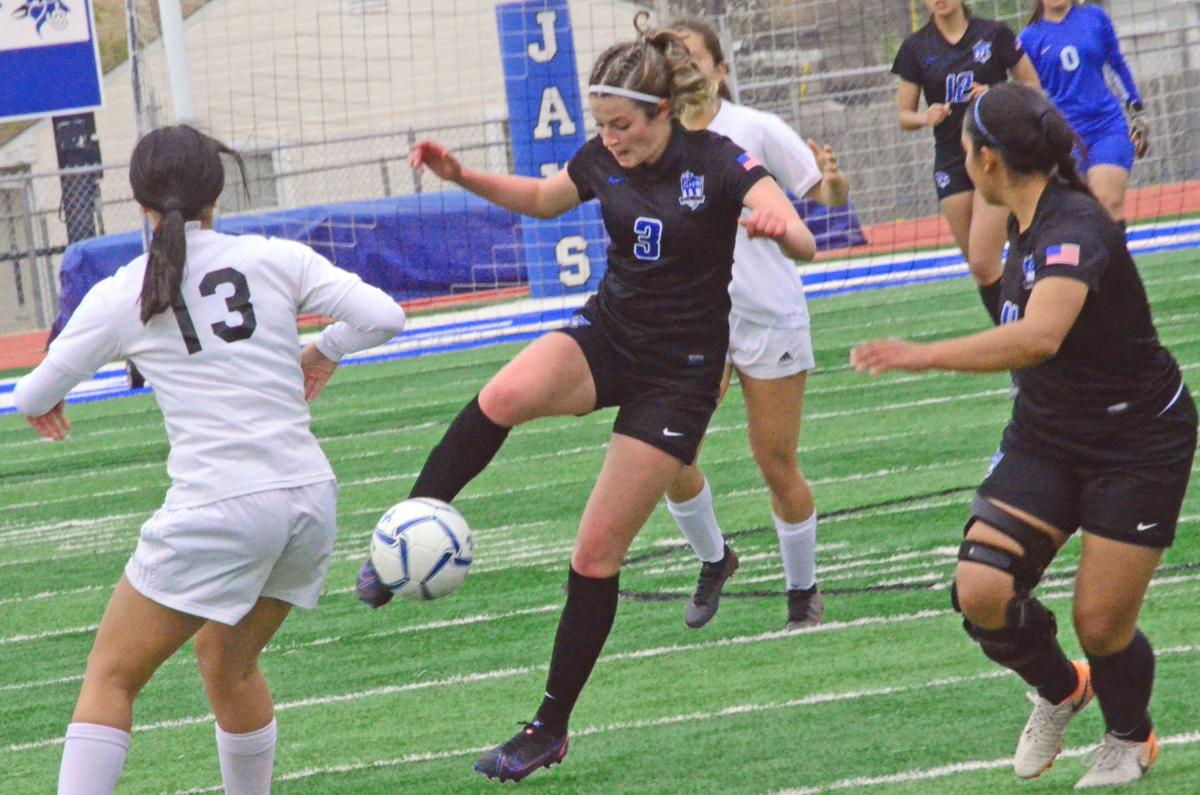 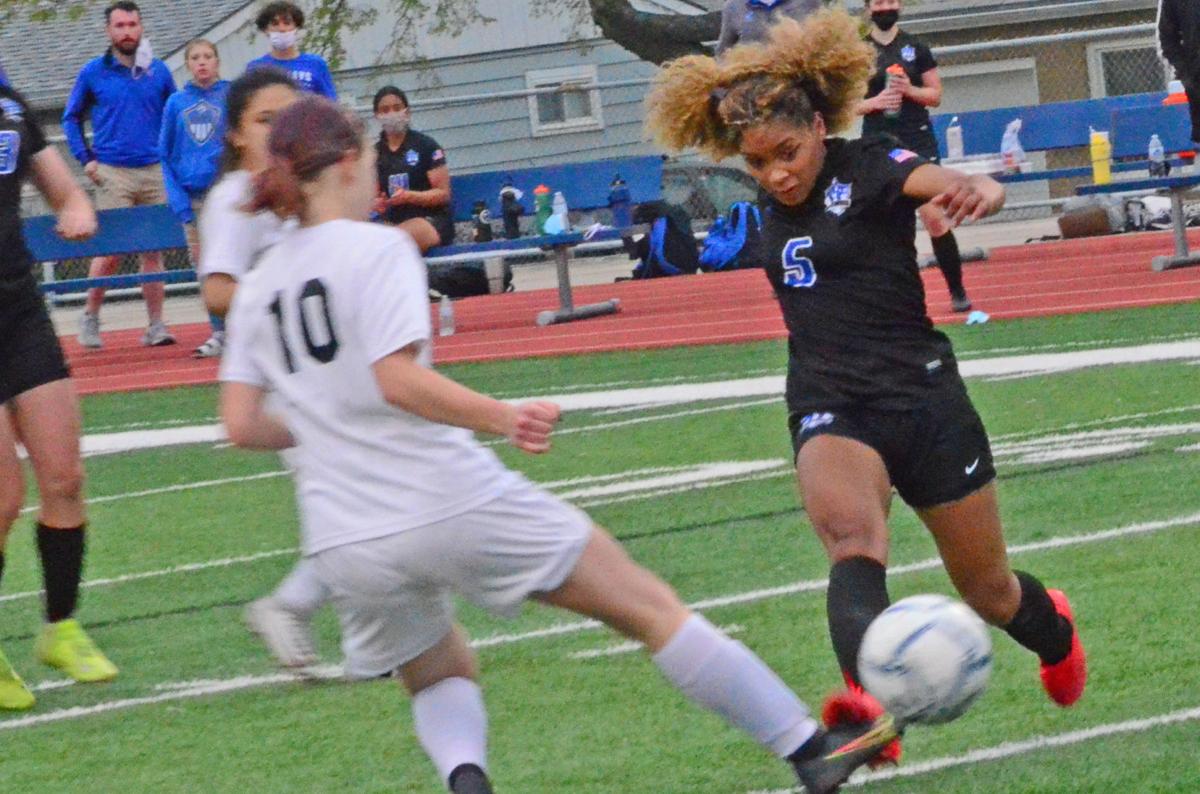 Sophomore Mariah Jackson tries to get around a Emporia defender during the Lady Jays 1-0 win over the Spartans on Thursday at Simpler Stadium.

Senior Mindy Lechuga-Nevarez lines-up a wide open goal as Emporia’s goalkeeper trails helplessly behind her in the Lady Jays 1-0 win over the Spartans on Thursday at Simpler Stadium.

Sophomore Mariah Jackson tries to get around a Emporia defender during the Lady Jays 1-0 win over the Spartans on Thursday at Simpler Stadium.

Cleats discarded, hobbling slightly with a big bag of ice taped over her right knee, Lechuga-Nevarez stood just 20 feet away from where she clanged in the winning goal roughly 40 minutes earlier, less than seven months removed from knee surgery and more than two years removed from the last time she got to play a game in Junction City.

Lechuga-Nevarez tore her ACL and meniscus during basketball season her sophomore year back in 2019 and had to miss her sophomore season of soccer to rehab. She then lost her junior year due to Covid and the first several games of her senior season recovering from the surgery she had to address those sophomore year tears in September.

But now that she’s fully back in the mix for the Lady Jays she’s not only contributing — she’s winning games.

“It’s a testament to her mental fortitude,” head coach Mitchell DeHoff said. “Not a lot of people would have that mental determination to battle back to get yourself ready to play. She’s full of resolve and I haven’t interacted with many people with her work ethic. It’s great to see her playing again.

“She adds a little bit of an edge that we don’t have when she’s not in there. She’s great on the ball. She’ll collect it, she’ll distribute it really well and then, when you put her in front of a goal with a chance to score, she’ll put away more than anyone else on our team.”

She scored her first goal of the season a week before at Topeka West and found paydirt again versus Highland Park. However, she was still adjusting. Emporia posed a challenge as both teams were an even 3-3 heading into the game.

In pregame, coaches encouraged players to set a goal for themselves before stepping onto the field. Despite some success in the first few games she had gotten to play in, Lechuga-Nevarez still didn’t feel like she was playing like her old self, the old self that could confidently fly around the field in command and was consistently a threat to whichever opposing goalkeeper dared to stand in her way. She was still cautious, not ready to fully trust her body.

Her goal: to stop being intimidated.

“I’m not even seven months past my surgery so the way that I used to play and the way that I play now are just very different,” Lechuga-Nevarez said. “I’ve been playing very scared and my goal today was to stop doing that. At the beginning of the game I was still a little intimidated but once I got a little more aggressive I was just like, “okay, let’s go”.”

Defensively, the Lady Jays held Emporia down throughout most of the first half while struggling to get things going offensively themselves.

Junction City started to get some offensive momentum late in the first half and carried that aggressive attitude over into the second half. The Lady Jays got several opportunities to break the 0-0 tie but to no avail until, with a little more than 10 minutes into the, Lechuga-Nevarez struck.

A nifty pass from junior Brooke Swango allowed the senior to get in-between the Emporia goalkeeper and the goal and Lechuga-Nevarez buried her first home goal in over two years to give the Lady Jays a 1-0 advantage.

“I don’t know how to explain it,” Lechuga-Nevarez said. “We were all just connecting really well. I will say that goal never would’ve happened if my teammates weren’t locked in and gotten me that pass.”

The special nature of the moment was not lost on the other players wearing black and blue on the field at that time. Lechuga-Nevarez was immediately mobbed by four of her teammates while others further down the field raised their arms in celebration and screamed into the crisp spring air.

“This program is just so much different than any other program in the school,” Lechuga-Nevarez said. “They just grow on my heart.”

Emporia attempted to rally in the waning minutes but several heads-up saves from sophomore Sophia Holloway and a maintained defensive intensity ensured that Lechuga-Nevarez’s special goal would not be in vain.

“I keep telling this team everyday that our potential is out there,” DeHoff said. “We have the potential to do things that (Junction City) girls’ soccer teams haven’t done in years. We had a couple of really good years under Coach Proctor but since we’ve been down but this team has the potential to keep striving forward and get us back to where we want to be.”